Jordan Vandergriff will make the jump to the professional NHRA Drag Racing ranks in 2019 as the driver of a Bob Vandergriff Racing Top Fuel dragster with primary sponsorship from D-A Lubricant Company and its PennGrade Motor Oil brand .
19 Oct 2018
Posted by NHRA.com staff
News

Jordan Vandergriff will make the jump to the professional NHRA Drag Racing ranks in 2019 as the driver of a Bob Vandergriff Racing Top Fuel dragster. Joining the 23-year-old California native in his rookie season will be D-A Lubricant Company and its PennGrade Motor Oil brand as primary sponsor.

“I’ve been watching my uncle Bob drive since I was a kid,” said Jordan. “He’s been in drag racing for 20-plus years. I remember going to Pomona and Sonoma and just dreaming of driving a race car someday. Now I’m making that dream come true.”

Team owner Bob Vandergriff is ready to pass the baton to the next generation of drivers. 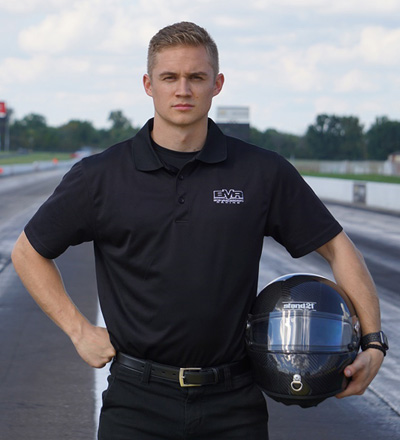 “I am truly excited about our new program with D-A Lubricant Company and the opportunity to put my nephew Jordan behind the wheel of one of BVR’s Top Fuel dragsters,” he said. “It’s long been a dream of his to drive a Top Fuel dragster and being able to watch and help him do that is a very rewarding experience.”

D-A Lubricant Company is well known and respected in the racing community through their PennGrade 1 brand. While PennGrade 1, the Original Green Oil, has been used in racing engines for generations, the company has also been the presenting sponsor of the Indy 500 and PCA Club Racing.

“All of us at DA Lubricant Company are excited about our new partnership with BVR. I’ve worked with Bob (Vandergriff) previously in a prior business relationship and look forward to using this program as platform for business generation and entertaining our current and future customers at the track while also further exposing our quality brand of PennGrade Racing Oils into the drag racing market,” said John Noal, executive Vice President for DA Lubricant Company.

“Our current plan is for both our cars to run a 15- to 16-race schedule, combining Jordan’s car with our race-winning Blake-driven car. This gives us two shots at winning any race we attend,” Bob explained.

Jordan earned his Super Comp license from the Frank Hawley Drag Racing School. He then moved on to compete in an A/Fuel Dragster this past year. When not driving, he’s been a crew member on the BVR Top Fuel dragster.

“The last six months I have learned so much working on the car with our crew chief, Ron Douglas,” said Jordan. “He’s gone thru this process before with the Force girls, so he is someone I can really lean on for advice and his expertise. It has taught me more about how the car works which will make me a better driver and it also helped my relationship with my crew.”

Race fans will be able to see Jordan’s Top Fuel dragster in action at the NHRA Toyota Nationals in Las Vegas, where it will be driven by Alexander.