In 1982, "Big Daddy" Don Garlits, always the innovator, experimented with a sideways-mounted nitro engine in his Swamp Rat 27. Although the engineering marvel didn't pan out, it was still vintage Garlits to even try it.
02 Mar 2018
Phil Burgess, NHRA National Dragster Editor
DRAGSTER Insider 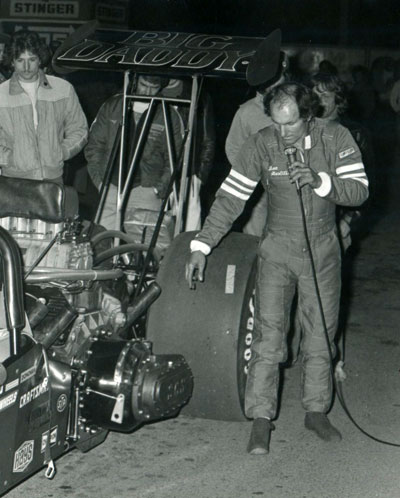 Last week’s column mentioned Don Garlits’ ambitious but short-lived sidewinder Top Fueler (Swamp Rat 27) and led to quite a few requests for more information about one of the wildest machines to come out of the fertile mind of “Big Daddy,” and because I have lots of info about the car, why the heck not?

As you might have gathered from Part 3 of the Swamp Rat Spotters Guide I compiled in 2011, the early 1980s found “Large Father” – his legacy already cemented as Top Fuel’s greatest racer – in search of The Next Big Thing. (“You know me, always wanting to try something new,” Garlits said in his book Don Garlits and His Cars.)

Allow me to recap.

Garlits had already seemingly reached the peak of Top Fuel performance with a conventional car when Swamp Rat 22 ran 5.63 at the 1975 World Finals, an e.t. not matched for more than six years. Swamp Rat 23 was built for the 1976 season by talented Floridian Glen Blakely. It was basically Garlits’ anti-NHRA car and ran only at IHRA events because Garlits was still steamed at NHRA over the whole IHRA-NHRA-Gary Beck lawsuit imbroglio. SR24 was originally built as a two-piece chassis specifically for the Donovan engine, but broke early and became a one-piece car that lasted three seasons 1977-79) and enjoyed moderate success.

Swamp Rat 25 (1980) was “Godzilla,” the thick-nosed groused-effects car that even Garlits said should never have been built and which was retired by October to be replaced by “the Indy comeback car,” Swamp Rat 26. In late 1981, the sidewinding Swamp Rat 27 was born. 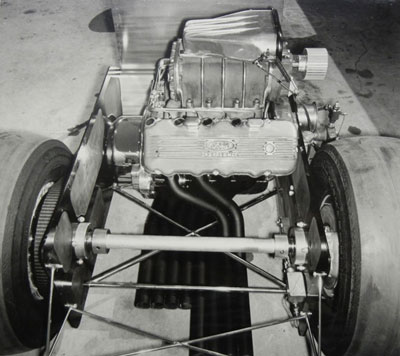 Sidewinders were certainly not new to drag racing. Creighton Hunter had a transverse-mounted engine in his wedge-shaped “Slice of Pie” way back in 1955 and the Jones-Malliard-Chrisman ”5 Cycle Special” rear-engine sidewinder was a terror in 1959, with Jack Chrisman taking A/Dragster class honors at the 1959 Nationals, and Chet Herbert fielded a rear-engine sidewinder dragster, which ran in 1962 with Zane Shubert at the wheel, and there were many, many others. Chrisman even carried the sidewinder idea to Funny Car (pictured at right), as did Ed Lenarth. The attraction to the concept is easy to see: The right-rotating engine torque buries the rear tires for better traction and straighter leaves. In theory, at least.

The rub on the sidewinders was that the powertrain’s weakest link –- pun intended -– was the drive chain that spun the rear axle. Not only was it prone to breakage but the gearbox that was required ate up a lot of power.

Brothers Chuck and Mike Sage, owners of SCS Gears in Bellevue Ohio, had some real-world experience in tractor pulling gearboxes and approached Garlits in 1981 about helping him with a sidewinder Top Fuel project. This one had no chains, just gears. They had already experimented with a setup in their Alcohol Dragster and thought that it could work in Top Fuel, too. Garlits, of course, was all-in.

"I was at a match race in Norwalk, and the brothers were both there and we got to talking about how hard the launches were getting and how the cars were torqueing over, and how sidewinders didn’t have that problem," Garlits told me earlier this week. "Those cars were just driving the torque straight back. It occurred to me that might be the answer to some of our problems."

Garlits initially expressed concern about the gearset’s ability to handle the estimated 4,500-5,000 horsepower he was making, but the SCS crew assured him that the four- and five-engine tractor pullers made that much and more. Garlits says he even inquired about a Gilmer belt, but the company told him they didn't have anything that would withstand that about of horsepower. 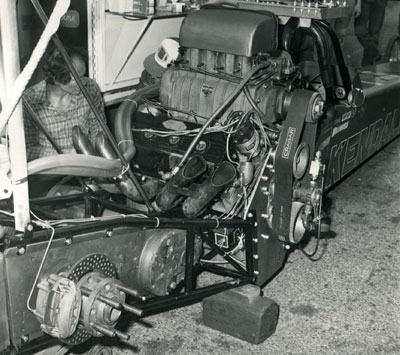 The basic chassis was built by Mike Sage -– one of the very few Swamp Rats that neither Garlits nor Tommy Lemons nor Connie Swingle nor Don Cook nor Bob Taffe helped construct -– but finished by Garlits and his team, and it certainly looked promisingly weird. With the engine mounted sideways, the blower drive faced to the right side of the car (though the injector hat itself was mounted into the wind) and the bellhousing out the left side. Each set of four header pipes split two and two in a v-arrangement pointing outboard to each side. (Check out the photo at the top of the column or the one below; you can see four sets of header flames. Wild!) 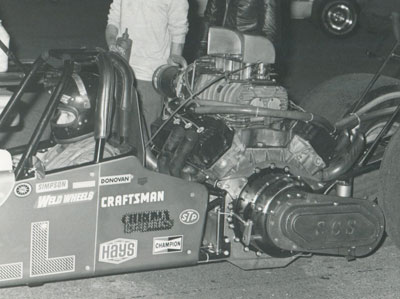 The driveline is where the rubber met the road, and it was mind-boggling different as well. One set of gears was driven off the back of the bellhousing, then power went back inside the chassis through a transmission and reverser to a center-mounted gear box that housed more gears that drove the axles.

The car was initially tested in Florida in November 1981 and although the numbers (reportedly 6.79 at 215 mph) weren’t great, and they experienced some breakage, Garlits was in love with the way the car handled -– “It went straight as a string,” he enthused –- and thought that it might be a problem solved at a track with better traction.

The car made its official debut Jan. 9, 1982, at the Coors Grand Premiere in a match race against Shirley Muldowney at Orange County Int’l Raceway in California. It did not go well. 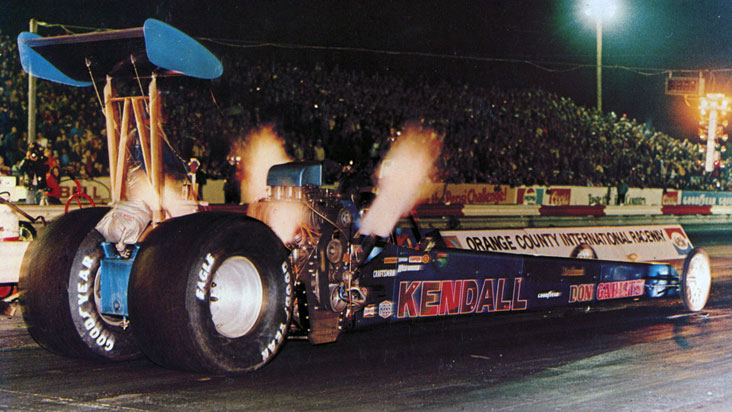 Muldowney won the opening round handily, 6.04 at just 218 to Garlits’ 6.41, 233.32. Muldowney again shutoff early in round two to a 6.58 at just 136 mph while Garlits steamed to the win with a 6,52 at 215.31. The rubber match was over almost as soon as it started as something let go in one of Garlits' gearboxes and Shirley sailed to an easy 6.25 win. According to one report, the drivetrain was so badly damaged on that third lap that the chassis itself was warped by the shock.

Both Garlits and the SCS camps retreated to their corners to regroup. Garlits fixed the chassis and the Sages built what they felt was a better, stronger gearbox. (Garlits says the gears themselves, made of specially heat-treated 4340 steel, never broke, just the gearbox.) After a test at Norwalk Raceway in April, Garlits’ ‘winder took on –- and lost to -- the Chi-Town Hustler Funny Car and driver Frank Hawley in a match race at Byron Dragway in Illinois.

Garlits knew he had the power -– the engine in the sidewinder had been transplanted from Swamp Rat 26, in which it had run 5.85 at 252 mph -- so he contacted an engineering buddy at the University of South Florida, who ran some computer simulations and determined that the car was losing about 21 percent of its power through the gearbox versus just 7 percent through a conventional rear end. Quite simply, the car was never going to be a competitor.

"If I could have made enough 21 percent more power to overcome the loss, I'd have just left the engine in my regular dragster," he chortled.

The car was shelved and Garlits went back to SR26. Mike Sage took the car and reportedly ran it on alcohol the rest of the year. I can’t find any results of that effort, but Garlits said the car never lived up to the Sages' expectations. The car eventually ended up back with Garlits, who restored it and put it into his museum.

"We spent a lot of time and effort and money on trying to make it work, but, in the end, we couldn't make it work," he admitted. "Am I glad I tried? Absolutely. Just because someone tells me that something won't work has never been good enough for me. You have to get out there and do it, so I did."

Even though the sidewinder didn't pan out and was added to the short list of Garlits' unsuccessful Rats, we all know what happened in 1984, and how his return to full-time national event competition not only breathed new life into his career but into the class itself.

Here’s the promised update on the identify of the sport’s heroes in the great Pete Millar-drawn 1975 Winternationals starting-line mosh pit. I've received maybe two dozen partial ballots, and we now at least have a suggested name for every human included, so here's the latest (and, likely, final) consensus: 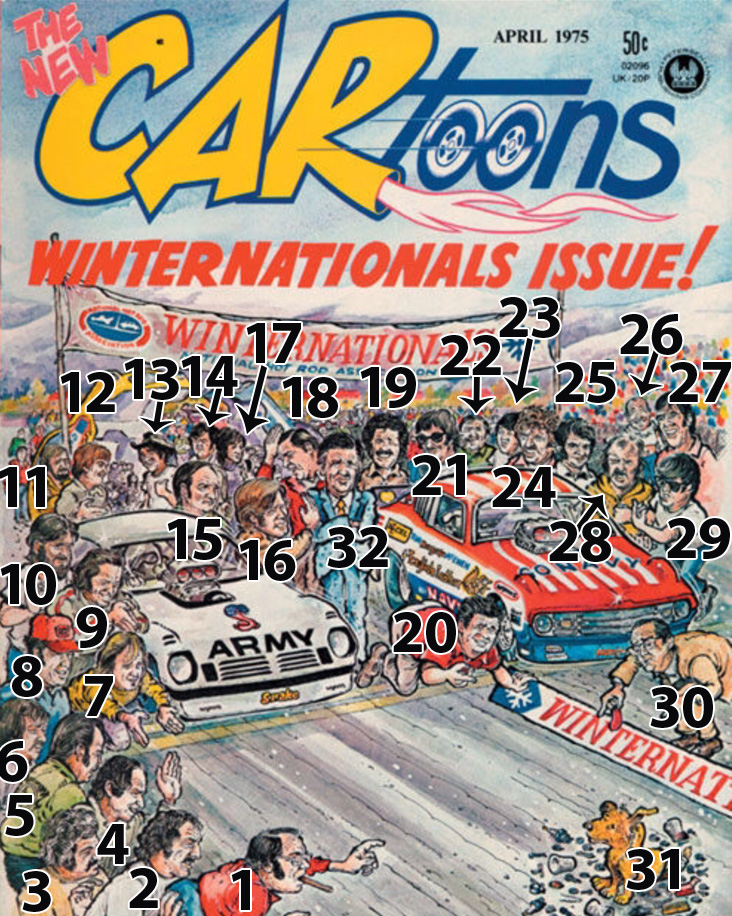 1. Bill “Grumpy” Jenkins
2. Leroy Goldstein
3. Chris Karamesines
4. Don Garlits
5. Either Gas Ronda or Jim Dunn. I think Dunn.
6. Either Gary Ormsby, Don Schumacher, or John Buttera. My money is on "the Shoe"
7. Pat Foster
8. Most thought Dale Emery
9. One vote for chassis builder Ron Attebury and another for Connie Kalitta
10. John “Tarzan” Austin
11. Either Tom Hoover or Terry Capp. I think Hoover.
12. Most voted Billy Meyer though one said Bill Doner. I think Meyer.
13. Jerry Ruth
14. Most agreed this was Ed McCulloch.
15. Either Wayne Gapp or Gene Snow. I thought Gapp but almost everyone else here is nitro-centric so maybe Snow.
16. Jeb Allen or Tommy Ivo.
17. Shirley Muldowney
18. Someone suggested Lou Baney
19. I thought Dave McClelland, someone else countered with Raymond Beadle, and now I’m hearing Dennis Baca. In short, no one knows.
20. Buster Couch
21. Possibly Ron “Snag” O’Donnell (two votes for that); someone else thought Ron Rivera (of “Frantic Four” fame) but that doesn’t seem to fit the mid-‘70s timeline
22. Maybe Dick Landy?
23. Definitely Roland Leong
24. One vote for Larry Huff
25. An odd one. At first glance I was sure this was Bob Glidden until someone countered with Rich Siroonian. Maybe. Those sideburns …
26. Someone suggested this might be the artist himself, Pete Millar
27. Frank Hall?
28. Gary Beck
29. One vote for Ed McCulloch, another for Tony Nancy, one vote for Larry Dixon Sr., and another for Mickey Thompson. Easily the biggest mystery
30. NHRA competition director Jack Hart
31. What’s up with the dog?
32. Wally Parks

It’s been a pretty rough year for drag racing photographers, those aperture-adjusting artists of the quarter-mile who allow you and I to see things we never would have seen in real life.

In addition to being a photographer and illustrator, he also was an accomplished modeler and sculptor and the former Director of Motorsports at MPC and IMC models.

He’ll be missed by his brothers.