With a nod to this weekend’s JEGS Route 66 NHRA Nationals, let’s take a look at drivers from drag racing’s past who called Chicago home.
31 May 2018
Phil Burgess, NHRA National Dragster Editor
DRAGSTER Insider

With a nod to this weekend’s JEGS Route 66 NHRA Nationals, let’s take a look at drivers from drag racing’s past who called Chicago home. Even though the event itself isn’t in Chicago but nearby Joliet, because the number of quality drivers and machines from the area is so large (even within the city limits, there are more than 180 “neighborhoods”) that I’m narrowing this list (which is by no means all-inclusive) strictly to those who claimed Chicago itself as home (at least according to DragList.com). Arbitrary, I know, but hey, it’s my column.

So, even though I’ll be excluding obvious choices such as Don and Tony Schumacher (Long Grove), TJ Zizzo (Lincolnshire), Cliff “the Chicago Kid” Brown (Lockport), and other famed racing Illini including Sid Seely (Moline), Jim Paoli and Tim Wilkerson (Springfield), and Bill Pryor (E. Peoria), the Chicago-only list that remains is pretty star-filled, too.

Obviously, any conversation about drag racing and Chicago probably begins with “the Golden Greek,” Chris Karamesines, who has raced fuel dragsters through seven decades and is still competing at 80-something years old (he won’t confirm his birth year, but most guesses have it at 1930). In his heyday in the 1960s, there was no more daring or fearless driver than Karamesines, who was an instant fan favorite everywhere he ran. His former profession as a dirt-car driver no doubt came in handy on the runs where his car left and then returned to the racing surface (in the days before guardrails, obviously) without his foot ever leaving the throttle. There’s probably not a driver today who doesn’t idolize “the Greek.”

Ron Colson didn’t make his first runs in a nitro-fueled car until 1968, when he joined forces with Ken Peterson to field this car, the Peterson & Colson Top Fueler, but he already was a well-established Chicagoland racer, having competed in gassers and stockers that set Drag News 1320 records before moving up to a Top Gas dragster in 1964. After Peterson & Cole won the UDRA Top Fuel championship in 1969, he drove briefly for Dick Huffer, then resurrected the Colson & Peterson car to run in Indy with backing from Dick Clark’s American Bandstand. He moved on to drive for Ma and Pa Hoover in both front- and rear-engine cars before jumping into one of the most famous Funny Cars of the era, the Chi-Town Hustler, with which he won the IHRA Funny Car championship in 1974. After a brief ride in the Chicago Patrol, he joined forces with Roland Leong and drove the Hawaiian floppers through 1980, after which he retired from driving.

I’ll give you both Pat Minick and Pete Williams as a Chi-Town Hustler twofer, Windy City residents who wheeled the famous entry. Minick (as told in an earlier column here) was the original driver in the late 1960s with the famous Dodges and was followed by Williams a decade later with the Mustang II and the Dodge Challenger pictured here.

Ron Correnti was a well-traveled Funny Car shoe who, like Ron Colson, got his nitro start in fuel dragsters and wheeled floppers for a number of teams, including his own, throughout the 1970s and 1980s. After teaming with Davis Emerson on the Dodge Charger-bodied Chicago Charger in the early 1970s, he returned to Top Fuel, then went back to Funny Car, driving for the likes of Tom Motry (Drastic Plastic), Larry Coogle (The Sting), and Bill Dunlap (Capt. Crazy). It was in Dunlap’s car that Correnti became infamous for being rear-ended by Dave Uyehara after a side-by-side Funny Car run at the 1986 Winternationals.

Grand-Spaulding Dodge opened in Chicago at the corner of Grand and North Spaulding avenues in the fall of 1962, and owner Norm Kraus – who affectionately became known as “Mr. Norm” in his newspaper ads – began an immediate focus on high-performance cars. The first Grand-Spaulding Dodge racing team was formed in 1964, and 1965 began his long association with driver Gary Dyer that begat a series of strung-running and crowd-pleasing Mr. Norm Dodge Funny Cars. In 1974, Grand-Spaulding Dodge became the largest-volume Dodge dealership in the world. Kraus sold the dealership three years later. Famed SoCal dragster pilot Kenny Safford drove the car in 1968 when Dyer was recovering from burns suffered in a racing fire. Dyer tuned, and Safford drove. Safford left the team but returned to drive again in 1972 and purchased the car and the name in 1973 and ran through the end of the decade.

Ron “Snag” O’Donnell was one of the Midwest’s most prolific drivers in the 1970s, with a long list of cars on his résumé. Originally a fuel altered driver with the entry owned by Lon Denison, Mike Arlasky, and Bill Knox, he drove (among others) the Chapman Automotive Camaro, Ron Pellegrini’s wild Super Mustang, Mr. Norm's Grand-Spaulding Dodge, Chris Karamesines’ short-lived Chizler flopper, the Fighting Irish of Tim Beebe and Dick Rosberg, Don Cook's Damn Yankee, and, most famously, the second Stardust machine of good friend Don Schumacher. O’Donnell set both ends of the NHRA national record at 6.41, 227.84 in July 1972. He finished his career in his own cars, including the Big Noise from Illinois and the reborn Damn Yankee, beginning in 1973 and ending with a crash in Michigan in 1977. 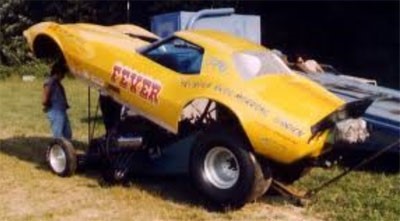 Ed O'Brien ran a number of Funny Cars out of Chicago with pal Paul Stenquist on wrenches, and many of them turned out to be star-crossed. A pair of Corvettes dubbed Fever both crashed – this was back before Tom McEwen figured out that the perpetually ill-handling ‘Vettes needed spill plates on their rear decks – and after the second one, he bought and ran the popular but well-traveled Chicago Patrol Mustang for a stretch. He also drove the QuVoe Charger, sponsored by the petroleum company.

Ron Pellegrini's Chicago-based company, Fiberglass Ltd., was the first to mass-produce fiberglass-replica bodies in the earliest days of the glass. Pellegrini's own altered-wheelbase Mustang, the Super Mustang, was the sport's first true fiberglass-bodied Funny Car and led directly to the founding of Fiberglass Ltd. In 1964, Pellegrini took a brand-new Mustang to a local fiberglass shop, where a mold was made. The body was put atop the chassis of the Denison, Arlasky & Knox fuel roadster. It didn’t take long for the interest of their peers to be piqued, and in November 1965, he went into the full-time business of making fiberglass auto parts.

John Pott worked for “Mr. Norm” Kraus and was a regular on the Midwest match race scene, both with his own cars, including the King’s Ransom Monza (pictured), and those of others, such as Larry Coogle's The Sting, Gary Craven’s Nitro Fever, and, of course, the Mr. Norm’s car. (Mike Sopko photo) 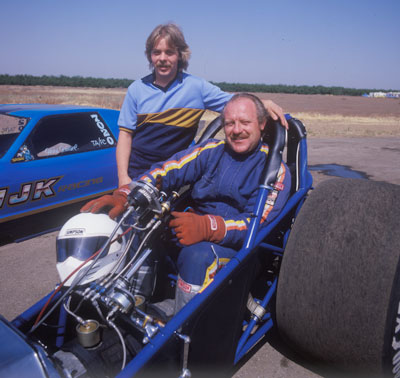 When the phone rang last week and Caller ID said it was from the phone of Hans Kuesel, I was thrilled. I’d known Hans, a longtime West Coast Alcohol Funny Car racer, since my earliest days here at National Dragster. My first assignment had been to cover the Summer Showdown at Orange County Int’l Raceway in mid-1982. Kuesel was one of the first people I met and he greeted me enthusiastically and made me feel welcome. I always made a point to stop by and talk to him and his son, Tom, for years after. As I picked up the phone, I was thinking how good it was going to be good to talk to him after years since I’d seen him at the track

That thrill turned to gut churning when the voice on the other end of the phone belong to his wife, Kay. I remember thinking -– and probably even saying out loud “No, no, no” –- as she delivered the bad news that Hans had passed away earlier that week. He’d had various health issues the last several years, and his body has finally had enough and he succumbed to a combination of them. He was 78.

I’d never gotten a chance to really thank for how much he meant to be those first years here, but I told that to Kay, and when she told me that Hans had always spoke of fondly of me over the years, that made me feel really good.

Kuesel was born in Berlin, Germany, but moved to the United States and began drag racing in California in 1976 with a B//Gas Chevy II called Poltergeist before graduating to Alcohol Funny Car in 1978 with a Monza. His HJK Racing entries became a staple of West Coast national, division, and match-race events. He never reached a national event final and won only one divisional event according to our records, but he was always there and always a top draw.

He’s best remembered for a first-of-its-kind Mercedes Benz-bodied machine that he debited in 1985. After retiring from the class. Kuesel competed in a nostalgia Top Fueler with partner Ron Corbari in the late 1990s and early 2000s.

Kuesel is survived by his wife, Kay; sons Tom and Jeff; stepsons Jason and Brian Topliker; and sister Edith.

Just a heads up to loyal Insider readers: This weekend's event marks the first of four straight weekends of racing and, although I'm not working the Chicago event, I am on the road for the next three (Richmond, Bristol, and Norwalk) which means more time in the air flying coast-to-coast-to-coast (etc.) and less time parked at the keyboard, so I'm not sure how many columns I'll have during that span. I apologize in advance if it's zero (though i think that unlikely), but I wanted to at least throw that out there.