Matt Smith’s third NHRA Mello Yello Drag Racing Series Pro Stock Motorcycle championship, much like his first, was won in the most dramatic fashion possible with a winner-take-all final round at the season-ending Auto Club NHRA Finals in Pomona. Smith won his first title in 2007 by beating Chip Ellis in the Pomona final, and when he staged against Eddie Krawiec with the 2018 title on the line, he couldn’t help but think back to that moment.

“The first time I was in that spot, things fell my way, and I was able to win the championship, and I was just hoping that it would fall my way again,” said Smith. “Thankfully, it did. I can’t lie, I was nervous about the whole weekend in Pomona. Yes, I was in the same [winner-take-all] situation in 2007, and I knew what I needed to do. On Thursday, when we were doing the NHRA press conference, I knew it didn’t matter where I qualified. I knew that if I won the race, I’d win the title. That was our whole goal; just to win the race. We tested on Monday after the Las Vegas race and found a problem, so I knew we’d be quick in Pomona, but I didn’t know how quick. I was thinking we’d pick up maybe two or three hundredths.” 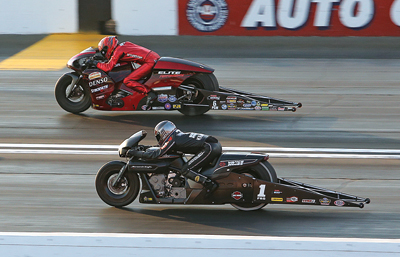 Smith was indeed quick in Pomona. In fact, he tuned in one of the most dominating performances of the season when he qualified No. 1 and ran a string of 6.7s to reach the final round, including a 6.76 in the final to easily cover Krawiec’s 6.81. Smith also joined the Denso Spark Plugs 200-mph Club and set the speed record in the final round with a 201.22-mph blast. Entering the event with a slim four-point lead over Krawiec, Smith was able to maintain his lead throughout the event.

“That was the first time I’ve ever gotten three [NHRA Mello Yello] hats in one weekend,” said Smith. “A green one [for low qualifier], a yellow one [for winning event], and a white one [for world championship]. That was pretty special. We also broke the curse of being the low qualifier. Every time I’ve been No. 1, I haven’t won the race. I knew that we’d have to get over that sooner or later.”

Eight months ago, at the season-opening Amalie Motor Oil NHRA Gatornationals, Smith looked and felt like anything but a world champion after he suffered a rare DNQ. During the offseason, Smith reached an agreement to ride a Suzuki for the San Marino Excavating team. The partnership lasted one race, and Smith left with nothing but a huge points deficit. Returning to his own Victory V-twin, Smith slowly began to regain his footing, first with a semifinal finish at the Charlotte Four-Wide race and a win a few weeks later in Chicago.

“I honestly wanted to run the Suzuki this year,” Smith said. “I knew I could make that bike better than it was, but in hindsight, it might be for the best. After I didn’t qualify in Gainesville, I never even thought about a championship. I went to Charlotte with my old Victory bike and just wanted to qualify. At that point, I was thinking, ‘What am I gonna do?’ I didn’t have a sponsor or a plan. That whole [Suzuki] mistake cost me $8,000, but I wouldn’t be in the position I’m in if that hadn’t happened. I won $75,000 for the championship and another $25,000 for the Pro Bike Battle, so it was a great year.” 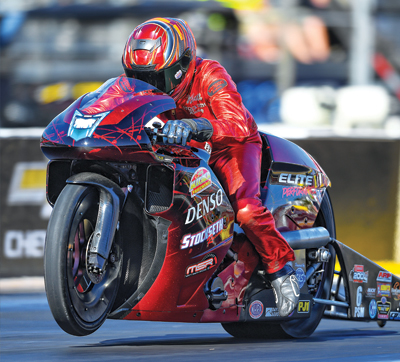 In addition to the switch back to a V-twin bike, Smith has no problem admitting that a key component of his championship run was the new EBR body that he debuted in Brainerd. The same body that helped Hector Arana Jr. crack the 200-mph barrier in Gainesville gave Smith the performance boost he needed to win three Countdown to the Championship events and put together a 16-3 record during the playoffs. Smith began the Countdown in sixth place, but he quickly moved to third after Reading and held the lead for the final three events. The reported $25,000 cost for the body was absorbed by the Elite Motorsports team.

“It’s probably safe to say that I wouldn’t have won without that body,” said Smith. “Now, I’m not saying that other body was terrible. We won Chicago, and we won the Pro Bike Battle with it. I think the old body is within one mph of the EBR, but the difference is that if you have to make a correction, the EBR seems to be able to respond quicker and you don’t lose as much momentum. That’s where I think we gained the most ground. There were a lot of factors that helped us win, but the body was definitely one of them; probably the biggest one.”

Riding high after starting the Countdown with a runner-up in Reading and a win in St. Louis, Smith quickly came crashing back to earth when he lost in the first round in Dallas. Following a big holeshot loss to Karen Stoffer, Smith was knocked from first to third in the standings and wondered if his shot to win another title had been wasted. 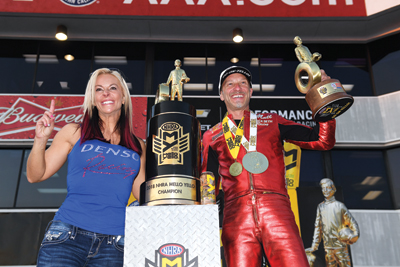 “Going into the Countdown, I knew we had the bike to beat,” said Smith. “I should have won Reading, but a fuel line broke in the final against Junior [Hector Arana Jr.]. I got the lead after St. Louis, and then I started to race scared. I went to Dallas and lost because I didn’t have the right mindset. I was trying to protect the lead instead of just focusing on winning rounds. I finally told myself that I was going to go for it, and if I red-light, then it was on me. We went on to win two of the next three races and the championship. Pomona was exciting, but that was a huge relief when it was all over.

“As good as we ran this year, I think we can be better,” Smith said. “There is a little issue with this engine that we need to fix, and I think we can pick up 10-12 horsepower. Either way, we’re going be pretty fast. I’m also looking to land a major sponsor, and we’re going to put an EBR body on Angie’s bike, so there is a lot going on around here. Angie and I have a great team, and we also had a lot of help from Elite Motorsports, Mark Stockseth, Greg Butcher, Denso Spark Plugs, and Lucas Oil.”