Another farewell to friends

Another week, another serving of sad news for veteran fans of our sport with the passing of two more drivers from the earlier years of our sport (and don’t even get me started on Englishtown; maybe next week).

Longtime Top Fuel fans might recognize Paul Longenecker’s name as one of the Midwest’s most active Top Fuel drivers in the 1970s as he competed on NHRA, IHRA, and AHRA competition with modest success in all three. We lost him Jan. 8 at age 77 (thanks to Insider regular “Chicago Jon” Hoffman for the heads up). A day before Longenecker’s passing, the world also bid goodbye to gasser great Jack Merkel, who died of cancer at age 80. 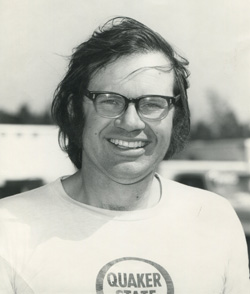 Longenecker was one of those names – and an unforgettable one at that, given its uniqueness – that I always seemed to read about in those 1970s magazine articles, before TV and the internet made knowing the drivers so easy. For a guy who wasn’t exactly a household name and never won an NHRA national event title, he was extremely well respected by his peers in Division 3 and beyond. What a lot of people don’t know about him is that from his home base in Arcanum, Ohio, he also competed in also competed in Pro Stock, Modified, Comp, Super Stock, and Stock before he switched to a nitro dragster in late 1972.

After launching his career in Modified in 1959 in a 389-powered B/Gas ’57 Pontiac, he converted the car to run in Stock through 1963. After service in the Army, he returned to the quarter-mile in 1967 with a B/Comp dragster and won class at the Winternationals and at the famed Hot Rod Magazine Championships in Riverside, Calif.

After three years in Comp, he built a 427-powered ’67 Camaro and tried his hand in the new Pro Stock class and even won a round at the U.S. Nationals. The car was too old to continue in Pro Stock in 1971, so he went back to Modified with an A/Modified Production ’61 Corvette and later a big ol’ F/Gas Pontiac wagon, but already had his sights set on Top Fuel. For 1972, he teamed with his brother Tom to compete in Super Stock with Tom’s SS/QA ’57 Chevy and won class again at the Winternationals.

Before the season ended, Mark Williams had finished his Top Fuel chassis and Longenecker made his Top Fuel debut at the 1972 U.S. Nationals where he not only qualified but beat Ray Stutz in round one. Jerry Ruth lowered the boom on him in round two with a 6.06, at the time the quickest run in the sport, but Longenecker was hooked. 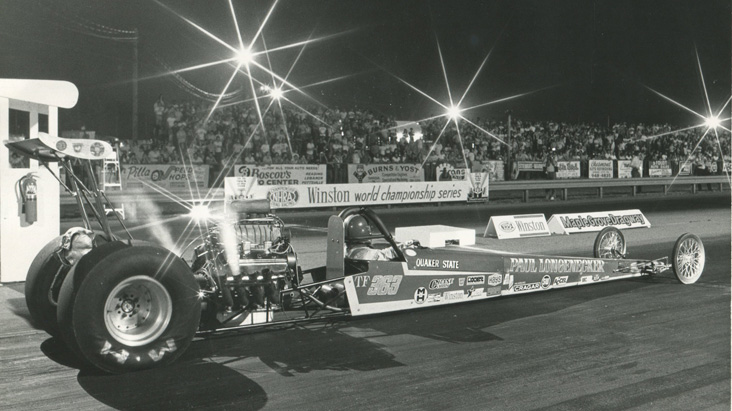 “I’m not sure why I made a leap like that,” Longenecker told National Dragster in 1995 to explain his move to Top Fuel. “I was more doorslammer-oriented, but I loved going to the big races and running in front of big crowds. If there was a big race somewhere, I wanted to be there. I also kind of liked the idea of racing in the top class.”

Longenecker raced Top Fuel for so more full seasons, running as many as 50 dates a year, before costs forced him to park his car after the 1979 Gatornationals. Although he never won an NHRA event, he and then-partner Roger Smith did claim Top Fuel at the 1974 IHRA All American Nationals in Bristol and, although I can’t find a record of it, also reportedly won an AHRA race. He finished in the top 10 of all three sanctioning bodies in 1976, won the 1974 Division 3 Top Fuel championship, was the low qualifier at the 1975 NHRA Winternationals, and won a number of NHRA divisional events.

Longenecker also rode out what was one of the most harrowing Top Fuel blowovers of all time at the 1973 Popular Hot Rodding meet. You can see Longenecker launching into a wheelie that grows bigger as he stays on the gas trying to beat Jim Bucher. Finally, the car goes vertical, then pirouettes down the track on the rear rubber alone like a ballerina, spinning on its axis what looks like four times before crashing back to the track. It’s an amazing piece of footage.

After retiring, he was both a farmer and a part-time chassis builder, and in the later years of his life devoted himself to work within the church. 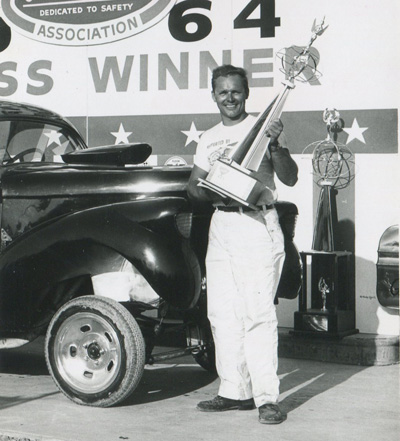 Merkel was a hero of Chevrolet fans as he eschewed the more popular Chrysler Hemi to run a series of small- and big-block Chevy powerplants in his Willys entries. While guys like Stone, Woods & Cook and “Big John” Mazmanian represented the West Coast and “Ohio George” Montgomery the Midwest, Merkel was a fan favorite on the East Coast.

After running a supercharged B/Gas Supercharged ’55 Chevy that eventually recorded low 12-second elapsed times, Merkel built a ’39 Willys in 1962 with power from a 364-cid small-block to compete in A/GS. At the 1962 U.S. Nationals, he was runner-up to Mike Marinoff, the only time that the car was ever defeated in class competition at national events. He won class honors at the 1963 and ’64 Nationals in Indianapolis. 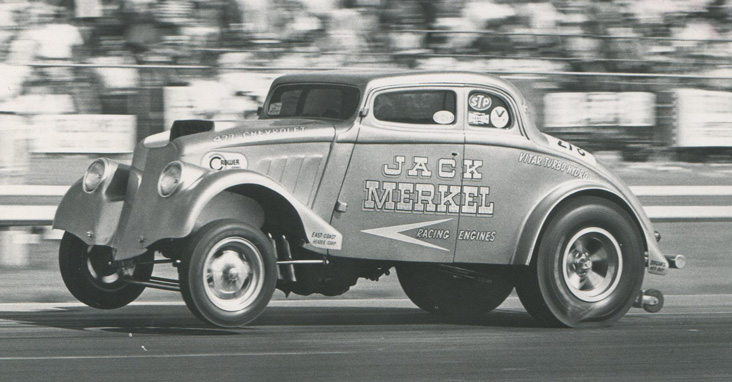 At the end of 1964, he built a lighter ’33 Willys and match raced it frequently and eventually got the car into the mid-nines. In 1967 season, he swapped his small-block for big-block power and built an all-fiberglass ’33 Willys that eventually ran in the eights at nearly 160 mph in the vaunted AA/GS ranks. When racers like Montgomery began ramping up the technology and switching to late-model bodies, Merkel reportedly had interest in the Funny Car class, but never pursued it, and retired from driving.

After leaving drag racing, he was a successful builder of NASCAR engines and with his sons, Scott and Todd, later returned to the dragstrip. At the 2015 New England Hot Rod Reunion, he was presented with a Lifetime Achievement Award by NHRA. 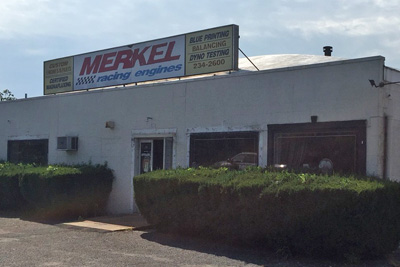 I heard from his son, Todd, shortly after his passing. Todd and Scott had taken over the responsibility of the family engine-building business.

“Dad continued to come to the shop every day until fairly recently,” he said. “My brother and I both won many events and multiple championships in drag racing with the NMCA and "Fastest Street Car”-type series throughout the 2000s. As a matter of fact, my nephew, Gregory (Scott's son, Jack's grandson) won the Pinewood Derby World Championship in Times Square this past summer.  He was 10 years old at the time. The winning legacy continues.

“Scott still runs the engine shop, I took a job with Joe Gibbs Racing NASCAR team for a few years. Now, I am a Performance Development Engineer at Ford Motor Company. We both wound up making a good living with the skills and life lessons we learned growing up with that great innovator, racer, and man. I am still astounded by the respect my father earned in a lifetime of racing, engine building and supporting motorsports. I literally never heard a bad word about the man.”

Man, I'm getting weary of having to use this space to salute those who passed. Anymore I seems like it's all that I do here. So, I'm going to do two things. First, I'm going to announce a five-year moratorium on any famous racers dying. Second, I'm going to open up topic suggestions to the Insider Nation, kind of like a year-round version of the popular Readers Choice issue we do annually at National Dragster. Because I'm not going to be writing about departed heroes, right? So, fire away. What's the topic or racer you always wanted to learn more about? Hit me up at the address below and let's put the good back in front of memories, OK?