East Coast Funny Car racer Joe Jacono was the subject of a memorable drag racing magazine cover in the 1970s, but there was far more to him than that. Also in this week's Dragster Insider ... found: the Durachrome Bug!
06 Oct 2017
Phil Burgess, NHRA National Dragster Editor
DRAGSTER Insider 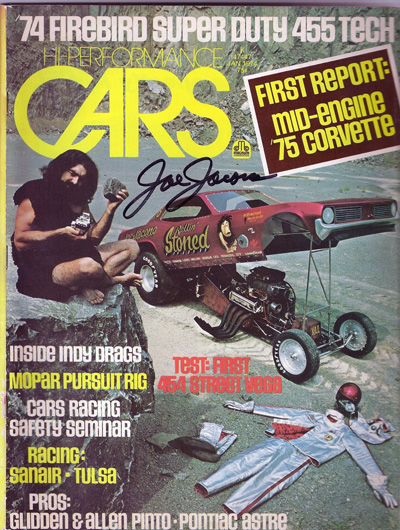 It’s funny how an image can stick with you forever. More than four decades after I picked up the January 1974 copy of Hi Performance Cars magazine at my local SoCal Thrifti-Mart, I still remember vividly the insane image of a caveman and his Funny Car that adorned the cover and thinking, “What the heck is this?”

His name wasn't even included in the cover blurbs (at right is a photo I found online of an autographed copy) to hint there was a story inside so I had no idea who he was.  I was 13, had been a drag racing fan already for a couple of years and a rabid reader of the drag monthlies, but I’d never heard of Joe Jacono and his Rollin’ Stoned Funny Car. There was a “Jungle Jim”-like caricature on the side of the car of a caveman with a stone wheel, so I got the inspiration for the wild cover shoot, but even to newly-minted teenage me that seemed a little slim; was the car named after the band or the magazine or the Bob Dylan song? 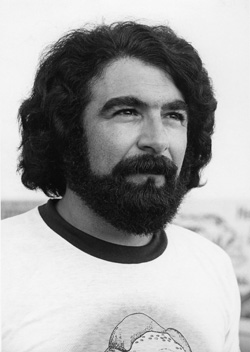 Or, with his long hair and heavy beard, was he was the Eastern version of West Coast flopper racer Mike Mitchell, “the World’s Fastest Hippie,” whose cars were emblazoned with a hookah pipe. Hey, it was the ‘70s, right?

I never met Joe Jacono -- never even interviewed him -– to ask about his career or even the question that burned in my brain for three decades, all thanks to a magazine cover, but I really wish I had. We lost him in late August, another of the great Funny Car characters of the 1970s gone.

He wasn’t a megastar by any means, having to race, like so many others, in the significant shadows of East Coast compatriots like that “other” J.J., “Jungle Jim” Liberman, and Lew Arrington, Bruce Larson, Al Segrini, Al Hanna, etc., but I'm sure he had his legions of fans, and I’ll never forget him, thanks to a 43-year-old magazine cover. 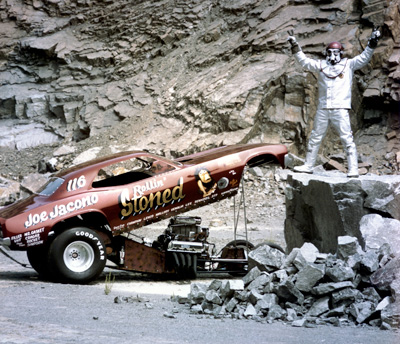 If you recall the series of columns I wrote a few years ago about magazine photography in the 1970s (here and here), you’ll remember that the photographers of that era –- guys like Steve Reyes, Jere Alhadeff, Bob McClurg, Jim Kelly, Jon Asher, Tim Marshall, Alan Earman, et al -– went to great lengths to shoot car features in creative environments.  But taking a guy's car to a rock quarry, dressing him up as a caveman, and have him banging a rock on a small-scale fuel engine? Brilliance. (I don't have the actual magazine in hand to see the cover photo credit, but I'm going to give the credit to Jim Cutler, because of the other photo shown here, that does have his photo credit on it.)

Anyway, whether the car's name was about stones or being stoned, I’ll never get the chance to ask him or for other stories of his life, and I'll have to live through other people’s stories, so I did a deep dive of some Joe Jacono history to share with you. 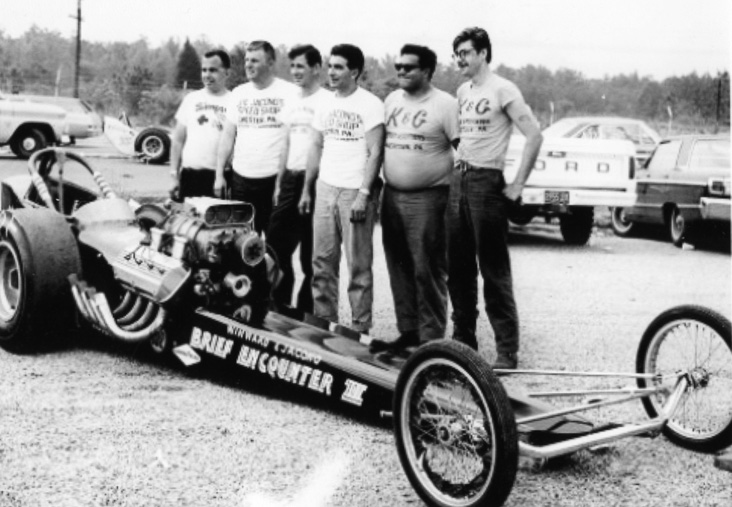 Jacono, who grew up in south Philly began racing in 1955 on the streets and launched his official career in a home-built gas dragster (reportedly built using plumbing pipes). He later partnered with Biddy Winward on a fuel dragster called Brief Encounter that ran all up down the East Coast, from Canada to Florida. In the early 1960s, he won seven meets in a row and was named the NASCAR Fuel Champion Driver of the Year (back when NASCAR sanctioned drag racing) and set national records in both NHRA and AHRA competition and was NHRA’s Division 1 Top Fuel in 1968 as the driver of the Barbin and Haywood Hi Roller. 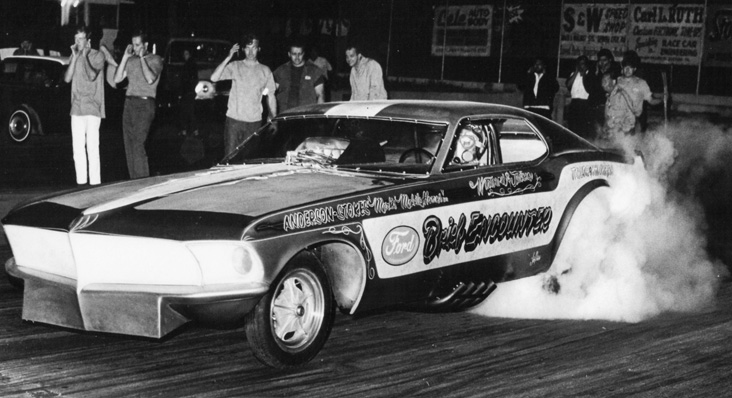 Like a lot of fuel dragster guys, he switched to Funny Car in the early 1970s. He and Winward bought an ex-Tasca Ford Mustang and quickly got licensed (some say Ed McCulloch signed his license, others say it was Don Prudhomme or Connie Kalitta reportedly signed his ticket).

As legend has it, a friend’s irate girlfriend came upon the car, still strapped to the back on their ramp truck, parked in the driveway of said friend’s house and doused it with gas and set it alight, destroying everything. 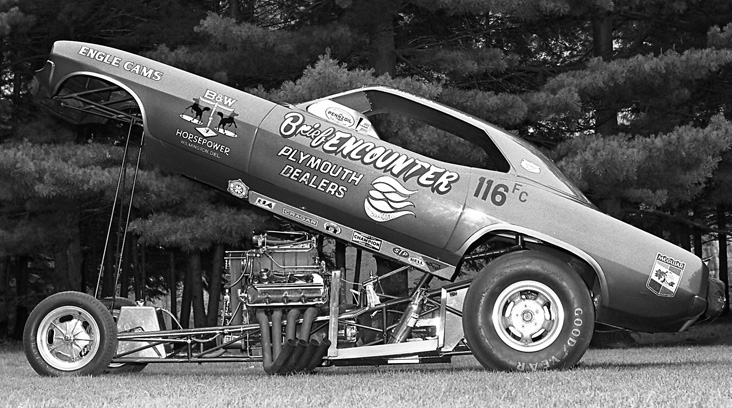 Undeterred, they somehow were able to beat everyone to the punch by buying one of the nation’s best car, the 1970 candy-red Cuda with which “Big John” Mazmanian and nephew Rich Siroonian had piled up several 220-mph blasts.

They took possession of the car right after 1971 Winternationals and also named the car Brief Encounter after its dragster predecessor (or perhaps with the fate of their previous Mustang still fresh in memory) and raced together through the 1972 season before parting company.

Jacono then had Woody Gilmore build him the Rollin' Stoned car that would later grace that magazine cover. He toured almost exclusively in the east and Midwest and competed through the end of the 1976 season before retiring.

“Honestly, I felt like sooner or later God was gonna catch up with me for living as crazy as I did,” he later told Hot Rod magazine. “It was time to change. I went to Albany, New York, for a race, and really began to think about what it took-this car cost me everything I made. I never had any money. It didn’t make sense anymore.”

Bill Warburton offered this late addition to the column: “To say that Joe was a real character would be an understatement. Off the track Joe could make ‘Jungle Jim’ look like a Sunday school teacher. Joe was always full of mischief and pranks, and he didn't care who he pulled them on. One time Liberman was going to stop by Joe's Delaware business. Joe had a friend on the police force and told him what car to look for and then pull Jim over and lock him up. And, of course, Joe was always trying to spend some ‘quality time’ alone with ‘Jungle Pam ‘

“One of the most hilarious thing that happened between Joe and Jim was at Maple Grov. They were often booked to race each other. One night before they were to race someone suggested that Joe and Jim get into a fake fight before the race, like in Pro Wrestling. They both thought that would be fun so they starting shoving and grabbing. At that point Jim gave Joe a very hard shot and that is when the ‘Chester‘ came out in Joe and all hell broke loose. Joe, who was smaller than Jim but kept himself in top shape and could handle himself, knocked Jim to the ground and both crews jump on, starting a full-blown brawl. Years later Joe would tell me, ‘Here I am wailing away on Jungle at the bottom of the pile and he says to me , "Do you think that anyone is seeing this?” Rich Hamilton, a photographer, was there and got a picture of the whole scene.” 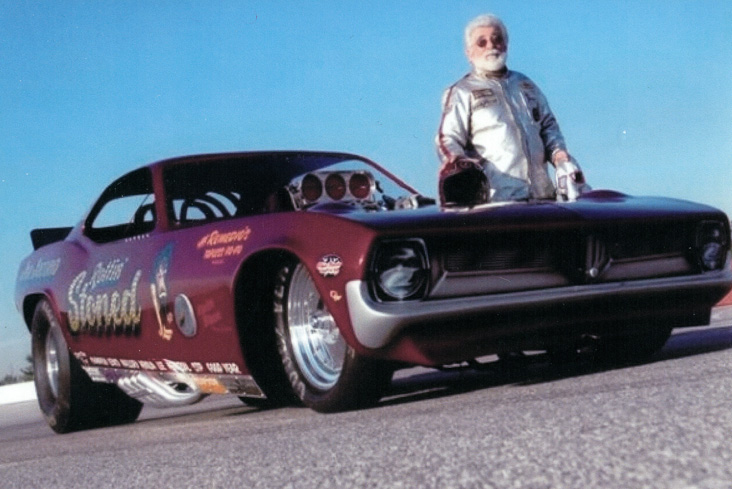 Jacono got a second chance to be a Funny Car hero after Bob Rosetty realized he’d come into possession of the Rollin’ Stoned car. He called Jacono, who validated the cars pedigree, then proceeded to restore the car to its 1970s glory. The two became friends and within a few years had hatched the idea to put Jacono back into the saddle of a nostalgia Funny Car, which they did. He licensed at Doug Foley’s Florida driving school and made runs in the car at the National Hot Rod Reunion in 2004. In 2010, NHRA saluted him as one of its honorees at the Reunion.

Sometimes life just gives you a second chance. I’m glad he got his.

Speaking of resurrections, I got a cool email from Dru Jaxon, who has come into the possession of the famed Durachrome Bug Funny Car, which was campaigned in the early 1970s by Warren Gunter. 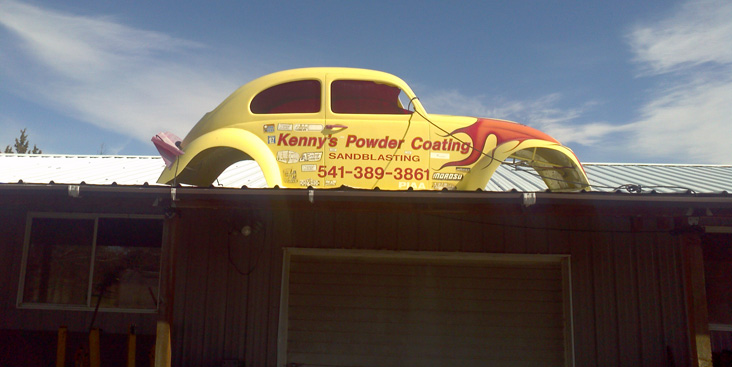 Jaxon found it in Bend, Ore., where the body served as a very visible advertisement for Kenny Clouse’s powder coating business, perched on the roof of the shop and repainted and relettered as an advertisement. That jibes with my 2009 interview with Gunter who told me he “heard it ended up in Oregon or Washington.” 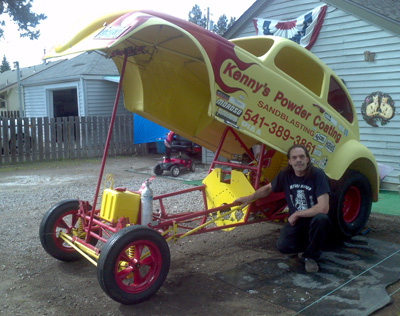 “Actually, it found me,” Jaxon (pictured, right)  told me when I inquired how he’d gotten his hands on such a find. "I was looking for a project and just happened to see frame under some plywood and asked about it and learned what it was. The body had been on his roof for 15-plus years. Anyway I had to save it so I gave him a handful of cash and towed it home."

Being the great detective that I am, I was able to track down Clouse -- OK, his  phone number was conveniently lettered on the body -- who filled in the rest of the blanks, which is itself is a great story.

"A guy here in Bend had it in the 1970s, and I bought it from him for $1,200," he said. "He worked at a wrecking yard and he'd put a 383 in it. It was painted light blue with a mouse on the side and it said 'The Mouse That Roared.' I called Warren to see if he wanted the car back, but he didn't, so I put a blown small-block in it and ran it at the 'midnight drags.' I put headlights and brake lights on it and actually had it licensed as a Volkswagen dune buggy so I could drive it on the street." 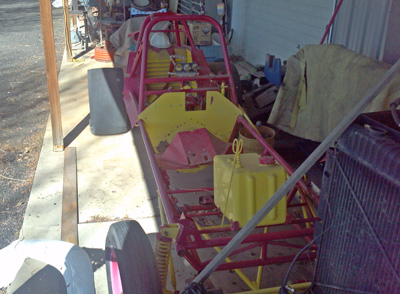 Clouse later sold the car to someone in Grants Pass, Ore., but a few years later heard that the car was sitting neglected in a blackberry brier and bought it back for $1,000. When a local police officer made it his mission to terrorize Clouse about the car, which he kept parked in his front yard, he built his own eighth-mile dragstrip on his property to run the car.

Clouse painted the car midnight blue with flames, but later painted it yellow and red and powdercoated the chassis in the same colors. Over the years, a number of people have tried to buy the car, but, according to Clouse, until Jaxon came along, no one was willing to put up the money needed to make that happen.

As you can see below, Jaxon has already taken the first steps in restoring the car and has been in touch with Gunter, who has promised to send photos of the car to help. 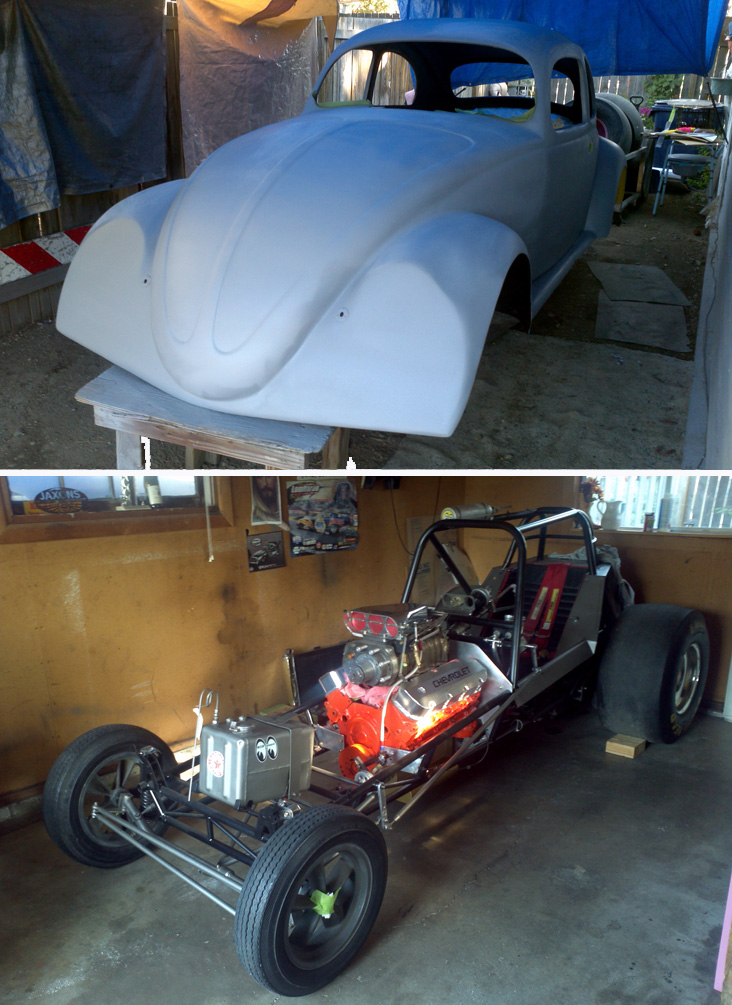 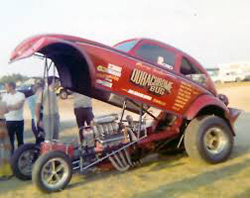 “I just want to make it back to its 1970 look and just show it, maybe make it a cackle car way down the line," he said. "Mostly it’s just a hobby I can do while I care for my 92-year-old Navy vet father and 20-year-old autistic daughter. The Bug is my release, but, man, its an [expensive] hobby, so it will be a while before it sounds off again. The pics are what I'm going for; a far cry from the powder-coated clown car I got.”

Thanks, “Durachrome Dru.” Keep us up on the progress you make.