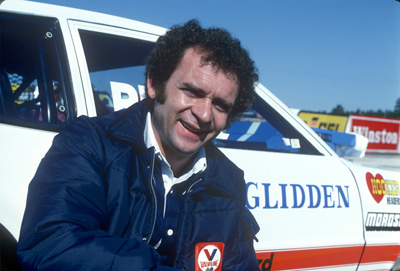 Although Bob Glidden’s declining health had been known to many of us for a few months, and that he was, as his son Billy eloquently told us not long ago, “on the road” to the end, the shock, even five days later, is no less palpable or painful.

I have so many good memories of the Glidden family over the years. I had been a fan for years before coming to NHRA, and my first “road trip” national event as a member of the National Dragster staff was the 1983 Springnationals in Columbus, which Glidden won. The chance to actually interact with him was one thing, but he was incredibly humble and gracious, even though he’d just won his 36th Wally. (Richard Tharp won Top Fuel over Shirley Muldowney and Raymond Beadle won Funny Car; I was in fan-turned-writer heaven.) 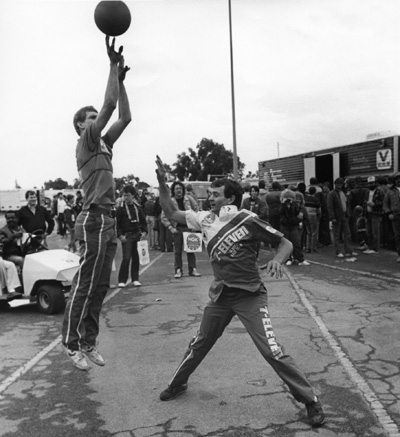 I think we were all enthralled that this gentle Hoosier, his wife, and two sons were kicking everyone’s butts. When I joined the team here, it seemed like it was already well established that the Gliddens were as much our “family” as their own. We watched the boys grow, marry, have kids. We watched Bob and Etta gracefully grow older, but forever can picture the family hitching a hoop to their trailer and playing basketball in the pits as if they were playing in their own driveway. Things just seemed a lot more laid back then.

Check out the photo below, too. It's Glidden in the staging lanes, pitching quarters against the tire of his car with Rusty and Etta right there. And look at the crowd watching. People wanted to be a part of whatever Glidden was doing, even if it was just killing time between runs. I also love the photo below that one. It shows the Gliddens in the winner's circle after winning the 1978 Popular Hot Rodding Championships. Check out Billy and Rusty, covered in grease. They were every part of that victory as their dad was. 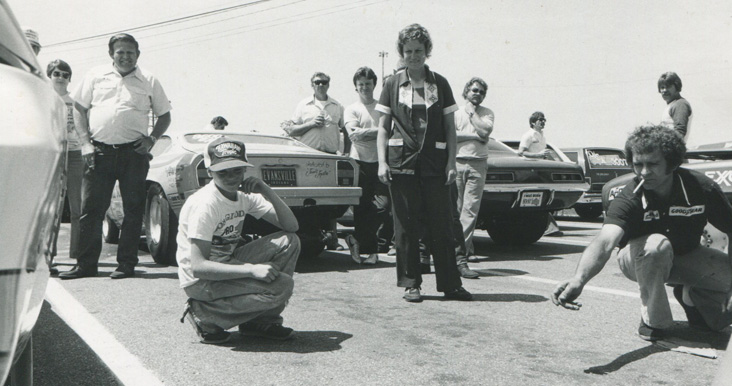 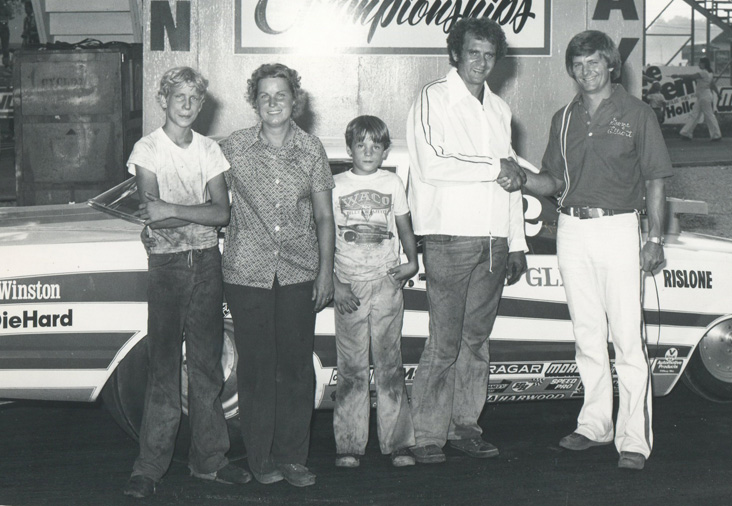 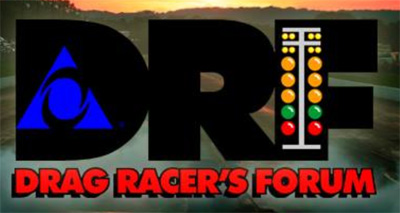 One of my most interesting interactions with Glidden actually came online. In the 1990s, I was an early hitchhiker on the internet and became an active member of a tightknit bunch of racers and race fans on America Online (remember that?). The Drag Racers Forum, created by longtime Division 2 Super Street racer Bob Williams, got together every Friday night to bench race and share our love of the sport. During the 1995 season, while the whole Pro Stock nitrous oxide drama was playing out, Glidden accepted an invitation to join us to discuss allegations and rumors. I’m not sure who got him online but I’m pretty sure he was typing the answers himself. He’d end each answer with DONE, the way someone from his era might have used a two-way radio and saying “over.” It was quaint and sweet and I think we broke some kind of ground there for online drag racing interviews, even if it was to just a dozen or so of us at the time. 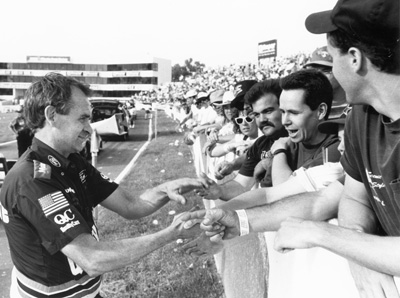 I’ve read dozens of comments on message boards and Facebook this week talking about how accessible he would make himself, whether he was stopping his car in the pits for a fan to take photos or signing autographs in the hotel parking lot well past midnight. He was a man of the people.

And now he’s gone. He’s the third member of the Top 10 of the famed Top 50 Racers list to leave us (preceded by Bill Jenkins and Dale Armstrong) and 18 of the 50 are now deceased, but this one really stings.

With no disrespect meant to anyone, to those of us who came into drag racing fandom in the early- to mid-1970s, Glidden, along with Don Garlits and Don Prudhomme, were the holy trinity of the sport, each the master of his own class. And now we’re one less, and what the heck else could be on my mind and in this this column today?

I spoke Monday to both Dons, to get their feelings about the passing of their fellow legend, and a guy with whom they both shared a lot of winner’s circles and, for sure, a similar work ethic. 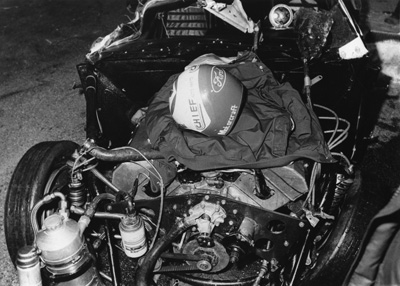 Even though Garlits is and always has been about fast dragsters, it’s clear that he appreciated the Glidden’s tireless work to eke out horsepower, the stories about the Gliddens working for three days and nights on a new intake manifold, not knowing for sure if it would amount to anything, but realizing that without experimentation there is no innovation, which goes a long way to explaining Glidden’s infamous covering of his broken intake manifold after his six-barrel-roll crash in Atlanta in 1986.

“He was one of the greats of our sport, no question about it,” said Garlits. “He’s in my top five, for sure. He didn’t get it handed to him on a silver spoon; he came right out of nothing and did it, and I really respect that. 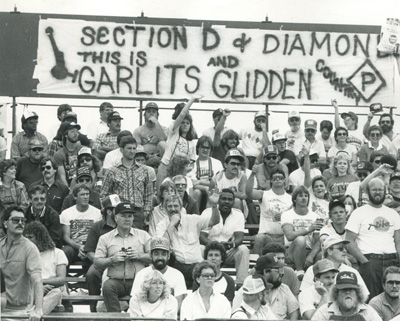 “And such a nice guy. I got along with him so good and went to his house so many times and spent time with his family. He was a very curious guy. He loved the way that the fuel cars ran. He didn’t want to do it himself, but he spent a lot of time in my trailer with me talking about the fuel curves and nozzling for each port.”

Garlits and Glidden shared the NHRA winner’s circle on 11 occasions, or just about a third of “Big Daddy’s” 35 wins, from the 1974 World Finals in Ontario to their triumphant wins in Dallas in 1986 (Glidden’s milestone 50th win). As much as I want to remember it otherwise, the Garlits-Prudhomme-Glidden power trio only shared the NHRA’s winner’s circle twice, bookending the 1975 season with wins at the Winternationals and World Finals.

Prudhomme and Glidden paired up 12 times in “the Snake’s 49 career wins, starting with Indy 1973, which was Glidden’s first career win and Prudhomme’s first in a Funny Car, and ending with their dual wins in Sonoma in 1989. 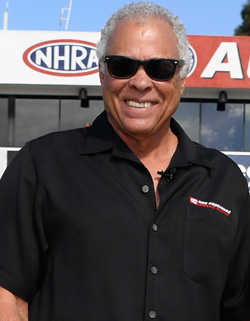 “Man, I’ll never forget those days in the 1970s; those were our heydays,” said Prudhomme, who shared the stage with Glidden 10 times that decade. “We saw each other at the end of the day a lot of times. There was definitely a mutual respect between us. No one worked as hard as Bob Glidden, but he knew I worked for what I had.

“He was just such a hard worker; that’s what he’ll always be known for. He had such a tremendous drive. It was his whole life. He’d work all night long on his stuff looking for more power, and he was doing it by hand, not on a CNC machine.

“We really pulled for each other, too. We both kind of came up the same way, both cut from the same mold; he was a line mechanic and I painted cars. All of the sudden here’s these two guys in drag racing, kicking ass and making a living. I think we both went a lot further than we ever thought we would. I mean, 10 championships? We didn’t think anyone would ever touch those numbers.” 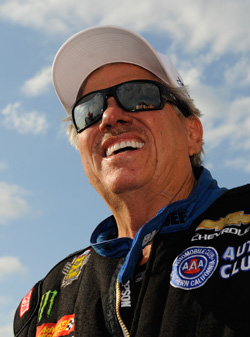 John Force, of course, did surpass Glidden’s totals, but for a long time, Glidden was the man, just as Prudhomme had been. Prudhomme became the sport’s all-time winningest driver with his 16th career win, at the 1976 Gatornationals, where he passed the total held by Ronnie Sox, who had been the all-time winner since the 1971 Supernationals. Prudhomme remained the career wins leader for four years, until Glidden surpassed him with his 31st career win at the 1980 World Finals on his way to 85 wins and although Prudhomme went on to win 49 times, he had no real answers during his early-‘80s funk and Glidden’s total similarly motored away from everyone until Glidden, too, hit the wall. Force finally passed Glidden with his 86th win at the 2000 race in Chicago and has been No. 1 ever since and, in all likelihood, for all time.

Force shared this comment with us: “We all know what Bob Glidden has accomplished in a lifetime. Feats that will never be broken, accomplishments that will never be broken. We know what he’s accomplished and what he’s done. He was the man. But there’s the other side of Bob Glidden, the personal side of Glidden, him as a person.  The love that he had for his family, his boys and Etta. How he always treated everyone with respect, even if it was just in passing. That was the side of the man that I loved the most. He will be missed. I miss him already. But he’ll be with us every day.”

Some more interesting (well, to me) sidenotes: 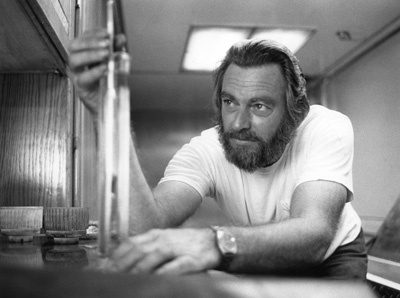 Despite their vast amount of wins, Glidden and Force shared the winner’s podium just three times, the same number of times that Glidden shared it with Top Fuel’s Frank Bradley. The big difference is that “The Beard” only won four times in his Top Fuel career but shared three of them with Glidden: 1976 Winternationals, 1984 Englishtown, and 1989 Sonoma. The 1991 Winternationals, where Pro Stock was won by Darrell Alderman, was the lone exception. I mean, what are the odds?

Glidden faced 29 different opponents in his 122 final rounds and had winning records against 26 of them, including W.J. (12-6), Lee Shepherd (10-9), and Frank Iaconio (8-5). Predictably, it was Shepherd who gave Glidden the most grief, and their Ford vs. Chevy battles are the stuff of legend. Only Darrell Alderman and his controversial Dodge, really got the better of Glidden at 1-4.

The only other drivers with a winning final-round record against Glidden both beat him on a holeshot in their only final-round encounters with him. Richie Zul ambushed Glidden in his only NHRA final, at the 1978 Springnationals in Columbus, while Christian took him down in the 1988 Brainerd final.

How about some more Bob Glidden numbers? Sure … 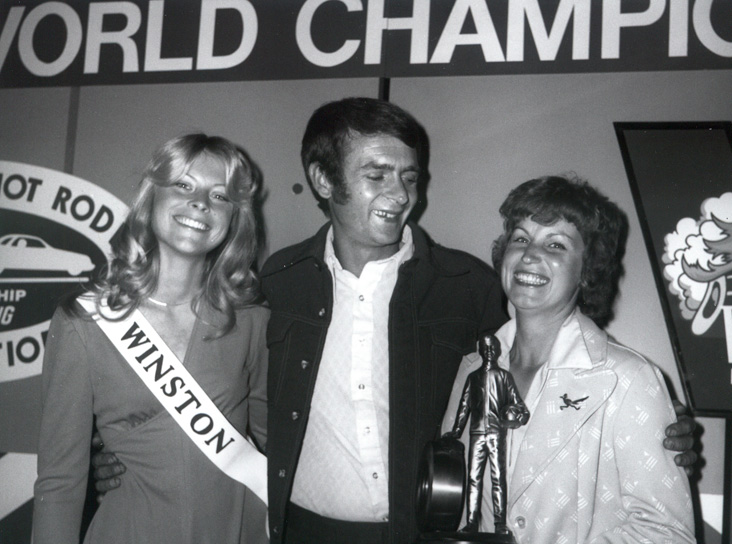 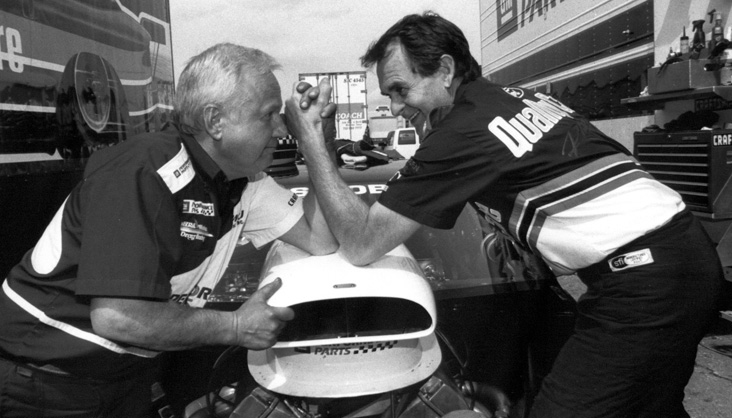 If you subtract from the equation the three Sportsman winners with more victories than him (Manzo, Dan Fletcher, and David Rampy), Glidden shoots up to fourth overall in Pro wins … more than 22 years after his last victory.

U.S. Nationals wins: 9
Class rank: 1 Overall rank: 3
Only Frank Manzo (11) and Tony Schumacher (10) have more wins at the Big Go than native Hoosier Glidden (at the time of the video at right, he was still the winningest). Incredibly, his first career win came at Indy in 1973, and he won it again the following year. He won it back to back in 1978-79, again in 1983, then won an incredible four straight, 1985-88. Fellow Pro Stock racers Warren Johnson and Greg Anderson are next closest with six each.

No. 1 qualifiers: 102
Class rank: 2 Overall rank: 3
As he does with most stats, Force leads the pack with a staggering 155 pole positions. Warren Johnson is second with 138, 16 more than Glidden.

Numbers and stats can only go so far to describe what Bob Glidden meant to the sport and to many of us on a more personal level. He not only was one of the giants of our sport but reflected a lot of each of us. He was the racer many racers hope to be, the epitome of the ground-up success story, the hard-working patriarch, the driven soul for whom pretty good was seldom enough. He pushed himself and he pushed his family, which only helped further push the Pro Stock class and all that it originally stood for, into our fond memories. Thanks for the memories, Bob. 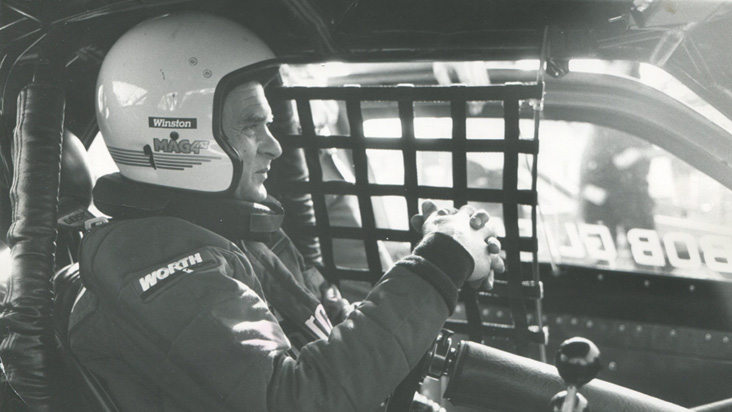 This is the final Dragster Insider of the year. Thanks for all of your support and contributions. I'll see you next year. Happy holidays.