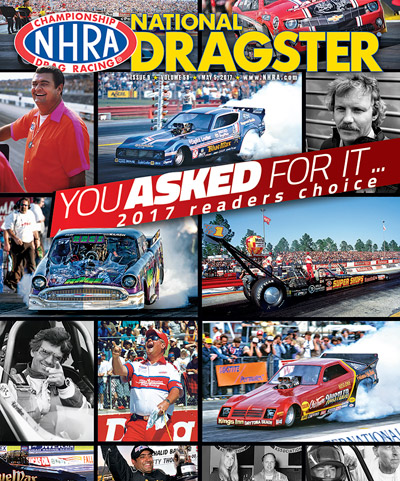 If you’re an NHRA member or buy NHRA National Dragster on the newsstand, you’ll definitely want to check out the new issue, which went online Thursday and will be in mailboxes next week.

The current issue is our annual Readers Choice special issue, which has been an NHRA National Dragster tradition since 1991.

When we first devised the plan for an entire issue in which the content was decided by our loyal readers, we honestly figured the idea would have a shelf life of five to 10 years — 15 on the outside — and then the audience would run out of suggestions. After all, there are only so many racers, cars, and events in NHRA’s history to write about, right?

Each year, we are flooded with new suggestions for articles, an annual treat that continually reminds us just how knowledgeable and introspective our readers are, and each year, there are always a couple of ideas where I mentally slap my head and wonder, “Why didn’t I think of that?”

This year’s septet of reader-suggested articles, as is usually the case, is heavy on nostalgia. Anyone who follows this column knows how much I love the history of the sport, so being able to devote and manage a whole issue to some of the heroes and moments that created the sport’s legacy is always going to be good with me. 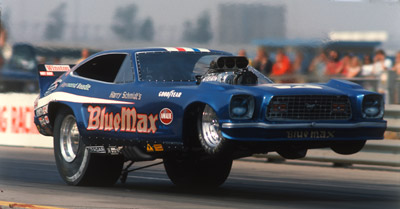 Over the years, I’ve done reams of research on some of the iconic drivers and teams in our sport, so I quickly grabbed two of the suggestions — histories of the fabled Chi-Town Hustler and Blue Max Funny Cars, suggested by Jim Edwards (Milledgeville, Ga.) and Mark Jewett (La Vista, Neb.) — as my own. You’ve seen bits and pieces of this work in the obituaries I’ve written about John Farkonas and Pat Minick of the Hustler and Raymond Beadle and Harry Schmidt of the Max, as well as interviews with the likes of Austin Coil, Richard Tharp, Frank Hawley, and others that have been spread out over multiple columns over multiple years, so to be able to pull them all together into comprehensive stories was as big a chore as it was fun and satisfying. 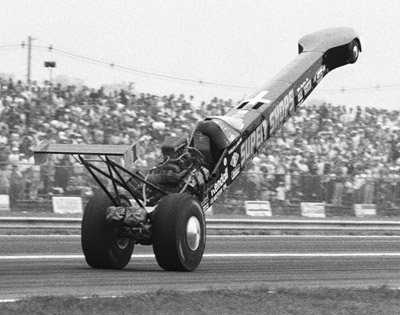 Senior Editor Kevin McKenna, who, like me, was in attendance at the 1986 Summernationals and witnessed firsthand Don Garlits’ unforgettable blowover, seized the suggestion by Bob Tadayesky’s (Waterville, Ohio) to look back at that wild moment. McKenna went one better by framing the blowover in the context of Garlits’ memorable season-long battle with Top Fuel’s young wolf, Darrell Gwynn. McKenna, a huge fan of doorslammer racing, was also quick to jump on the suggestion by Dyan Lover (Port Alberni, B.C.) for a history of the exciting Pro Mod class.

Candida Benson, former ND senior editor turned managing editor of special projects, returned to the fold to pen a history for us of the NHRA Jr. Drag Racing League, as requested by Roy Young (Garland, Texas). Benson, who as many of you know is also the editor of NHRA’s Jr. Dragster magazine, was the natural choice for that assignment, which is certainly timely as the league is celebrating its 25th anniversary this year.

Associate Editor Jacob Sundstrom, still the new kid on the block, got handed a trio of stories to exponentially increase his immersion into the deep history of the sport: a feature on legendary Chief Starter Buster Couch, a look back at the dramatic finish to the 1990 season, and a story on former Top Fuel world champ turned stunt driver Kelly Brown. 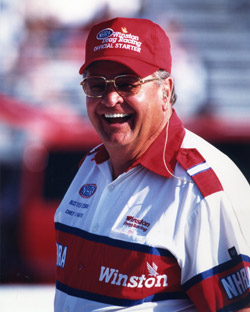 The Buster story (requested by Bo Olsson of Grycksbo, Sweden) was probably the toughest challenge. I mean, how do you describe Buster to someone who has never met him? I pointed Jacob to some old articles I’d written about Buster, and he even found a video online of an interview with Couch, and soon enough he was channeling NHRA’s version of Foghorn Leghorn like a pro. Jacob is a big Joe Amato fan, so the 1990 World Finals recap of his tremendous battle with Gary Ormsby (requested by Readers Choice regular Billy Kleinspehn of Sinking Spring, Pa.) was natural for him, and I also sent him to chase down Brown for a story requested by Al Kean (Prince George, B.C.), who is also a regular contributor with his column on NHRA.com. Incredibly, K.B. still had the same number he had when I last spoke to him 20 years ago, so Jacob was able to get the firsthand account of his twin careers.

Readers Choice is always a lot of fun to work on and produce and, I hope, for you all to read. A lot of you get your weekly dose of nostalgia for free here (which also has a kind of Readers Choice vibe; I’m always open to suggestions), but to be able to put the stories into print just gives them that little something extra.

If you’re not a member or can’t find ND at your local speed shop/hangout, you can always buy copies directly from the NHRA Membership Department by calling 8000-308-NHRA.