How Frank Hawley came to drive the Chi-Town Hustler

Frank Hawley drove the Chi-Town Hustler Funny Car to two NHRA championships but how he got to drive the fabled machine is a tale of chance and fortitude. Even he didn't think he would get the job.
27 Jan 2017
Phil Burgess, NHRA National Dragster Editor
DRAGSTER Insider

Although the new-look website prevents me from carrying over the familiar graphical banner and “The stories behind the stories” motto that headed this column for almost a decade, the motto and mantra still remains part of why I love this column.
The opportunity to get behind the headlines of drag racing history that we all know so well is intriguing and exciting to me, a guy for whom no bit of minutia is too small. How many times Don Garlits had lane choice in his life and went left? Yes, please. Shirley Muldowney’s helmet size? Tommy Ivo’s good-luck charm? I wanna know.
So, as I was interviewing Frank Hawley last week for my tribute to the late Chi-Town Hustler driver Pat Minick, it occurred to me that I’d never heard the story of how the young Canadian landed the ride and carried its iconic name to new heights of success. So I asked, and he was more than happy to share what really was a magical and unexpected journey. 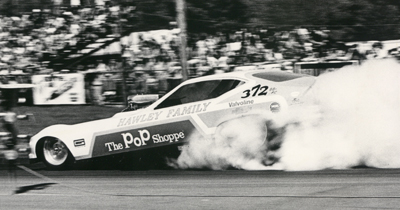 When Pete Williams left the Chi-Town cockpit after the 1979 season, the name “Frank Hawley” was not even on the radar of Austin Coil and Minick as a replacement. And why should it have been? Although their paths may have crossed at a Midwest match race sometime in the 1970s while Hawley was honing his skills in Brian Noakes' BB/FC or his family-owned Pop Shoppe Vega or '23-T altered, the young driver from Ontario, Canada, was not exactly a household name. And, as his fortunes and opportunities had dried up back east, like a pioneer of old, Hawley had headed west in search of fame and drag racing fortune, or at least a ride in the land of nitro plenty.
“I was homeless and living in my truck in California,” he admits. “I’d run out of money for the alcohol car and was looking for any kind of break. Simon Menzies, who I knew from racing alcohol cars, was the one who told me about the opening. Simon worked at Simpson and tracked me down through my mom because no one had cell phones in those days, and Simon told me that Pete Williams had just quit and that I should put my name in to drive the car. My first thought was, ‘No one’s going to hire this alcohol-driving kid from Canada to drive the Chi-Town Hustler.’ “
Just so happens that Menzies and I are good email pals from way back (didn’t hurt either that he sent me a case of wine from his Coyote Creek Orchards winery), so, in the interest of fair reporting (and an even better story), I reached out to him for his side of the Hawley-gets-hired story. 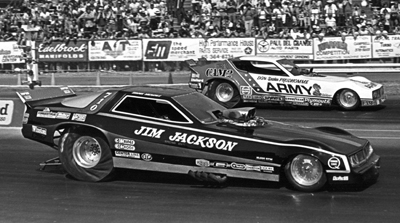 Truth is, Coil and Minick had already offered the job to Menzies, who had just stepped out of the cockpit of Jim Jackson’s nitro burner, where he had achieved a degree of success and respect from his peers, but had already committed to Fred Crow at Simpson, had a new home, and a child on the way.
“I knew the Hustler ran a lot of dates and I wasn’t ready to hit the road again,” Menzies told me earlier this week. “They asked  if I could recommend anyone. I thought of Frank right away but I wanted to talk to him first. I met Frank while running BB/FC on the AHRA circuit in the Midwest. His operation reminded me of when I ran my own car before I partnered with Dale Armstrong and later with Jim Jackson: rarely more than one helper, marginal, worn-out equipment, sleeping in the truck, and depending on winnings to get to the next race. All that aside, when he managed to glue her together he ran real well. I had a lot of respect for his driving and mechanical ability. So we had a lot in common, two kids from small towns in Canada who became competitors and friends. 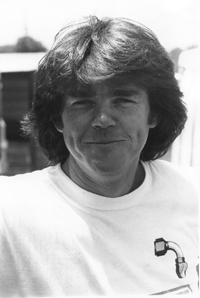 “I knew he had parked the Hawley Family car some months before because of lack of funding and wasn’t sure if he was getting ready to run again. At first he thought I was lying and then just plain crazy. ‘Why would they want me, they don’t even know me?  I’ve never even driven a double-A car.’ I told him  it was worth the try and I would make the call if he was serious about talking to them, and also suggested he compile a list of everything he had done and create a racing résumé so they would have something to look at if they were interested in him.
“I didn’t know the Chi-Town group well but ran against them a few times with Pete Williams driving. To be honest, I always wondered who recommended me. Endorsing someone for a flopper ride was pretty much a no-win situation; more often than not it didn’t work out and both parties ended up telling two or three hundred of your closest friends that you were an idiot and couldn’t be trusted. But I made the call and recommended Frank. Seemed to work out all right. I can’t take all the credit. As I recall they asked Fred Mandolini’s opinion of Frank after I recommended him and he must have agreed with me.”
Convinced that he had at least a slim chance of landing the coveted ride, Hawley put together a résumé that he sent to Minick, and then called everyone he knew in Chicago and asked them to put in a good word for him. 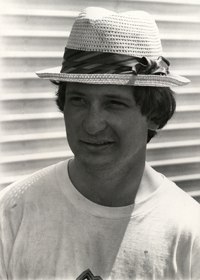 “I didn’t think anything would every come of it,” he admitted. “Then I called home one night and my mom said, ‘Austin Coil just called.’ I told her, ‘Mom, I’m having a bad day. Don’t make stuff up.’ But he had called, so I called him and he asked me to come to Chicago to meet them and interview for the job. I told him, ‘Listen, I’ll be honest. I’m sleeping in my truck and I haven’t got enough money to get there, but if you let me drive one weekend and pay me for a week’s work, I’ll be there in two days.’ He agreed.
“I borrowed some gas money and drove to Chicago. It was winter, of course, and I had no place to sleep. Now, you can sleep in your truck in Southern California in the winter but not in Chicago, so I called my buddy [Alcohol Dragster racer] Al DaPozzo, who was like my best friend, and asked if I could stay at his house for a night. He said ‘Sure,’ and I ended up staying with him for three years."
(I doubt very much that the following anecdote is true, but thought I’d share it anyway, because it was probably said, at least in part in jest. According to an old Hawley bio I found in his file, when he went for his interview, a prime topic was his -- he says undeserved -- penchant for crashing cars. Coil and Minick told him they couldn’t afford to have their car crashed so, as a reminder to the young shoe, they’d cut the rollcage off and then soldered it back on. If you crash the car, they told him, the roll cage will come off and you will probably die. If, however, you crash the car and do not die, we will finish the job. Funny stuff. I can actually see Coil saying this.) 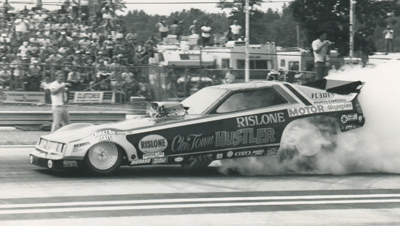 Anyway, Hawley is told to report for duty at the Chi-Town shop the next day, and worked on the car all week in anticipation of that weekend's two-of-three with Kenny Safford at U.S. 30 Dragway for the biggest audition of Hawley’s life. How do you fill the shoes of a legend with other legends watching intently? Well, surely you’d get some pointers, right? Nope.
“Austin game me no instruction,” said Hawley. “Nothing. I’d never driven a nitro Funny Car in my life, but there was no, ‘Well, this is how we warm the car up' or 'This is how long the burnout should be.' Nothing. He just said, ‘You’re the driver; drive the car.’ “
“I wanted to do a good ‘Chi-Town’ burnout but didn’t want to over-rev it. So I just winged it. I later explained to him that I thought I’d been a little up and down trying to find the right spot on the throttle and he said – in what is probably as good a compliment as you’re going to get from Austin Coil --  ‘Some people never find the right spot; that was fine.’ I guess that meant I was doing OK.”
Hawley beat Safford three straight. 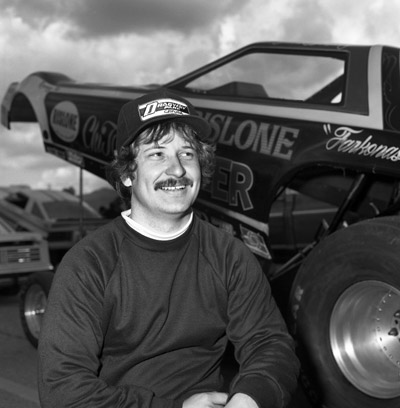 "I didn’t even have a nitro Funny Car license," Hawley remembers. "I beat Kenny three straight and he signed my license. Somebody later asked him, ‘How could you sign his license? You were racing him,’ and he said, ‘Well, he was in front of me the whole time so I saw him run.’ True story.
“Anyway, after the race, we went to dinner and at the end of dinner, I still didn’t know if I had the job. I asked Austin, ‘So, do you want me to show up for work tomorrow?’ He said, ‘Yeah, you can drive another week’ and it just went on and on like that every week. The inside joke is that even after we’d won the world championship in 1982, he’d never truly hired me. It was like a week-to-week deal. After we won the championship, I finally asked him if I’d been hired, and he finally said yes.”
Hawley drove the Hustler up through 1984, winning seven events and, of course, two NHRA world championships.
So, let that be a lesson to you, kids (and adults). Dream big, take a chance. You never know what’s going to happen.