Eddie Hill was one of the most popular Top Fuel drivers of the 1980s and 1990s, but went out with a bang -- literally -- on an explosive final run in late 1999, a moment memorialized by a Kenny Youngblood painting and remembered in this week's Dragster Insider by Hill himself.
17 Nov 2017
Phil Burgess, NHRA National Dragster Editor
DRAGSTER Insider

It started innocently enough, with an email from longtime Insider reader/contributor Andy Perreault (“the railroad guy up near Pacific Raceways,” as he always unnecessarily reminds me), asking me if I could tell the story behind the photo at right, which shows fan favorite Eddie Hill’s Pennzoil “Nuclear Banana” going, well, nuclear and blowing an engine to smithereens. He’d seen the image on one of the Facebook groups he belongs to and wanted to know what I knew. It looked vaguely familiar and as a reformed “crash shooter” myself I thought I would have remembered it who’d captured the incident so well, but couldn’t.

Turns out that it’s not a photo at all, but an amazing piece of artwork by one of the sport’s most renowned artists, Kenny Youngblood (yes, ‘Blood did it). Titled "Y2Ka-Boom," it’s important more than just for the artistry or to show what can go wrong with a nitro engine – it also depicts The Last Ride of Eddie Hill. At least in the Top Fuel class where he was a world champ, event winner, and record setter. 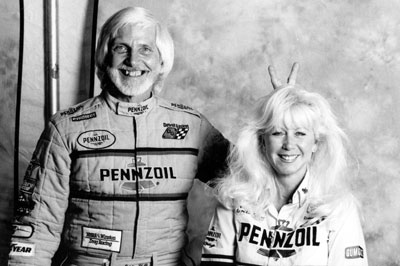 Unless it’s through vintage video, NHRA fans of the last decade and a half never got to know the Hill clan –- spectacularly-friendly Eddie, charming and supportive wife Ercie, good-natured right-hand man “Fuzzy” Carter and wife Jana, plus Hot Dog the dachshund and "Monkey Bat” the cat –- nor how astoundingly popular they were. They weren’t immune to pressure like anyone else, but sometimes their genial coolness under fire – Eddie had walked away from some tremendous wrecks, both in drag cars and drag boats, always seemingly emerging flashing a big smile and a thumbs up -- made them seem like they were from another planet and their performances sometimes were out of this world. I miss them. They broke records on land and water like records were going out of style, and Eddie was voted to the impressive 14th spot on the 2000 Top 50 Racers of NHRA’s first 50 years. (You can read all about him here.)

Anyway, remember how I was saying that fans of the last decade and a half never got to know him? (I mean, how could you forget because it was just around 150 words ago.) The reason is that from the date of this incident, Oct. 30,1999, not only had Eddie not driven a Top Fuel car again but neither he nor Ercie has been to a dragstrip since. They’re the all-time hall of famers when it comes to leaving the sport cold turkey.

I can’t say that I blame them. 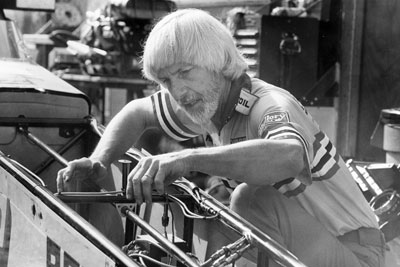 The incident, which occurred during his third qualifying run at the Matco Tools SuperNationals at Royal Purple Raceway in Houston was his second cataclysmic explosion in as many events. At the O’Reilly Fallnationals the weekend previous at Texas Motorplex, against Doug Herbert in round one, something went amiss in the #7 cylinder and led to a huge explosion that broke the top left framerail and bent the right side and dented the rollcage and left him with a bruised lower back and right shoulder. Hill lost the round (Tony Schumacher went on to win his first Top Fuel title in its wake) but, not wanting to disappoint their fiercely loyal Texas fans, the team quickly prepared its backup car for the Houston event.

“I would like to say running Houston will be fun, but I think I'll wait till after the first round of qualifying before I can say anything,” he said at the time. “I'm still sore and I'm sure it will get worse before it gets better.”

He had no idea how prophetic those words were as in the midst of his third qualifying run in Houston, all heck broke loose again. I reached out to Eddie last week for his remembrances, and he was kind enough to share them with me.

“That was a brand-new block on its first run, and it did not go the full quarter-mile before the block basically shattered like glass at 4.38 seconds into the run,” he explained. “It was a defective cast block that was extremely porous and brittle, actually a reject block that should have been rejected/scrapped, but instead was sold to us as a good one. After this, and probably partly because of this incident, NHRA made billet blocks mandatory -- no more cast blocks allowed.

“I have frame-by-frame video showing the block coming apart, one cylinder head leaving the car with one side of the block still with it, and after the parts had all scattered into an area about three times the normal engine size. The hot parts (headers) ignited the hot oil and all that raw nitro spraying around. The engine came apart several frames before the fireball, easy to see on the video. Most people that saw the incident live, probably thought that there was an internal explosion that blew the block apart -- not so. All the internal parts -- crank, rods, pistons, bearings, etc. -- were fine. 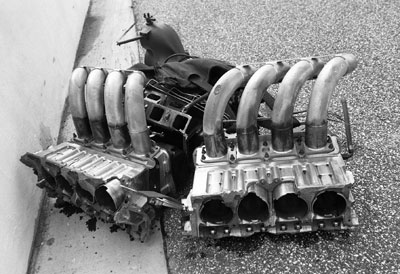 “The intense pressure wave from the fireball blew my head and shoulders so far forward that my butterfly steering wheel put a prang in the front of my helmet! In one frame, my head is in the normal position, in the next, it is against the steering wheel, and the next it's back in the normal position again. And all this with my shoulder harness literally as tight as my crew guy can pull them, while I'm holding a deep breath, so my belts leave me only enough room to breathe, no more. 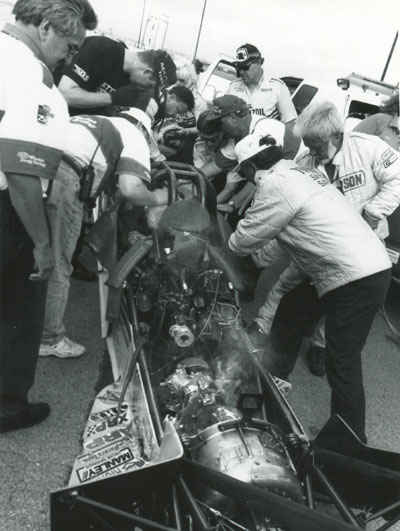 "So, when I got shoved/blown that far forward, it compressed my spine so much that something had to give -- and it was my L-1 vertebra- 40 percent compression fracture, and the most pain I've ever felt. It hurt so bad I thought a piece of frame tubing or something had punctured my back.

"So my last ride ever at a dragstrip was out of there in an ambulance … like it also was at my last drag boat race! I've never been back to a boat or a car drag race. But I'm OK now … except for the brain damage, which the doctors all said was a pre-existing condition, or else I wouldn't have been going that fast, anyway!” 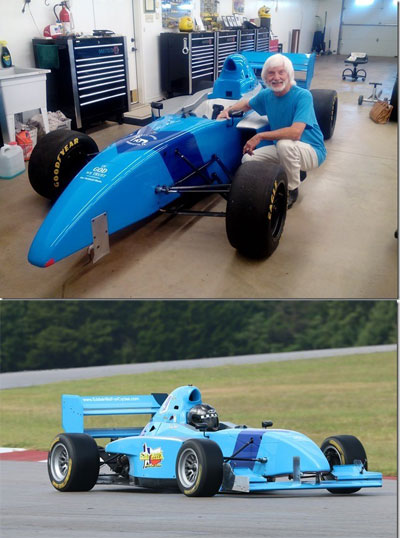 The Hills may not be seen at the dragstrip or liquid quarter-mile, but the good news is that they’re still racing, albeit on road courses now. Eddie apparently knows how to not only turn left and right, but very well. He won the yearly championship in FAA (Formula Ariel Atom) four straight years (2013-2016) and this year graduated to a Pro Formula Mazda, which Ercie bought for him.

“Ercie and I are thankful to be in good health and are happy, living in our dream home/race car shop on a 500-acre ranch just west of Wichita Falls, Texas,” he said. “Ercie raises Red and Black Angus cattle, Tennessee Walking Horses, and coastal Bermuda hay.  We attend The Cowboy Church in nearby Henrietta, Texas, and give thanks daily for all God has done for us.

“We work two days a week at our motorcycle dealership – Eddie Hill’s Fun Cycles – and we take our two mini dachshunds – Hot Rod and Lady -- to work with us. We’re blessed to be enjoying our 51st year in business at the same location.  We’re fortunate to have the oldest Honda and Kawasaki dealership in Texas, along with Yamaha, Polaris, and Argo.

“We’d like to say a big Texas hello to our fans and say special thanks to those who helped, encouraged, and supported us during our drag racing career.  They were what made racing fun for us.

“Starting with my first trophy earned with a Cushman motorscooter in 1949, and with the latest ones we’ve won with our road racing, I’ve now won trophies in each of the last eight decades, and remain the only person to have won the Top Fuel championship and held the national records on land and water. We have been blessed beyond measure! Thank you, Lord!”

And thank you, Eddie, for sharing with us. I know I speak for your legions of still-fans in hoping we see you again at an NHRA event.

The Story Of “Y2Ka-Boom!” by Kenny Youngblood 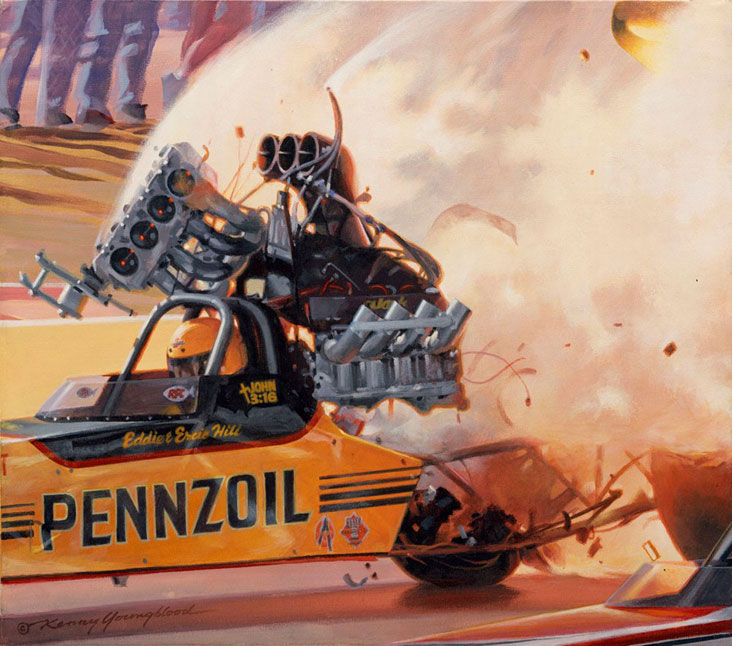 As a rabid drag racing fan, what I call the “Out Of Chassis Motor Experience” is the ultimate “happening” in the entire world of motorsports. It is that rare and incredible occurrence when the entire motor blows itself completely out of the framerails! OMG! This “fail” is unique to drag racing, when “nitro seeks its own level” after (as John Rodeck used to say) the occurrence of “an event.”  This mechanical phenomenon occurs about as regularly as Haley’s Comet, but is equally if not more spectacular.

My first sighting was at OCIR, when Roland Leong blew the motor out of the Hawaiian. Driver Mike Dunn had the honor of towing his flopper back to the pits “Sans V-8!” I witnessed it again at Firebird Int’l Raceway in Phoenix, when the Donnie Couch-tuned McGee Brothers Top Fueler dumped the crank in the lights, launching the quad-cam out of its chrome moly nest to drag alongside the car by the fuel lines. Nice!

When, in the late 1990s, “Engine Eddie” Hill accomplished the feat not once but twice, I knew I had to capture it on canvas. The problem was, I had no reference photos to work from.

When the good Lord points us in a direction, He always supplies the means. In this case and completely out of the blue, I ran into Ed Golden at the SEMA Show. Ed, a longtime friend and one to whom I’d like to say I supplied some inspiration in his formative years, was now head designer at Ford Truck. Ed happened to mention that he had some great shots of Eddie Hill blowing the motor out of his car at Houston; he said he was in the finish line stands with his motor drive running when Eddie did the deal.

Normally I take considerable “artistic license” when working from photos, but in this case Ed’s were so good that no changes were necessary. As depicted in the painting, you could still see fuel coming out of the fuel lines and the spark plugs glowing in the head. The rear tires amazingly were not punctured. What looks like a tire coming apart under the car is actually the diaper; the right rear tire can be seen intact. The title for the painting played off the predicted catastrophe when, in the fall of 1999, the world was bracing for the “Y2K” computer reset collapse.

I gave Eddie the 24x24-inch acrylic on canvas original, which now hangs alongside “First In The Fours” in the Hills’ Wichita Falls, Texas home.

So there you go, Insider readers. Hill blew it, 'Blood drew it, and I went through it so you could view it. Thanks to all involved who helped me do it.