The Art of Matt Levonas, Part 2

Last week I showed off some of the marvelous artwork by NHRA’s Northwest Division Director Matt Levonas and I’m back with more this week, including some cool 1970s Funny Cars.
24 Feb 2017
Phil Burgess, NHRA National Dragster Editor
DRAGSTER Insider

Last week I showed off some of the marvelous artwork by NHRA’s Northwest Division Director Matt Levonas (you can find the article linked in the bar at left), and I’m back with more this week.

As you all know, I’m a sucker for 1970s Funny Cars, so this group was a huge hit with me. As with last time, I asked Matt to share his comments about each of his works. Enjoy! 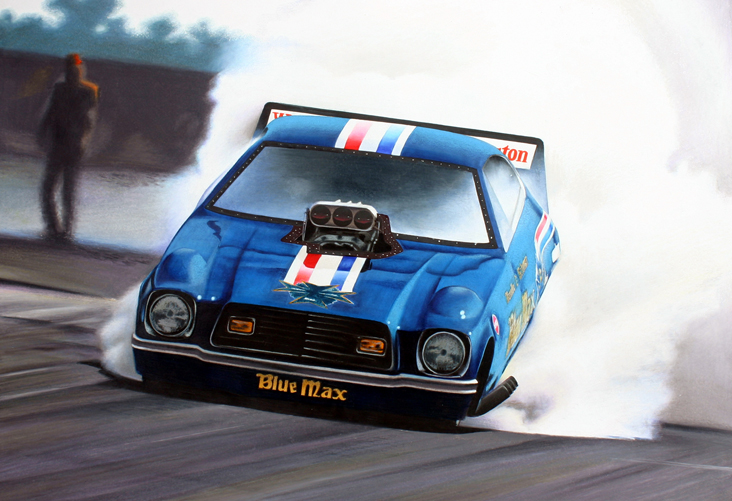 Blue Max (pencil): From the moment Raymond Beadle took over driving chores for Harry Schmidt, the Blue Max was always one of the cars to beat at the track. In 1975, his first year in the Blue Max car, he beat Don Prudhomme in the Indy final. In the spring of 1976 Beadle had a 30-0 match-race record against Prudhomme, Ed "the Ace" McCulloch, Tom "the Mongoose" McEwen, "Jungle Jim" Liberman, and "T.V. Tommy" Ivo. 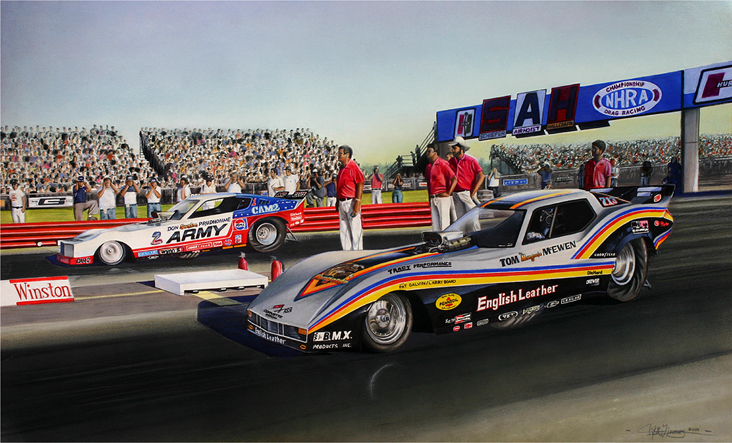 Excitement at Indy (pencil): Coming just days after losing his son, Jamie, to leukemia in 1978, McEwen found himself in the Indy final against Prudhomme. Prudhomme had been a little quicker all day but when it counted in the final McEwen ran quicker for the victory. This art piece in particular is special to me as it was one of my first commissioned works and even more special as McEwen himself commissioned me to do the work. Since having the opportunity to meet Tom many years ago, I feel very fortunate to have him as an advocate and friend of mine. Since doing completing this first one, I’ve had the opportunity to complete a few more with Tom. Even after hanging up the helmet decades ago, he’s still one of the great ambassadors of the sport.

Moby Dick vs. The Detroit Tiger (pencil): This is another commissioned work by Ezra Boggs. Ezra campaigned the Moby Dick Funny Car from ‘77 till ’85, primarily match racing, but he made a few NHRA events along his travels. For the commission, Ezra wanted to go back to Pomona up against Tom Prock, a friend of his at Pomona. The clutch dust and heat waves are kind of fun to portray and give it a different feel and perspective than a starting line close-up look. 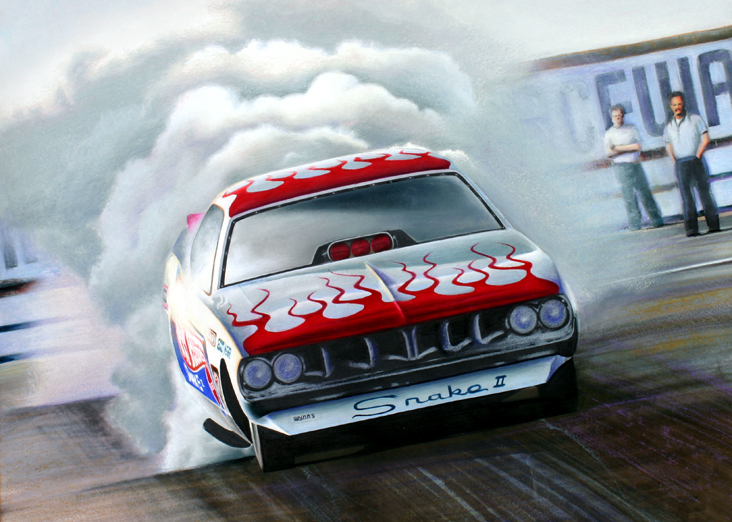 Snake II (pencil): It’s hard to find a car with a more badass look than Don Prudhomme’s 1972 Barracuda Funny Car. Pictured here at OCIR, having the warm sunlight behind the shade of the cool-colored smoke just makes the mix of warm and cool colors that much stronger. 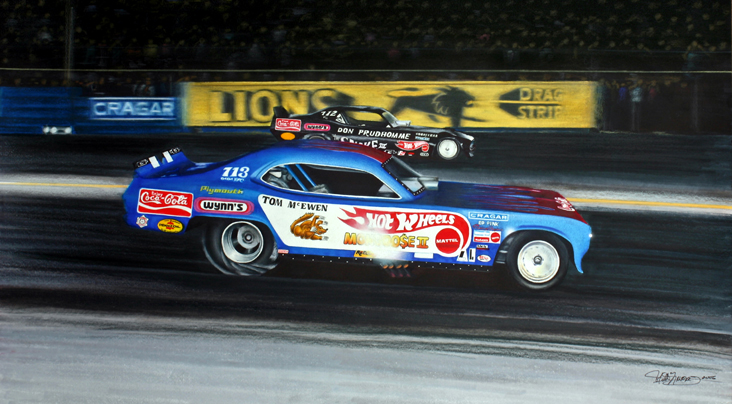 The Last Drag Race (pencil): December 1972 marked the Last Drag Race for the legendary Lions Drag Strip in Long Beach, Calif. With a capacity crowd in attendance to help say goodbye to the historic track, the air was electric with excitement as the Funny Car final came up to the line. It was McEwen facing Prudhomme, two racers who got their starts at Lions. Prudhomme was running unique black Snake III body as he had destroyed his previous Snake II body the weekend before in a match race. As the cars roared off the line, the crowd closed in behind them awaiting the results. A loud cheer went up from the stands as it was “the Mongoose” beating “the Snake” to win the Last Drag Race at Lions. 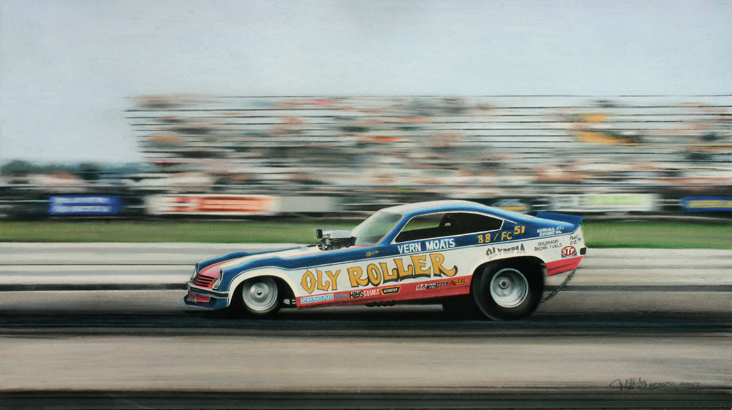 Oly Roller (pencil): What more can be said about Vern Moats? Growing up and then working in Division 5, I had the fortune to meet the man and get to know him over the years. His Olympia beer-sponsored Oly Roller car he ran in the late 1970s was one of his most famous. 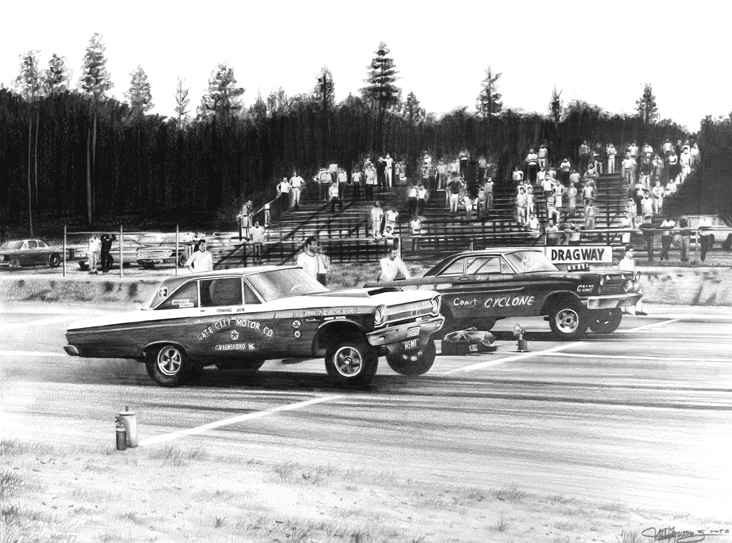 Paper Tiger (pencil): 1965 was a big year for A F/X cars. Wheelbases were being moved, bodies lightened, and anything that could be done within the “framework” or the rules to gain traction and advantage was being taken to the limit. With the ultra-thin acid-dipped panels and bodywork treatment the Sox & Martin car received, the car got the nickname “Paper Tiger.” That summer the ’65 Plymouth Belvedere “Paper Tiger” and “Dyno Don” Nicholson’s Comet Cyclone were two of the hottest F/X cars in the nation. They faced off up and down the East coast. Pictured here, Ronnie Sox is getting the jump off the line against “Dyno Don” at Richmond Dragway. 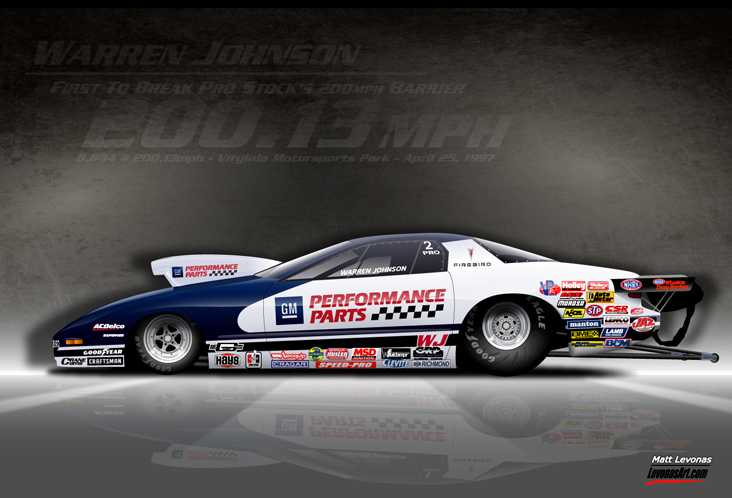 200 (digital): With the hectic lifestyle and travel of life as a division director, getting the time at home to composing and completing fine art can be quite challenging particularly during race season. Digital art can be a good alternative way to create art without all the materials, time, and space needed for drawings and paintings. Just as with pencil and paint, the fun is in creating a three-dimensional scene so that the objects come to life. I often try to recreate a studio photo-shoot-type scene when doing digital renderings of cars. I’ve always loved the look and lines of the Firebird Pro Stock cars. Of course one of the most significant was the car Warren Johnson first broke the 200-mph barrier with in 1997. 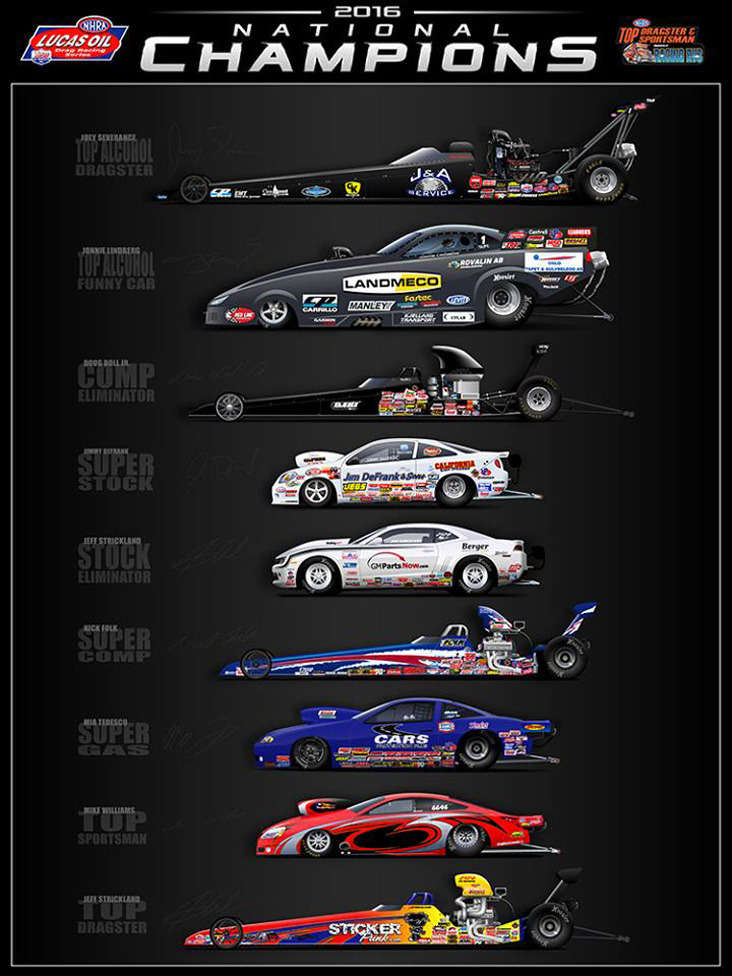 2016 Lucas Oil Champions (digital): With the bulk of my involvement being in the Lucas Oil Series I wanted to create a collage with all of the current Lucas Oil National Champs for my office wall.

Thanks again to Matt not only for sharing his work but also explaining how and why they were created. I hope you enjoyed seeing them. You can check them all out on his website, www.LevonasArt.com.

I’ll see you all next week.

Phil Burgess can be contacted at [email protected]