With the Top 20 Funny Cars list whittled down to just three – “Jungle Jim” Liberman’s '73 Vega, Dale Pulde’s '77 War Eagle Trans Am, and John Force’s '96 Castrol Firebird -- and the top two not to be announced for three weeks (drama-building period, I guess), I have the chance to take a look at the three finalists, beginning with Pulde.

Don’t read anything into me putting Pulde up to bat first; he was just the easiest guy to get ahold of. Force is no doubt in full “game-face” mode and unreachable as he prepares to head for Dallas this weekend (I’ll be right behind him), and, of course, “Jungle” is reachable only through a psychic medium (if you believe in that stuff), but I do plan on reaching out to his first lady, “Jungle Pam” Hardy, for her thoughts.

To be honest, a lot of people – Pulde included – are surprised that the War Eagle is in the final three, but in my mind, his presence is a testimony to the complete package that Pulde and partner Mike Hamby presented. As Insider reader Dave Ferrin opined, it was “the perfect Funny Car in looks, driver, and performance.”

NHRA's Lewis Bloom did this interview with Dale Pulde in May in Topeka, where he was honored as the event's 50 Years of Funny Car dignitary.

I think that, despite the list’s intention to delineate specific cars, people also voted for the drivers, probably in part because many of the drivers who are represented on the list had numerous cars that could have made the list. Why “Jungle’s” ’73 Vega and not the ’75 car that won the Summernationals or the ’70 Camaro that ran 120 dates that season or his early Chevy IIs? Why not Pulde’s wild Buick Regal or any of Force’s Mustangs?

So let’s begin by taking a look at some of Pulde’s career “bonafides.” For starters, I’ve heard and read many times that people think Pulde is the most gifted and natural Funny Car driver the sport has ever seen, which is saying something when you stack him up against guys like Force and Don Prudhomme and countless others. He certainly has the experience, having driven, by his accounting, roughly 70 floppers, from Charlie Wilson’s Camaro in 1968 through the War Eagle nostalgia Funny Car. He earned nine top-10 NHRA finishes (including a career-high third in 1985) and six NHRA national event wins, and with three championships, 20 victories, and 15 runner-ups, he’s still the winningest driver in IHRA history, and he’s a member of the International Drag Racing Hall of Fame.

Of course, not all of these were with the ’77 Trans Am in question, though he did win the 1978 Gatornationals with a very similar car. His next NHRA win after that was with the War Eagle Challenger (perhaps his least attractive car, IMO; sorry, Dale) at the 1980 Winternationals, but that first War Eagle still resonates and no doubt cast favorable light on every one that followed.

Asked to put a finger on the car’s popularity, Pulde notes that the car was one of the few at that time that not only was devoid of corporate backing but also had a catchy name.

Think about it: Prudhomme was already saluting the red, white, and blue colors of the U.S. Army, Billy Meyer’s Camaro was motivated by his father’s SMI company, “240 Gordie” Bonin’s Trans Am was bubbling up green and white, the Blue Max was emblazoned with corporate backing from NAPA Regal Ride Shocks and English Leather, and even the Hawaiian name on Roland Leong’s car was sharing billboard space with Power Gloss and Avanti antennas. Other than holdout old-school rebels like the Chi-Town Hustler and L.A. Hooker and a few others (Eastern Raider, Boston Shaker, et al), if there wasn’t a corporate name on the car, it was probably emblazoned with the owner’s name(s). So the War Eagle stood out, and an eye-catching paint scheme didn’t hurt. 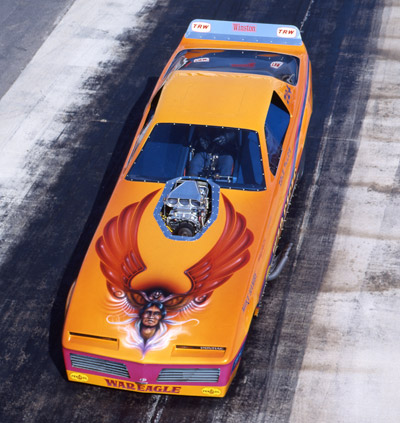 Legendary SoCal paintsmith Bill Carter shot the colors onto those early War Eagles (John Pugh did the paint on the Miller Warrior cars that followed), with every version getting nicer and the Indian/eagle graphic on the hood getting more intricate, first with Pugh and then Glen Weisgerber doing the handiwork.

The choice of the War Eagle name was part plan, part serendipity. Pulde was floating from car to car after leaving the longtime employ of Mickey Thompson at the end of the 1974 season before hooking up with Hamby. “We knew we needed a name like Blue Max or something like that, something catchy,” Pulde remembers. “Mike went to the library one night and came home with a list of possible names. I was watching a cowboy movie when he strolled back in, and the Indian guy in the movie was badass, so we liked War Eagle right away. I called Steve Evans and some track operators and asked what they thought, and they all thought it was catchy. Kenny Youngblood had already done up a rendering for me for one of Joe Mundet’s cars, and we liked those colors, so we used that as our guideline.

“Everything on the car was anodized – and even before we had anodizing, we always had everything polished –and we didn’t rope off our area from the fans and got along with everybody. I wanted a car that would run good, so I told Mike we wouldn’t take it on the road until we could do that and not hurt parts. And we were able to do that. That first year was great. We hurt so few parts that [Joe] Pisano called me after we set the [national speed] record in Martin [Mich., in August, at 245.23 mph] and said, ‘Hey, I thought we were pals,’ because we were burning so few pistons, we weren’t ordering any from him, and he thought we were getting them from someone else. I told him I still had 10 of the spare 20 I had taken on the road. The car ran good – even though it had a little fuel pump and stock stroke, it ran 240s like nothing – and didn’t hurt anything. I think all of that made a difference in people's minds.

“I’m very surprised, humbled, and honored to even be in the top 20, let alone the top three,” Pulde said, then added with a smile, and a nod to Liberman’s famed backup help, “and maybe if Hamby had [been a little better looking] I might have gotten even more votes.”

Bill McLauchlan was one of many who threw their support behind Don Prudhomme’s Army Monza as the No. 1 pick in the list. “That car dominated two seasons of every type of racing, from national events, match races, highly regarded open events, etc.,” he testified. “I grew up at Al Bergler’s shop in Detroit and went to the races all the time. In 1976, Al ran the yellow Motown Shaker Mustang, and it was a pretty good car, but almost every race we went to had Prudhomme and that Monza there, and it became a race for second place for everyone else. No one had to say it; they just knew. Or they had another line: ‘I almost beat Prudhomme.’ That, to me, tells everything. The car looked cool AND was always a tenth better than the field. It was not my favorite of all time, but it was the best and was easily No. 1 to me. 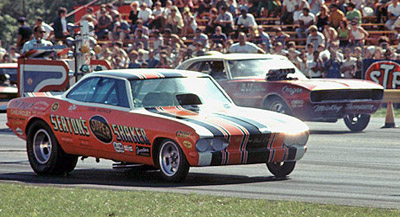 “Being originally from Detroit, the Seaton’s Shaker Corvair, Pete Seaton and Terry Hedrick, was my favorite car. They rented the back corner of Al’s shop and took me to my first Funny Car race at Detroit Dragway on a Tuesday night in 1968 and won the eight-car show. I was an eighth-grader, and it was awesome. The cool thing about this photo is that Terry was racing Dale Pulde in Charlie Wilson’s car. I used to cut through the industrial complex every day on the way home from school to see if anything interesting was at Al’s. One day, Charlie’s car is there, and I see this young guy working on it. I asked Al who the kid was, and he said, ‘Dale Pulde, and he’s the driver!’ Good stuff or what?” 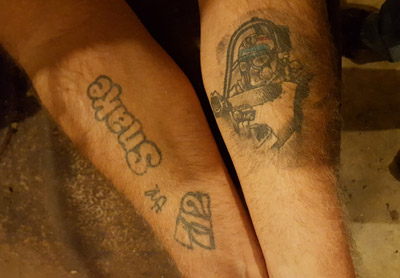 Mark "Hog Wild" Elms, a true-blue Prudhomme fan right down to his  “Snake” tattoos, had the Army Monza No. 1, voting for performance and dominance over all else. “Who ran the first six? Goldstein and the Ramchargers," he explained. "Who ran the first five? Don Prudhomme in the Army Monza. Who ran the first four? Chuck Etchells in Topeka. Too bad Etchells' car wasn't picked in the top 20. Gene Snow dominated ‘70 in the NHRA and the AHRA and was world champion in both. No young voters would know that. Ed McCulloch dominated, first with the Whipple & McCulloch Duster and ‘Cuda and then in '72 with the Revellution Dart. The Ramchargers and Chi-Town Hustler cars were awesome tickets. The Setzer Vega was another short-lived but awesome performer. I believe sincerely that the Blue Max Mustang with Richard Tharp or one of Raymond Beadle's Arrows would have been better picks over the Mustang II.

“Force, ‘Jungle Jim,’ and a pretty car named War Eagle. I never met ’Jungle’ but have met Force and Pulde. Heck, I saw Pulde fight on the starting line at the March Meet. Seen [Tom] McEwen win the March Meet. Wanna talk pretty cars? Tom Hoover's 1973 Satellite, his first Showtime car, was gorgeous. Force gained my respect when he admitted a couple years ago on the air that he changed his burnout and staging routine. He was really ticked off at himself, said that you never, ever change your routine. ‘Jungle Jim’ fans are like a cult. I am sure he was awesome, but he won a national event in '75 and in '76 won the March Meet in his Monza. So as far as I can tell, the War Eagle will be third, and then it will be between Force and ‘Jungle Jim.’ “ 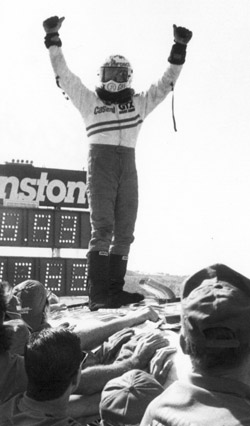 Will John Force tower above the pack? Or will Pulde or "Jungle" swing in for the win?

Al Kean, another fervent Insider contributor, had Prudhomme’s ’70 'Cuda – “such a game changer with the big-buck sponsorship,” he notes – as his No. 1, but because it didn't win (it finished sixth and seventh, in the fan and Insider vote, respectively), he now predicts a Force-Liberman-Pulde 1-2-3 finish (and I’ll get into some of his comments in future columns); another Insider regular, Robert Nielsen, who cast his lot with the Mickey Thompson ’69 Mustang and driver Danny Ongais as his No. 1 choice (which finished a disappointing 15/9 among fans/Insiders), also predicts a Force win.

“As much as I like your choice of Prudhomme, Force has dominated the Funny Car class for an extremely long period of time,” Nielsen noted. “It would have been interesting to see a Force vs. Prudhomme match race, but they came from slightly different time periods. When Prudhomme was dominating, he did a majority of the driving and car setup. Force’s biggest asset, that made him a winner, was his ability to attract deep-pocket sponsors (cubic dollars always win) and put a good race team together. I am not sure how well Force would have done without the expertise of Austin Coil, though. Force’s energetic personality makes him a clear crowd favorite wherever he goes, as do his sponsors apparently. I would be very much surprised if he was not the fan vote’s No. 1 pick.”

Are they right about Force? Or will “Jungle’s” cult-like following (Kean’s words) swing him to No. 1? Or will the War Eagle fly above them both? Guess we’ll have to wait a few more weeks to see.