Last Sunday’s reveal of Don Prudhomme’s '75 Army Monza as the No. 4 Funny Car on the Top 20 fan-vote list whittles our list down to just three entries, with the No. 3 spot scheduled to be revealed Sunday of the NHRA Toyota Nationals in Las Vegas at the end of the month, giving us ample time to scrutinize the revelations so far.

And here’s the comparison between the fan vote and the vote from the Insider Nation.

I’ll save you the list-to-list comparison (because I know you would have done it yourself) and note that the three unfilled Insider votes are the No. 1, No. 6, and No. 10 spots; in other words, only one of the fan-vote top three cracked your top three. Otherwise, there was a pretty good cross consensus of which cars belonged in the top 10.

Insider readers would rather have had the Mickey Thompson Mustang and Barry Setzer Vega in the top half of the field instead of Kenny Bernstein's "Batmobile" or Jack Beckman's Infinite Hero Dodge, but other than that, a lot of the sentiments are similar. 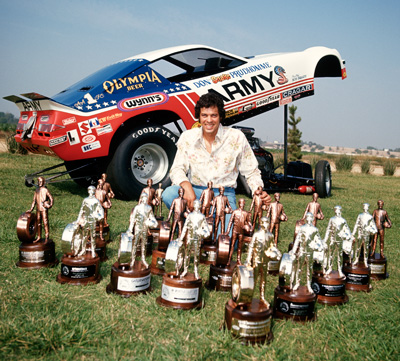 In the interest of full disclosure, the Army Monza was my No. 1 pick, so I was a bit disheartened to see it not even make the top two on either list. As a teenage pit rat, I saw this car in all of its dominating glory, and the numbers that it put up were astounding. Everyone knows the basics – 13 wins in 16 national events and two championships over the 1975-76 seasons – but those are just the headlines.

I wrote an article on the car’s dominating 1976 season for last year’s Readers Choice issue of NHRA National Dragster, and I scoured every 1976 issue to fill in all of the other nuances of its domination.

Prudhomme won the first five races of the 1976 season and reached the final round of the sixth, the U.S. Nationals, where he was upset by Gary Burgin, ending a run of 30 straight round-wins that stretched back to his victories at the final two events of 1975. Prudhomme recovered from that tough loss to again win the final two events of the season and finished with a stunning 30-1 national event win-loss record and his second of four straight championships.

He set low e.t. at all eight events in 1976, qualified No. 1 seven of eight times – Burgin stopped him from perfection there as well – had top speed of the meet six times, and reset the national e.t. record twice. Prudhomme also won three divisional events, which at the time were part of the points-scoring equation.

Yeah, that’s why he got my vote.

With a few weeks until the top-two reveal in Vegas, I’ll take a look at the top three and would most certainly love to read your input on each. What made these cars so memorable? Was it the driver? The win record? The look? Why are these three at the top of the list?

I’d also welcome any impressions of the rest of the list, either collectively or individually as it pertains to the rankings.

If you’re going to be in Las Vegas around the national event or planning to attend the SEMA Show, you for sure won’t want to miss the NHRA Breakfast there Wednesday morning, which will feature a panel discussion that includes Don Prudhomme, Tom McEwen, John Force, Del Worsham, and “Jungle Pam” Hardy. You can read more about that event here.

I’ll see you next week.