Our Top 20 Funny Cars list was released last Thursday – a day late due to some technical glitches – but my accompanying Insider column was a day early, so it all evened it. Voting began last Thursday and will continue through May 3, and I was thrilled (and quite relieved) that the 20 were well-received and that no glaring omissions were brought to my attention. All in all, I think we collectively nailed it.

Voting is racing along at a nitro-fueled pace, and I want to encourage anyone who hasn’t yet voted – especially folks like you who understand why these cars made the list – to weigh in with an informed vote to give the poll the most accurate results possible and reflect the importance of each car and not be just a popularity or social-media-influenced ballot.

On a side note, I had a couple of interesting conversations with two guys with cars on the list – Jack Beckman and Don Prudhomme – to get their thoughts about being included. I lobbed the question to Beckman in the media center last weekend in Las Vegas, where he was the low qualifier, and he was very enthused. “That was some cool stuff,” he said. “I have to tell you that I almost didn’t want to read [the list]. I mean, I’m an historian, and I would have understood if it didn’t make it because how do you get it down to 20? That’s a tough deal. And the fact there was 19 years between Force’s [1996 Firebird] making it and ours. That’s almost at the top of my drag racing list.”

I had texted “Snake” Wednesday to wish him a happy birthday (his 75th; hard to believe) and asked him about the list. Surprisingly, he hadn’t seen it, and when I told him he had three cars in the top 20, his response – good-naturedly, I assure you – was “Just three?” which led to a follow-up call yesterday to see if he agreed or disagreed with our list -- after all, he had raced against most of the cars on the list.

“Yeah, that’s a pretty cool list. I dig all those cars,” he said. “You know, the cars were so cool back in the ‘70s, with the dry hops and all that. They were a blast to drive. I mean, the driver was the computer, and you had to know your [stuff], y’know? Plus we all only had one car, not like today. I thought all of my cars were badass, and those three were really good ones for sure. I actually think the white Hot Wheels car, the one that John Buttera built, was better than that first one that [Ronnie] Scrima built because it ended up being copied by a lot of guys. It was more like a dragster, lightweight, with the headers over the framerails and the narrow chassis. It was a bad hombre; I still have that car. The [1977] Arrow won me a world championship, too; I still have that car, too. The Skoal Bandit Pontiacs were pretty tough, too, especially the one that won Indy and the Big Bud shootout that year [1989].”

I was pleasantly surprised – but not altogether shocked – that several readers took me up on my pre-list-release challenge to try to suss out the Top 20 list given some meager clues and, again, not too surprised that their accuracy level was pretty good.

Mark Elms wrote, “Last week I started a spreadsheet and typed in Buick, Mercury, Plymouth, etc., by your numbers that were involved. Then the three Prudhomme and two Bernstein floppers; hey, I am batting 1.000 at this point.

"I made a column for 'Absolutely' and a column for 'Maybe' (which by the way had very few cars in it). I aced the ‘60s and ‘70s. I didn't have the Hawaiian with Jim White as driver (so many Hawaiian floppers. I thought Mike Dunn was better, but the driver I would have chosen would have been Ron Colson, the man that drove the longest for Roland). I would have put Ashley Force in ahead of White and the Hawaiian. Now, McEwen, voted the top NHRA moment for winning the ’78 Nationals in his Corvette. Another thing about McEwen -- if you put the Snake Hot Wheels 'Cuda, you have to include his Duster; after all, he was the businessman behind hooking himself and ‘Snake’ up with Hot Wheels. But I'm not disappointed. Dale Pulde's War Eagle Trans Am was the one car I had on my 'Maybe' list. I figured ‘240 Gordie’ and his Bubble Up Trans Am would have been there on performance alone. But I'm not disappointed. The only other little blurbs between the final list and my final list was that I had ‘Jungle Jim’ in his ‘75 Vega or ‘76 Monza, but I had ‘Jungle’ in there. I also had Beadle in there, but in the ‘79 Arrow. I figured if a Blue Max was on the list, it would have been Richard Tharp. I had them all in one way or another except for the Hawaiian. Great list; now to sort them out.” 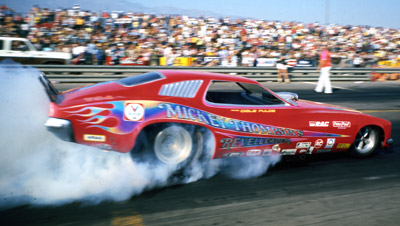 Tom “Fasthair” Scott submitted his complete list (ranked, to boot) and got off to a fine launch through the first five – at which point he interjected, “Crap; this is harder than I thought it was going to be” – then started dropping cylinders by guessing that my much-expressed affection for the Mickey Thompson Grand Am would have landed it a spot in the show, but, alas, it did not. The car certainly was a runner – witness Dale Pulde’s 6.16 national record in 1974 – but had a pretty patchy record otherwise.

Scott also had Don Schumacher’s ’73 Wonder Wagon, which was on one of my personal preliminary lists for its outside-the-box thinking but didn’t make the final cut (though it was in Lewis Bloom’s top 20), as well as Gas Ronda’s Mustang, Shirley Muldowney’s Satellite, the Candies & Hughes 'Cuda, the Sachs & Sons/Chrisman Comet, Arnie Beswick's GTO, and the L.A. Hooker.

Gary Crumine tried to guess the eight Mopars on the list and correctly picked the Chi-Town Hustler, Hawaiian, Gene Snow, Ed McCulloch, and Prudhomme/McEwen, without citing specific cars or years. He also had Dick Landy’s ’65 AWB Dodge and Mr. Norm's Charger and the Blue Max (I guess either the Arrow or the Horizon), all worthy names but not in the final field. He went for Ed Schartman over Don Nicholson but got Jack Chrisman among the Mercurys and the Blue Max as one of the Fords and “Jungle” as one of the Chevys.

Bob Fleischer thought the members of the list were "truly deserving" but had hoped to see one of the 1965 altered-wheelbase cars on it. “These cars are, as everyone knows, where the term ‘Funny Car’ came from,” he reasoned. “Technically, the class was named after them. Look at ‘Dyno Don's’ Comet: anything ‘Funny’ about it? Not really, it pretty much looks like a Comet -- no altered wheelbase, not skinnier than a standard Comet. I can't see why anyone would use the term 'Funny Car' for it. So I believe that one of the first Funny Cars, the ones responsible for naming the class, should be included, at least as a Very Honorable Mention.” 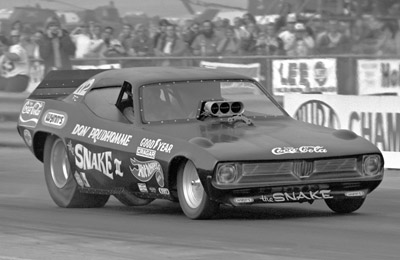 Eric Widmer really dug my description of the list as “the baddest and most influential Funny Cars of the last 50 years” but can’t see a list without the car that Prudhomme called “one badass Funny Car,” the black ’73 'Cuda, but agrees with the influence that the “Snake” and “Mongoose” Hot Wheels cars had on the world – including him.

“I remember when I was 12, 13, even 14 years old and loved Funny Cars,” he remembered. “I would talk to anyone who was willing to listen about them and always looked for ways to include Funny Cars in the conversation as I just was so influenced by the beauty and power. If those folks weren’t sure what I was talking about, I’d then ask if they’d ever heard of the ‘Mongoose’ and ‘Snake’ Funny Cars and dragsters. Much of the time, folks would answer in the affirmative. I wasn’t asking if anyone ever heard of Rambunctious or 'Dyno Don’ or Ramchargers or Ed ‘the Ace.’ It was simply 'Mongoose and Snake' or maybe ‘Big Daddy’ Don Garlits that folks seemed to be familiar with.

“There was an electrifying magic in the air when speaking about Funny Cars to those in the know and equally to those not familiar with Funny Cars. And to bring the point home, mentioning the ‘Mongoose’ and ‘Snake’ Funny Cars was just as instrumental in electrifying the magic in the air as the Funny Cars themselves. Of the 20 finalists, Don Prudhomme has three of them, KB has but two, and the rest of the group only one each. That alone makes Don Prudhomme’s cars the baddest of the bunch due to sheer quantity. I realize others have multiple cars that did not make the cut. Nevertheless, ‘Snake’ has several that did make the cut, so that speaks volumes. As far as influential, the duo of ‘Mongoose‘ and ‘Snake’ won the world over to Funny Cars. Maybe if there had been a Blue Max Mustang II and Orange Baron Monza Hot Wheels set, things could have been different.

“As for me, I wish there were a million Funny Cars as I just cannot get enough of ‘em!! And I’m grateful knowing there are tons of folks just like me who feel the same way.”

Only everyone who reads this column, Eric.