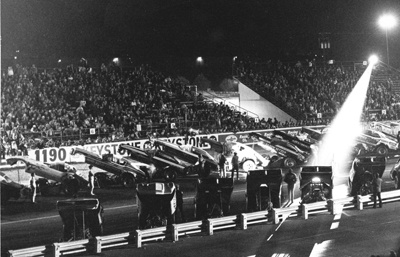 Don “the Snake” Prudhomme has three, Kenny Bernstein has two, and 15 other drivers and teams each have one. That’s the breakdown after weeks of analysis and consultation that resulted in the compilation of a list of 20 of the baddest and most influential Funny Cars of the last 50 years, part of NHRA's 50 years of Funny Car celebration taking place this season.

Fan voting to rank the 20 selected cars will begin next Wednesday, March 30, with the reveal of the list and run for six weeks. The cars will then be revealed in reverse order, once a week, on NHRA.com and Facebook. We'll of course keep track here as well and welcome your feedback and input.

The arduous task of trying to pick 20 entries from among the more than 7,500 floppers that have competed since 1966 began earlier in this column, home to some of the most knowledgeable and dedicated fans of the sport’s history. My Jan. 15 call to action led to hundreds of suggestions from readers that I distilled to about 100 finalists.

As you can imagine, the problem with asking for suggestions is that people often vote with their hearts and not their heads. I received many nominations for cars that were clearly of the sentimental variety, perhaps the first car they had ever seen or their local favorite. As much as you may have enjoyed seeing Curt Wheeler’s Sudden Impact Monza (and I did) or rooted for “the Underdog,” Ric Deschner, they don’t belong on this list (although I can think of several on which they do belong).

Once I had the field narrowed, I called on some of my best drag racing buddies, guys whose opinion on this topic I respect immensely, and guys who also were part of the panel I assembled in 2000 to help create the Top 50 Drivers list from NHRA’s first 50 years. Given that you follow this column, they’re all names that should be familiar to you: former NHRA national event announcer and drag racing historian Bob Frey; Lewis “the Stat Guy” Bloom; historian and obscure facts wunderkind Bret Kepner; former National Dragster staffer, Funny Car racer, and lifetime Funny Car fan Todd Veney; and Danny White, researcher and curator of several websites devoted to the thousands of floppers that have patrolled the world’s dragstrips.

Each was asked to submit an unranked top-20 list based on the list of finalists he was presented. The criteria were relatively simple, with historical significance, on-track success, and fan popularity being the big three.

I was not surprised that among the five, there was great but not universal consensus. With the votes of yours truly added as the sixth expert, I ran the numbers through several spreadsheets to arrive at the final 20. Conveniently enough, exactly 20 appeared on at least three of the ballots and helped decide the list rather quickly.

As evidence of the tough task at hand, 49 different cars were nominated by our experts, but only three were listed on all six ballots, and only four made it on five of the six ballots. That should provide plenty of room for armchair crew chiefs to debate the final list ("I can’t believe that Mike Faser’s Chicago Fire didn’t make the list!”).

You’ll have to wait until Wednesday to see the reveal of the list on NHRA.com, but here are some stats to mull over:

Exactly half of the cars on the list were from the 1970s, clearly one of the golden ages for the class. Four were from the 1960s, and six from 1980 to present. Five Dodges, three Fords, three Chevys, three Plymouths, three Pontiacs, two Mercurys, and one Buick make up the list. So, if you can just match the decades with the car makes, you should be able to figure out the entire list, right? (I dare you.)

Or you can just wait until Wednesday.