Thanks to everyone for voting in my little straw poll last week to get the Insider Nation’s take on the Top 20 Funny Cars list. For the most part, your voting aligned pretty closely with the overall voting – you both picked the same car as No. 1, as well as exactly nailing the Nos. 5, 12, and 18 cars – though there were some interesting discrepancies later in the list. In fact, there was one “modern” (post-1970s) car that you guys ranked 10 spots lower than the “real” vote. Interesting!

Obviously, I can’t give away too much, but – and probably not surprising given the typical topics here – you guys didn’t have a post-1970s car in your top-10 voting, which is not the case for the overall vote.

Nearly 1,500 of you chose to vote, and a good group also heeded my request for explanations, some of which can be found below.

Chuck Dewandeler: “I chose [Kenny Bernstein’s 1984 Budweiser King] car because of the corporate sponsorship swing. Obviously, ‘the Snake’ had Mattel, but it seems to me the Bud car may have opened corporate eyes to bring other monies not already in the sport to the track.” 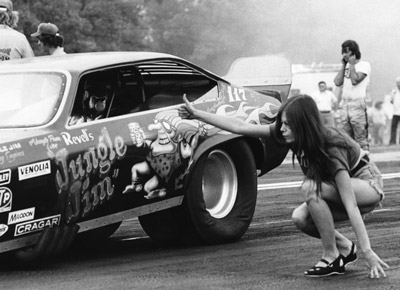 Jerry Haynes: “For me, far and away, ‘Jungle’ was the most entertaining, innovative, and interesting personification of a Funny Car racer. He seemed to understand and appreciate what fans came to the races to see. And yeah, we were ‘Jungle’ fans even before Pam came along. Almost always had a smile, even when things were going in the crapper. You simply couldn’t wait to see what was next with JJ. Pat Foster was, simply put, an all-American badass. Pat was also and most definitely one cool cat because as a kid, I cannot ever remember seeing him be rude to anyone. He seemed calm and always in control of the situation. He built beautiful cars, and then entrusted his own life in his work. He was a driver that built the race cars, so he could drive the race cars. How cool is that? I miss both these guys, but 'Jungle' had to have my vote, simply because he made me feel that he appreciated my being there.”

Mark Williams: “My vote goes to ‘the Snake’s’ ’70 ’Cuda, along with the ‘Mongoose’ Duster. Why? Every kid had one, and some of us were lucky enough to see them run in the day.”

Jeff Sayer: “I was torn between the Danny O.-driven Mustang and Ed McCulloch’s Duster but went with the Northwest hero, Ed.” 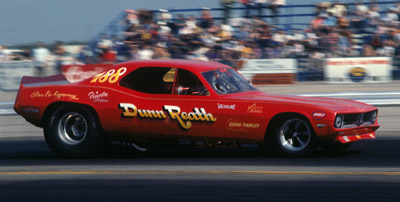 Anthony Carpinelli: “To pick one Funny Car is very difficult, but my pick is Jim Dunn's 1972 ’Cuda. I was 10 in 1970 and remember my favorite then, ‘the Snake’s’ Hot Wheels ‘Cuda. My family was a Chrysler family, so ‘Cudas were my favorite vehicle (still one of my favorites). So why the pick for Jim Dunn’s 1972 ‘Cuda over ‘the Snake’? It was rear-engined! And actually won a national event. I remember when I saw ‘Big Daddy’s’ rear-engine dragster on the cover of Hot Rod. I just assumed that all the nitro cars would follow suit, including the Funny Cars. I really thought that rear-engine Funny Cars were going to be the future.”

Chris Williams: “I voted for Jim Dunn's rear-engine ’Cuda because it was unusual, successful (relatively), and in Funny Car Summer. I remember the exact theater I saw the movie in. My ongoing love of Funny Cars started in 1971, so that movie was too cool! I think ‘Snake's’ Monza is actually most deserving, but I don't have an attachment to it like I have for Dunn's car."

Lester Ketch: “It should be a Top 100 list. I also think that No. 21 should not be a Funny Car, but the Snake vs. Mongoose Hot Wheels race set that introduced so many children (including myself) to drag racing. Not only did it introduce children to drag racing, but also mainstream advertising, and made me force ABC Wide World of Sports on my family if a drag race was on.”

Terry Spencer: “This was a very tough list to pick a winner from, especially given the historic nature of cars like Nicholson’s Comet and a few other groundbreaking cars. Having said that, I voted for Dale Pulde’s War Eagle Trans Am. This car carried no major sponsorship, but Dale kept it winning and looking beautiful and professional. Few have done so much with so little and managed to build a huge fan base along the way. All of Dale’s cars have been top-notch and true to the spirit of the class in its golden era. As an aside, my favorite War Eagle was Dale’s Buick Somerset Regal. A true original and just a completely cool-looking car.” 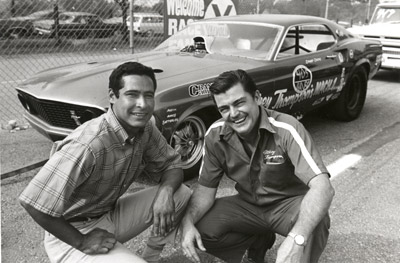 Robert Nielsen: “You chose to limit the selection of cars to those that came after the time NHRA officially recognized the class. That means the car I would have chosen, the Sachs & Sons Mercury Comet of Jack Chrisman, is not eligible, so I had to choose another car. To be quite honest, the Mickey Thompson/Danny Ongais 1969 Mach 1 Mustang is an extremely close second favorite for a great number of reasons. I have to admit a loyalty to Ford Motor Company. My first car was a 1956 Ford, and my first real race car was a 1963 Ford Falcon that I raced from 1966 to 1974. In 1969, I also had a blue 1969 Mach 1 Mustang that looked very much like the Thompson/Ongais car (sans big rear tires, zoomie headers, and blower sticking out of the hood)! I have always been a Danny Ongais fan! I believe he has to be one of the greatest race car drivers of all time. I am also a huge fan of Mickey Thompson. Thompson was an innovator. It did not matter whether it was with respect to drag racing, land speed racing, Indy car racing, or off-road racing. He left his mark wherever he raced! The 1969 Mach 1 Mustang is an excellent example of his ability to be the innovator that others would follow. His 1969 Mach 1 Mustang Funny Car incorporates a number of these innovative changes, including a new chassis design and the use of zoomie headers. It is without a doubt, hands-down the best Funny Car ever!”

So, who's going to be No. 1? You're going to have to wait until November to find out! 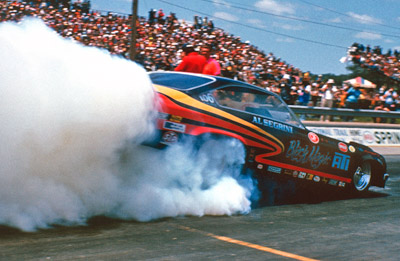 Reaching back a couple of columns to my piece on Al Segrini and the wonderful Black Magic Funny Cars, Kenny Youngblood reminisced about the car in an email to me and Lewis Bloom earlier this week.

“Back in the early days of Funny Car (the late ‘60s and ‘70s), a greater emphasis was placed on appearance; painters of the day would go to great lengths (using candy colors and intricate designs) to create rolling works of art. The Black Magic Vega would be for me the all-around best-looking graphic design I ever did,” he wrote. “In their August 1974 issue, Super Stock & Drag Illustrated [magazine] said of this car, ‘Artistically speaking, the Black Magic Funny Car is probably the finest ever created.’ (Prudhomme's Army graphics would be my other favorite, but for different reasons.) 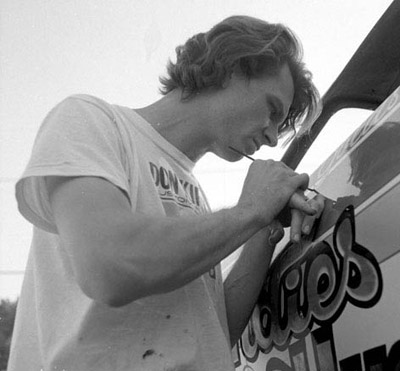 “Al Segrini contacted me to do the design. As an artist, it's most rewarding to work for clients who care as much about how their cars look as how they perform. Segrini was one of those clients; he wanted to knock everyone over when they saw it and win Best Appearing Car. The project had all the right ingredients; I couldn't wait to get my hands on it! I love working with black-based schemes (as black makes everything 'pop'); it was a cool name, and the slope-nosed Vega bodies were sleek in appearance.

"The late Tom Stratton and I worked together on the actual paint job, at Tom's shop in Pomona, with the lettering and airbrush work being applied in the garage of my home at that time, in Orange, Calif.

“Al loved the design. I could always tell how good we did on a design by how widely it would be copied (as ‘Imitation is the sincerest form of thievery’); the zig-zag Black Magic theme and colors were soon showing up everywhere you looked. Prior to this, car-magazine publishers would not put black cars on their covers; the Black Magic was on the cover of three magazines in the same month.” 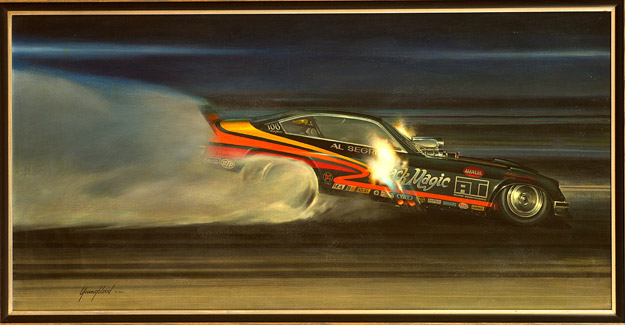 “The 24x48-inch painting, 'Magic In Motion' (depicting the car at the end of a smoky burnout), was done in 1974 and was one of the two paintings (along with one of James Warren) that I first published and offered to the mass market in 1978. The painting was purchased a few years back as a birthday gift for ATI's Jim Beattie, the car's original owner."

OK, Funny Car fans, that's it for this week. Watch for the reveal of Nos. 18-20 on our Top 20 list on Saturday's FOX show or Sunday on NHRA.com.