05 Aug 2016
Phil Burgess, National Dragster Editor
DRAGSTER Insider
By the time that most of you read this, I’ll be at Pacific Raceways covering the NHRA Mello Yello Drag Racing Series national event at the track formerly known as Seattle Int’l Raceway, which is perfect timing for this week’s subject (I love it when a plan comes together).
Canadian Insider reader Don O’Byrne recently sent me some scans from the 16-page souvenir program of the 64 Funny Cars race held 40 years ago at SIR on this very weekend in 1976, and they are so cool and timely that I thought I’d share them with you here (minus the ads). I’ve created the little gallery at right for you to thumb through. (Start by clicking on the “larger image” link so you can see them better, then use the “Next” navigation to scroll through them.)
“I paid a whole U.S. dollar for the program back then, which was not bad for a Canadian because the U.S. and Canadian were about par then (unlike now),” he wrote.
The program itself is so cool for history buffs like us. It has some interesting profiles, including of Jim Liberman (“as super hero ‘Jungle Jim’ he fights for Truth, Justice, and the American Fire Burnout”), Raymond Beadle (oddly, an old bio from when he was driving for Don Schumacher; by then he was already in the Blue Max), Gene Snow, Pisano & Matsubara, and “Gordy” Bonin. There are also mini bios of some of the drivers from the Coca-Cola Cavalcade of Stars who were part of the show, including Dick Bourgeois, Roger Lindamood, Dale Creasy, Fred Goeske, Mike Van Sant, Tripp Shumake, Dick Custy, and Al Hanna.
Also included is a nice introduction to bracket racing (with a great photo of future NHRA Division 6 Director Gene Bergstrom bracket racing his Ford Falcon) written by Northwest drag scribe legend “Flyin’ Phil” Elliott that includes one of the best Funny Car introductions since Steve Evans’ legendary “What in the hell am I doing here?” radio spot. It reads: “Imagine flying a WWII fighter, wrestling King Kong, matching IQs with Einstein, having the reflexes of a cobra snake, and holding a vial of nitroglycerin between your knees – all at once! That’s a little of what driving a Funny Car is like.”
The program also has a handy scoresheet that O’Byrne partially filled out that gives an idea of the lineup. I dug through the NHRA National Dragster archives to find our coverage of the event and to check out the competitors.
While favorites Don Prudhomme and Tom McEwen were back East on the national event trail, the lineup was still a solid one: Beadle and the Blue Max, “Jungle Jim,” Ed McCulloch, Jim Dunn, Lil John Lombardo, Snow, John Collins in McEwen’s No. 2 Duster, Russell Long and the Chi-Town Hustler, Frank Hall in Jerry Ruth’s car, Twig Ziegler, Kenney Goodell, Mike Miller, Gary Densham, Gary Southern in John Lindsay’s Impulse, Jeff Courtie, Chris Lane, “Nitro Nick” Harmon, Dave Uyehara, Terry Capp, Rich Rogers, and the Coke Cavalcade machines of Lindamood, Hanna, Van Sant, Bourgeois, Shumake, Custy, Creasy, Larry Palmer, and Rick Johnson in Bill Schifsky’s Bear Town Shaker.
And, oh yeah, some guy named John Force. 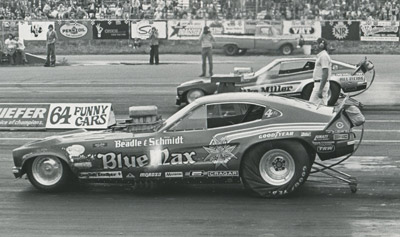 Beadle won the event (which actually ran Sunday, Aug. 8, after a Saturday rainout), posting low e.t. of every round (and the meet, 6.31) and beating program cover subject Miller and his Boredom Zero entry in an all-Mustang II final round. Custy won the Coke Cavalcade final over Shumake, who crossed the centerline in Dennis Fowler’s pretty Sundance Monza.
You can do math as well as I can, so (as was almost always the case) the 64 Funny Cars were not all nitro burners. Brad Anderson won the Alcohol Funny Car (then known as BB/FC) portion of the show, defeating SoCal neighbor Lou Gasparrelli in the final. Other competitors included future nitro pilots Tom Ridings, Sherm Gunn, and Ray Romund, plus Dale Van Gundy, Doug Moody, Kenny Randolph, Larry Garcia, Chris Christensen, Richard Day, John Gazso, Tom Lemons, and Joe Amato (“Wiskey Joe,” not future Top Fuel Joe). A Northwest contingent of BB/FCs ran a separate eliminator, with the win going to Rob Bruins (taking a week off from driving Herm Petersen’s Top Fueler) over Barry Price.

O'Byrne also forwarded me (with permission) a set of photos from Bob Jackson that appear on the All Northwest Drag Racing Facebook page and chronicle the 1976 race. Here are a few choice ones.

The Chi-Town Hustler, doing its thing, as Austin Coil looked on

Some guy who nicknamed himself "Brute Force"

Dave Uyehara and the Oswald & Uyehara Kamikaze Mustang vs. Terry Capp and the Wheeler Dealer Vega

The issue of ND that had the report of the 1976 64 Funny Cars show also had coverage of the 32-car show that SIR owner Bill Doner confirmed via email that he also staged the week before at northern Oregon’s Portland Int’l Raceway, making for a mini Western Swing for a lot of the drivers who competed at both.
Liberman, who wowed the fans with a fire burnout before laying down low e.t. of the meet at 6.28, won the Portland nitro show on a solo when Bonin couldn’t make the final-round call due to breakage (which may also explain why he was not mentioned in the Seattle coverage). Goeske also was supposed to appear in Seattle but crashed and burned his Vega in round one of the Coke Cavalcade race, which eventually was won by Creasy over Van Sant. Anderson scored the BB/FC title over Lemons. 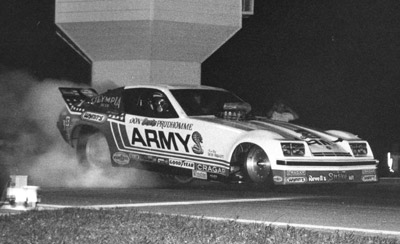 Don Prudhomme won a series of July match races with the Army Monza, including this one at Quaker City Dragway (Leo Taugher photo) 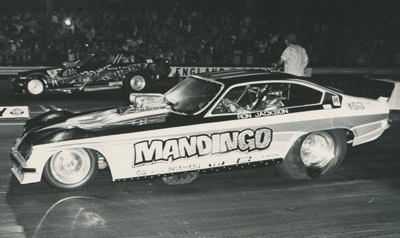 As evidence of the amount of quality match racing going on at the time, the issue also included Lebanon Valley Dragway’s Northeast Funny Car Nationals (won by Prudhomme, who had low e.t. of all three rounds of the Chicago-style eliminator, including a 6.49 in the final to beat Harland Thompson and the Fireball Vega); York U.S. 30’s Super Stock Nationals (won by Prudhomme over a stout 16-car field that included McEwen, Liberman, Ivo, Bob Pickett in Mickey Thompson’s Grand Am, Tom Prock, Bruce Larson, and Gary Burgin); Quaker City Dragway results (another Prudhomme win, over a four-car field of McEwen, Pickett, and Stan Bowman and the Flying Dutchman Vega); Sacramento Raceway’s Fox Hunt (won by Dave Condit and the L.A. Hooker over “Jungle Jim” in a best of three); as well as unnamed races from U.S. 131 Dragway (Tommy Ivo beat  Larry Arnold in Roland Leong’s Hawaiian in a Funny Car field that included Prudhomme, Beadle, “Wild Willie” Borsch, and others, and Jeb Allen shut down Gary Beck, Dick LaHaie, and Shirley Muldowney in a star-studded Top Fuel show), New England Dragway (Ron Jackson and the Mandingo Vega got into the final via the break rule and beat Prock for the title); and Bonneville Raceway (Dan Richins wheeled the Iron Horse Top Fueler to a final-round victory over Paul Schoenfeld’s Wild Bird entry). 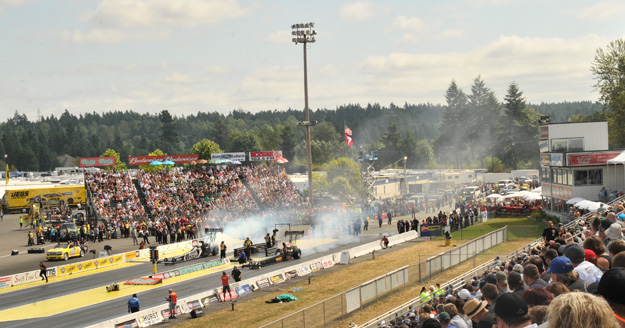 One final Seattle note from O'Byrne that I had never considered. If you've ever been to the track, you know that there no light poles are mounted on either side downtrack. So how did they hold these amazing until-1-in-the-morning 64 Funny Car shows? According to O'Byrne, and confirmed by Doner, all the light that the track needed emanated from one single source, the high-mounted bank of lights behind the starting line. According to the story, the lighting was designed by Boeing engineers to cast enough light all the way to the end of the track.

Now that's an illuminating thought. See ya next week.