The history of the Funny Car class that we’re celebrating this year suffered a significant loss earlier this week with the passing of Jess Tyree, one of the drivers who was in on the ground floor of the class in 1966. Tyree died Monday of cancer. He was 80.

Where Dickie Harrell was “Mr. Chevrolet,” Tyree became a West Coast favorite as “Mr. Pontiac” with a long-running career in Pontiacs that began in Super Stock. He advanced to Factory Experimental and finally to Funny Car, where he competed until 1973. Although he was a West Coast product, Tyree came to national attention as part of the traveling Coca-Cola Cavalcade of Stars.

Tyree was born in Oklahoma – he and fellow Funny Car pioneer and traveling partner Jack Chrisman both hailed from Grove, Okla. (funny story later on that) – and moved to California in the mid-1940s. He fell in with the fast crowd, racing through the then-wide-open expanses of Southern California’s Orange County, where he first met Mickey Thompson, with whom he would become lifelong friends.

Before long, Tyree had gone legit, racing at the famed Airport Drags events in Santa Ana, Calif., in 1950, where he ran Chevys and Plymouths, but it wasn’t until late in the decade that he had his first Pontiac, a ’57 Chieftan Super Stocker, after impressing a Texas-based Wickenburg Pontiac team that sent him down the Pontiac path.

Tyree’s Chieftan ran well enough to get the attention of the factory, and he soon found himself on the Pontiac team along with its biggest star, Thompson, in whose ’62 Pontiac Catalina he won S/S class honors at the 1962 Winternationals and at that year’s Bakersfield March Meet as well as set a land-speed record for its class that year at Bonneville.

Pontiac Racing Director John DeLorean – yes, the same guy who later invented the gullwing sports car that bears his name and went “Back to the Future” – commissioned a Tempest for Tyree in 1963 through Santa Ana Pontiac dealer Bill Barry, and Tyree moved into the FX classes. Tyree also continued to run in the stocker classes with an A/S ’62 Catalina with which he set multiple NHRA records and collected several class wins. 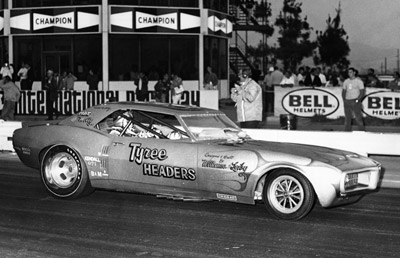 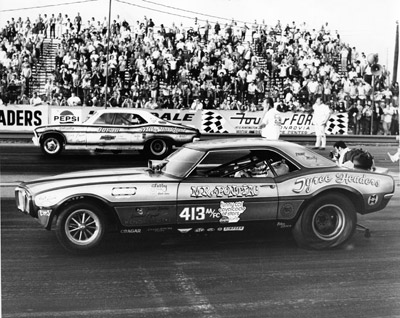 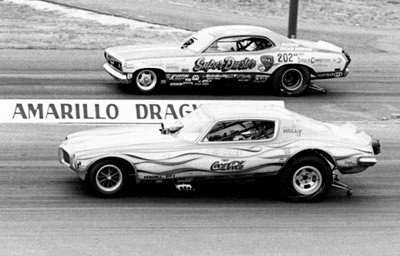 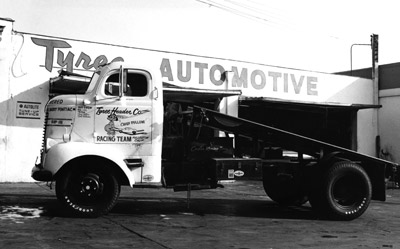 Since the early 1990s, Jess Tyree had raced his former ’63 B/FX Tempest on the nostalgia circuit.

When the Funny Car craze began in late 1965/early 1966, Tyree was all-in and stayed true to his Pontiac allegiance with an all-fiberglass Pontiac Firebird. That car was destroyed in November 1967, when it went airborne at the finish line at more than 170 mph at Tucson Dragway after a massive blower explosion.

Tyree suffered some burns and minor injuries in the crash but rebuilt for the 1968 season with another Firebird and became a regular on the Coca-Cola Cavalcade of Funny Car Stars tour the following year and barnstormed the country with the series until 1972, his final year behind the wheel. Tyree hired David Ray for the 1973 season, then retired from racing at the end of the year.

As noted earlier, Tyree and Chrisman were from the same Oklahoma hometown, but even though they knew of their shared Oklahoma roots, they didn’t know just how close they were. In a 1997 interview with National Dragster, Tyree said that when the tour hit the central states, the two would separate and head for their families, not knowing they were headed to the same destination.

“I used to tell Jack I was going to see my father-in-law, and he would go see his sister,” said Tyree. “We both went to Grove, a town of maybe 3,000 people, and never once saw each other despite the fact that our two towing rigs would stand out in such a small town. In fact, I didn’t even know he went [to Grove] until the year he died. Our relatives lived less than a couple of miles apart, but I never ran into him.”

In addition to cars that he branded with “Mr. Pontiac,” Tyree’s cars flew the name of his business, Tyree Headers, which he started in the late 1950s and whose customers ranged from local bracket racers to superstar teams such as the Farkonas, Coil & Minick Chi-Town Hustler. Even though Tyree sold the business to his good friend Thompson in 1969, he and a small team continued to make heads for Pontiac racers and friends, including, most recently, Dale Armstrong and Don Prudhomme for some of their street cars.

Although he stayed involved with cars as a service manager at local dealerships, Tyree was on the drag racing sidelines for almost 20 years until his old B/FX Tempest resurfaced and he was given the chance to buy it in 1989. The car was pretty beat up and needed a new roof and quarterpanels but was race-ready within a few years, and Tyree began competing with it at nostalgia events and match races, running off an 8.60 index in the ANRA’s B/Gas category and claiming championships in 2005 and 2006. The really cool part is that Tyree brought his original crew -- Mike Leiby, Ted Beck, and Dale Williams – back to work on the car. 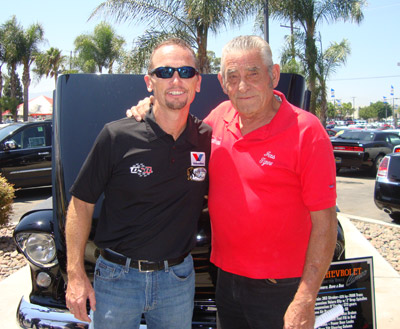 NHRA Funny Car champ “Fast Jack” Beckman, whose love of our sport’s history is well-known, got to know Tyree throughout the years, meeting him during autograph signings and at the NHRA Museum, and he gained a deep affection for the man, a bond that deepened and strengthened after Tyree was diagnosed with cancer. Beckman is a cancer survivor.

“I appreciate all of the pioneers of our sport, but Jess stood out in that he was still competitive and racing today,” said Beckman, who was fresh off a stout 3.89 testing run in Phoenix Thursday when we spoke. “He contacted me when he got diagnosed with cancer, and I saw him last at the [California] Hot Rod Reunion last year. He was 80 years old and worn down by chemo but loved driving so much that he still wanted to drive his race car. That’s how badass he was.

“I loved to talk to him about his days on the Coke Cavalcade and what it was like to run so many dates as a booked-in car. Today, when we run a race, it's three days, and we’re guaranteed to get at least four qualifying runs to get paid. Back then, they also had to put on a show; it was not so much about winning but about putting on a show for the fans. If you put on a good show, your booking value stayed high; you had job security for putting on a good show, so the drivers who were going to run one another would talk to each other about what kind of burnout they were going to do, how many drop hops they were going to do, all in the name of the show. It was such a different climate, and an era I wish I could have participated in. Jess was such a neat dude, smart, and, as I’ve found to be the case with many of these icons of the sport, a real human being beneath the firesuit.” 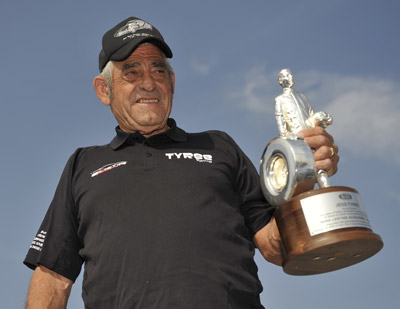 Tyree was the grand marshal of the 2009 California Hot Rod Reunion.

I also got to spend some time on the phone with Tyree’s youngest son, Bart, who was just 7 when his dad stopped running Funny Cars and who lived with him the last seven years and was part of his nostalgia efforts the last three decades; he revels in the fact that his dad was so well-remembered and recognized.

“Dad would always talk to us kids about cars because we all had parts and cars to work on, and naturally, we bragged about him to all of our high school friends,” he said. “When he worked at the dealerships, he had mementos from his career hanging on the wall of his office, and even though he was a real humble man, he was proud that people would make models of his cars or that Slixx would make decals for them.

“He was very humbled when people would come up to him at the Hot Rod Reunions and share their memories with him. We had some guys from Australia last year who knew about him. They were so excited to see he was still running, and when they found out he had cancer, they were amazed he could still do what he was doing. I tried to tell him that he should take it easy, and he told me, ‘Just let me get into the car and do my thing.’ He only knew one way to race, and that was wide-open. I was talking to Hayden Proffitt the other day about how he and my dad were the last two from the original Santa Ana group from the 1950s, how he and my dad and Mickey raised hell all across the United States.

”Before he died, he told me he wanted me to carry on for him and drive his car, but I’m not sure I could do him any justice. There’s no way to replace him.”