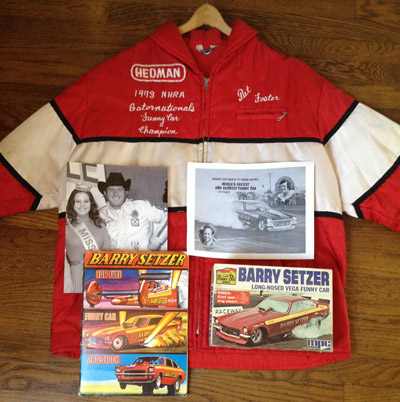 “Finally, a full load of the Setzer/Foster/Buttera/Pink Vega straight into my veins!” enthused Insider reader Paul Nadeau after last week’s column in which we, the drag racing fandom, finally heard Barry Setzer share his memories of his two years as owner of the Pat Foster-driven Vega Funny Car that is indelibly engraved in the memories of many of us who saw it run.
As I said last week, it was a story too long in the coming, and I was happy and proud to play my part in bringing his story back into the limelight, and Cole Foster, Pat’s son, the final link in the effort to track him down, was more than happy to keep the conversation going, sharing a ton of personal images and memories.
Especially interesting to me were his insights into two of his dad’s more memorable national event losses. 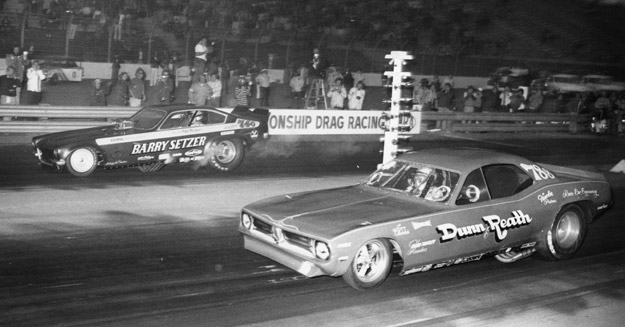 Foster’s loss to Jim Dunn in the final round of the 1972 Supernationals -- the one that made Dunn’s Barracuda the first (and, as we know, only) rear-engine Funny Car to win a national event – has been a mystery to me for years. Why would Foster, usually rock-steady behind the wheel and with the better and more consistent car by a mile (6.29, 6.30, and 6.31 to Dunn’s patchy 6.60, 6.77, and 6.44) red-light to Dunn in the final?
According to Cole, “The idle accidentally got set really high in the final round; Dad said it was using clutch and getting hot. He bent the brake lever pulling on it trying to keep the car from creeping in the staging lights. He had the field covered that year and Dunn was tenths slower, but the car moved out of the beams and caught a red-light and gave Dunn the famous national event win. Ironically, Dad built Dunn’s car at Woody Gilmore’s.”
(Man, I live for this kind of minutiae to fill in the cracks between the details of the facts we already know.)
The team would win its first national event early the next year at the Gatornationals but probably would have won it in 1972 had the car not caught fire on the starting line in the semifinals against Winternationals champ Ed McCulloch. Foster, the No. 1 qualifier, was hot off a class-best 6.52 in a round-two drubbing of Don Schumacher and by all accounts had the car ready to run the class’ first 6.4-second pass against “the Ace.” 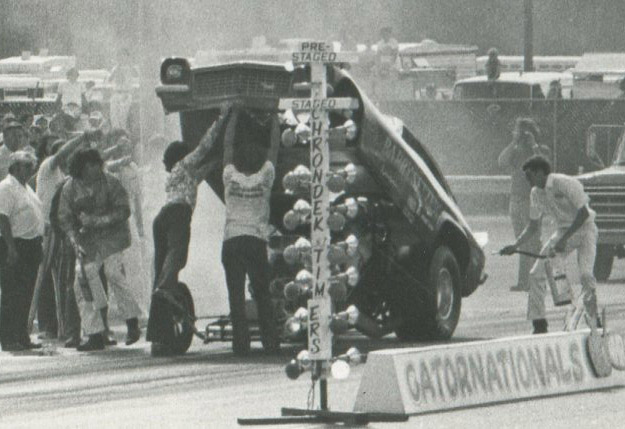 Depending on to whom you talk, either the crew had wrapped rags around the valve-cover-mounted breathers (not an uncommon tactic) or a rag was accidentally left in the body tin beside the blower hat, but a fire started, and flames began licking out through the injector hole. Foster refused to shut off the car until Chief Starter Buster Couch insisted (ahem) with a little Mr. Spock-like Vulcan nerve grip. (Oh, how I miss Buster.)

Chief Starter Buster Couch, right, moved in for the "kill" in this photo from the June 1972 issue of Car Craft.

“They lifted the body and grabbed a rag and put out a tiny fire,” said Cole. “The body went down, and Dad moves in to stage it, and the little fire lights back up. Dad knows what’s burning and knows it will go out in 20 feet. Buster tells him to shut it off; he won’t and moves in to stage. Dad said he was tunneled in and nothing mattered except running for the win. Buster reached into the window with the car running and grabbed Dad ‘Spock’-style between the neck and shoulder. Dad said it was unreal how strong Buster grabbed him, so he shut it off, and ‘Ace’ made a single for the win. Those were the type of small things that kept that car from winning more national events.” 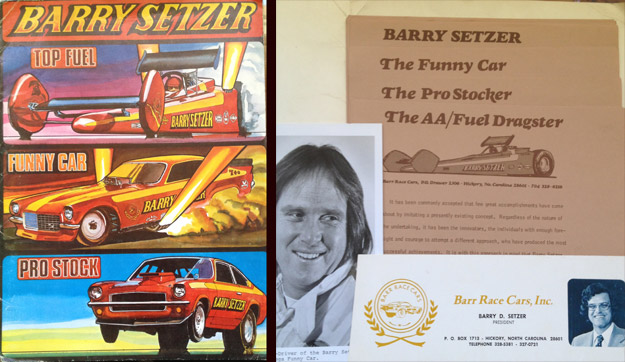 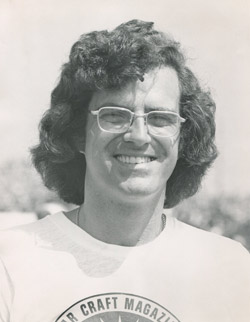 “Desires for racing program: To have each of the three Barr Race Cars recognized as the best appearing, best prepared, and best performing machines in drag racing.”
“Immediate goals in 1973 are to win everything.”
The material also cited that the Barr Group (the holding company for his many businesses) expected projected sales of $40 million in 1973 but went on to clarify, "In spite of appearances, my racing program has not been handled with an open checkbook. We are taking a very businesslike approach to drag racing and feel our programs are built on very sound financial advice.”
Setzer, who, according to his bio, had in his youth served as a deckhand on Ohio River barges for the Ashland Oil Co. (Pennzoil), described himself thusly: “I classify myself as an entrepreneur. My strong point is creating ideas and then turning them over to an experienced staff.”
Cole has also promised to share in the (very near, I hope) future what it was like growing up the son of a Funny Car hero -- summers spent on the road with his dad, sacking out in the sleeper between match race dates, hanging out with Don Prudhomme and Bob Brandt at the Ed Pink garages, and nightly guests such as Raymond Beadle, Jim Liberman, and Billy Meyer around the Foster family dinner table. I can’t wait.

Last weekend’s unveiling of the aforementioned Dunn & Reath rear-engine Barracuda as the No. 11 car in the Top 20 Funny Cars fan poll means we’re halfway done and ready for the top 10.
Here’s what has been revealed so far with a quick recap of the fan vs. Insider vote.

The biggest disparities between the fan and Insider votes are the six-spot difference of opinion on the Thompson Mustang and five-spot disparity on the Setzer car, both of which I “blame” on the lack of current mainstream knowledge about both.
So, what that all means is here's a look at who’s still in the hunt (no spoilers; presented in chronological order):
Don Nicholson Comet (1966)
Chi-Town Hustler (1969)
Don Prudhomme Hot Wheels 'Cuda (1970)
“Jungle Jim” Liberman Vega (1973)
Don Prudhomme Army Monza (1975)
Raymond Beadle Blue Max Mustang II (1975)
Dale Pulde War Eagle Trans Am (1977)
Kenny Bernstein’s “Batmobile” Buick (1987)
John Force Castrol Firebird (1995)
Jack Beckman’s Infinite Hero (2015)
It’s an interesting mix with five decades represented (2000s! What happened to you?), which is perfect and probably represents a good cross section of Funny Car fans. As you can see, the Insider Nation and the fan poll agree on eight of the top 10 (I had only six of those in my personal top 10, the other four being the Setzer Vega, the Thompson Mustang, Prudhomme’s Pepsi Challenger Trans Am, and Bernstein’s Tempo).
Tony Pedregon, in his role as NHRA FOX analyst, also has been offering his personal Top 20 list, though his criteria seem to be more personal than analytical, which makes for a cool juxtaposition with the other voting. Here are his picks so far, which, like for many of us, are very 1970s-centric:
11. "TV Tommy" Ivo Nationwise Dodge (1976)
12. Bruce Larson USA-1 Camaro (1969)
13. Roland Leong/Ron Colson Hawaiian Monza (1977)
14. Joe Pisano/Tom Ridings Arrow (1978)
15. Dale Pulde War Eagle Trans Am (1977)
16. Jim Green/Richard Rogers Green Elephant Vega (1977)
17. Gordie Bonin's Bubble Up Trans Am (1977)
18. Al Segrini's Black Magic Vega (1974-75)
19. Dale Armstrong/Mike Kase Speed Racer Omni (1980-81)
20. Tom Prock’s Detroit Tiger Monza (1975-76)
So we plunge into the top 10 beginning this weekend. The reveal for No. 10 will take place during Saturday night’s FS1 program. If you miss it or don’t have FS1, I’ll post it on NHRA.com Sunday morning.
Thanks for reading and contributing. I’ll see you next Friday.