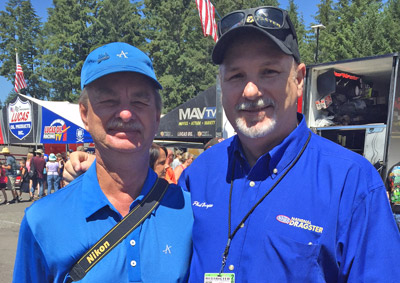 I’m back from an incredible weekend in Seattle, where, appropriately, after last week’s column about the track’s legendary 64 Funny Cars events, the floppers were the star of the show with nine of the quickest times in history, national record-setting passes, the first side-by-side 3.8-second eliminations round (two of them!), and more made it paradise for loves of the fuel coupes.

While cruising the pits there, I was able to connect with a pair of names familiar to longtime Insider readers, my “nemesis” Robert Nielsen, who has contributed to widely and expertly to this column over the last nine years with his expertise of early Southern California racing (he has lived in the Great Northwest the last 10 years but still has treasured memories of Lions and the other great SoCal tracks) and with Don O’Byrne, who last week shared his copy of the souvenir program and some of his buddy’s photos from the 1976 64 Funny Cars race, which got the whole discussion started. 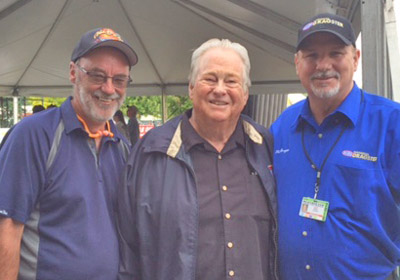 I had some great bench racing moments with both, recounting our shared experiences, and even roped my old pal Bill Doner, the legendary race promoter who made 64 Funny Cars in Seattle a true happening, into posing with me and Don.

I got a great email from another great friend of the Insider, 1970s Funny Car racer Jeff Courtie, with some brief remembrances of his time at the 64 Funny Cars shows, which prompted me to call him and get him to expand on them to help paint a better picture of the scene, and he even shared with me some of his great old photos.

Courtie, who raced up and down the West Coast from 1971 through 1978, was the perfect guy to reflect on this period. He was neither a star nor a leaker, just your average guy who, as was possible back then, could afford to race a Funny Car and did so, getting the opportunity to run side by side with the legends of our sport and creating a lifetime of memories.

This great pic from Courtie's scrapbook was given to him by photographer Philip Howard and shows fans atop the long-gone staging lane bridge. As Courtie pointed out, they've removed some of the signage for a better view.

“I had to work for a living — at one time I was working at Ed Pink’s doing blowers for $4.25 an hour — and still living with my mom and dad so I could race,” he recalled. “I’d get off work Thursday night and drive straight through to Seattle,” he said. “It would usually take about 24 hours to get there — some of the ‘big’ guys made it quicker because they had bigger gas tanks and didn’t have to stop as often for gas — and then we’d crash out for the night.”

Courtie and his fellow Funny Car gypsies would stay at the SeaTac Inn, which was the Great Northwest’s answer to SoCal’s Marco Polo motel, filling the parking lot with all manner of ramp trucks and trailers. 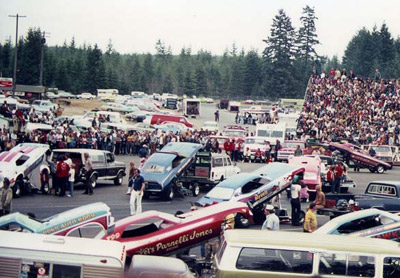 “We’d head to the track Saturday morning, and there’d always be a long line of trailers waiting to get in down that two-lane road to the track,” he recalled. “There’d just be this long line of ramp trucks, [pull-along] trailers, and [fifth-wheel] Chaparrals, plus all of the fans trying to get in; it could take you an hour just to get in. The 64 Funny Cars race was like Woodstock to the fans up there; they weren’t spoiled like we were in Southern California with a race every weekend at three or four different tracks. Doner and [Steve] Evans would advertise non-stop for like two weeks before the event.

“The fans were just crazed. They sold beer there from first thing in the morning, and you never knew what they’d do. We’d have to stop the races because they’d be sitting on the guardrail in the lights with their legs hanging over, drinking beer. If you lost, the fans would throw beer bottles at you when you came back down the return road.”

I asked Courtie about the lighting situation I wrote about last week, with just the one light pole mounted behind the starting line. 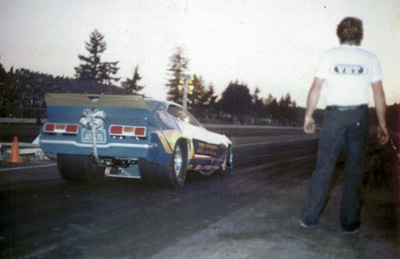 “The lighting was a little skimpy,” he agreed. “When you’d get to the shutdown area, it was like running at Irwindale — pitch black — and they’d have a 25-watt light bulb at each turnout. and invariably the last one would be burned out. You’d get down there and no one, including your crew, could find you. But that was only usually your last run. It stays dark until almost 9 o’clock there that time of year, so we’d run about 7 and then again at maybe 10:30 or 11, and they’d run the final after midnight.

“The biggest issue was always the weather; seems like it was always damp, whether it was raining, misting, or just humid. We’d have to get packing blankets and throw them over the windshield until we ran.”

Courtie, who raced the 64 Funny Cars meet from 1973-78, also was able some years to run both the Seattle event and the 32-car race Doner hosted at Portland Int’l Raceway the weekend before. There, the local hotel was the Thunderbird Inn, right on the Columbia River that separates Oregon from Washington. 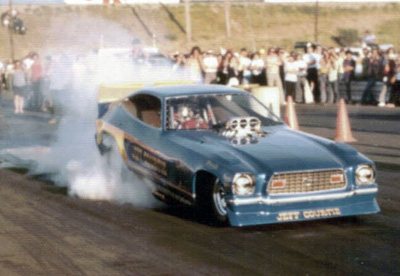 “Doner was really good to the racers,” recalled Courtie. “He’d get some guys like me to run the two races, and he paid well. In 1974, I got $800 from him to run in Portland and $800 to run in Seattle, which doesn’t sound like much, but it was good money for a guy like me back then. Some of the bigger guys would run a whole northern circuit for him — Portland, Seattle, Bremerton, and up into Canada — before everyone headed to Indy.”

I asked Courtie if Doner or other track managers offered extra incentives for longer, smokier burnouts, and he practically scoffed at the notion.

“Hell, no; they didn’t have to. We all loved doing them,” he said. The long burnouts, the fast backups, the dry hops, we were always just trying to outdo one another because we loved doing them. It was just standard operating procedure for everyone.”

To read more about Courtie’s history, check out this column I wrote about him way back in 2008: Jeff Courtie: A pair of pretty sound careers.

Reader Steve Ojard had been to his fair share of Seattle events and shared his laundry list of memories.

“Bill Doner's beloved radio spots on KJR-AM ("You tell 'em, Jungle Jim!" …. "Drag Racing is faaaaar out!"), urging fans to come out to the drags on Seafair weekend because, to paraphrase, ‘who wants to go watch a bunch of slow, sputtering boats anyway?’ (a reference to the hydroplane races on Lake Washington). To this day, I say AMEN to that!

“Lights out at the track around 10 p.m., not because of closing time but for drama, as ‘Jungle’ fires up in the dark behind the spectator lane side pits, rumbles out from behind the angled grandstands, turns onto the right lane at the starting line as the lights come on, and rips a burnout the full length of the track. The place went berserk!

“After dark, calls from the announcer for people to ‘back away from the edges downtrack so the cars can run or we'll have to shut ‘em down.’ Those ballpark lights you wrote about were the only lights on the track but still not all that bright I'd imagine when they're behind you, looking out the windshield of a flying flopper while trying to stay in the groove at 1,000 feet.

“Going out of my parents’ house one morning — we lived in a residential neighborhood in West Olympia, 50 miles from SIR — and seeing [Roger] Lindamood's Color Me Gone on an open trailer about 10 feet from our driveway, just across the street from me, a rabid, magazine-devouring teenage drag nut? It was like Christmas! Seems to me it was there at least a day. I believe our neighbor lady in that rental house was an ‘acquaintance’ of his.

“That gorgeous ’76 L.A. Dart pictured in your article, squaring off with Richard Schroeder's Bad Bossa Nova. Before they ran, a test of nerves first: ‘Wild Bill’ wheelies downtrack, bounces, and slides sideways to a stop, then wheelies back to the starting line to thundering applause. So then, not to be outdone, Schroeder follows up with the longest, smokiest, in-place burnout I have ever seen in my life that didn't destroy the slicks in the process. You couldn't see the tower when he was done; it was covered. After that, they raced, and I don't remember who won. Sensory overload, the house was rockin'!

“Jerry Ruth and another driver (or a crewmember, I'm not sure) standing aside the tower lane grandstands, suddenly taking off on foot after some moron who ran out onto the track to grab a chunk of blower case that had just departed its engine. (Straps, what straps?)

“Those were the days, my friend. Magical! We'll never see the like again.”