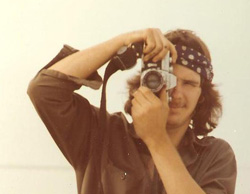 Ask someone if they want to see your old family photos, and they’ll probably come up with an excuse to go do something less painful; root canal comes to mind. But ask any drag racing fan if he or she would like to look at your old drag racing photos, and you’re likely to find a ready and willing audience.

This thought comes to mind after discovering a treasure trove of my own old photos that I took as a teenage fan in the mid- to late 1970s. I had been assigned the unglamorous task of cleaning out the cabinets below the china hutch, and between admonitions to “Be careful not to shake it!” and “Be careful with those plates!” I found a trio of old photo albums – you know the kind, with the clear plastic sheets and the sticky pages.

Being a SoCal kid, naturally they were all from Pomona, Orange County, or Irwindale, and they brought back fond memories. I had shared some of them in late 2007 in this column but had apparently filed them away after that. Not the greatest of photos, but hey, I was just a teenager with a crappy Ricoh camera. Some kids take out their first personal loan to buy a car; mine was for a camera. 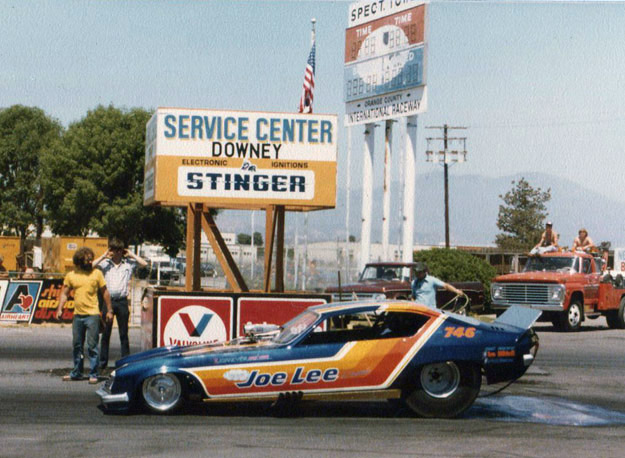 The aforementioned starting-line scoreboards in the background said "Spect" on half and "Tower" on the other (expertly cropped out by me), to designate either the spectator or tower lane. The first time I went there, I read that as one word, thinking, "Oh look; it's the Spectator Tower." OK, so I was 11 at the time. That's local favorite "Smoky Joe" Lee rolling through the burnout box to show how he got that nickname. The little structure next to him contained the barrel of water for teams to scoop from and pour beneath the rear tires. At the Last Drag Race, starter Larry Sutton backed two jet dragsters up to it at an angle to try to burn/blow it down, much to the displeasure of track owner Charlie Allen. 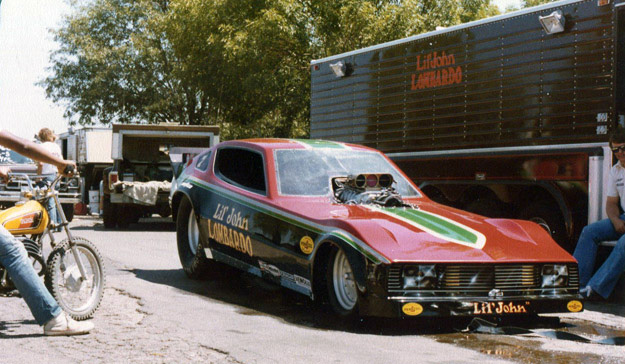 This seemingly innocent photo of Lil' John Lombardo's car parked in the pits resonates with me for two reasons: First and foremost, it shows just how easy it was to get an up-close and unblocked view of the cars in the pits back then. Truly another world from today. Second, anyone who spent any time in the OCIR pits remembers those trees in the background that dotted the pits and gave it a nice touch as more than a parking lot. Notice also how I deftly sliced Lombardo crewman Randy Scoville -- who would go on to become a rep for Champion Spark Plugs -- in two as he sat in the trailer door. Good work, ace.

And, of course, there were autographs to be had as "the Snake" obliged this young fan after his OCIR victory. I wonder if this kid is an Insider reader. Or if he still has the autograph.

Of course, today the kid would be asking for a selfie, the death of the autograph. 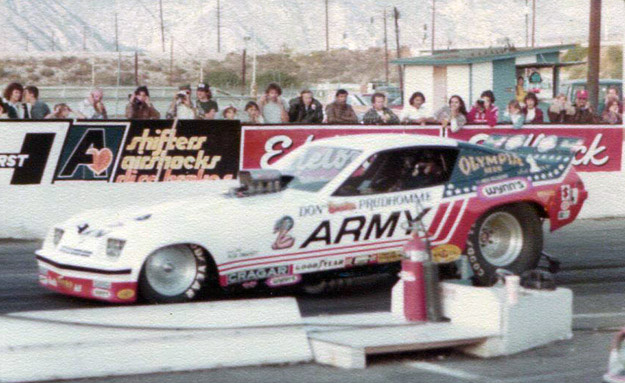 The 1976 Manufacturers race did not end up being the Monza's swan song; Prudhomme's new Arrow was not ready for the New Year's Day Nitro Bowl at Irwindale Raceway, where somehow I and my buddy Van Tune were able to get out onto the starting line with homemade but apparently authentic-looking photo passes (they had the word PHOTOGRAPHER on them in big letters ... too funny); don't try this at home, kids.

I learned later that National Dragster's own Leslie Lovett was there covering the event for the paper. Odd to think that we may have stood side by side -- him probably looking askance at my "credential" -- neither of us knowing that about five years later, we'd be working together and that he'd be showing me how to be a real PHOTOGRAPHER. 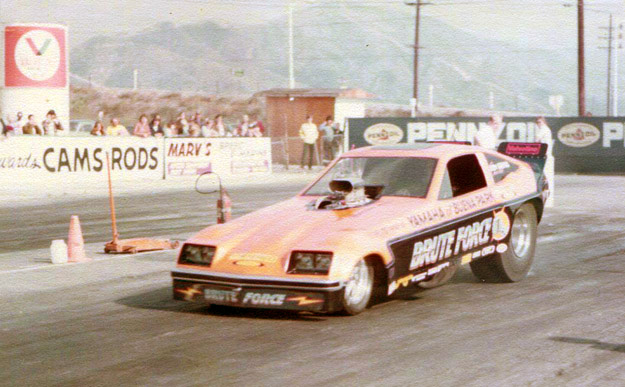 I had virtually no idea who John Force was and certainly no idea of who he would become when I snapped this stunningly average pic of his Brute Force Monza. 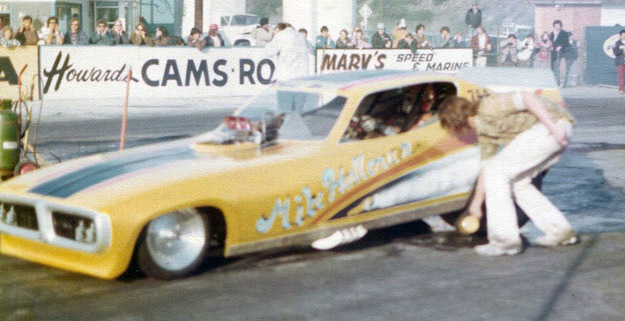 Sure, you can tell me that this photo of one of my favorites of that era, "Big Mike" Halloran, is out of focus, but I will quickly refer you to the Howards Cams lettering on the far guardwall. Photography just doesn't get any more crisp than that, folks. 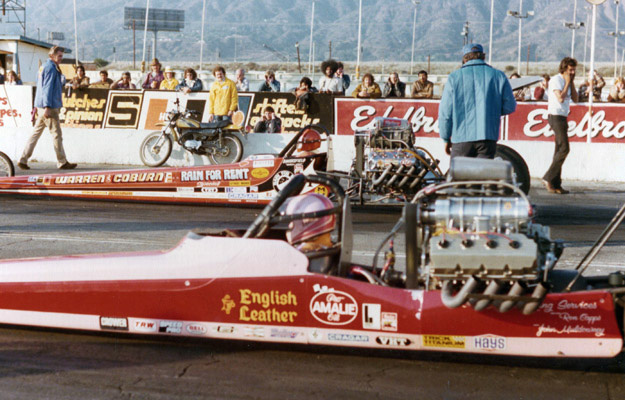 At that same New Year's Day race at the 'Dale, Shirley Muldowney came to town to take on our local hero, James Warren. She terrorized the Ridge Route Terrors by winning three straight in their match race and stole Warren's track speed record to boot with a blast of 243 mph. 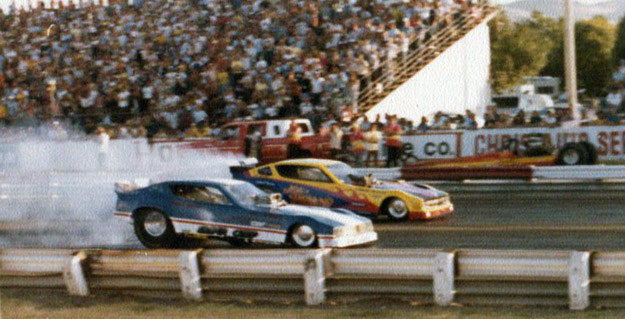 It's a pedalfest! Henry Harrison, near lane, dueled at OCIR with Tom Ridings in Joe Pisano's entry in this battle of Arrows. Harrison was driving the Amos Satterlee-tuned Super Chief, which, according to FC expert Danny White, was no longer owned by Nelson Carter. Harrison and "Famous Amos" were a familiar pairing in the 1970s, working together on cars such as the Vulture Funny Car and the Sheep Herder fuel altered.

OK, so that's clearly John Force and the Wendy's Corvette in the far lane, but why the heck is he paired with the late, great Lou Gasparrelli and his Trans Am Top Alcohol Funny Car? For the record, I'm pretty sure that I snapped this photo as they were backing up from their burnouts. 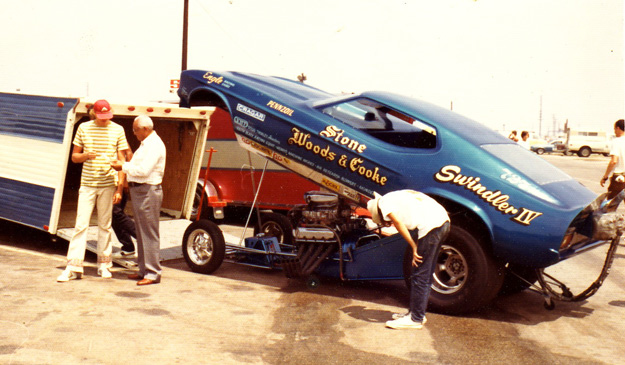 And finally, there's so much for me to love about this photo. It was my first trip to Irwindale, in the fall of 1971 (a month or so after my first trip to the drags, at OCIR). This is the Stone, Woods & Cooke Mach I, dubbed Swindler IV, which "Mighty Mike" Van Sant drove. I believe it's the last S-W-C car to race. Also worth noting is the trailer -- hard to believe that car even fit in there! -- and I'm pretty sure that's Tim Woods, second from left, talking to someone who might have even been Van Sant. Also worth noting is the "e" at the end of "Cook"; the original team had been Fred Stone, Woods, and driver Doug Cook. After Cook stopped driving, Woods carried on the S-W-C name by adding the last name of his secretary, Abie Cooke, to the car. Clever, no?

OK, kids, there's just some of my collection to go with the many of yours that I've showcased throughout the years and will continue to share if you send them to me (with notes, please!). I'll see you next week.