As “Jungle Jim” Liberman probably would have exclaimed, having the No. 1 Funny Car of all time on the fan-voted top-20 list is pretty “farrrrrr out.”

As you can see in the final table below, the Insider Nation didn’t agree with much of the fan vote, but they did agree on No. 1, as did two-time Funny Car world champ and current NHRA on FOX analyst Tony Pedregon, whose personal top 20 didn’t mesh much with the other lists.

And when I asked you last Friday for a quick head to head between just Liberman and Force, the results were similar, with Liberman winning a close battle, 52 to 47 percent..

All of the votes favoring Liberman seem to reflect both the fans’ love for nostalgia -- Dana Peterson, cylinder-head guru at Brad Anderson Enterprises and a teammate on my weekly recreational hockey team, opined in the locker room last week that maybe it was because so many of us grew up building the Revell model of that famed Vega -- and the unmitigated fact that Liberman is still a legendary figure in our sport nearly 40 years after his passing. The fact that Force was right there, a wheel length behind Liberman, also affirms his position in the class’ history as one of its most popular figures. Add his winning record to his unprecedented popularity, and he’s probably the top Funny Car driver of all time by almost any other measure.

Yet even Force remains in awe of Liberman. He shared several stories with me about his all-too-short interactions with “Jungle Jim,” encounters that left a lasting impression.

“I was at Edmonton [Int’l Speedway], I’ll never forget it,” Force said. “His car was up on jack stands, and he was underneath doing the bottom end and then reaching up to turn the motor over by himself. I’d never seen that done before. He was a one-man band.

“Another time when I’m supposed to run him, and he’s late again, so they tell me I have a single. I do my burnout, and here he comes, burning out down the return road like a wild man, but they sent me on a single. Here’s where the story gets interesting. I used to sell my old firesuits so I’d have enough money to buy the next one, and I sold it to some guy who ended up working on the emergency crew. He was wearing it when ‘Jungle’ comes back up the return road, and he runs over and grabs this guy by the shirt and starts choking him. I thought, ‘He’s nuts!’ I ran over there, and people were telling me ‘Jungle’ was beating up John Force because he wouldn’t wait on him. I ran over and saw what was happening and told ‘Jungle’ that I was John Force. He looked over and said, ‘I know who you are.’ I didn’t understand why he was doing that, but he told me later, ‘It’s all part of the show, kid.’ "

Far and away the most emotional that Force gets when talking about “Jungle” is his interaction with Old Bridge Township Raceway Park owner Vinny Napp, who had the extreme fortune to have Liberman as a regular calling card at his Englishtown track.

Force recalls, “I got a phone call from Vinny Napp, who told me that ‘Jungle’ had passed, and he told me he needed me to come to his track because he needed another ‘Jungle Jim.’ I told him, ‘I’m no ‘Jungle Jim’; I can’t even win a race,’ and he said that ‘Jungle’ didn’t win all the races either, but he was an entertainer, with his long burnouts and ‘Jungle Pam.’

“So I went to Englishtown, and I told Vinny again, ‘I ain’t no “Jungle Jim," ' but I did want a [comped hotel] room; no, I want two rooms. And I want to have a life and make some money. He got all emotional, almost crying, because he really loved ‘Jungle,’ and he told me, ‘I lied to you. No one will ever replace ‘Jungle,’ but if you listen to me, I’ll make you a star at our Wednesday night shows, and that’s when I started staying on the East Coast, running Atco, Reading, New England. Staying back there, I ended up at this little burger place – best burger I ever ate – and there was a picture of ‘Jungle’ on the wall because he used to eat there. So I’m sitting there with a couple of my guys, and two young girls walk in and said they wanted to talk to me because I was a race car driver. This is back in 1978, before I was ever in the NHRA circuit. And they said, ‘Did you know “Jungle Jim?" ’ because he used to come in there all the time. I gave them an autograph and felt like a real big shot; it was amazing to be part of that era.” 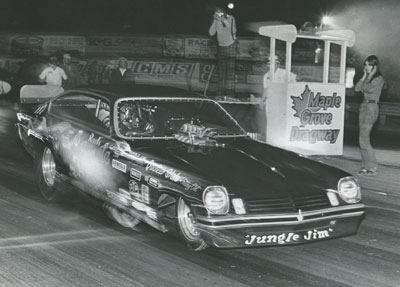 Mike Lewis, who ran Maple Grove Raceway when “Jungle” was its biggest attraction in the 1970s, shared a favorite Liberman memory with me.

“Our NHRA divisional races drew 16 or more Funny Cars for eight-car fields back in the 1970s,” he recalled. “We negotiated match race fees with local and touring teams with the stipulation that they ran the NHRA race, and ‘Jungle’ was no exception. He honored his commitment each year, often bringing a second car with Roy Harris or Jake Crimmins at the wheel. The fact that NHRA officials were in charge didn’t change his penchant for arriving last-minute.

“One year around 1975, he arrived with only minutes until NHRA Tech was scheduled to close. I followed his box truck with my company car and handed him my keys and a tow strap with advice to get his car into the tech line without delay. He made it with seconds to spare. By late Saturday, ‘Jungle’ advanced to the final round against Tom Sneden’s Bob Banning Dodge. Although racing for a fraction of his match race fees ‘Jungle’ delivered his normal long, smoky burnouts, each followed by a dry burnout in spite of NHRA rules prohibiting second burnouts. (Fans loved the burnout ritual mostly because they got to see ‘Jungle Pam’ twice each run.)

“His second burnouts were just over the starting line in qualifying but were a little longer each round until NHRA officials issued a warning. When ‘Jungle’s’ dry burnout took him past the Christmas Tree in the final, an NHRA official had enough. He rushed out of the tower to declare a disqualification only to watch Sneden follow suit with his own dry burnout to the Tree. In the ensuing race, Liberman won the event title after which he posed for pictures with the same NHRA official as if nothing happened. He then ventured to the Maple Grove bar and broke out his harmonica. On a really special occasion, Lew Arrington would play alongside with his spoons. Then, well after midnight, ‘Jungle’ and Pam would typically climb into their truck and head off to Epping, Englishtown, or Capitol Raceway, where they would again arrive with just minutes to spare.

“Jim Liberman gave a lot of us premature gray hair, but he never let our fans down.”

So, what became of the famed Vega? It has been well-documented that Liberman sold it to “Nitro Nick” Boninfante, who had Frank Siti put a ’74 nose on it and turned it into one of his U.S. Male entries, driven by Pat Walsh. Boninfante’s son, Nicky, helped fill in the blanks after that, telling me recently that they then sold the car to Alex Hopper, a Philadelphia-based employee at US Air and Piedmont who ran the car under the name Thor.

Although he only ran the car one season, Hopper held on to it for decades. Eventually, it came to the attention of Don Garlits, who reportedly saw a classified ad for the car in Hemmings Motor News. Garlits made a few investigative calls, enough to convince him to hook up a trailer and head for Bloomsburg, Pa. He gave the car a thorough look-see, and because he was familiar with the way that chassis builder Romeo Palamides built his cars, was convinced (the giant embroidered “J.J.” in the well-worn driver’s seat wasn’t a bad hint, either).

The car now resides in the Don Garlits Museum of Drag Racing in Ocala, Fla., and still features Boninfante's nose job. According to Nicky, Siti had the original flat nose on the wall of his shop for a long time, but it was lost after his passing. It’s too bad that Garlits couldn’t reunite the two pieces, but it's still very cool that the actual car exists and is on display for all to see.

Also, it's worth noting that although it was the flat-nose '73 Vega that we were celebrating (and I honestly can't tell you why the fans picked that one over others), Liberman himself did run the slant-nose Vega body in 1974 (most famously in the wheelstanding final at the 1974 Summernationals, as shown in this great Tim McDonough photo that graced the cover on one of NHRA National Dragster's Readers Choice issues that had a story on "Jungle" in it), as well as the red version in which he won the event the following year before switching to a Monza. 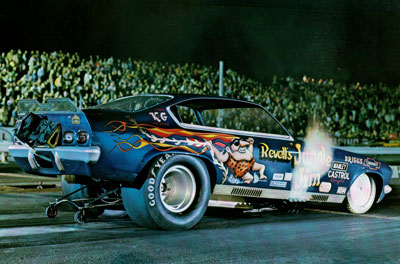 “Jungle Jim” Liberman certainly didn’t need this honor to cement his legacy in our sport; that was done long before that fateful September 1977 crash, but I keep going back to how National Dragster handled his passing.

As you may know or have gathered, Liberman and NHRA could be at odds over a number of things, so it’s surprising to look back at the Sept. 23 issue and read what was published.

Now, you have to realize that back then, Wally Parks still had a pretty stern hand on the tiller and frowned on overly sentimental prose in Dragster, but this one must have gotten an exemption. I sense enough of a semi-black-sheep tone to suspect that perhaps even Parks himself may have written it.

The tribute to Liberman (“racer, innovator, promoter, showman and rebel”) reads, in part: “Outlaw or superstar; flakey or fantastic, whatever one's personal opinion of ‘Jungle Jim,’ the sport will not be the same without him. He's gone before his time, perhaps even before his prime. We all will most certainly miss him. But as long as there are Funny Cars, we won't forget him. His is a name that is synonymous with the Funny Cars simply because he did more than any other man to popularize Funny Car drag racing. The success that those hybrids now enjoy is ‘Jungle's’ legacy. We are all indebted to him for it.”