08 Jul 2016
Phil Burgess, National Dragster Editor
DRAGSTER Insider
I hope you all had a safe and sane Fourth of July and are ready to dive into the teeth of summer. I'll be in Chicago this weekend for the K&N Filters Route 66 NHRA Nationals at fabulous Route 66 Raceway. 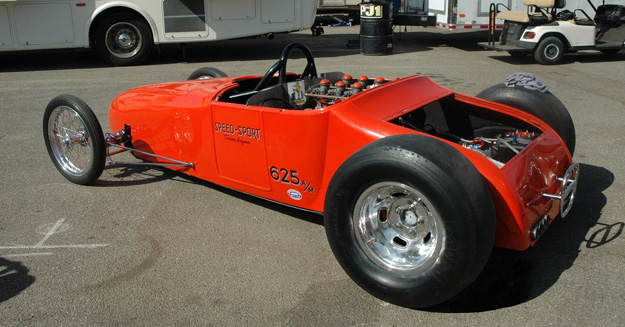 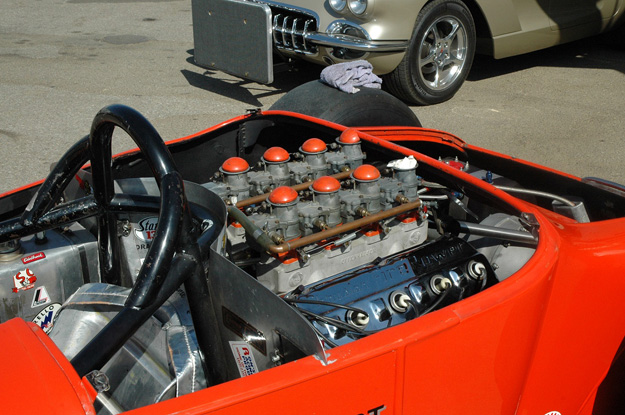 When you walk through the pits at the California Hot Rod Reunion, you will run across lots of early vintage race cars, like this Speed Sport roadster powered by a mid-1950s Chrysler Firepower hemi with eight two-barrel Stromberg carburetors. This car clearly demonstrates, as do many other cars from this period, that rear-engine (again I must say mid-engine) cars were not just a recent invention. (I must also confess I digitally altered the top photo. There were a number of greasy rags under the left rear wheel. I did not want to upset anyone by messing with this car in any way, so I left them there along with the one on the top of the right rear wheel.)

The Master & Richter Special Top Fuel dragster, circa 1963, powered by a 392-cubic-inch Chrysler hemi in the pits at the California Hot Rod Reunion. The Kent Fuller chassis has a wheelbase of only 112 inches. That is certainly small when compared with today’s 300-inch-wheelbase Top Fuel cars. In this configuration, it was capable of running high-seven-second e.t.s at close to 200 mph in 1963. 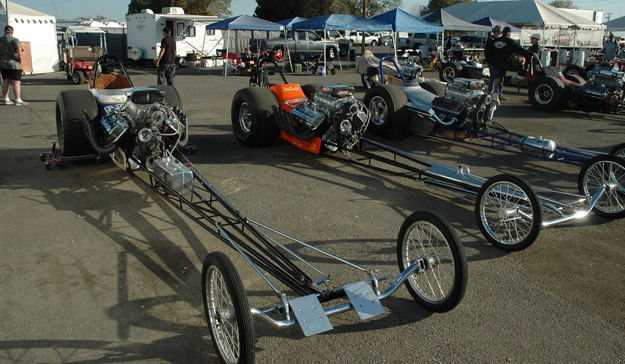 In the foreground is the BankAmeriCar car of Don Ewald. The story is that Don financed this car using his Bank of America credit card to build it. When Kenny Youngblood was doing the original lettering on the car, Don told him this. Youngblood thought BankAmeriCar would be a good name for it and painted that on the cowl in front of the driver.
The car next to it is Don Ewald’s MasterCar. I assume once Don maxed out the BankAmericard, he applied for a MasterCard and built this dragster. Both have been restored to perfection! Not sure about who the third car in this picture belongs to.
The pits at the California Hot Rod Reunion are always loaded with a huge number of Cacklefest cars. I think it is the BankAmeriCar car that was the emphasis for the advent of the Cacklefest car. Most of these Cacklefest cars are 1950s and 1960s front-engine nitro cars restored to their splendid former greatest. Each year, more and more restored Cackle cars show up in the CHRR pits. 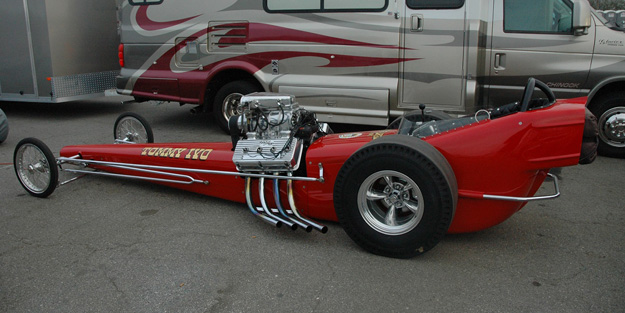 OK, while I said the 1972 front-engine dragster of Danny Ongais is my all-time favorite dragster, your hero and mine, "TV Tommy" Ivo’s first supercharged Barnstormer dragster is an extremely close second. I remember very vividly seeing this car run on the SoCal dragstrips in the early 1960s and how beautiful it looked, in addition to running great numbers.
You have to love the “weed burner” headers. These headers came by their name honestly since the exhaust from them would occasionally set dry brush near the edge of the track on fire. This was a moderately frequent occurrence at San Fernando Raceway.
Part of the thing making this deal so great is Ivo himself. He was an extraordinary showman and self-promoter. He loved the spotlight and still does, every part of it. The story has been told a thousand times about when he match raced a jet-powered dragster and stuck a hot dog on top of his helmet to be roasted when the jet flew by. Showmanship at its best! But do not dare mention his match race against a Turbonique-powered go-kart driven by “Captain Jack” McClure.
I shot this photo early Sunday morning in the 2015 California Hot Rod Reunion pits before virtually anyone was up and about. The car has been immaculately re-created by Ron Johnson in great detail. I must have shot about 50 photos of this car, drooling all the time – but being careful not to drool on the car itself. I was tempted to climb in the driver’s seat but resisted doing so purely out of respect for this car. I suspect the reason for shooting as many pictures as I did was that subconsciously I was waiting for Ron Johnson or someone else to show up so I could ask them if I could try it on for size. No luck, though, as no one ever appeared while I was there. 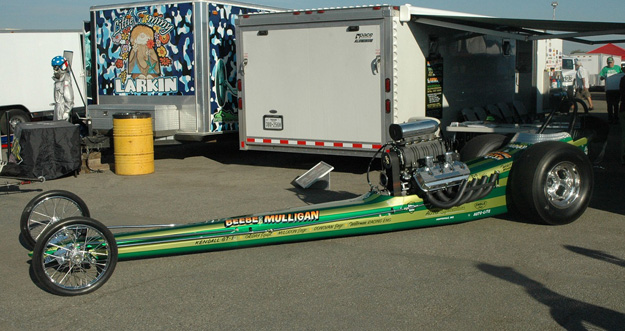 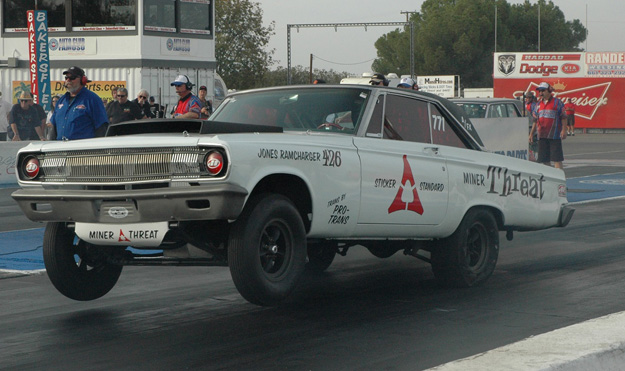 The “Outer Limits” A/Factory Experimental altered-wheelbase Dodge owned and driven by Joel Miner. Here he is just starting to launch off the starting line at the 2015 California Hot Rod Reunion. I really needed to be a little farther downtrack as his normal starting-line wheelstands are 3 to 4 feet high, but I did not want to get in the way of the professional photographers! 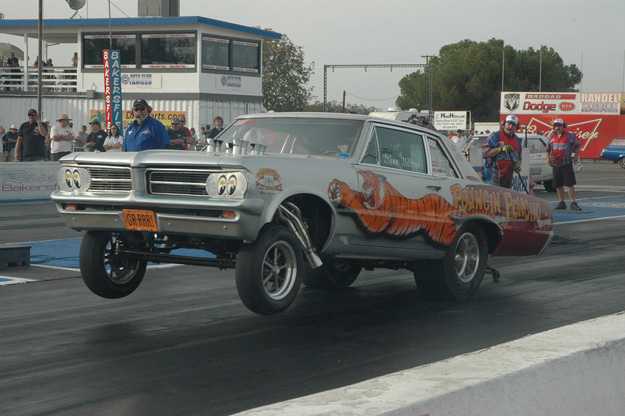 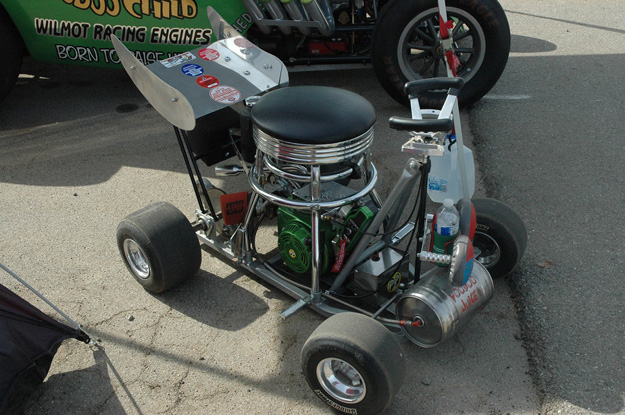 While walking around the California Hot Rod Reunion pits, you can encounter a large variety of different types of vehicles. Here is someone’s personal transportation to get around in the pits. Hot rod ingenuity at its finest. It is parked next to the Voodoo Child A/Fuel Altered. Although I might question its stability during cornering. But then drag racers generally are not concerned with turning right or left. As the saying goes, “If you can turn right or left, you are not going fast enough!” 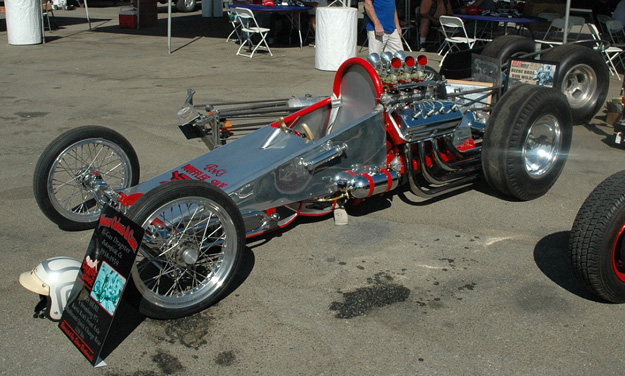 The 1958 B/Gas Dragster of Warren, Coburn & Crowe. This car was on display in the California Hot Rod Reunion Nitro Alumni Hospitality area. The display plaque on the front of the car says it is powered by a 459-cubic-inch hemi. Again, yet another example of an early short-wheelbase rear-engine dragster. While I never saw this car actually run, I was a huge fan of the Warren, Coburn & Miller Ridge Route Terrors cars that followed this one.


OK, readers, that's a wrap on the Nielsen Files. Some great stuff and a real testament to the great and individual things that catch our eyes and make them water, even without nitro. If you have some images and stories to share, let's have them. You can have your own memories, but it doesn't mean you shouldn't share them with the rest of us diehards!