01 Jul 2016
Phil Burgess, National Dragster Editor
DRAGSTER Insider
If you’ve been around this column for any length of time, you know there’s no measuring the depth of love and respect I have for followers of this weekly cornucopia of drag racing stream of consciousness. And you probably also know there are a dozen or more guys upon whom I can count for regular input and feedback on the week’s musings, guys like Cliff Morgan, “Nitro Jon” Hoffman, Mark “Hog Wild” Elms, Mark Watkins, and Gary Crumrine, who are my brothers from another mother when it comes to this stuff.
Then there’s Robert Nielsen, who from the early days of this column has been a frequent contributor, foil, friend, instigator, ally, and conscience. Equal parts passionate and obstinate, he’s just as likely to salute a column as he is ready and eager to take me to task for a statement or opinion. If I say Roland Leong is Hawaii’s greatest drag racing export, he counters with Danny Ongais. If I say the Corvette was America’s sports car, he sides with the Shelby Cobra. If I say a dragster is rear-engined, he insists it’s more properly a mid-engined car. Man, do I love this guy.
Way back in February 2010, Nielsen was one of the first to accept my challenge to readers to submit their personal photos, and he responded with a wonderful collection of doorslammers from NorCal, SoCal, and Arizona. Not only did he supply the photos, but he also provided great detailed information about the subjects. You can find that submission here, and, guess what race fans, he’s back for more, responding to my own collection of photographic flotsam with another batch of pics that’s split between old and new photos of vintage drag iron, with a history lesson or two thrown in for good measure. He sent more than two dozen, which I’ll break into two parts. 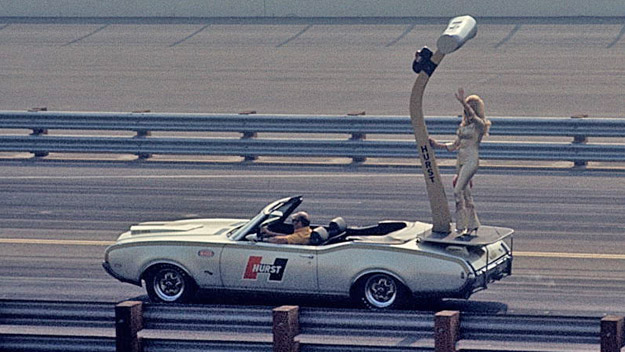 Linda “Miss Hurst Golden Shifter” riding on the back of an Oldsmobile at the 1970 NHRA Supernationals at Ontario Motor Speedway. I was moderately surprised when I saw this because one of the NHRA’s mottos is “Dedicated to Safety.” So I ask you, how safe is it to ride on a platform on the back of a car in high-heel shoes without any safety constraints?

The Candies & Hughes 'Cuda out ahead of the Pisano & Matsubara Camaro at the 1970 NHRA Supernationals at Ontario Motor Speedway. An instant later, Sush Matsubara’s Camaro made a hard right turn into the Armco barrier and crashed heavily. Parts of the Camaro broke off and headed downtrack, where Les Lovett was trying to escape this debris. Unfortunately, he was not quick enough as a shock absorber hit him in the ankle and broke it. One of the many perils of being a trackside photographer!

The 1972 front-engine dragster of Danny Ongais. The photo was taken from the stands at the 1972 NHRA Winternationals in Pomona. This is at a time when a lot of the Top Fuel dragsters were switching to the rear-engine cars (and it pains me to say rear-engine since they are really mid-engine cars as we have discussed), but Ongais is attempting to buck this trend. The car has to be one of my all-time favorite dragsters. Not only is the car a beautiful work of art, but it is also owned and driven by Ongais. Ongais is probably one of the best race car drivers of all time. He excelled at driving Top Fuel cars, Funny Cars, Indy cars, and Formula 1 cars. You have to love the wing mounted above the engine to try to overcome some of the advantages the rear-engine cars had. 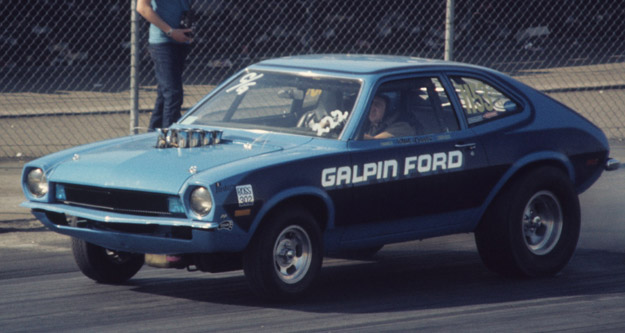 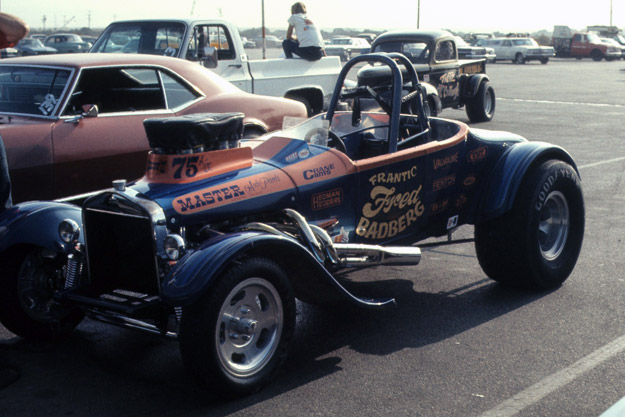 “Frantic Freddy” Badberg’s fuel-injected A/Street Roadster in the staging lanes at Lions Drag Strip, circa September 1972. Badberg was one of the regular racers who frequented Lions.
I am definitely an old-school drag racer. That also makes me a nostalgia drag racing fan to the nth degree. For a number of years, Larry Knapp, my longtime friend and fellow racer, had been trying to get me to come out to the California Hot Rod Reunions in Bakersfield. I had managed to resist this since I was afraid once I did, I would be bitten by the drag race bug once again. In October 2013, I did go to the CHRR since I could not stand Larry’s constant bugging to come out and see his car run again. So far, I have managed to resist the temptation to build another car, but that is only because of my wife. She says she wants me around for a long time and is afraid I would not be if I started racing again. It is extremely difficult to put up a defense against that sort of argument. As a result, I have had to be content (for the time being anyway) with getting my drag racing fix through my friends and their race cars. But this is proving to be a very difficult urge to resist any longer. 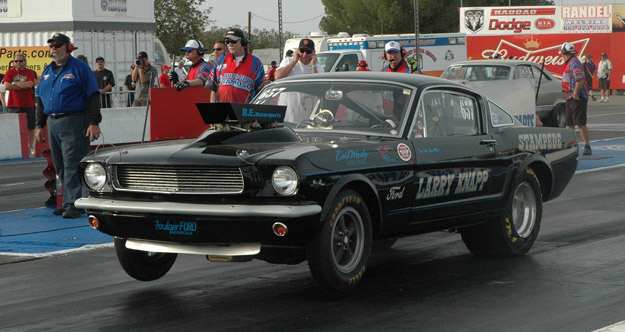 Larry Knapp’s 1966 Ford Mustang at the 2013 California Hot Rod Reunion. This was one of the first Mustangs built by Holman and Moody, Long Beach, Calif., after they were commissioned to do so by Ford Motor Company. It was built specifically to run in the A/Factory Experimental class. Larry now occasionally travels from his home in SoCal to run in various Nostalgia A/FX races across the country. His car is powered by an Earl Wade-built 472-cubic-inch Ford single overhead cam (SOHC) engine backed up by a four-speed Lenco transmission. Larry has been running this same car for almost 50 years now! 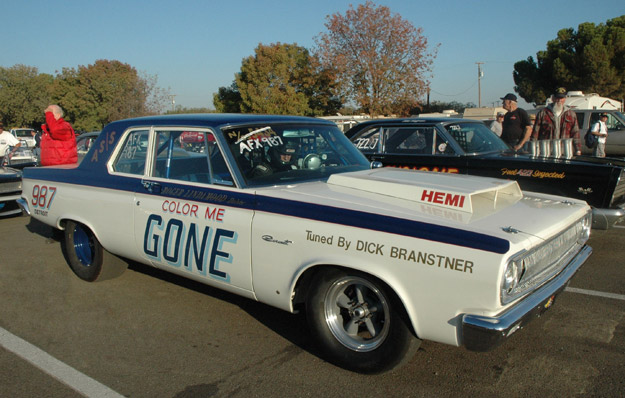 In the staging lanes at the 2013 California Hot Rod Reunion with the Roger Lindamood Color Me Gone tribute car. This car was built to run in the Nostalgia/Super Stock class, but since this class is not run at the CHRR, he is running in the A/Factory Experimental class. 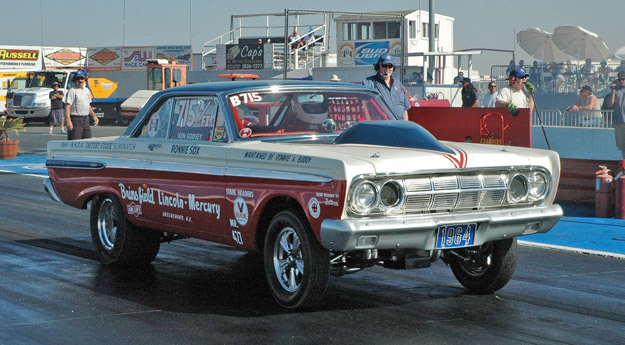 This is a Sox & Martin 1964 Mercury Comet tribute car built and run by Ken Godsey at the 2013 California Hot Rod Reunion in Bakersfield. It is powered by a 427-cubic-inch Ford FE, with two four-barrel carburetors and a “you-shift-’em” four-speed Ford Top Loader manual transmission. Ken lives in the Denver area and makes the trek down to Bakersfield for the CHRR every year. In addition to this car, Ken recently acquired the original Kenz & Leslie 1966 Mercury Comet Funny Car. The K&L Comet was one of the flip-top Funny Cars along with those of “Dyno Don” Nicholson and Jack Chrisman. Ken is in the process of restoring the K&L Comet. Hopefully this restoration will be completed soon and be at the 2016 CHRR along with his 1964 S&M Comet. 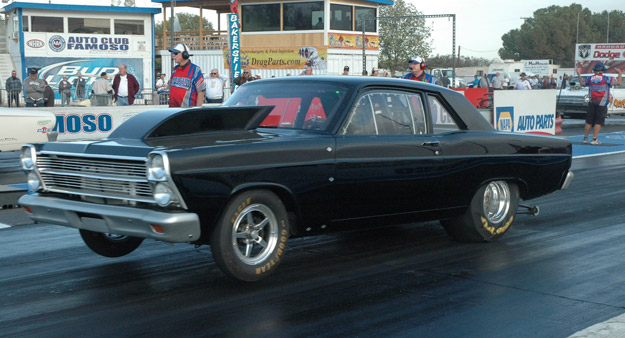 A typical wheels-up launch for many of the A/Factory Experimental cars running at the California Hot Rod Reunion. This is Dennis King’s 1967 Ford Fairlane. It has a 472-cubic-inch 945-horsepower Ford FE engine with a Glide transmission. This car ran 8.83 and 150.60 at the 2014 CHRR. Dennis is another drag racer who has been around for a LONG time. In 1984, Dennis campaigned an A/Altered he called Asian Flew. That car won Competition eliminator at the NHRA Gatornationals with driver Danny Townsend. Lettered on the back of both of these cars are the initials TPTR – which means Too Pretty To Race. And both of these cars live up to that!

Another A/Factory Experimental car at the 2014 California Hot Rod Reunion was the 1961 Ford Starliner belonging to Dave Franklin. He runs a 600-plus-cubic-inch Ford 385 engine in Old Yeller. This is another car that has seen the dragstrip virtually from the day it left the showroom floor. Dave is also the president of American Nostalgia West Drag Racing and organizes most of the ANWDR races, including the CHRR A/FX race.

Just a little 1956 Nash Metropolitan with a huge 500-cubic-inch supercharged big-block Chevrolet engine owned by Bryan Thatcher. This car runs at the California Hot Rod Reunion in the A/Gas class. With this extremely short wheelbase and the power the engine makes, I think you need to have a screw loose to want to drive a short-wheelbase car like this one. It probably is going to go anywhere it wants to, which is most likely not in a straight line. (Do you happen to know anyone who is crazy enough to have driven a similar car?) 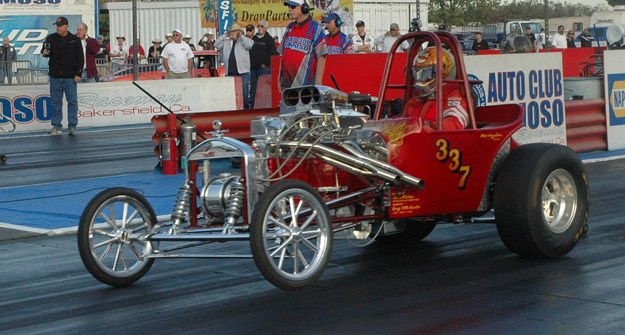 I also love altereds. All kinds of altereds! This gorgeous little roadster is another of the many cars frequenting the California Hot Rod Reunion. I do not know much about the car other than it is simply as gorgeous as they come!