I hope you all saw the reveal last Sunday on NHRA.com (or Saturday on the FOX show) of our Top 20 Funny Cars catch-up. We unveiled Nos. 18 to 20 to catch up to Tony Pedregon’s separate list that he began a few weeks ago, and I thought it would be interesting to take a look at what maybe went into the rankings. (I'll do one of these every five or so reveals, just to get the vibe from fans, so feel free to send along your thoughts on the picks.)

And here’s the video that ‘splains it all, followed by my thoughts.

Several of you wrote to express surprise that Snow’s Rambunctious car was ranked so low because, for those of you who were fans back then, the car was a stone-cold killer and the first to run 200 mph. And, of course, it carried “the Snowman" to NHRA’s first season championship in 1970. I had it rated slightly higher on my personal list. In case you missed it, you can read more about the car in this column I did earlier this year about that important 1970 season. For the record, the Insider Nation ranked this car 15th in the poll I posted two weeks ago. 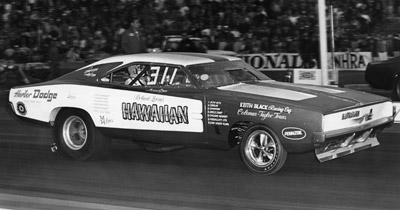 Being a longtime Roland Leong fan (plus it's our shared birthday Sunday; “Hau`oli La Hanau,” Roland!), I wish there had been a way in this Top 20 poll (or maybe something parallel) to salute his body of work rather than individual cars. The Hawaiian Funny Cars were staples of the class for three decades and known to every drag racing fan from coast to coast. The Hawaiian Punch car on the list probably had the best visibility due to its sweep of the 1991 U.S. Nationals, barrier-breaking 290-mph pass, and better television coverage, but I wonder in hindsight if one of those bitching early Chargers, with the recognizable bamboo lettering (as remembered in this column), might have gotten a better response from fans who know the name but not the 1991 car. Interestingly, the Insider poll also ranked this car No. 18.

The Chrisman car on the list was not part of my personal top 20, but anyone who saw it run in 1967 won’t forget the dizzying speed performance it exhibited. Chrisman was such a big part of those formative Funny Car years – the stock-bodied ’65 Comet that blew everyone’s mind in Indy, the first-gen flip-top Mercury of 1966, and this car – but I guess it’s not surprising that the car did not have the mass appeal of some of the others on the list given the wide demographics of a general poll. The older/nostalgia-skewing demo of this column’s readers ranked it No. 17.

So here's a quick recap:

Pedregon’s choices have been interesting because he wasn’t confined to ranking on a predetermined top 20, and they reflect a personal taste rather than also trying to wrangle in considerations about the cars’ impact on the class or on-track success. 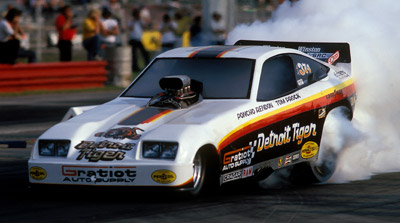 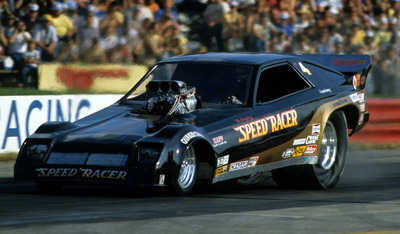 I, too, loved the Detroit Tiger Monza – I always thought Monzas were some of the best-looking Funny Cars – and Prock and Poncho Rendon’s beautiful example was a showstopper. Being a huge (huge!) Armstrong fan, I was glad to see him acknowledged for his work on Kase’s Speed Racer. The car certainly had its share of troubles (including that nasty fire at the Springnationals), but the fact that “AA Dale” drove the car to a 5.89 national record run in his final race in the car (1981 World Finals) before heading into what would be a long stint tuning for Kenny Bernstein showed us all what he was capable of, a fact that he showed us over and over for two decades. And, of course, after having interviewed Segrini for a recent column and noting his dismay over not making the fan-vote Top 20, it was cool that he made Pedregon’s list with the Black Magic Vega.

We’re going to unveil No. 17 in the same fashion this week, first on Saturday’s FOX qualifying show from Topeka, then on NHRA.com Sunday morning in case you missed it or don’t have FS1. As a little bit of a teaser, the No. 17 car made one of the great passes in class history and was a bit higher on my personal list but lower (No. 19) on the Insider poll. Ah, the suspense!