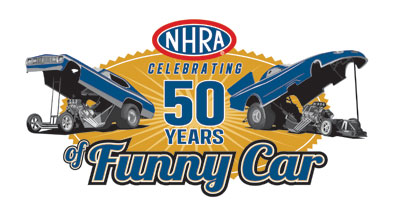 Another month in the books, and another four cars have been revealed in the Top 20 Funny Car fan vote, with another coming Saturday, which will bring us up to No. 12.
Here’s what has been revealed so far:
14. Ed McCulloch Revellution Demon
15. Danny Ongais/Mickey Thompson Mustang
16. Kenny Bernstein Bud King Tempo
17. Don Prudhomme Pepsi Challenger
18. Jim White/Hawaiian Punch Dodge
19. Gene Snow Rambunctious Challenger
20. Jack Chrisman Comet
We discussed Nos. 18 through 20 when they were unveiled, but I got some frowny faces about Prudhomme’s Pepsi Challenger – famed for its otherworldly 5.63 blast at Indy 1982 and the barrier-breaking 250-mph pass earlier that year at the Cajun Nationals – ending up No. 17. As you can see in the chart below, the Insider Nation actually had the car ranked much lower (No. 19). 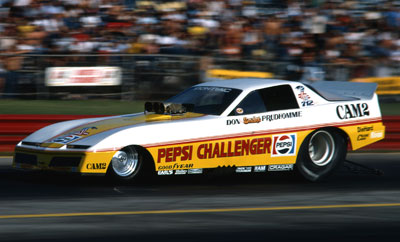 Opined Eric Widmer, “Prudhomme's 5.63 was about two-tenths quicker than the quickest Funny Cars of the time. It was akin to John Mulligan's 6.43 when the quickest of the other fuelers was 6.73 at the time in, where else?, Indy. In my opinion, it would make ‘the Snake’ head and shoulders above everyone else at that moment in time.”

I wrote a pretty in-depth column about that incredible 1982 U.S. Nationals event -- including the “nitrous or not” controversy -- that you can find here. I interviewed many of the major players, including Prudhomme, Dale Armstrong, Billy Meyer, Austin Coil, and Ken Veney; it’s some interesting reading about an interesting point in the class’ history. 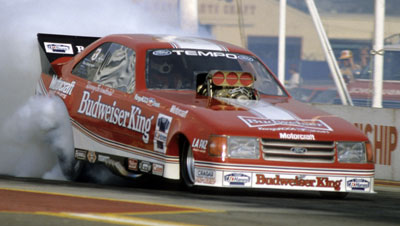 Insider readers conversely ranked Bernstein’s 1984 Bud King Tempo several places higher than its fan ranking, obviously understanding the car’s role in the growing aero wars that would follow. I remember the first time I ever saw this car, at preseason testing at then Firebird Int’l Raceway outside of Phoenix, where Bernstein and Armstrong had granted Leslie Lovett first crack at the wild piece. It ran as a cover story, complete with a multipage story inside from extensive interviews that I did there and, later, on the phone with Armstrong. From its rounded fenderwells to belly pans, lip splitters, enclosed side windows, and more, it was one sexy piece and set the standard going forward. (Remember when Funny Car aerodynamics were some small front fender bubbles to lower the front end a few inches?)

The Ongais/Thompson Mustang at No. 15 was pretty shocking to some of us – the Insider faithful had it ranked much, much higher – and as we have discussed here, the car was perhaps as important for its contributions – some might argue more important – as many cars on the list.
“I don’t think a single car made more far-reaching technical changes to the sport,” said Insider reader Mark Watkins. “The chassis, the headers (the original ‘new’ header design), the exotic powertrain. Mickey Thompson was a noted free thinker and had a keen eye for engineering talent. These converged into this game-changing car. If Thompson had Bernstein's or Prudhomme’s focus, this could have been the start of a decade-long domination.”

As a huge fan of “the Ace,” I was disappointed that the Revellution Demon wasn’t ranked higher, either by fans or by the Insider voters. The car was a killer in 1972 – maybe the only car that could rival the famed Pat Foster-driven Barry Setzer Vega? – and, in my opinion, is easily the most identifiable car on McCulloch’s résumé. Because I would include “the Ace” on any Funny Car top-10 drivers list (maybe even in my top five), it stands to reason that this signature car ranked higher on my personal list.
Rabid Funny Car fan Mark “Hog Wild” Elms’ email expressing his disappointment on “the Ace’s” place began with the subject line “I Can’t Believe It” and went from there. “I believe Phil y'all should have set age limits on the voting,” he wrote. “I feel that many, many fan voters just didn't have the experience that you and I and many of your contributors have. Ed McCulloch was a badass, great driver and I believe he won the U.S. Nationals a few times, too. I figured Bernstein, Nicholson, or Beckman was next. I watched Ed many times, and I have that 1/18th model of his car still in the box."
So here’s a quick recap of the fan vs. Insider vote. 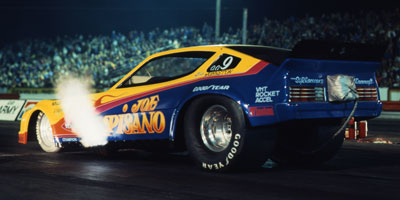 I broke down his 18 to 20 previously, and, on a pure fan basis, I love his 14 through 17 picks. I’ve been a big Pisano fan since I built my first Revell model, the 1973 Pisano & Matsubara Vega. “Papa Joe” always had the coolest paint schemes in the 1970s, and the Arrow certainly was one of them with its bold flames graphics.
The War Eagle Trans Am is the first of Pedregon’s picks that also is on the fan-vote list, but substantially higher. Like the Pisano cars, Pulde and partner Mike Hamby’s rides were always sharp, and combined with the ultra-sleek profile of those Trans Am bodies, it looked fast even standing still.
I’ve also always had an affection for the Green Elephant machines, hard-running cars (despite their mythologically “bad luck” green color) that reached a couple of final rounds, including in Indy in 1977. That is the Vega that Pedregon singled out, though they also had success with Frank Hall, Rob Bruins, and Mike Miller behind the wheel. I did a wonderful interview a few years ago with Jim and Betty Green to talk about their history that you might enjoy. Check it out here.
And finally, Bonin’s Bubble Up Trans Am, another car that I was sad did not make the Top 20 list. Bonin was a personal friend of mine, a kinship forged during his post-driving years working in NHRA’s Marketing Department. I couldn’t believe how lucky I was back then, being able to work side by side every day with Bonin and former Top Fuel ace Carl Olson, who also worked at NHRA then. How cool to work with guys you had watched and cheered for! Bonin’s car was also a ’77 Trans Am (Pedregon sure likes cars from 1977!), and the green and red, white, and blue graphics made the car look even more sleek. We lost Gordie a few years ago, but I’ll always be a fan of his.
We’ll unveil both the fan-vote and Pedregon's pick for No. 13 this weekend, so watch for it on the FOX show Saturday or on NHRA.com Sunday. Much discussion to follow, I’m sure.