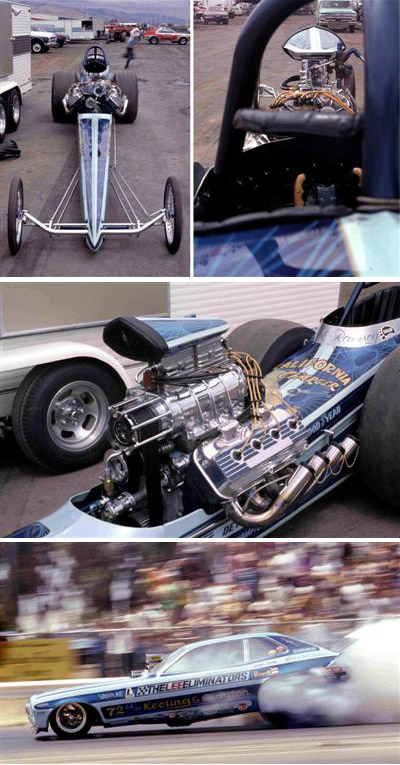 As if I really had any doubt, feedback after last Friday’s column about the Keeling & Clayton California Chargers was pretty huge and cemented my belief that they had one of the West Coast’s most popular teams in the 1970s.

To illustrate as we go along, here's a little eye candy: Larry Solger was kind enough to pass along a handful of photos he took, of both the front-engine Top Fueler and the Pinto Funny Car.

J.R. Ybarra, another “left coast” regular, asked about the exclusion of Billy Meyer from the driving roster for the Keeling & Clayton team. “I believe Billy Meyer had a very short time with the team as I recall seeing him pilot their Mustang at OCIR and was wondering if you could confirm that,” he asked.

Meyer did drive the car for a few months in 1975, a year in which he actually drove three cars — Gene Snow's Vega (while Snow was recovering from back surgery), the K&C car, and the Plueger and Gyger Mustang — while he was working with Hal Needham on a land-speed rocket car. His contract forbade him from owning another team but apparently had a loophole big enough to drive a Funny Car through that let him keep driving for other people. He drove for Snow early in the year, then for Keeling and Clayton, then for Plueger. So, yeah, he really got around that year.

Former Dragster editor Bill Holland took note of the photo of Ramsey and the “trophy queen” in the winner’s circle at the 1970 Supernationals. According to Holland, the lady’s name is Sharon Harvey, and her claim to fame at the time was being Miss Tanya, representing a then-popular suntan lotion.

“Yours truly put the deal together to get Sharon the gig at Ontario. Back then, NHRA used to have ‘trophy queens’ at all the national events, and the late Bob Russo [then the PR director for NHRA] was not noted for picking too many attractive gals,” recalled Holland. “I had a lady friend at the agency for Tanya, got Wally to consider the cross-promotion, and it proved to be a win-win deal. Sharon was an absolute sweetheart. She took the task very seriously and was as pleasant with the winner of Stock eliminator [Marv Ripes] as she was with Rick. In fact, she liked NHRA and the racers so much that she later came to the Division 7 banquet of her own volition. So now you have the proverbial 'rest of the story. ' "

Regarding the dual 6.41s record by Rick Ramsey in the K&C car at Don Prudhomme at the Orange County Int’l Raceway PDA meet in late July, I heard from Mickey Bryant, who with Todd Hutcheson penned an authoritative history on the period in Don Garlits R.E.D., their two-book tale of Don Garlits’ first rear-engine dragster, which in 1971 appeared to have changed the face of the class and seemed poised for world domination.

But, according to them, Drag News also reported that Gerry Glenn had run not one but two 6.41s a month earlier at Lions Drag Strip, leading them to note, “So now we have three guys, in a span of two weeks, running identical fastest-ever times of 6.41 seconds, one of them in a rear-engine machine — and not one of them named Garlits.”

Interestingly, the same weekend (June 25-26) that Glenn ran his 6.41s, Ramsey and the K&C team were at Fremont, where they set the record at 6.51. Garlits, of course, would have the last laugh (as usual) when he ripped off a 6.21 later that year at Indy (not backed up for the record) and a few weeks later broke Ramsey's record with a 6.26 in Gaineville.

Don Hirsch, who calls himself my “fellow Irwindale pit rat,” pointed out something that I meant to but forgot to include in the article, which was a photo of the team’s very unique tool, a prosthetic leg — complete with a tennis shoe — that was wedged into the cockpit to hold the clutch pedal in when the team was towing or pushing the car through the pits. Hirsch spotted it propped against the back of the car in the photo of John Keeling. (T.J. Sitek also saw it but was a little more concerned: “What in the hell is a dismembered right leg with sock and shoe doing by the push bar alongside the Keeling & Clayton digger?") It was in fact a real prosthetic leg that once belonged to Chuck Johnson, a double-amputee Vietnam vet who owned the California Charger with Keeling before Clayton bought his share. When he got a new set of legs, he donated this one to the team.

In our interview last weekend, Clayton recalled how he and Keeling were able to take advantage of their jobs in the airline industry to get their hands on some new tech, but Pat “Ma” Green also remembered that “K&C were the only crew in drag racing using linen napkins for wipe rags!”

On a quick side note, when I called Clayton back this week for some of the answers above, he wanted to express how impressed he is with Don Schumacher's milestone 200th team win. "I've never met him and actually probably wasn't much of a fan, but I'm impressed with how long he's been doing this and kept it going and kept winning. That takes a lot of dedication," he said. "To be able to continue getting the funding takes as much dedication as the guy who wants to go racing but hasn't got the money. I can't imagine the number of people he has to have working with him to get that all done."

In what’s a bit of a mini-Where Are They Now? segment, Clive Banks dropped me a line and a link to a photo gallery of European cars that shows that the final California Charger, the Trans Am Funny Car, ended up in Europe as a Top Alcohol Funny Car for Steiner Stolen in the late 1970s early 1980s. This photo was taken by Steve Hope at Santa Pod. This is also the car that current Mello Yello star Cruz Pedregon re-created for the Nostalgia Funny Car ranks.

Wes Verinder wants to know if anyone has seen or knows what happened to the Pinto Funny Car. “Did it survive the journey through time in someone's barn or warehouse?” he asked. “I would love to make a bracket car out of it if I had the $$$$ to do the conversion.”

And, of course, everyone wants to know about the famous slingshot. “It truly was one of the most beautiful team cars ever built,” wrote Tim Fink. “Whatever became of it?  So many rumors that it’s somewhere in the Northwest waiting for someone to pay an enormous amount of dollars to have it restored. Any ideas?”

I got a great note and the photos at right from Paul Katata, a fabricator who has been working lately with Don Long (who built the California Chargers as well as the Steve Carbone dragster mentioned in my previous column) and helping to restore the famous front-engine California Charger car for current owner Brent Cannon as well as the Carbone car, which is the dragster involved in the infamous 1971 Nationals burndown with Garlits.

“Somewhere in the past, the car was converted to run as a bracket/Comp eliminator racer, although I'm not sure it ever actually ran in that configuration,” he wrote. “We moved the rear-end housing, changed the engine mounts back to an early Hemi, and replaced some of the original tubing and brackets. The car was otherwise mostly original.

In fact, before we hung the chassis up in the rafters of Don's shop, we took careful measurements and documented everything we could to help on our next project. And that would be a re-creation of the previously mentioned car of Steve Carbone. The cars were close enough in order of leaving Don's shop back in the day that there are only a few differences. Of note are quick-release pins holding the engine in and a tilt back rear-end housing for maintenance purposes on Steve's car.

"Right now, there isn't a definite completion date for the California Charger. Work on the chassis is pretty much done. The body is still up at Brent's place and I'm told is mostly complete but is in need of a little work and, of course, paint and graphics. One thing worth noting: Most (if not all) of the aluminum parts on the chassis were not just polished but chrome plated, even the fuel tank and motor plate! I wasn't aware of this until Don and I began working on the car."

Thanks for all of the great info and pics everyone! See you next week.