A Grand (Am) photo gallery 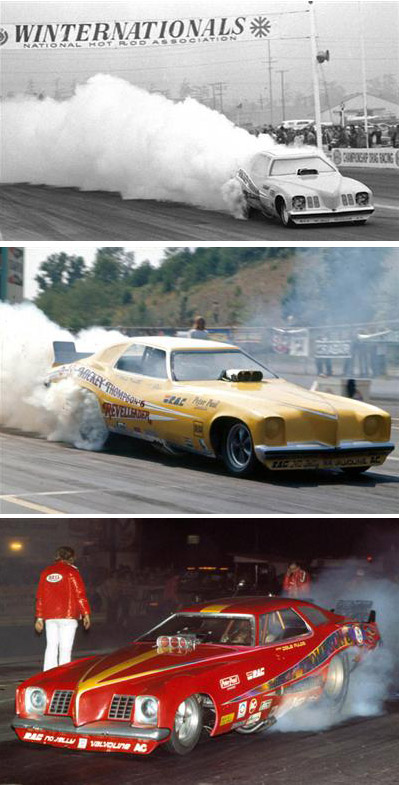 From the outpouring of love and photos surrounding the story of Mickey Thompson’s Grand Am Funny Car, it seems I’m not the only one with a soft spot for “Thompson’s Torpedo.” Below is an amazing collection of images of the car sent in the last year or so by readers of this column after I announced – and then delayed and delayed – that I was working on the article. If you read both parts, you know that I interviewed a lot of people, beginning with body builder Ron Pellegrini and drivers Dale Pulde (three times!), Larry Arnold, and Bob Pickett, plus crew chief Mike Broome, crewmember Pat Galvin, and assorted others not quoted but who gave me information, which is why it took so long to pull it all together. There was conflicting info on some things, old memories turned bad, etc., etc., but I think that the columns tell about as full of a story as can be put together short of interviewing Thompson himself.

The ever-helpful and generous Steve Reyes, who shot the U.S. Marines Grand Am burnout at Orange County Int’l Raceway that I used here last week, sent me a ton of stuff. Reyes, the top lensman of the era, shot the original photo layouts for Revell of the yellow and blue Grand Ams for its model-box art and hero cards. I ended up using seven of them, which you can see in the gallery at right that covers the car through the Butch Maas-Pulde years (1973-74), including its Winternationals debut, and features great shots of the car in my favorite red scheme.

So, that's it (so far). Thanks so much to everyone who contributed with memories, words, or photos to this series of articles. And here I thought I was the only one enamored of this car ...

It's Winternationals weekend, so you know where I am. Wish you were here!