Even though I can’t sing and can’t play a single musical note, I like to think of myself as the creative sort. I've shown a fair amount of ability to put words to paper to construct semi-meaningful sentences (and sometimes even paragraphs on occasion!) about your passion and mine: drag racing. I'm a self-taught Photoshop hack with moderate technical skills that far outweigh any kind of artistic vision I might need to exploit them. I'm a semi-decent photographer. I can see the big picture even if I can’t draw a straight line to create one.

You guys, on the other hand, never cease to amaze me with your creative nature. In the past, I've showcased a bit of your artistry here and there as pieces and parts of various columns, and today I'm devoting this column to showing off more of that.

Because this column has become almost purely devoted to the history of our sport (a far cry from its original vision), let's start there, with artwork from the prodigious palette of British artist Mark Gredzinski. I've exchanged e-mails in the past several years with Mark and shown some of his paintings of historic drag cars here before but didn’t really realize the scope of his talent until I viewed an online gallery of his work, which also includes paint schemes, photos, posters, and much more.

"I'm known as the Kenny Youngblood equivalent in this country, with which I'm flattered," he told me modestly, "but there's much to do before I'm up with the master!" He has been a race fan since the late 1960s and attending events since 1976 before combining his passion for the sport with his artistic ability. 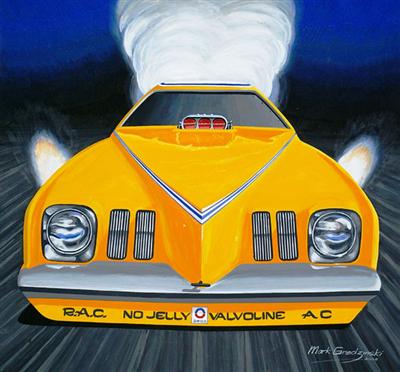 He sent several of his works, including the photo at right, his gouache on illustration board painting of Mickey Thompson's Butch Maas-driven Revelleader from 1973 (I had to look up "gouache"; it's "a method of painting with opaque watercolors mixed with a preparation of gum), and a great photo of the Sundance Monza flopper. Though some of these could have drawn their inspiration from photographs, that's not always the case. "Note that [the Maas painting] is a head-on wide-angle shot that would be impossible to get as a photograph," he pointed out. "I do much research to get these details correct, such as it's Russell Long in the Sundance Funny Car and not Tripp Shumake driving as someone thought." 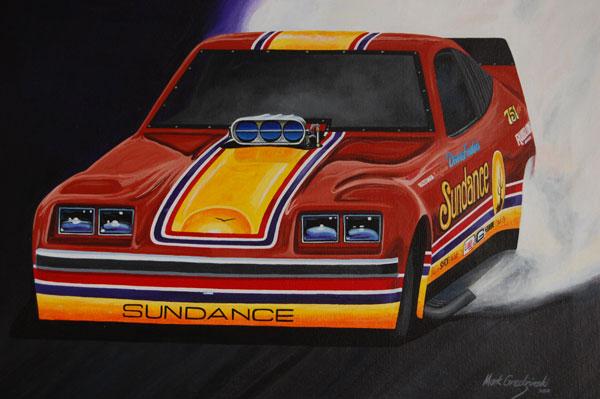 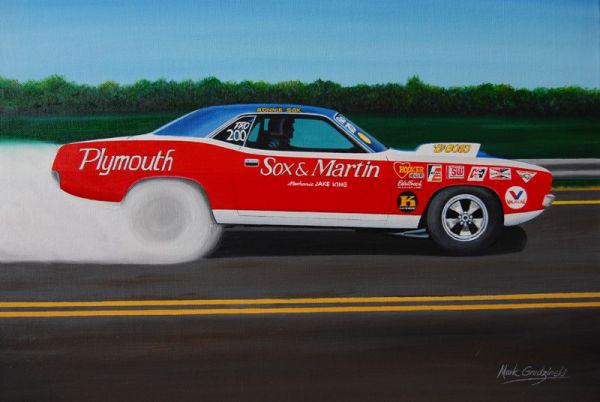 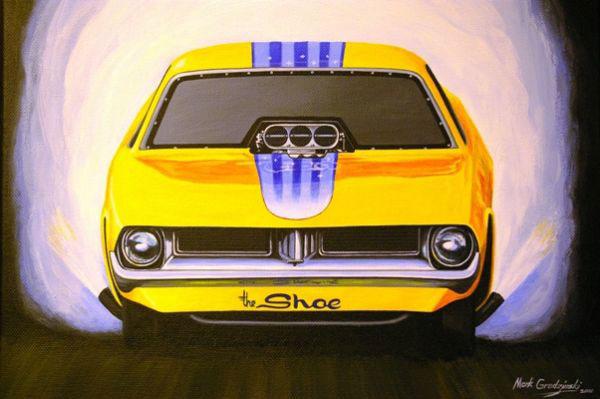 From this side of the pond comes a half-dozen fully dazzling works of art from the airbrush of Ricky Farrow of Katy, Texas. "I had to send you this e-mail saying how much I enjoy reading your column on NHRA.com," he wrote. "The photos and your interviews remind me how interesting the '60s, '70s, and '80s were. If you view the attached images, you can tell I'm a big Don Prudhomme fan like you. I airbrushed some of his most memorable cars. The only non-'Snake' cars I airbrushed were the Pat Foster-driven Barry Setzer Vega and Ed McCulloch's Revellution. I planned this year on having Prudhomme autograph the Skoal Bandit Pontiac painting when the NHRA tour came to Houston, but unfortunately, Prudhomme was unable to secure the sponsorship he needed to field a topflight team and disbanded his team." 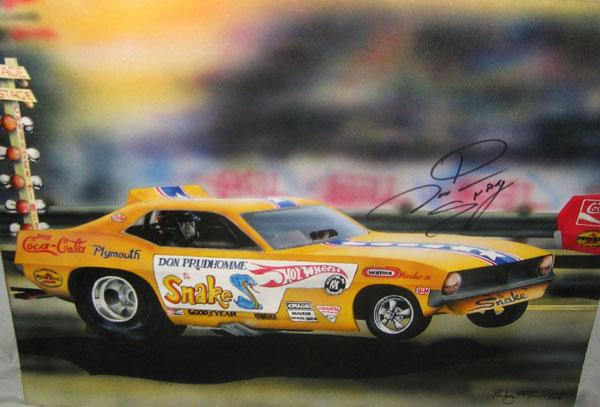 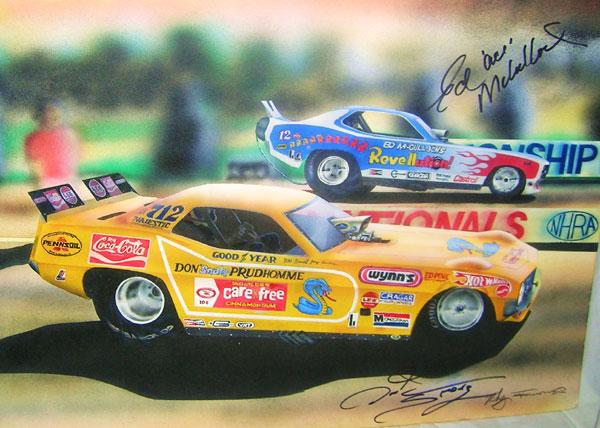 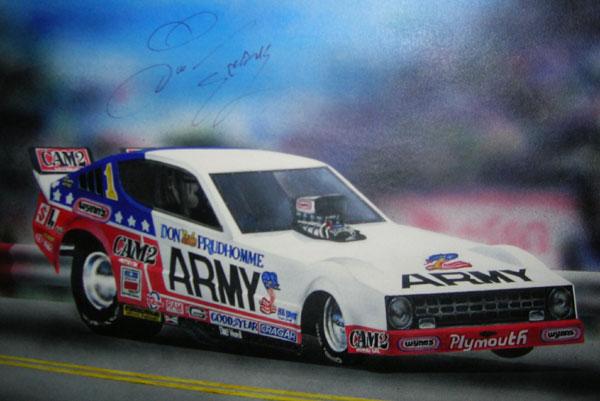 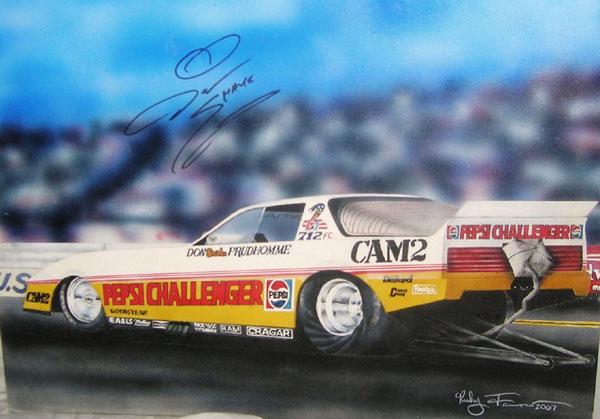 These are really cool images, in a completely different medium than that used by Gredzinski. I've arranged them in chronological order beginning with "the Snake's" '70 Cuda, replete with the short-lived top wing that Chrysler engineers thought was the ticket to creating a stable machine but in fact did the opposite. Of the six, it's the most outlandish-looking painting, but I dig it for its sense of speed. The others depicted therein – the Carefree 'Cuda racing McCulloch in Indy, the '78 Arrow, the '82 Pepsi Challenger, the '89 Skoal Bandit, and the previously mentioned art of "Patty Faster" at OCIR -- all are more realistic-looking portrayals. Most of them are autographed, too. Very cool! 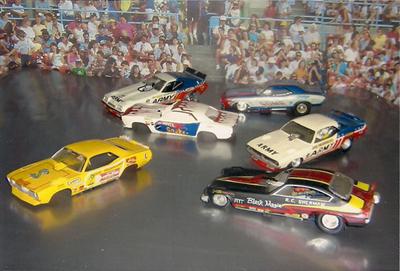 On to yet another form of art: the plastic model. Me, I built a ton of Revell and Monogram kits when I was a kid, but, of course, there's no way a model company could ever make a 1/24th replica of every fan's particular favorite, so many fans have gotten very creative in adapting existing model kits to create their own favorites. Decal manufacturers such as Slixx have done boffo box-office biz in creating new decal sheets for tons of current or nostalgia cars, but some people, like Insider regular "Chicago Jon" Hoffman, like to do it more old-school, with paint and cement and spare pieces from this and that. 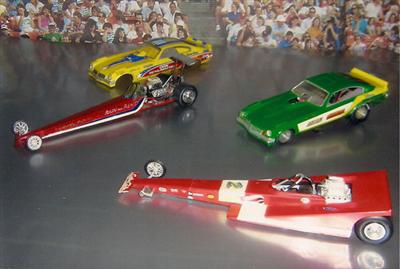 "We all built whatever the companies churned out," he wrote, "whether they were good (the '71 Mickey Thompson Mustang by Johan), bad (Shirley's '73 Satellite; shame on you, MPC), or the ridiculous (Revell's interpretation of 'Jungle's' Camaro from '71; what were they smoking?). For every actual car made, I probably had five of what I attempted to fabricate myself."

Through craftsmanship, a steady paint hand, some ingenuity, and plenty of patience, he's been able to create his own small-scale versions of Kosty Ivanoff's Boston Shaker, Prudhomme's Hot Wheels wedge, Johnny White's Houston Hustler Mustang, the Gapp & Roush Pinto, the R.C. Sherman-piloted Black Magic Vega, and a trio of Prudhomme's early Barracudas. You can see the front-fender bubbles on some of the cars that were not part of the original kits but painstakingly created, carefully whittled pieces of a particular grade of Styrofoam that could only be attached with a dab of paint as he quickly found out that model glue melts Styrofoam! 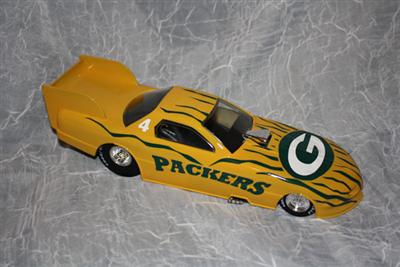 If you're a photographer whose stalking grounds include Great Lakes Dragaway in Union Grove, Wis., it's a pretty good bet that when it comes to passes on the football field rather than on the dragstrip, your leanings are toward the Pack, the legendary Green Bay Packers, and that's obviously the case with Mark Bruederle, who sent his collection of Packer-themed NHRA race cars for me to ogle, all sporting the green and gold and the name of number of former Packers quarterback Brett Favre.

"Please excuse the #4 and Favre name on them; these were painted when he was still a 'hero' in cheeseheads' eyes," wrote Mark's wife, Laura, without even the slightest hint of venom dripping from her letters. "Good news, though, those are vinyl letters and numbers, and these cars have never been displayed, so a sharp knife would be perfect!" 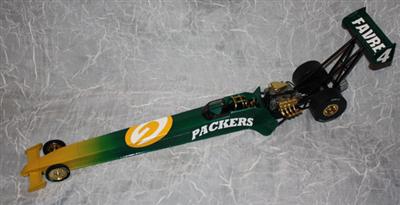 These are really great-looking pieces, and, hey, if the New York Yankees can sponsor a Top Fueler, why not the world champion Green Bay Packers? Hike!

OK, that was kinda fun, and I'm sure that now I will be besieged with photos of everyone else's great art projects and nifty models. I certainly admire the hard work, forethought, and artistry. Again, I'm no artist, but it's easy for me to draw a conclusion about your passion for our great sport. Thanks for sharing.