Throughout the course of this growing rear-engine Funny Car thread, I’ve received several requests for more information on the Night Stalker Mustang that was the unlikely first Funny Car for the man who would become the king of the class, John Force. After all, a chain-driven sidewinder hardly sounds like a good place to launch a 15-championship career, right?

Most of you probably know that the car was originally built by the late, great Jack Chrisman and have heard what an awful car it was and about how the car threw chain links at Irwindale Raceway starter Larry Sutton, who not so politely disinvited Force back for subsequent efforts.

All true certainly, but let’s dig deeper, shall we?

That Chrisman built a sidewinder Funny Car does not require a huge leap in logic as Chrisman had enjoyed great success with Chuck Jones’ Sidewinder I and II dragsters in the late 1950s and early 1960s. The attraction to the concept is easy to see: The right-rotating engine torque buries the rear tires for better traction and straighter leaves (even Don Garlits took a stab at it with Swamp Rat 27 a decade later).

Working off a sketch from Chrisman, Woody Gilmore built the Mach I Funny Car at his famed Race Car Engineering emporium, turning Chrisman's imagineering into structurally safe reality. The chassis was actually modular in that four pins held the front and back halves together, allowing for a completed engine/driveline change (if you had a spare rear assembly) in just a few minutes.

According to an article in the November 1971 issue of Hot Rod, Chrisman seized on the Hy-Vo chain technology developed by Borg-Warner's Morse Chain division that was being used by General Motors in its front-wheel-drive Olds Toronados and Cadillac Eldorados and had Morse build him a special-application chain 2 1/2 inches wide with a 22,000-pound capacity to withstand the SOHC 427 Ford engine's estimated 1,500 horsepower and 8,000 rpm. Morse also was kind enough to provide Chrisman with a cheat sheet of sprocket sizes to determine final gearing. The front sprocket, driven off the engine's output shaft, was made of 4130 chrome moly steel; the back sprocket, made from an aluminum blank, was mated to a solid-tune Hi-Tuff alloy rear axle. An extra benefit is the elimination of the rear-end weight, which Chrisman estimated at 250 pounds.

"The car is like a giant go-kart or slot racer -- no difference,” explained Chrisman in the article. “What we have here is a motor, a clutch, a chain, and 'live' rear axle; and no driveshaft, two-speed, or rear-end problems."

To the best of my research, which includes Tom Madigan’s exhaustive new Chrisman family biography, Chrisman never drove the car but sold it to aspiring Southern California racer Roy Mehus, who owned a motorcycle dealership, Yamaha of Buena Park. (Somewhere along the line, Mehus’ name began being misspelled/misreported as Mehue or Mahue, but Mehus is correct.)

Insider reader Bill Sampson, who was a neighbor of Mehus, tells me that Mehus had received a considerable inheritance after his grandparents' death and decided to go Funny Car racing. “He bought the car from Chrisman and raced it for a short period of time,” wrote Sampson. “As with the other rear-engine Funny Cars, the handling was unstable, and I believe the car crashed at Orange County Int'l Raceway; I just don't remember who was driving the car at the time.”

Steve Reyes was on hand for the OCIR crash in 1971, which he reports happened on driver Bill Finacle's second pass in the car. The damage was repaired, and he ran the car again; that much is not in question. But here’s where it gets a bit sticky, as you will read later in the column.

Anyway, Mehus was a friend of Force’s when both attended Bell Gardens High School. Years later, Mehus opened the motorcycle dealership, in front of which he sometimes parked the Funny Car. Force saw it, stopped to chat, and the next thing he knew, Mehus asked Force if he wanted to drive it.

True to his legend, Force was indeed a truck driver at the time, and he had a fuel altered – the Beaver Hunter -- that he could barely get to run, but he wanted to be a Funny Car driver bad enough that he jumped at the chance to become involved with the car. Force doesn’t recall that he even paid for it at the time, but he and good pal Bob Fisher loaded up the beast and took it home and dubbed it Night Stalker, after the 1972 movie of the same name. Mehus remained involved with the car, and the name of his Yamaha dealership was a regular on the flanks of Force’s cars for the next decade.

Force’s younger brother, Louie, was the crew chief, and Mehus worked on the car with them. Rick Weeda, who owned a car dealership in Downey, Calif., was listed as a partner on the car (at least initially) and bought fuel and some parts for the fledgling team.

(Intriguing sidenote: Force says that the Night Stalker may not, in fact, have been his true first Funny Car ride because he tried to make a couple of laps in an ex-Steve Bovan car that Weeda had purchased at an auction, but they had mechanical issues with the transmission. He’s “pretty sure” it was before the Night Stalker.)

Force, who borrowed a helmet and firesuit from cousin Dave Condit, however, remembers well the first outing with the Night Stalker. 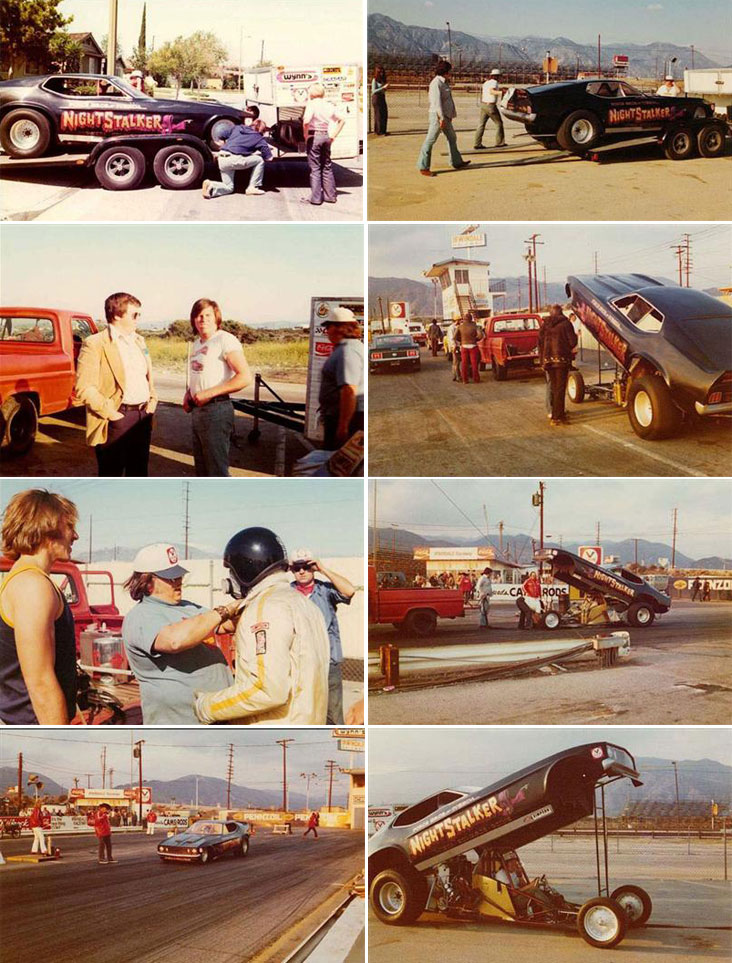 “It took me half a day just to get suited up, then it wouldn’t even start,” he said. “We were a mess. We didn’t even have a spare spark plug. We finally got it going and made one pass, a 7.70 or 7.80 at 182 mph, but the chain kept coming apart because there was no idler pulley, so when you would do a burnout and then lift, the chain would start to unravel and throw links off. On one of my next runs, the chain broke and hit Sutton, and they threw me out.

“It was evil,” Force recalled. “Because your head was on the windshield, it would come around before you realized what happened; you didn’t have anything in front of you to guide you. It looks like it has a front end, but sitting in the car, you couldn’t hardly see it. I never even got licensed in it. I sold it to some sand racer guy. I wish I had that car back. It was awesome."

To that end, Force would very much love to have the car back and has staff members scouring the Internet and friends making phone calls on his behalf.

I came across a message-board posting from fuel car owner/tuner Virgil Hartman, who said that he bought the car from a friend of his neighbor for $600, sold the removable back half of the car for the same amount, then converted the rest of the chassis to a standard Funny Car, which he ran with a carbureted econo dragster engine. He ran it only five times before he got an offer from a Midwest buyer to sell the car, which he did for “a healthy profit. The body came up for sale last summer for $2,000, and it still had the Night Stalker paint job. It was in Kansas or Missouri or thereabouts. The short version: The chassis and running gear are separated, modified, and gone; the body is available.”

If anyone knows anything more about the whereabouts of any of the parts and pieces, drop me a line.

OK, here’s where the Mehus/Force connection gets weird. I’ll call this the Case of the Curious Cop Car.

Tom West, one of the many wonderful photographers of that era, took the photo at right of a car that clearly is the same Mustang sporting a police car paint scheme. DragList reports that Force first drove the car as the Night Stalker and later as a car called Cop Patrol; this photo accompanies the DragList listing on the car, so all of this seemed to line up. The fact that Force’s older brother, Walker, was an L.A. County sheriff and that Force, too, dreamed of a career in law enforcement (before he failed the ink-blot test, according to him) gave further credence to the story.

I asked West for a large-format version of the photo, which he promptly and graciously provided. I enlarged it and was surprised to see Mehus’ name written (in shoe polish, it seems) on the left front fender. However, there are two more shoe-polished words on the roof, and if you squint your eyes just enough, you can convince yourself that the second word is Force. West swears it says Brute Force, but the photo doesn’t hold together well enough for me to see that when I blow it up.

But I’d heard that Force only had driven the car a few times, and always only at Irwindale, and this photo clearly was taken at OCIR. Also, the helmet in this photo, although somewhat obscured, compares favorably to a Reyes photo of Mehus in the cockpit before his ill-fated pass, especially the circular design on the side, as well as the design of the Nomex face mask. Force also said (and photos I have back this up) that he didn’t even have enough money to get his helmet lettered.

And the name on the “door” reads Dragway Patrol, not Cop Patrol. Hmmmm. However, West told me that he had printed this photo and had Bill Holland take it to Force in Sonoma about a dozen years ago, and Force at the time told Holland that it was him driving the car. Or maybe he meant it was his first car. No one’s sure.

I’ve spoken to Force many times about this car and had originally planned to write this column without trying to reach him while he’s neck deep in all kinds of secretive plans for next year, but this all got way too confusing, so I called him. He called me back almost right away, excited to be talking about something other than rumors and questions about sponsors and Courtney and Top Fuel.

First things first: Force says emphatically that’s not him in the Dragway Patrol. He insisted that he drove the car only as the Night Stalker and only at Irwindale and that he sold the car to a sand racer, still painted in Night Stalker colors (which would appear to be backed up by Hartman's claim above). Then I came upon the photo at right, which clearly shows the Night Stalker in fact running at OCIR. I don’t fault Force for not having a perfect memory of 40 years ago, but it does make me wonder.

Force has had only occasional contact with Mehus in the years since but knew where he lived (out of state). As a follow-up, I thought he could help solve the Case of the Curious Cop Car. An Internet search in that area yielded quite a few returns on the unusual surname. I called all nine numbers; eight were disconnected, and I left a voice mail on the ninth. If I hear back, I’ll let you know. [Update: 12/16/11: Mystery solved. Case closed.]