In the Snake Pit 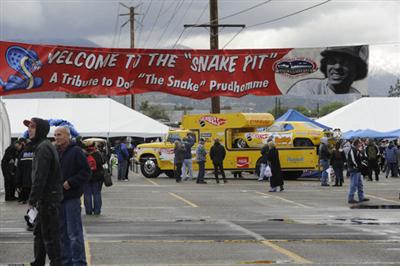 Though we didn't completely dodge the rain bullet at the Winternationals, we got away with pretty much just a grazing wound from losing Friday, which only gave folks like me time to better explore the Snake Pit, the collection of Don Prudhomme's race cars that was on display to honor "the Snake," who not only served as the event's grand marshal but also took part in a fun Track Walk with fans Sunday morning and had a section of the Pomona grandstands named in his honor. 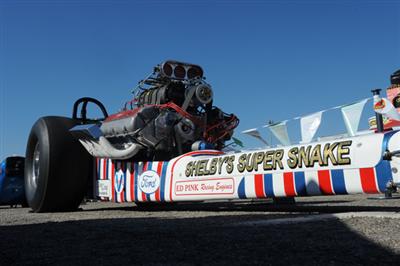 While the Snake Pit included many of the cars that we all know are in Prudhomme's collection – the white and yellow Barracudas (the latter still strapped to the back of the Dodge ramp truck), the '74 Army Vega, the '78 Army Arrow, the '82 Pepsi Challenger Trans Am, the '89 Skoal Bandit Trans Am – the display was rounded out by other famous cars with which Prudhomme is associated, including the reproduction of the 1965 Winternationals-winning Hawaiian dragster and the Shelby Super Snake dragster, both of which Prudhomme drove, plus two of former partner Tom McEwen's cars, longtime pal Tommy Ivo's Barnstormer, and many more. The Howard Cam Rattler, Art Chrisman's Hustler VI, the Warren-Coburn-Miller front-engine car, Twin Bear, and Yeakel Plymouth dragsters were among the others out to wow the fans as NHRA kicked off its 60th Anniversary season.

Prudhomme and Roland Leong signed autographs for a flock of fans, and former "Snake" crew chief Bob Brandt was also a very visible part of the scene.

Prudhomme owns the blue McEwen/Hot Wheels Duster, but "the 'Goose's" '78 Corvette was also there, and I got to meet its current owner, Don Trasin, who told me that he was inspired to bring it for the display after reading some of my columns here. I'm honored. What was really cool about having that car there was that it was displayed alongside the Army Arrow in a "rematch" of that memorable 1978 U.S. Nationals Funny Car final that McEwen won shortly after the death of his young son, Jamie. (Sure, they were in "the wrong lanes" as far as positioning went, with the Corvette displayed to the right of the Arrow, but only a nitpicker like me would point that out.)

As you can imagine, it took quite a bit of logistics to get all of "Snake's" hot rods up from his Vista, Calif., shop. Other than the yellow 'Cuda, which had its own built-in transportation, everything else had to be trailered to Pomona, no small feat in itself.

The beautifully restored vintage machines usually fill the cavernous inside of the Prudhomme Racing shop, but after they left for the weekend, the place was looking kinda empty, as evidenced by this photo that Prudhomme's right-hand man Skip Allum sent me Thursday. Compare that to the photo below that we shot two years ago when ND Photo Editor Teresa Long and I spent a day with "the Snake" and his cars for a memorable column that I wrote back then [read All 'The Snake's' Horses].

That was one of the great days of my life as we not only got to spend the day with "the Snake" but also to actually lay hands on those pristine machines and take a ride with him in the fabled ramp truck.

The Snake Pit in Pomona was a worthy tribute to the man who gave us so many memories there throughout the years, and, in an unprecedented honor at an NHRA-owned track, NHRA President Tom Compton announced during Sunday's pre-race activity that a section of the Pomona grandstands would be named in his honor. We've named towers (the Parks Tower in Indy) and media centers in honor of individuals but never a grandstand, and Prudhomme clearly was taken aback by the gesture. "This is really cool," said the king of cool.

The weather forecast all weekend was pretty lousy, and we had all heard that the Arctic Express weather front was barreling our way with the promise of super-cold weather and even a vague threat of snow at pretty low elevations.

I had joked with Teresa that if we actually got snow, I wanted to re-create the famous 1978 Winternationals snow-on-the-starting-line photo. Of course, no one thought that we would until Teresa was talking to a racer in the pits -- who will go unnamed other than to say he is the tuner/driver of an independent Funny Car – who got it in his head that Mother Nature would engineer a snowstorm for us, guaranteeing us 2 inches of snow at neighboring Brackett Field Saturday.

"When I heard about the predicted low snow levels, I actually had the same thought," he wrote her back. "Unfortunately, I didn't make plans to attend this year's event and will thereby blow what surely amounts to this second opportunity of my lifetime. Therefore, I hereby authorize Phil to stand in for [me], but for the sake of authenticity, please ask [Phil] not to shave for the occasion, to wear a hat, and to assume the same awkward stance required back then to help preserve [my] way-inappropriate footwear."

Well, it never snowed, but we did get a 10-minute hailstorm that morning, which was good enough reason for me to traipse out to the starting line (with hail pelting my ears) to get some shots, and our own Marc Gewertz wasn't far behind to document me being there. The pose is kinda close, but obviously there's not near enough white stuff on the ground; you have to look hard to see the hail [here's a better photo I took]. I did have a hat and inappropriate footwear, but I did shave that morning. Close enough for now, but my photo will never replace the original classic.

OK, that's it for today. See you later this week. Thanks to everyone who stopped me in the Snake Pit and elsewhere on the grounds to express their love for the column. It means a lot to me and, just as importantly, impresses the hell out of anyone walking with me.