After somewhat reluctantly (yet honor bound to do so) publishing mixed reviews of the replica Hot Wheels Duster Funny Car in last Friday’s column, I was glad to see an outpouring of support for the project from fans. Though the red “Mongoose” Funny Car is not – nor was it intended to be – a historically accurate reproduction, it nonetheless has some obvious flaws when compared to photos of the original, but those imperfections are being easily overlooked by the fan faithful.

“Hats off to the ‘Snake’ crew,” lauded Bill Whisenant. “The advantage of the photos is that anyone can now see the difference between the original platform and what appears to be a nostalgia-legal flopper. Having briefly owned the Garcia Outta Site Funny Car and having opportunities to work on more contemporary BB and AA cars, the differences are readily apparent to me, but the chance to see them side by side electronically is unique and great opportunity for a student of the sport. We are attempting to restore the Top Fuel Bike we won the AMA title with in 1982 and are having a heck of a time finding a supercharger for it, even though we have nearly all the rest of the parts. I can empathize with the 'Snake' crew and commend them for their efforts to preserve a truly American type of racing!”

Added Ken G., “The car looks great and was never posted as the original car. It is a great expense to do these projects, and I think they are awesome for spending the time and money to do it."

And Gary Crumrine: “Lighten up guys. … The car/truck combo is meant to rekindle a warm spot in the memories of all of us that saw these amazing machines when we were growing up, and believe me, I don’t care. Kudos to ‘Snake’ for taking the time to put these together. There are so many kids out there growing up today who have never seen where the sport has come from, and these two barnstormer-era outfits are right there in the middle. If it were not for these two setups, the history and memories would die with our generation. THAT would be a sad commentary. The bottom line is they are COOL.

“I think the restored rig is nicer than the original … of course, nobody is living in it and burning down the road to the next gig for months on end, either.” 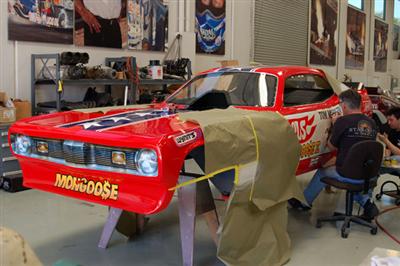 As to how the red Funny Car was prepared, I got the following report from Michael Rabenau, who was there when it was being lettered and confirms the thoughts I shared here last week. “The red Mattel circle under the Hot Wheels logo was repainted black and the light blue,” he wrote. “The Tom McEwen lettering that was on the blue car was being repainted black to match the red car. They masked off the white section of the blue car and repainted the body red. Since the blue car wasn't original anyway, it was no great loss."

You can check out Rabenau’s photos in the gallery at right, which also includes a photo of the car that Rabenau thinks should have been used for this project, the Samualson & Elliott Hustlers '70 Plymouth Duster out of Prior Lake, Minn. Although the chassis is more period correct than the car used, DragList says that the chassis is a Ken Cox product as opposed to the Buttera original. This car runs as a BB/FC on the nostalgia circuit.

I’m not sure why I zoned out and reported that I didn’t know the whereabouts of the black Snake III 'Cuda, but Jeff Mittendorf, Dave Ferrin, Bobby Aspinall, Gary Newgord, and others quickly reminded me that though the sinister black car did become “Snake’s” Carefree Gum 'Cuda in 1973 (painted yellow), it also was pressed back into service in early 1974 after Prudhomme’s short experiment with the tricks-laden laydown Vega, which was the first U.S. Army flopper.

Prudhomme shelved the Vega after just two races -- the AHRA and NHRA Winternationals -- and went back to the trusty plain Jane 'Cuda and won the Gatornationals and Indy again and was runner-up at the Springnationals to Gene Snow and, ultimately, in the world-championship race to Shirl Greer. The 'Cuda gave way to the famed Monza beginning in the 1975 season. The Army 'Cuda is now in Don Garlits’ Museum of Drag Racing in Florida; ergo, that’s the current resting place of the black 'Cuda.

Veteran drag photog Bob McClurg wrote a piece about this car – titled "The ’Cuda That Wouldn’t Quit" -- for the National Street Machine Club website that can be found here. Wrote McClurg, "Some race cars are mysteriously 'born' to be champions. Such was the case with Don 'the Snake' Prudhomme’s Lil' John Buttera-built ’72 Barracuda Funny Car, also known as Snake III. Straight out of the gate, it became apparent to everyone involved this was one machine born to be a winner."

On a side note, Peter Howell was at famed SoCal race car paint emporium Paint-N-Place when the Snake II 'Cuda – which was the second yellow 'Cuda built by Buttera and which also famously flew through the lights in Seattle – was brought in by Prudhomme for restoration and shared the difficulty of restoring an original, warts and all. 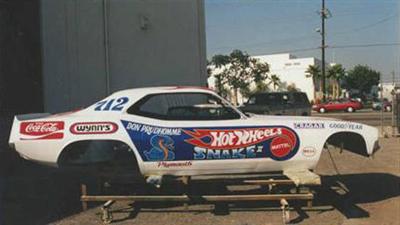 “The [paint] when delivered from Don, was all faded, where the red flames looked orange. When I showed up there, Kenny [Youngblood] was already masking the front to airbrush the front grille/headlights. When Kenny completed the front (it looked great), the before photos arrived at the shop – oops -- apparently, this flopper had an issue with a fire after a run. Since it was near the end of the season, the front was repaired with the next-year grille design. Kenny had me remove his fresh airbrush job, then repaint it with the other (next-year) grille, so the rear of the flopper has an earlier taillight style from the front. The white paint, the red flames, and Hot Wheels background was laid on at the Paint-N-Place. All other stuff was hand-done by Kenny … no decals.”

Aspinall had a question about McEwen's second Duster. “I always assumed that McEwen got a lot more mileage out of his blue Duster. Didn't it become his Carefree Gum car, then his second U.S. Navy car campaigned by Russell Long (or John Collins?)?”

Although I’m sure I remember Long driving for McEwen somewhere in 1973-74, the two-car team was officially formed in mid-1974, with Collins at the wheel. After the Carefree Gum deal went away at the end of 1973, McEwen replaced Carefree with English Leather and the Navy, and he and crew chief Bob Kerns had a newer Duster built and put the Carefree car on the block. McEwen crashed the new car at the Winternationals when a nasty fire engulfed the chutes and sent him careening off the end of Parker Avenue. The car was heavily damaged, so they quickly took the Carefree car off the market, repainted it, and carried on.

The old car still was running pretty good when McEwen’s newest new car arrived later that year, and, hoping to recoup some of the money he’d lost in Pomona, he hired Collins to help him fulfill match race dates. Collins was an accomplished shoe, having proven himself in John Bateman’s Atlas Oil Tool Special, and could tune and wrench, so McEwen got a bonus. (In photos, you can easily tell the difference between the two identically painted Dusters. In addition to the permanent number -- 713 for McEwen, 742 for Collins; Long was 751 -- McEwen’s Duster had louvers at the rear of the side windows and on the back window.)

That second car paid off handsomely for McEwen in 1975 when his planned Navy stunt to “race” against a steam-catapult-launched F-14 Tomcat at Patuxent River Naval Air Station on Chesapeake Bay in Maryland for a Hot Rod magazine cover story almost was derailed when his car was struck in the shutdown area by another team’s crew vehicle at U.S. 30 Dragway four days before the big show, mangling the front of his chassis. McEwen was able to reach Collins’ team, which was in Cleveland after a match race at Dragway 42, and have it bring the second car for the photo shoot.

It wasn’t really a race, per se, as the jet was timed at Pax River over a 258-foot course (the point where the jet’s front wheel left the ground), and the Duster, with Collins at the wheel, covered the same course at nearby Capitol Raceway. Collins’ best pass was a 1.97 at 118.20 while the jet, which weighed more than 25 times as much as the flopper, zoomed to a 1.76 at 175.86 mph, thanks to its catapult assist. I remember a line from that Hot Rod story where the authorsized up the competition beforehand by saying something like, “It was clear that McEwen is racing the catapult and not the jet.”

Collins drove McEwen’s second Duster for three seasons and through a couple of different paint schemes, and Collins later bought the Dusters from McEwen, a fact confirmed by Chris Horn, who was a nitro crewmember during that time and remembers well what became of one of the red Dusters.

“I believe the cars were sold to Collins and one painted in Pioneer Stereo colors, the other as a spare,” he said. “Collins raced out of Keith Black’s shop that had a row of garages in the back with Gary Beck, Jim Dunn, Dennis Taylor (Braskett & Taylor), and others. Jeb Allen took Collins’ and Beck's garage spaces after winning the championship in late 1981. I went to work for Jeb and Lance Larsen preparing a borrowed car from Connie Kalitta to send to Australia for a winter tour Down Under.

“Space was needed, and the red Carefree Gum body, along with parts of Collins’ crashed Trans Am, were loaded onto a flatbed. Lance and I dropped it all off at a garbage transfer station in Torrance [Calif.]. I did take the chute levers off the Duster; they have been in my toolbox for decades as a reminder of the day when Lance and I took the Hot Wheels car on its last ride.”

And that’s a wrap for this column and this week. Thanks again for sharing your thoughts, memories, and photos. See ya next week.