At this time next week, I'll be at one of my favorite places in the drag racing world, Old Bridge Township Raceway Park in Englishtown for the annual Summernationals SuperNationals. (Still struggle with that one, and don't even get me started on SuperNationals.) As usual on my race weekends, due to travel, I'll have only one column next week for you (and because Monday is Memorial Day, it might not be until Wednesday), then head off for the world where "the other side sucks" (no matter which side you’re on), where magically crazy things happen. Jim Liberman won his only NHRA Funny Car title there in 1975, the same year Jim Bucher won Top Fuel with his Chevy Rat motor. Speaking of rats, how about what happened to the swampy one there in 1986? Maybe this year I'll even see the magic rat drive his sleek machine over the Jersey state line. Could happen.

Today's column actually begins officially (now) not with rats but with a snake and a story I forgot to share from Don Prudhomme’s surprise birthday party at the Wally Parks NHRA Motorsports Museum. It came courtesy of master illustrator/artist Kenny Youngblood, one of those who offered his thoughts to the group after the main roast.

Youngblood, whose paint and airbrush work adorned many a Funny Car in the 1970s, had the honor of creating the now-iconic paint scheme for Prudhomme’s vaunted Army Monza, but he had a dilemma when it came to the famous logo that “the Snake” had been using. The graphic was going on the hood and flanks, and the old snake just didn’t sit right with Youngblood.

“We were working on the car with Bob Kachler; there was only one bone of contention, which was the snake graphic,” he remembered. “On the Hot Wheels car, the snake was powder blue with polka dots. So I came up with this bad-ass Army theme and thinking that I couldn’t put that [polka-dotted] snake on there. So I came up with the stars-and-stripes snake.

“Kachler sent it to Prudhomme, but I never heard back from him. I finally called him and asked if he’d seen it. He said, ‘Yeah, man, but people really like that polka-dotted snake.’ He didn’t want to go for it. I ended up painting the car and lettering it at my house. The last thing was the snake, and I told him, ‘Don, we are going to put this stars-and-stripes snake on the car or I’m done.’ He told me OK, but if nobody liked it, it was my fault. I put it on, and it was a big hit. A couple of years later, we did the Pepsi Challenger car and wanted to update the snake to the flat graphic. I designed it and sent it to him, and he starts off with, ‘I dunno, man,’ then paused and said, ‘Y’know, we had this same conversation a couple of years ago. Just do what you want to do.’ ” So he did.

Youngblood is well-known and highly respected for his work in bringing the dragstrip to canvas, but he also drove for a short time and even lined up against Prudhomme one time in 1967 at Fremont Dragstrip.

“In my very short driving career, I actually raced ‘the Snake’ once with my injected dragster,” he told the audience at the Prudhomme party. “It was at Fremont at a PDA race. We were in line, and Lou Baney comes over and says, ‘Hey, Kenny, can we cut in front of you?’ I said sure, so they put the Shelby Super Snake in front of me, and I ended up racing him on a qualifying pass. I’m at Fremont racing ‘the Snake,’ and I’m all pumped up. The light comes on, and I leave on him. ‘God, I just left on “the Snake!” ’ but he didn’t care because it was just a qualifying run. At about 60 feet, it was like the fricking motor fell out of my car as he smokes by me to set low e.t.”

While I was looking for photos to accompany the note on the Prudhomme logos, I came across these pretty funny images on the Web of a fan who took his love of Prudhomme and the Army cars to the nth degree by painting his street car in the very distinctive colors.

It’s a Camaro, of course, which none of “the Snake’s” Army cars were (they were, in order, Vega, Barracuda, Monza, Arrow, and Horizon), but it’s still pretty cool. I couldn’t find the owner’s name (I’m sure he will find me), but he did a great job of mimicking the distinctive paint scheme, a design that I would have no problem arguing is the most distinct and famous in drag racing history. 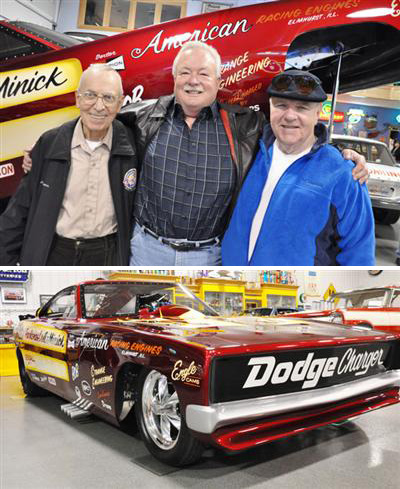 I've also been holding on to these pics for a couple of weeks, waiting for place to show them off. They landed in my email box the Friday I was headed to Atlanta, and even a quick view on the magical iPhone was enough to get my juices flowing.

They are from Dennis Mothershed, who sent them at the request of Austin and Lisa Coil. Funny Car's all-time winningest crew chief has kept a pretty low profile since leaving John Force Racing at the end of last season, but he hasn’t been idle.

What you see at right is the reunification of the fabled trio of John Farkonas, Coil, and Pat Minick, the original Chi-Town Hustler team, who gathered May 4 at a private museum in the Midwest to view their restored P&G-built '69 Dodge Charger. When it was introduced, the offset chassis was one of the most groundbreaking designs of its time. The track-long burnouts and high-win ratio instantly made the team a crowd favorite. The three had not been together since their joint induction into the International Drag Racing Hall of Fame at the Don Garlits Museum of Drag Racing in 1989.

After reporting on the death of Dick Rosberg, I was pleased to hear from David Beebe. No, not Funny Car-driving Dave Beebe, but his nephew David Beebe. Yeah, I know. The younger Beebe had written to ask for more information on Rosberg, who had driven for his other uncle, Tim, in the Fighting Irish Funny Car.

And it turns out that the Beebe Bros. we all know from their wondrous quarter-mile exploits throughout the years aren’t the only Beebe brothers.

"Yes, a family of nine children," he said. "As you might imagine, Thanksgiving gatherings were … eventful. We lost my grandparents a few years ago. I’m sure it’s been longer than I think; time flies. Other than that, the whole family is alive and healthy. All of them are natural engineers. They are all very humble, and if you saw them on the street, you would have no clue of the contribution they made to the sport of drag racing in its early days."

He also spoke of the sad feeling we all have about the mounting losses our sport has suffered. "I know more losses are coming," he acknowledged. "They always have the same impact. I rewind all the way back to Lions or Carlsbad or Irwindale or OCIR or Riverside or Pomona or Fremont or Phoenix or Woodburn, where did I see (fill in the name of lost hero) last? I was just a kid, and they almost never remember me, but I sure do remember them."

Earlier this week, we had delved into the origin of the nicknames bestowed upon Rosberg ("Whale Belly") and Tim Beebe ("Chops") and even Tim's then-wife, Suzy ("Zerk"), but I never knew that the senior Dave had a nickname: "King." Now, I know that every single one of you out there is spitting out your coffee or otherwise rolling your eyes and invoking Jerry Ruth's name.

"Dave’s nickname is from pure ego," reported younger Dave. "Dave was 'The King' of everybody! He was well-known for walking through the staging lanes and trying to get into his opponents' head. It wasn’t just racing the track for him. Dave still fields an e.t. car that his son Daniel drives. He has mellowed quite a bit."

Speaking of nicknames, I need to direct you (once again) to the Ewald brothers' We Did It For Love website to view the impressive list of historic driver nicknames that they've assembled. It's definitely very cool: www.wdifl.com/driver-nicknames.html.

OK, that's it. Enjoy your weekend, and take time Monday to remember the heroic and the fallen, even if they never made a pass down the track.