If Michael J. Fox can do it, so can we, so we’re going back to the future … er, back to the rear in the future – whatever. I should have known better than to call it Case Closed on the rear-engine Funny Car thread, cuz as soon as I did, here comes another barrage of interesting stuff devoted to one of drag racing’s short-lived, least-followed trends.

Joe Faraci wrote to tell me of his enjoyment of the thread (and to ask the obvious question, “Who in their right mind would drive a rear-engine Vega panel?”) and had another question.

“Way back in September 1971 when Car Craft reported about Chrisman’s sidewinder in the Elapsed Times column in their magazine, they had a picture of it and a small caption. They mentioned that if it was successful, there’s a hot Armenian and fireman next in line. I assume the fireman is [Jim] Dunn, but who would have been the ‘hot Armenian’? I can only think John Mazmanian. Who else could it have been? Was Maz thinking of a rear-engined car? Or was Car Craft just thinking out loud? Think anyone would know? It’s just something that has bugged me for only 40 years.”

I’d say your detective skills are top-notch, Joe. Obviously, despite the lack of success for Chrisman’s car, Dunn went on to build one anyway (with much more success), but as to “Big John” fielding one, it’s anyone’s guess. He certainly was of Armenian descent and certainly had a no-expenses-spared way of looking at racing. And obviously, if the rear-engine Funny Car did for the class what rear-engine dragsters did for Top Fuel, we’d have seen a lot more of them from a lot of people. But still, anyone know if "Big John" was serious?

Because I'm all about answers, Joe wants to know who would want to drive a rear-engine Vega panel Funny Car. How about Pat Parkhurst, who took Dave Bowman’s quasi-successful California Stud fuel burner to the sand after redubbing it Quick Delivery? Thanks to Tony Barraza, a talented artist who once worked here at NHRA in the Corporate Art Department and now owns Tony Barazza Designworks, for sending it; he used to crew on the car. Kudos also to TB (@TBDesignworks) for submitting this info by Twitter (a DI first!).

Who else would drive a rear-engine Vega panel Funny Car? How about Tom Gambardella? He sent this image of his rear-engine Funny Car, one of many built in the mid-1970s by Umbro Engineering. The cars were built to 5/8-scale and powered by a 900cc Kawasaki (or Honda) engine with a chain-drive setup similar to Jack Chrisman’s Mustang.

The company, based in New Rochelle, N.Y., sold them for just $900 yet promised 11-second e.t.s (as well as wheelies and burnouts) out of the cars. “My car ran low 11s at around 120 mph,” reported Gambardella. “In regard to wheelies, we were testing it last year, and it carried the wheels a good foot and a half in the air for 15 feet and bent the wheelie bar! Without the wheelie bar, it would have flipped right over just like the Hindsight Duster. It really loads the rear tire hard. It does do burnouts, but you have to hold the rear of the body just like an old Pro Stock car as there are no front brakes."

These cars would seem to be predecessors to NHRA’s own Jr. Dragsters. I’m not sure that this kind of car is even legal now, but Gambardella, who recently restored his, says they were in 1977 and that he ran his at Old Bridge Township Raceway Park in Englishtown.

Mark Williams was kind enough to dig back into his files to find the above image, showing the chassis of the rear-engine Vega panel Funny Car that he built for Ed Mullen, and the image of the completed car in action (with canards!) that graced the back of his 1974 catalog. He also provided the basic worksheet for the project, which set the wheelbase at 130 inches, a roll-cage design to accommodate a 6-foot-tall driver, and a completed date of September 1973. There's probably a whole other thread that could be created (don't tempt me) for Funny Cars with canards. I'm not really sure how well they worked, but I recall seeing quite a few cars sporting them in the early 1970s, including some conventionally bodied and chassised cars in dire need of downforce and directional stablility. I know there's a bunch of you old '70s Funny Car racers out there in the Insider Nation, so drop me a line. Y'know, just in case I ever do decide to go down that road.

Funny Car historian Danny White passed along the Rich Carlson photo at right of the Lil Stinker Corvair from Bellingham, Wash. Like all good Corvairs (unless you ask Ralph Nader), the engine is in the back. I asked “Flyin’ Phil” Elliott, the Great Northwest’s premier historian, for info on the car, and he passed along an early 1967 Drag News article that described the car as a ’64 Corvair with an injected 426 wedge in the back seat. The car, owned by Dave Boyd, was classed as a C/Fuel dragster (as was common with cars of that breed at the time, including Gene Snow’s famed Rambunctious Dart) and was to be driven in 1967 by Glenn Scott and with  W.L. “Dub” Queen as crew chief; it was reported that Queen would be experimenting with hydrazine in the new season, hoping to improve on driver Dave Boyd’s 1966 bests of 10.00 and 141 mph by running low nines at speeds of 170. Doesn’t appear those plans came together, as there’s no further record available on the car. “I saw it run a couple times, and it never really worked the bugs out,” said Elliott. “We never saw it in the configuration described.” Also worth noting is that the article called the car Lil Stinger, but Elliott also passed on a few other shots of the car where a skunk is clearly visible on the front fender, making me believe it was Stinker.

Elliott also passed along a link to this Mike Sopko photo that he found online, showing the Slack & Hallman rear-engine Mustang, a creature that neither of us knew existed and is also not part of the DragList database. A Barracuda and Charger are listed for the team, but no Mustang, and certainly no rear-engine Mustang! Harry Hallman was the driver of the injected Ford, shown making a pass at U.S. 30 Dragstrip on Aug. 13, 1972.

And speaking of rear-engine Mustangs, I can now attach a credit (and a story) to the photo I ran recently showing the most famous of them all – John Force’s Night Stalker – at Orange County Int’l Raceway. The shot of Force leaving the line at OCIR is one of only two professional photos of the car on track of which I’m aware; the other, shot by Dave Kommel of Auto Imagery and featured in a 2004 Photo of the Week gallery on NHRA.com, shows that car at Irwindale Raceway.

Anyway, I heard this week from Jefferson Dykes, who claimed credit for the photo and provided enough anecdotal evidence to back that up and shared the story of how it came to be.

Dykes (“A Force fan before it was cool to be a Force fan,” he proudly proclaims) pinpoints the pass as an early licensing run at OCIR’s Manufacturers Meet in November 1974, and he remembers the circumstances well.

“By 1974, we all knew that rear-engine cars didn’t work worth a damn, so when it came up to the line, I watched [some of the other photographers] walk away to have a cigarette by the tower. I was maybe 100 feet downtrack and didn’t take a photo of the burnout but zoomed in as the car was staging and pushed the button when he launched. I don’t know how well it ran; I assume it went 30 feet and broke like it always did.”

Dykes continued to shoot photos and was the track photographer at Seattle Int’l Raceway in the late 1990s; he got on the other side of the lens when he built a Datsun 280ZX-bodied nostalgia BB/FC in 2006, which was called Photo Op and driven with great success by Randy Parker (website). 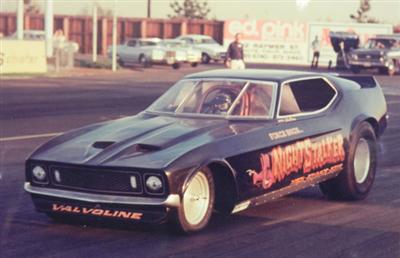 I've only previously shown you here the black and white version of the Force Night Stalker at OCIR because that's all I ever had (it was a digital scan, which explains why there was no photo credit attached to the image). I wanted to show you the color version, but Dykes' scanner was down. Fortunately, NHRA histornian Greg Sharp had a color copy of the photo (provided to him by Dykes some years ago) and he sent it to me.

I got a nice note from reader James Hatley and a link directing me to his website for a look at his rear-engine machine from way back in 1960: the Vacuum Cleaner.

“I don't think we called things Funny Cars back then yet, but this may have been the first rear-engine Funny Car,” he wrote. "And we were too poor for superchargers ... but did run nitro/alcohol.” Power came from a 1953 Desoto Hemi displacing 292 cubic inches and topped with six Ford 97 carburetors on a dual-log manifold running 20 percent nitro. While the engine was down for repair, Hatley even put Northwest legend Jim Green’s 283 Chevy in the car for a while.

The car started as a ‘32 Ford coupe roller, and once the aero-trick front snout was added, the car got its nickname. “Silly I suppose now looking back, but we had a lot of fun,” he said. “The front nose was just thin aluminum with electrical EMT [conduit] bent and brazed together to make little a frame to hold it together.”

Hatley, who was based in Seattle, said that he ran 13 races with the car and lost only once, when the clutch disk surface let go.

“We towed the car to California and raced at two tracks -- a race at night at Colton, Calif., and a race during the day at Riverside, Calif. I remember how thrilled I was when Don Garlits came over to see the car. The car beat all competition in its class (B/Competition Coupe) at both tracks. Back at home, it set an NHRA national record (October 1960 at SIR), 12.12 seconds at 119.14 mph. The car actually ran 11.93 at 119.73 mph."

And finally, here’s another good look at Maynard Rupp’s Chevoom rear-engine Chevelle, referenced in an earlier column. Thanks to Richard Pederson for sending it, as well as the image below, combining two of the Insider Nation’s favorite threads: rear-engine Funny Cars and ramp trucks. Now if only there were a wedge Top Fueler parked next to it.