Getting our rears in gear 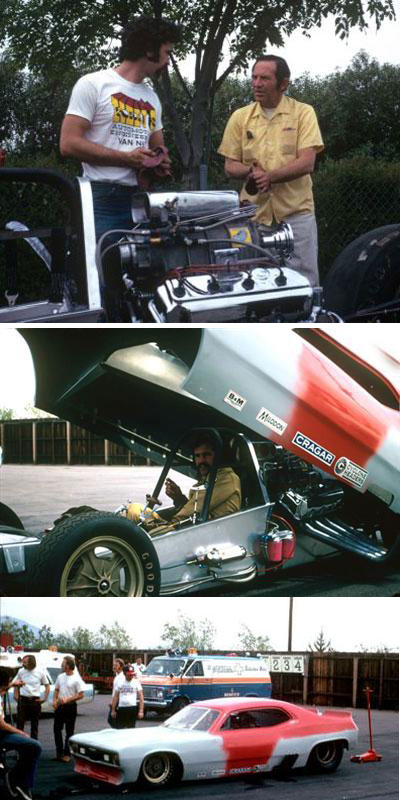 When it comes to rear-engine Funny Cars, the engine may have been in the back, but the love from the Insider Nation is front and center, and the DI mailbag started overflowing. After Friday’s piece on the Hindsight, I heard from two of its former pilots, Don Baumunk and Dennis Geisler (Jim Adolph, where are you?), thanking me for sharing their story. And I heard from famed 1960s/’70s race car builder Jay Howell, Funny Car hstorian Danny White, and from the United Kingdom, Australia, and Italy. (I also heard from DI regular Robert Neilsen, who thinks we should be calling them mid-engine instead of rear-engine, but that's a whole 'nother Oprah.)

Baumunk sent me a ton of photos of the early Hindsight, some of which you can see at right. He is the president of FatKatz, which makes aftermarket gas tanks and fenders for motorcycles; its work has been featured on the American Chopper series on the Discovery channel.

I gave Don a call, and we chatted about his time in the car and about Bert Berniker, who’s shown in the first photo here at right, in the yellow shirt talking to Baumunk. The photos are from the Hindsight’s maiden outing at Orange County Int’l Raceway in 1972. Interestingly, Baumunk had never driven anything quicker than a bracket car when Berniker asked him to drive his new creation.

“When you get involved with something as exciting as that deal, you’d think it would be stuck in your mind forever, but I cannot figure out how I got hooked up with Bert,” he admitted.

Despite a series of outings at both OCIR and Irwindale, Baumunk never ran quick or consistently enough to earn his Funny Car license, but he did register a best run of 7.29 at 200 mph, which is quite remarkable considering the handicap that Baumunk faced behind the wheel.

“I was so tall that I had to drive with the butterfly steering wheel [turned 90 degrees]; there was no room in the car for me to hold it straight like you normally would,” he said. “That wasn’t a lot of fun. Driving the car wasn’t my cup of tea anyway, and I didn’t want to try to be a hero, so I turned it over to Jimmy [Adolph]. I think a lot of people thought that Bert had a lot of money, but that wasn’t the case. He was just a fantastic, hardworking guy who got into something that he was just dumping a lot of money into.”

Howell (previously immortalized in this Insider column) wrote to remind me of the Dart Charger rear-engine car that he built in 1965 while employed at Dick Branster’s shop in Michigan.

“I designed and built the car; it was the first Funny Car I ever built," he said. “I was 22 or 23 back then. Dodge provided a new ‘65 Dart for the project. I powered it with a blown 426 Hemi on nitro and a 727 Torqueflite transmission positioned directly behind the driver; Frank Wylie (Dodge public relations vice president) funded the project. The Alexander Bros. in Detroit did the rainbow paint job. I tuned and drove it. We ran some match races and exhibition appearances. Garlits went with us once when we first tested it at Motor City Dragway and taught me how to read the plugs! We took it to Indy that year and set low e.t. and top speed. 9.02 at 164.

"Branstner lost his contract with Dodge and Wylie gave it to Garlits who put Emory Cook in the seat. They took the Torqueflite out, moved the engine back and ran it direct drive.  Emory turned it over backwards in the lights at Detroit Dragway. destroying the car. He was unhurt. That's the highlights.”

I also got a few requests for info on one of the most ill-fated rear-engine Funny Cars ever, Gary Gabelich’s wild four-wheel-drive Vega panel.

Just more than a year removed from setting the land speed record at 622 mph in his Blue Flame, Gabelich became involved in a venture dreamed up by Bob Kachler and Kenny Youngblood. Built around a monocoque aluminum frame by Paul Sutherland and Al Willard at Sutherland’s Race Car Works shop for around $32,000 – pretty pricey in 1972 – the car sat just 41 inches tall. Ed Pink power was applied to all four tires, which stuck out through the body as shown in the photo here.

While four-wheel-drive had been tested – most famously and successfully on Tommy Ivo’s four-engine Showboat – it didn’t work for Gabelich, and the car was destroyed on its maiden outing at Orange County Int’l Raceway in early 1972, severely injuring the world’s fastest man in the process.

Paul Stringer, a crewmember for Gabelich, reported, “Gary was asked to do some pictures with the car doing burnouts at OCIR on a non-race day, and while doing so, the throttle locked down, and he couldn’t get it back. He went sideways through the rails, rolled several times, lost the front end, and went back through the rails under full power, rolled multiple times, and ended up on its side and on fire. Gary had one hand cut off to the skin on the back, one leg behind his head, and one wrapped around the steering column. From this, the hand was reattached, but the one leg was so fractured that the bone was replaced with a steel rod.”

According to Steve Reyes’ account of the accident, only quick action by Gabelich’s friend, Gary Scow, who tossed Gabelich into the back of his station wagon and headed for the nearest hospital, saved Gabelich's hand and life.

Tom Schiltz sent this photo of the colorful War Wagon Vega panel Top Alcohol Funny Car at the 1973 U.S. Nationals. According to Schiltz, the car was built by the Sikora Bros. in Cleveland and driven by Squeege Jerger, who, with his son, Doug, now builds street rods, including one that won the ultimate prize at the Grand National Roadster Show last January, America’s Most Beautiful Roadster. 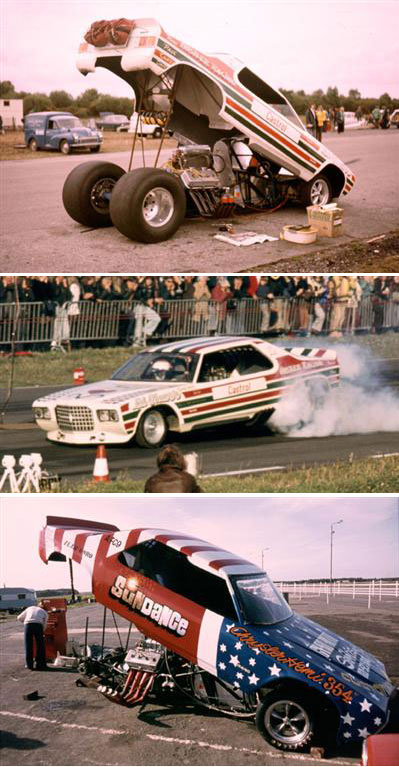 I heard from Alan Currans, who runs the Acceleration Archive website that covers British drag racing, and Pete Aughton, a former Brit now living in Montreal who spent most of his formative years at Santa Pod Raceway in England, as well as regular Insider contributor Mark Gredzinski about their country’s contribution to rear-engine Funny Cars, a Vauxhall VX4/90, which is shown  at right.

“There was only really one rear-engine Funny Car in the U.K., but like many cars, it went through a number of evolutions,” wrote Currans. “It was originally built by Mark Stratton of Hustler Racing, was sponsored by Castrol, and driven by the late Ed Shaver, who was a U.S. serviceman serving in the UK.” Aughton called Shaver, “a larger than life character.”

The car was sold to Pete Barnett, who ran it for a short while, then it was sold to Tony Froome, who repainted the car as shown in photo 3 and dubbed it Sundance (all his cars were “Sun” something or other). Froome changed bodies to the radical shell shown in photo 4, which Currans believes had been used on a Funny Car-style Competition Altered called Mr Shift.

Gredzinski insists that there were two completely different Sundance cars. “Everyone gets this wrong,” he said. “The Stratton chassis was found to be a couple of inches longer on one side than the other. It was cut up for scrap. Froome and his Team Sun crew built a totally new chassis and body for the 1977 season (to complement their Sundowner Top Fuel machine) -- I watched it being built in Hockley, Birmingham, near where I worked. As I understand it, the car never ran quicker than a nine as it only really shook down and had motor problems, I was told. However, it was a really radical car; super low with the Hilborn blower scoop sticking out of the roof.”

According to Currans, “There was another rear-engine car built, but I am not sure what class it was designed for, and it certainly didn't run much. It was built by Walt Ithel and named Aggravation.”

Australian readers Steve Pullen and Geoff McInnes pointed me to the exploits of their fellow countryman, Norm Oakey, who fielded this wild mid-engine machine, a twin-supercharged Goggomobil, in 1973, with his father, Bill. (According to Wikipedia, the Goggomobil was a microcar produced in the Bavarian town Dingolfing after World War II, certainly making this the most unusual drag car by origin alone.) “You may think it’s more altered than Funny Car, but that would make it a rear-engine altered – even weirder still,” noted Pullen. According to DragList, it appears that he first ran this car (or a similar car) with the engine in front, then switched to a Holden Torana body the next year and to a Camaro in the late 1970s. "Unfortunately,” noted McInnes, “they were all about as successful as Jim Dunn, with spooky handling. Norm and Bill stuck with the back-motor idea but cut their losses and switched to rails. These days, Norm's son and Bill's grandson Dean races a Top Alky Dragster and has won many national events, including the Australian Nationals (our Indy).”

And, finally, the proof that rear-engine Funny Cars are a popular topic comes from Tony Berens, who shared that his 10-year-old used my column here last week as the source for a school report and walked away with an A+. That’s my kind of teacher (and student)!