A farewell to Dave Condit

I was all set to kick off a discussion of dragstrip food when I learned yesterday about the passing of former Funny Car racer Dave Condit. I guess John Force mentioned it on the air during this weekend's ESPN2 show from Denver, but because I was elbow deep in mud trying to repair a leaky sprinkler pipe, I must have missed it. I received an email from a fan asking me about it and, as fate would have it, received a phone call from Force yesterday morning — on a non-related topic — and was able to confirm the sad news.

Force, as many of you are aware, was cousins with the Condit brothers — Dave, Steve, and Billy — and the nephew of their longtime partner and crew chief, Gene Beaver — aka “Uncle Beavs” — so it hit him kind of hard. I also learned that Richard Beaver, who also worked on the long line of Condit/Beaver cars, had passed away the previous Sunday. If you’ve ever listened to Force go on about the influence that his family had on him, you know it was a special group (more about that later).

The Condit/Beaver L.A. Hooker Funny Cars are as much a part of my early drag racing history as “the Snake” and “the Mongoose” — after all, that car name … wow! — and I watched and loved their cars for years. Their ’72 Mustang was on one of the first hero cards I ever got at the drags, and I think a lot of us rooted for them in the weekly wars up and down the California coast. We lost Gene quite a few years ago and Billy Condit in 2005, so Steve Condit is the only surviving member of the original group.

I reached out to Adria Hight, Force’s daughter, who was very helpful in getting me some dates about Condit’s passing for the obituary I wrote yesterday, and she said to expect a phone call from Steve, which I looked forward to but didn’t come in time for today’s column, because I had questions that maybe now only he can answer.

Again, I am kicking myself in the butt for not interviewing Dave when he called me a few months ago to ask for help in getting one of NHRA’s 60th Anniversary passes, which were being made available to past national event winners. I never met Dave, but like way too many of the phone calls I get from yesterday’s heroes who have been out of the limelight for a while, the call began with, “I’m not sure if you know who I am, but …”

Even though he only had the one NHRA national event win to his credit — at the 1974 Supernationals, best remembered for Shirl Greer’s heroic comeback to win the Funny Car championship — of course I knew who he was. I helped validate his accomplishments with headquarters to get the pass. He later called to thank me, and I asked for his phone number so I could do a column on him. He agreed, and I planned to do it this summer; I had no idea, of course, it was a limited-time offer, but through some research and old issues, I was able to pull together some stuff for a fitting send-off. 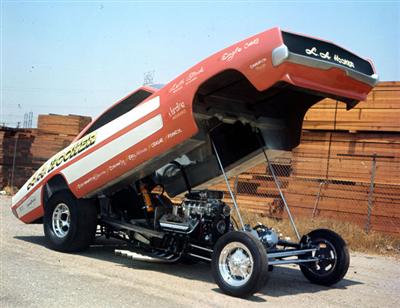 National DRAGSTER had profiled Condit right after his World Finals win, so there was some good info there. I also cruised through our pretty-thick Condit photo archives for some of the great pics on this page showing some of the team’s cars. You might not know it, but Condit actually began his driving career in Top Fuel, from 1965 to 1969, before the team jumped on the Funny Car bandwagon for 1970.

The team bought Nelson Carter’s Super Chief Dodge Charger, and with minimal changes to the paint scheme, it became the first L.A. Hooker, its name inspired in part by the Chi-Town Hustler. Getting its feet wet in the new class, the team eventually clocked a 7.01 best by year’s end. 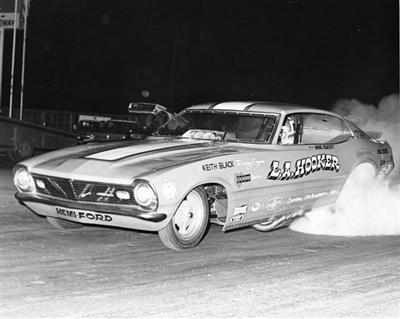 For 1971, Steve Plueger, who would offer Condit the seat in his Plueger & Gyger Mustang a few years later, built the team a new Maverick that ran really well and carried Condit to a runner-up at the March Meet behind Jim Dunn’s rear-engine 'Cuda. It was in the Maverick in which Condit famously was runner-up to Don Prudhomme at the Hot Wheels Northwest National Open in Seattle, the race that Prudhomme won while flying across the finish line on fire with the front end 5 feet in the air. You can just see the nose of Condit’s car in the background of that famous Al Kean photo.

“I had a pretty good view of that one,” said Condit, “but that’s something I certainly didn’t like to see. I was just glad that he did come out of it alright.” 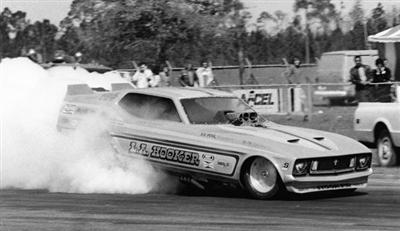 The team got its most memorable car, the first Mustang, in 1972 and was part of the Coca-Cola Cavalcade of Stars tour and enjoyed continuing success. Beaver was quoted in Condit’s PROfile article as saying that in 1971 the Hooker won 48 of 50 match races it participated in during the 1971 season and 22 out of 39 Coke events in 1972, “with runner-ups at just about all the rest.

“When he was racing with us, he was always limited by the fact that we were relatively ‘poor,’ and we couldn’t provide him with the best of equipment. He’s always had the talent, and I think that everybody finally realizes that after what happened last weekend.” 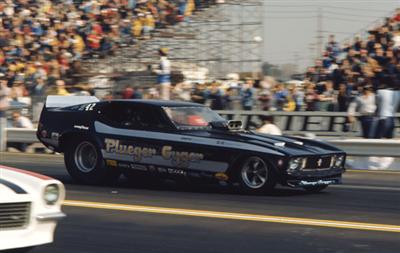 After a “not quite as productive” 1973 season, the Hooker team sat out 1974, and newlywed Condit stayed close to home, running locally in the Plueger & Gyger Mustang that led to his big win in Ontario, Calif., where he upset new national record holder Dale Pulde on a semifinal holeshot and red-hot Ed McCulloch in the final.

The Hooker was back at it in 1975 with a new-gen Mustang II body, but the Condits branched off on their own for a couple of seasons beginning in 1978. They reunited with Beaver in the early 1980s, but the sport had changed so much that they weren’t up to their usual competitive level and parked the car in the middle 1980s.

In researching Condit, I came across a great article on Force’s website from 2005, written after Billy died. Force had won the Phoenix event that year and dedicated the win to Steve and Dave and their mother, Bea, who was the sister of Force’s mother.

“I admired and looked up to Billy,” Force said. “He was an individual who, in the early days, inspired me with the stories that he told about driving across the country, following the racing circuit. He’d tell me stories about all the race teams out there — how they partied and how they played — and that was my early introduction to racing. I knew when they were going back on tour, and I knew that when they came back in the winter, the stories would start again. It was almost like he was a seaman who went off to sea, and when he’d come back, he’d have all these stories about the places he went and the people he met. Racing was a different world back then, and I lived for those stories.

“[Billy’s death] was a big loss to the whole family, especially to my Aunt Bea. Everybody used to stay at the house or come by for dinner. [Jim] Dudley and 'Honda Doug' [Woiwood], guys who do hospitality for Schumacher now, they used to be over there all the time, just like family. People don’t know how rich the family of racers is. Everybody knew Ma, and when the racers came to L.A., they stayed at the house. She was like a racing institution. Billy Meyer lived at the house one winter. That’s why the Woiwoods and the Dudleys were always there: for a meal and to have a good time. I said Aunt Bea was like the Ma Barker of racing. Ma Barker took in every outlaw there was. 'Pretty Boy' Floyd. 'Babyface' Nelson. Well, Aunt Bea housed some of the biggest outlaws in drag racing. That’s our roots.

“I remember in the days as kids, the Condit boys used to take me outside and we’d have some big ol’ free-for-alls and fistfights. It was always me and Stephen fighting David and Bill. It’s just where we came from.

“The Condits, the Forces, and the Beavers. It was never about winning championships, it was about surviving,” Force said, “but I remember every year I’d be playing football [at Bell Gardens High School], I’d call Beaver and ask, ‘Has Billy got home yet?' cause I knew Billy would bring back the stories from the East Coast about all the feuds and the fights and people like Shirley Muldowney and ‘TV Tommy’ Ivo and Raymond Beadle, the Blue Max.

“My dream was that one day I would be a part of that.”

I’d say he made it pretty good and has the Condits and Beavers in part to thank.

Even though we’re clear of the Prudhomme/McEwen/Hot Wheels thread (for now), I couldn’t let pass the news of the death of the father of Hot Wheels, Elliot Handler, who died Thursday at 95. Handler, along with his wife, Ruth (who created the Barbie doll using their daughter Barbara’s name and later that of son Kenneth), and their business partner, Harold Mattson, founded Mattel in 1945. The Mattel name was a combination of Mattson and Elliott. After Barbie’s success with girls, Handler wanted a toy specifically for boys, and Hot Wheels was it.

Without Elliot Handler, my youth certainly would have been much more boring and maybe not have led into a career in drag racing.