Fun with your photos

Response to my request for your Favorite Fotos has been amazing, and I'll present the first of them here. Submissions came from a lot of folks, including some whom I invited to participate instead in a full-blown future Fave Five feature. I was pleasantly surprised to receive some shots from Brian Forrester, who, if you're any kind of Sportsman racing fan, you'll recognize as our reigning Super Gas national champ. 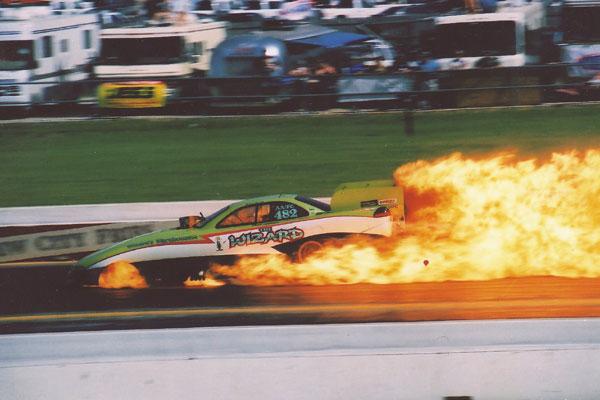 This is the story of Johnny Roden. "I took this picture 10 years ago, but I still remember it like it was yesterday. I was sitting in the top-end seats at the Lone Star Nationals at Texas Motorplex in 1998. It was a warm spring day but nothing seemed to be going my way with the camera. I had missed a couple of good shots, and, feeling frustrated, I put the camera down, ready to quit for the day. When they announced Funny Cars, I decided to give it another go. In the fifth pair, Ronny Young, driver of Tom Akers' The Wizard, tore off the line. As I was focusing in, I noticed fluid spewing out of the back of the car. I panned with the car and buried my finger into the motor drive. Just as he passed me, the car erupted into flames. Thankfully, Mr. Young walked away uninjured. 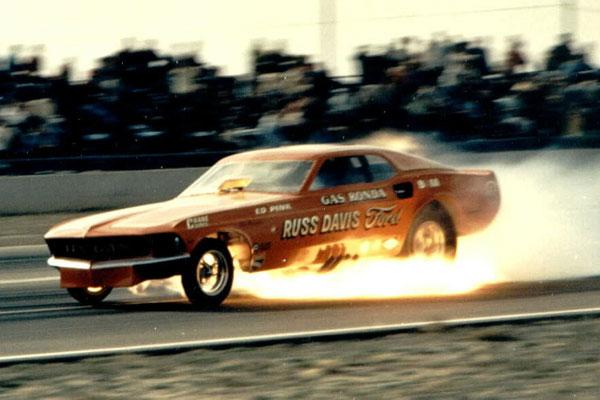 Tom Myl: "I know many of your readers have seen this photo I took at the AHRA Winternationals at Beeline [in Arizona] in January 1970. Kenny Youngblood did an artist's rendering of this photo. At the time, I was racing a '68 SS/AA 'Cuda, and, on the way to Pomona, we decided to [stop there] to shake down a new engine. After an hour or so at the track watching nitro cars run next to Stockers, I decided I wanted no part of that scene. I actually sat down on the guardrail a few hundred feet downtrack to watch, Kodak in hand. I snapped many good shots that day but nothing near this picture. After witnessing Gas' [Ronda] accident and fearing the worst, we left the track and did not return. Three or four weeks later, after returning home, I put the slides from the trip in my Kodak Carousel projector, and, wow! I knew I had a one-in-a-million image. Taken with a rare (because only a few of us bought them) Kodak Instamatic Reflex SLR with, I believe, a 30-80mm zoom using Kodachrome 100ASA." 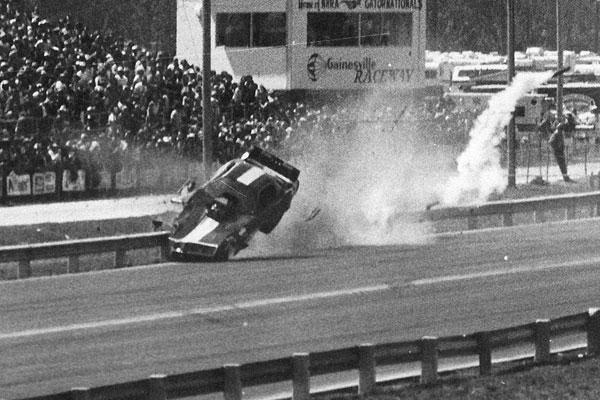 And you thought that reigning Super Gas champ Brian Forrester only could drive well? Apparently, he can shoot pics, too. This one is from the 1980 Gatornationals. "We had just gotten to the track on Saturday in time for some Pro qualifying and decided to go to the top-end stands on the spectator side as we didn't have reserved seats for Saturday. I had my trusty Canon A-1 with a zoom lens and a motor drive attached and a roll of Kodak black and white Tri-X film installed. Anyway, Len Imbrogno came up against Kosty Ivanoff, and the first thing I noticed was that Kosty had gone into a pretty big wheelstand. I missed that shot, but at about that time, I saw Len getting a little out of shape, and about the time I started hitting the shutter, he hit the guardrail. He ended up getting the car stopped right at the finish line just a little ways past where the spectator-side bleachers ended." 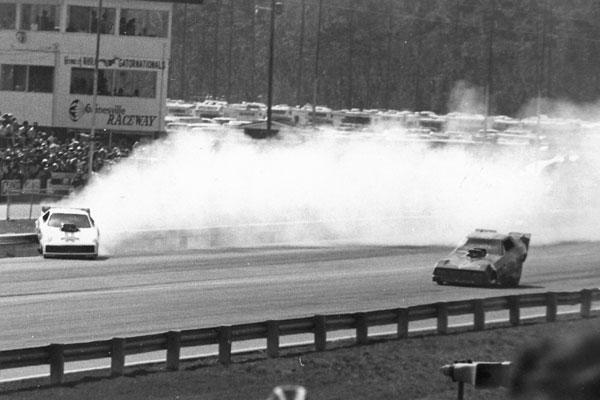 Another Forrester favorite, this one from the 1981 Gators, shows Gary Burgin getting way out of shape in the Orange Baron Mustang alongside Fuzz Miller. "To look back on all those years ago, who would have ever thought that not only did I end up winning the Gators not once, but twice, in Super Comp and Super Gas," he mused. "And, ironically, both final-round wins came out of the same right lane those photos were taken. Hmm, makes you wonder? 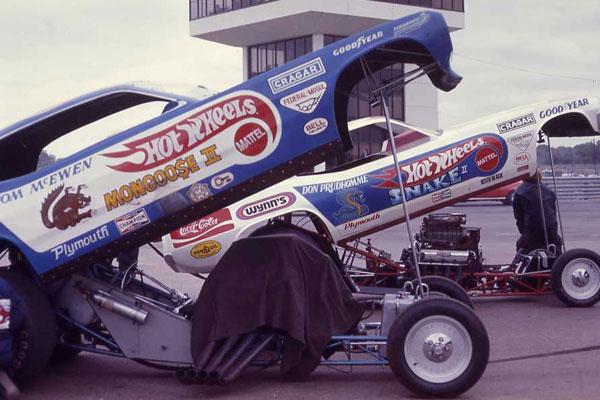 David Graves, father of prolific freelancer Chris Graves, shot this pic Sept. 19, 1971, at Dallas Int'l Motor Speedway at a match race between Don Prudhomme, Tom McEwen, Gene Snow, and Jake Johnston in Snow's second car. "Crappy day; they got maybe one run in, but finally drizzle took it," he recalled. "I got this shot under the tower at DIMS as the cars waited for the rain to go away. Taken with an old Minolta 35mm with Kodak slide film. I have always loved to take photos of drag racing cars; I was 14 years old when I took this." 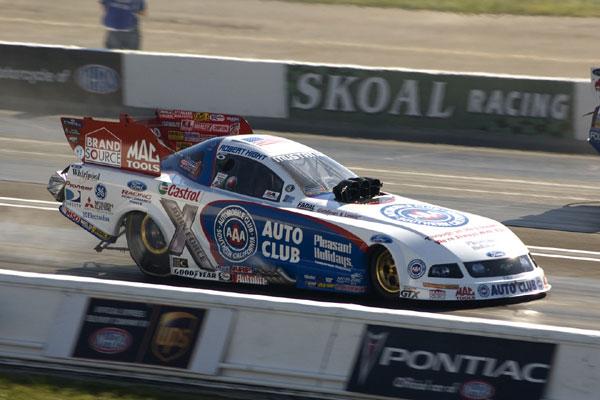 Damon Atherton grabbed this crystal-clear shot of Robert Hight, running Mike Ashley in the final round of the 2007 U.S. Nationals. "I know it's nothing spectacular, such as a blowover or an explosion," he wrote. "It's just a great picture, one of the best I have taken. The cars were probably 400 feet downtrack when this was shot. I love the picture and have gotten a lot of compliments on it, including from Robert Hight when he signed a copy of it. Shot with a Nikon D70, Nikkor 3.5 70-300 @ 180, f8, 1/640." 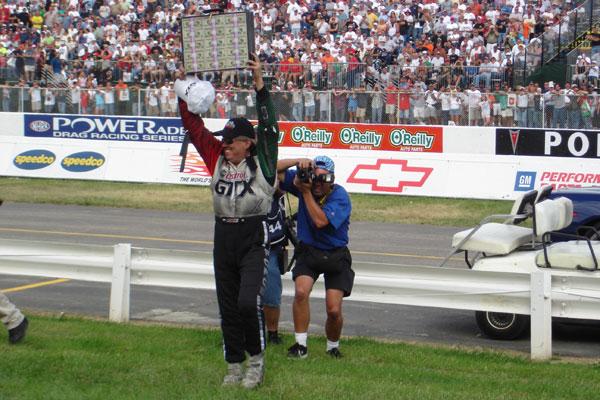 From Tom "Fasthair" Scott: " 'Superman' after winning the Skoal Shootout at Indy in 2006. Do you think he was happy?" I'd say yep. That's ND photog Marc Gewertz getting the other angle. 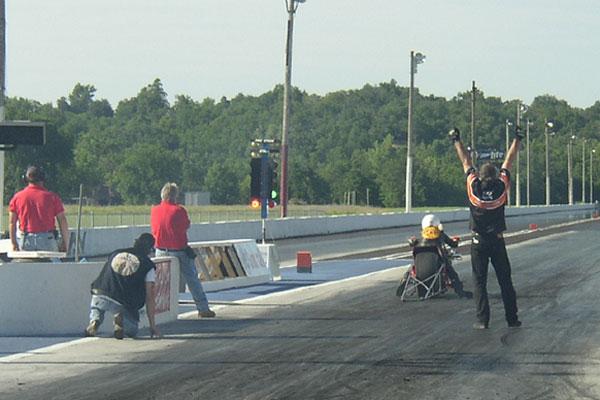 More from "Fasthair:" "My late, great friend Dave 'Frog' Kent on his Pro Fuel nitro Harley. He built this bike himself and had some success with it over the years. This photo was taken in the first race I was crew chief on the bike by myself. Even though the other rider red-lighted, 'Frog' made a great pass of 8.04, 167 and some change to win the event. You've never seen a happier 60-year-old in your life as when I got to the end of the track to tow him back to the pits. As you can see, the photo almost caught me completely off the ground. Does it count that my girlfriend, Melissa, took the photo with my camera?" 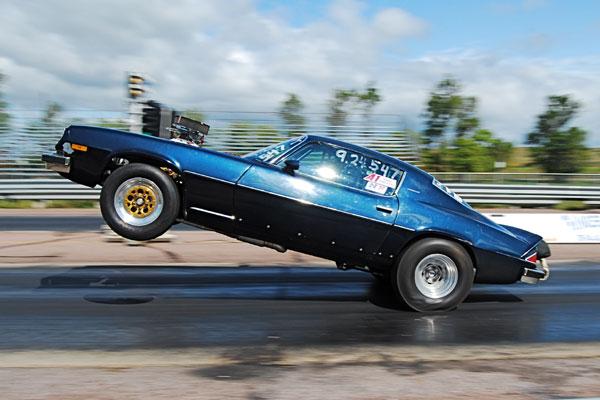 When I first came to ND in 1982, one of the most prolific bracket reporters was Tim McVay, who covered action in South Dakota. All these years later, we reconnected when he sent in this great wheelie photo from last summer. 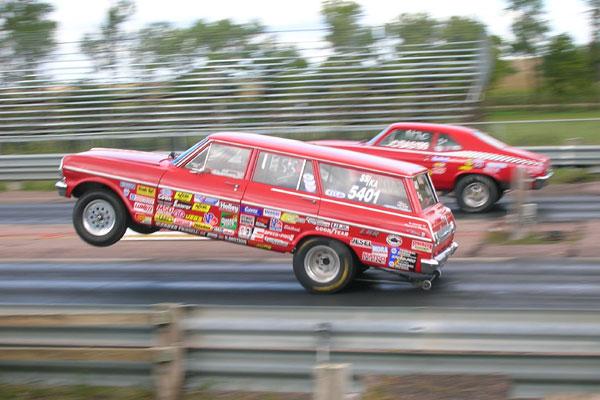 The traction in South Dakota must be really good. Wrote Adam Lamprecht, "I took it on my family's digital camera. It was the last full race weekend of the year, and they had the Stock/Super Stock Combo going on that weekend. I took the camera out because I thought I'd get some good launch pictures of the Stock/Super Stock guys, as they're probably the most fun to watch, as most of them launch with awesome wheelies. There were a few good ones, but this one was probably the best. Scott Burgeson is in the near lane with his SS/KA Nova, and Brian Grosz is in the far lane with his Nova." 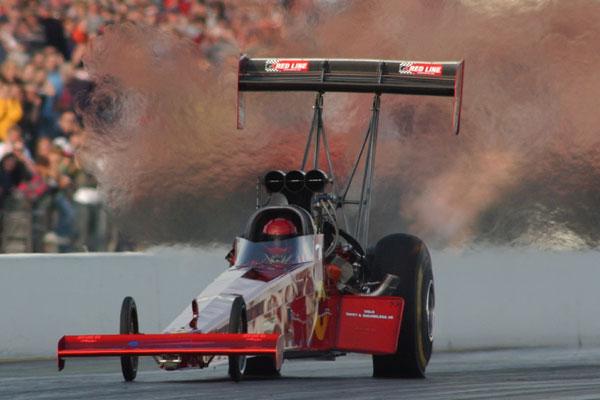 Martin Grosse-Geldermann nabbed this great top-end shot of Thomas Nataas during the 2006 European Finals at England's Santa Pod Raceway. "It is amazing how a fuel car looks at 300 mph," he marveled. "The photo is not manipulated in any way. Nikon D1H, Nikkor 600mm f4 + Extender 4x, 1/1000 seconds at f4, ISO 640." 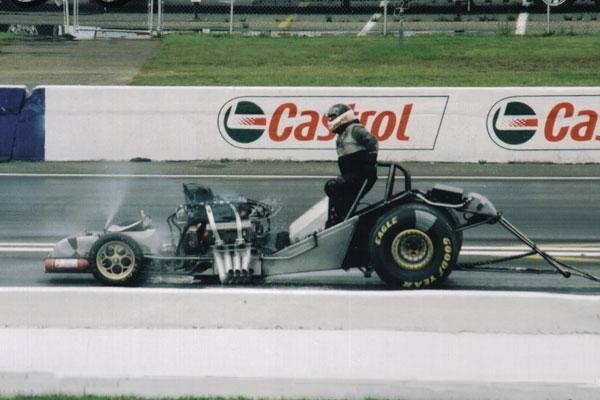 From Dave Wrobel: "I have quite a few photos of cars with 'problems,' but the one I kinda like the best is Dean Skuza in 2002. It's not the flashiest one I own, but it's kinda cool. Skuza was racing Johnny Gray in the blue CSK car in the first round. The way I remember it is they both smoked the tires early. I usually try to follow the car under power when I shoot, so I followed Gray for a bit. Then, out of the corner of my eye, I thought I saw something flying around. It turned out to be the body from Skuza's flopper. With fluid still spraying out of it, Dean safely stopped the car in front of where we sat. He then climbed out and took a bow. What else can you do after a performance like that?" 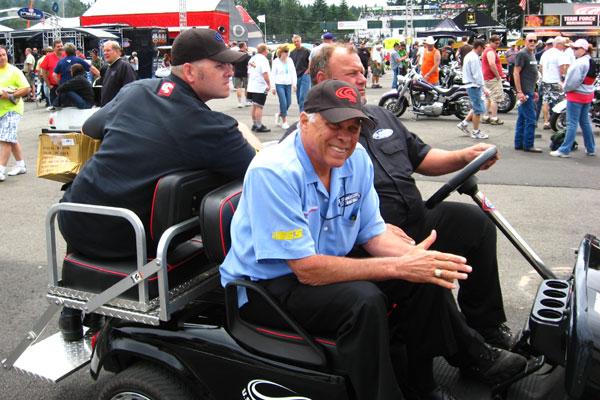 They don't have to all be on-track photos, as Matt Benoit of Bellingham, Wash., proves here. "I took this photo of Don Prudhomme last year at Seattle, and although it was real spur of the moment, it’s one of my all-time favorite shots of one of the NHRA’s all-time greatest competitors. I had just arrived at the track late Friday morning, and as I began to walk through the pits, I noticed a golf cart speeding towards me. Suddenly, I realized it was 'the Snake' himself. Even though 'the Snake' and company were obviously in a hurry, Don noticed me enough to quickly smile and look directly at the camera. The composition of the photo turned out pretty decent. He’s got his trademark hat on and is just a little right of center in the frame."

Here's another pretty cool image that has been making the e-mail rounds. Back before the rules became a little more refined, it wasn't uncommon for race officials to insist that if both cars broke, the winner would be determined by which driver could push his car across the finish line first.

The pic shows Top Gas/Top Fuel driver Walt Stevens collapsing behind his dragster in Riverside, Calif., in the 1960s after both his car and the car of Bill Dunlap broke in the first round of Top Fuel. Dunlap got there first but also collapsed.

"Bill blew the bottom of his manifold out, and we blew the rear end," remembered Stevens. "That started the big push. It was 112 degrees that day. I jumped out and started pushing the car; got my race face off and still was ahead of Bill, but with the rear end being broke, it would hang up on something and come to a stop. I would have to pull it back a little and then start all over again. I did this about four times and was ahead of Bill to about half-track. Dick Linens owned the car and was running alongside telling me, 'If you win, you can have all that round money,' so I pushed harder. At about 1,000 feet, the lights went out. I fell to the back of the car, and when I fell, I pulled the chute handle, and the chute came out on top of me. Bill won the race, and we both ended up in the hospital with a temp of 107 degrees. They made us take off all of our clothes and go in to a very cold shower. My head felt like it was six feet in diameter. I had a headache for about a week after that deal."