Reigning and five-time NHRA Camping World Drag Racing Series champion Matt Smith is leading the Pro Stock Motorcycle points after St. Louis, and one of his toughest competitors is right there in his own camp. Oh, and she's at home, too: Matt's wife, Angie.
03 Oct 2022
Kelly Wade
Feature

The Matt Smith Racing team operates with a very interesting dynamic. Reigning and five-time NHRA Camping World Drag Racing Series champion Matt Smith is leading the Pro Stock Motorcycle points after St. Louis, and one of his toughest competitors is right there in his own camp. Oh, and she's at home, too: Matt's wife, Angie, is holding her own in the audacious 200-mph two-wheeled category and left the NHRA Midwest Nationals No. 3 in the championship standings. That's just 90 points behind her husband.

"A lot of times I sleep on the couch," joked Matt, following the win at World Wide Technology Raceway this past weekend that boosted him back into the points lead. "But really, as long as one of us can take this championship home, it doesn't matter. Either I get six of them, or she gets her first one. That's what we're after right now." 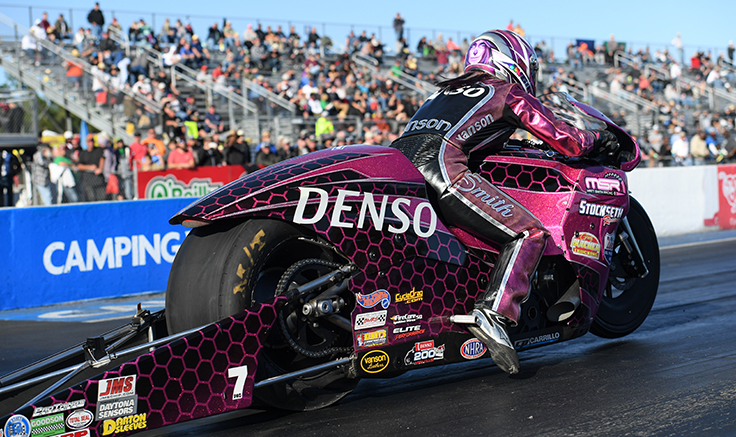 Angie, who joined the 200-mph club last year in Dallas with a 200.89-mph blast, is having a career year aboard her DENSO/Stockseth/Matt Smith Racing Buell. She opened 2022 with a final-round finish to Karen Stoffer in Gainesville, and that powerful launch into her 18th season set the tone.

In Richmond, Angie earned the second No. 1 qualifier award of her career, and she's qualified fourth or better in eight of 12 events this year. Angie's race-day performance has kept her in the thick of things, and her scorecard reflects a rider capable of winning. Her two final rounds in 2022 are complemented by three trips to the semifinals.

These are hard-earned accomplishments in a class that has had a shift in the points lead seven times in a dozen races.

"This class is one of the hardest classes there is to race," said Angie. "You have to be so technically perfect on these motorcycles every single time. Before, there might be two or three people fighting for the championship, but now, you legitimately have seven or eight people who can go out there and win the championship.

"That is awesome. But this is the toughest thing I have ever dealt with in my life, trying to get this motorcycle down the quarter-mile dragstrip perfectly more than once a race weekend."

Angie has had a top-notch instructor in Matt, whom she married in 2009, and although they are both very competitive, their partnership has continued to work. 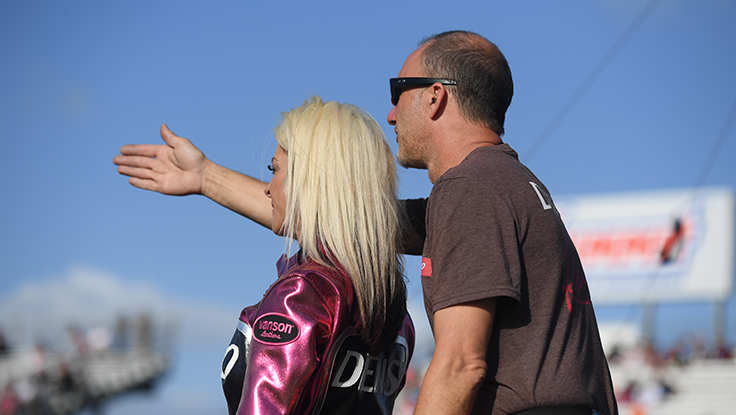 "He still shows me things where we can improve," she said. "It used to be a really long list of things, but I've narrowed it way down. He's still my coach and my mentor, he just doesn't have to tell me as many things now."

When the coach and student are both vying for victory in the same class, it surely has the potential to ignite negative feelings and interactions, but the Smiths battle against one another with a respectful though definite rivalry.

"I was No. 1 on Friday in Reading, then he came out and was No. 1 on Saturday – but then I had bragging rights because third round I was low of the round," she said with a grin. "It's a constant battle because we have that drive inside of us to be competitors no matter who's in the other lane. We both want to be No. 1, so there's always trash talking and a bet on reaction time or e.t. if we have to run each other in qualifying. 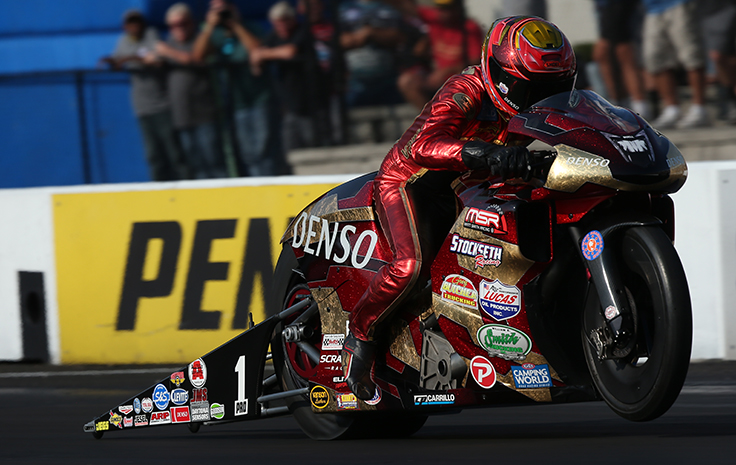 "But we race each other fair and square. There are times I get frustrated with him and he gets frustrated with me, but at the end of the day, this is what we love, and we're thankful to be able to do it together. Of course, you want to win the championship for yourself; every driver out there is selfish in that way. But this is truly a team effort. If any one of us can win it, it's a win-win."

Matt built upon Angie's statement, reinforcing their stance as a team rather than individuals fighting alone for the grandest victory of all.

"We want to be the best team out here," he said. "These guys and girls are going to have to go through us to get the championship, and we'll put up a dog fight. They gotta go through me and Angie."