Nineteen-year-old Doug Lambeck was just beginning his racing career in local competition in one of his father’s Super Stock cars, but there was every reason to think good things would come.

Nearly 30 years later, Doug Lambeck, now 48, is still racing with his engine-building father and has established himself as one of Sportsman racing’s most consistent winners. He has won the prestigious U.S. Nationals twice, won division championships, and ranks among the top 10 winners in his current class, Comp eliminator.

Even with a rich, three-decade history of success, it’s Doug’s recent streak that has drawn the attention of the Comp cognoscenti, as the Southern California hotshot has reached the final round of the last three NHRA national events, with two wins and a runner-up to his credit, and has been in the final round at seven of his last nine national events he has attended stretching back to the 2018 Auto Club NHRA Finals. 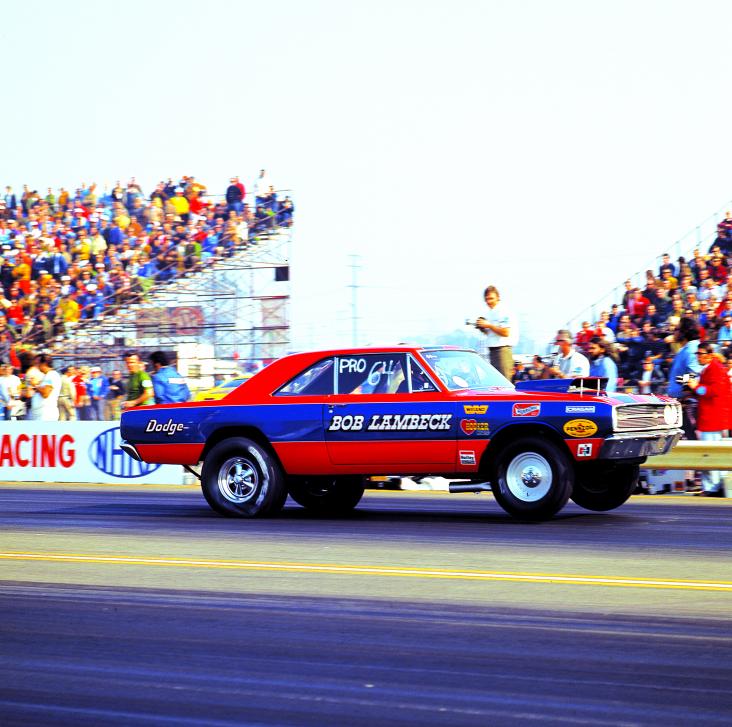 The Lambecks have always enjoyed success at their home track, Auto Club Raceway at Pomona. Father Bob was a Winternationals class winner as far back as 1962 and won the Stock Eliminator title there in 1983.

Doug has been to the final round in Pomona — at either the Winternationals or Auto Club NHRA Finals — 14 times with seven victories, including at the facility’s two most recent events, the 2019 season finale and the 2020 lidlifter.

The 2019 Finals win put the wraps on a terrific season that also included victories at the spring Las Vegas and Seattle national events and a runner-up at the Winternationals.

He followed this year’s Winternationals win with a runner-up at the NHRA Arizona Nationals, where his final-round loss to two-time world champ Dean Carter ended an impressive 14-round winning streak. 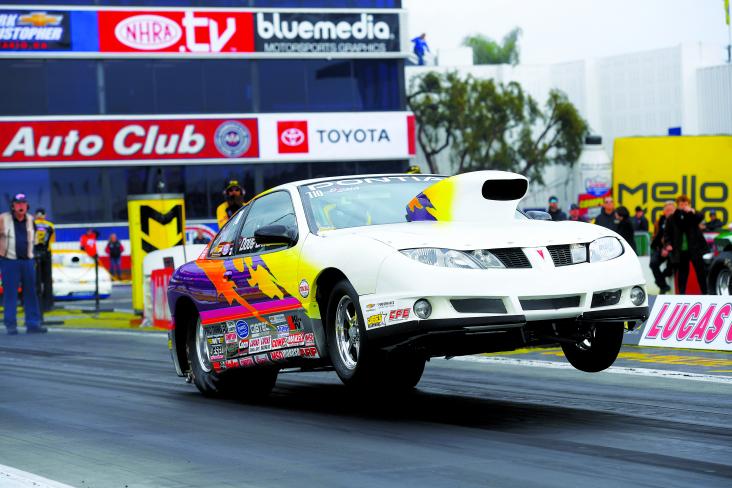 “It has been a little bit of everything,” Doug explained. “The car’s running good, I’m driving decent, and we’re getting the luck that we need to win the races. So, it’s kinda been a nice combination of all three.

“Comp’s a very tough class; there’s a lot to Comp that you don’t see. You need to drive well, and then you need the other guys to go fast even when they lose to hit the [winners’] indexes during the rounds, and you need to get that lucky bye run when it really counts. If you put that all together, you come out with a nice ending.”

The Lambecks don’t race as much as they used to, based on Doug’s important 9-to-5 as director for a real estate investment company, but they make the most of every outing.

“We’ve had a couple of other runs of success but nothing like this right now,” he admitted.

Doug’s racing career began in the California Stock/Super Stock Racing Association in early 1991 not long after an injury ended his college baseball career.

“I was turning a double play, and my cleat got caught in the bag, and the [runner] spiked me in my leg, and I hyperextended my knee, so I decided to hang it up,” he said. “I’m not saying I would have ended up in the pros anyway, but it was right after that when I started to race.”

He caught on quickly, and in just his second year of competition, he won the NHRA national event in Topeka and followed later that year with his first victory in Pomona at the Finals. 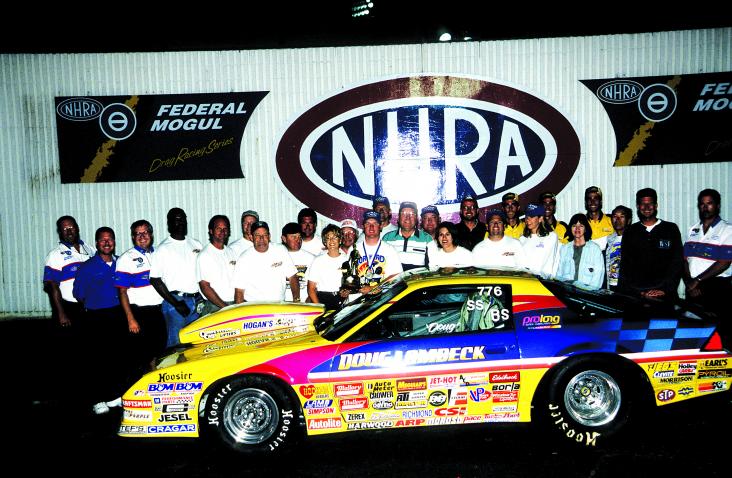 “I’d always known how big Indy was, and even to just win class there was a big deal, but to win the eliminator was unbelievable,” he said. “I remember racing Bobby Rashad in the semifinals, and when I came out of the wheelstand, I knew I had a good light, and I said to myself, ‘You’re going into the final in Indy!’ and I was fortunate to beat Peter [Biondo] in the final in a great race, and it was just unbelievable. He’s the best out there, and it was just my day. He went under by a thousandth, and I went dead-on, and it went my way.” 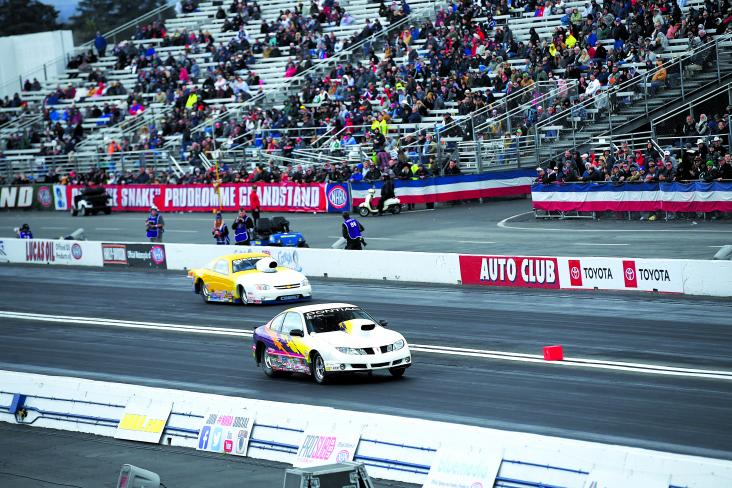 The dual Indy wins were Lambeck’s last victories in Super Stock when he transitioned into Comp in the early 2000s with the same EasTexas Race Cars Sunfire that they still run today.

With 10 of his 16 career wins coming in Comp, he’s tied for ninth overall in class history with guys like Steve Ambrose, John Lingenfelter, Sal Biondo, Glen Treadwell, Steve Taylor, and Craig Bourgeois. And even as he and his fellow competitors have watched the class struggle with field sizes, he believes that the competition has gotten nothing but stronger.

“Even though there aren’t as many cars in the class now, everyone who shows up is fast,” he said. “As tough as it is, if you’re not fast, sometimes you just don’t go. It’s just become an expensive class — obviously, engines and cylinder heads are the big-ticket items — so people are limited. They don’t test anymore to try to get their combination faster. There might be fewer cars, but for the most part, they’re all fast.

“People look at Comp from the outside, and it looks really easy, and sometimes, it is really easy, but you could also go out there first round and go .60 under and then get whupped second round, so there’s just a lot to it.

“We’ve also lost a few teams to Top Dragster and Top Sportsman because they can just run what they can dial their cars to, and even if they’re not the top qualifier, they can still win. It’s just a different style of racing.” 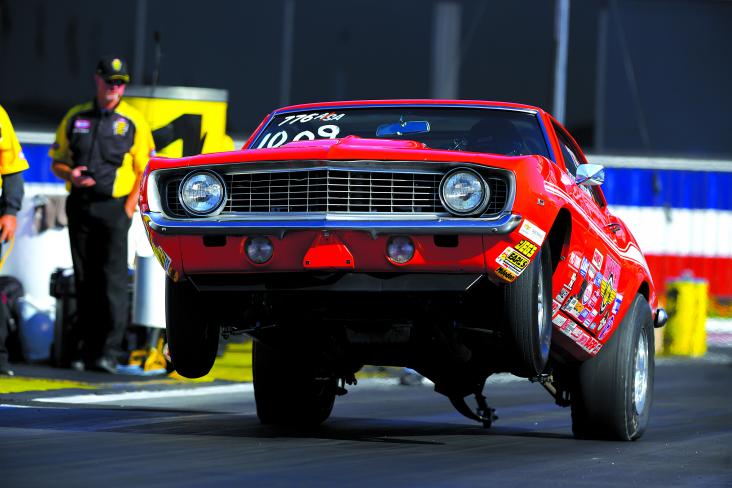 Having your father as your engine builder is one way to save costs, and Doug has been fortunate to have that advantage throughout his racing career. Father Bob is still building and tuning engines out of the same Northridge, Calif., shop for decades, and Doug will tell you that the old man is key to his success.

“He still works every day and doesn’t plan on slowing down anytime; he’s a diehard,” said Doug. “I’m not as good a driver as I used to be, and we don’t race as much as we used to. I’m solid, but the car helps me out, and my dad helps me out a lot with the power, so it’s a good team effort.

“He has total control over his engines. He knows exactly what he’s doing, so the cost savings on his labor and just being able to test different items on the dyno anytime you want definitely is a benefit to us.

“I think it’s his attention to detail and willingness to try different things, but just not trying to change too much. We’ll change little things, but we don’t make drastic changes. We’d rather do small changes then overhaul the whole entire operation, and I think that’s been one of our keys to success.”

“We still get really excited when we win — even round-wins are exciting — and it’s really special to be able to race with my dad,” Doug continued. “I think we’ve taken it for granted, but when I tell other people who are not in the racing industry what I do and who I do it with, they always say, ‘Oh, it’s so cool that you can do something with your dad because I never got to do that’ or ‘I didn’t have a hobby that we could bond over.’

“I was talking to somebody in Pomona, and he was struggling, and I just reminded him to just enjoy the time he had with his father because they’re not always going to be around. We need to take a step back and get our priorities straight and appreciate the time that we’re able to race together.”

Doug’s living that advice both ways now that his own son, 5-year-old Austin, is part of the race team and credited by Doug in on-camera interviews as his “crew chief” after his Winternationals victory.

“He’s 5 years old and is really into it,” said the proud father. “It has been fun to have him with us because I’ve been able to enjoy it with my son, too, just like my dad has, and now he understands racing and knows the racers out there. He goes to the Pomona races and Vegas with me, so we’ve been fortunate to be in a lot of finals as he’s growing up.

“I was too old when Jr. Dragsters got started, but Austin really wants to do it, so we’re starting to think about it. My dad says he’d do it today if we had the chance.”

Grandpa Bob is all in. 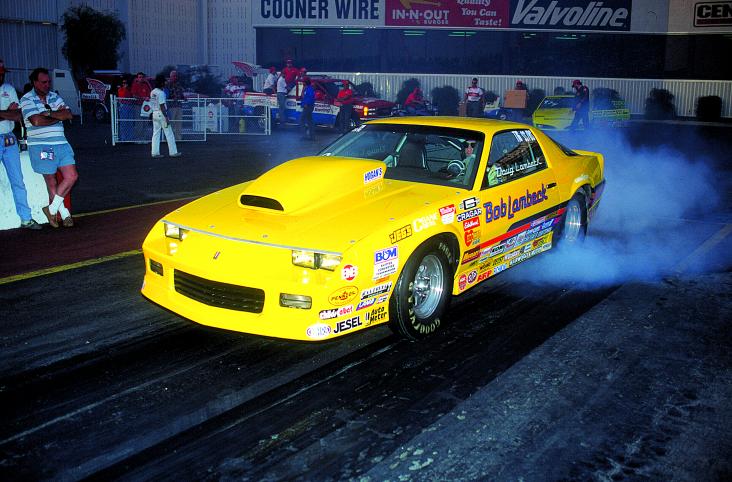 Doug’s highest career finish nationally was fourth, and he’d love to have son Austin hoist a championship trophy, too. Father Bob won world championships in Stock with driver Tim Ekstrand in 1975 and 1985, but there’s no big trophy on the Lambeck mantle yet for Doug. No Californian has won a Comp championship since Andy Manna Jr. in 1999.

“It’s so hard with our limited travel, but we’d like to try this year,” he said. “Even with a win and a runner-up nationally already, it’s way too early to get too secure. With guys like Frank [Aragona Jr.] and Brad Plourd out there, you know you’re gonna have to do well. I don’t think you need a perfect score to win, but you’re gonna need a lot of wins — maybe five or six wins and a semifinal average — but we’re in it for the long haul, and we’ll just see what we get.”

“We’ve been doing it too long to know how this all plays out, but we’re gonna try hard. If we’re fortunate to be at or near the top at the end of the year, we’re gonna give it everything we can. I can assure you that.”