The first race of the NHRA Countdown to the Championship is in the books. Read what the teams had to say following the Mopar Express Lane NHRA Nationals presented by Pennzoil.

“Maple Grove has been a problem for us. We’re either really good or really bad (three first round losses and a DNQ along with a win and a runner-up in nine appearances) and this year we just weren’t that good. Good race with “Hillbiilly” (Millican), but it didn’t go our way.  I didn’t do my job.

"He threw a .047 light (starting line reaction time) at us, but that’s what you get when you’ve got that big No. 1 on your car. Big bullseye and today they hit it.  We just need to regroup and go back to doing what we do.  There’s still a lot of racing left. At least the pressure’s off on whether or not we can sweep (again).”

“It’s a huge win for us. I’m so lucky to be a part of this team. I hated to race my teammate, Doug Kalitta, in the final and win, but it was a great day for the whole team. We had three real strong runs to close out qualifying (including a 3.689), so we knew we had a car that could contend. Then we had another strong run in round one and made another solid pass in the second round. In the finals, we had a pretty good light and made a really good pass to beat a great driver and team. For DHL, Toyota, Wix, Global and everyone who’s stayed behind us, this is big. It’s the business time of the year. It’s just so important to get round wins and try to run for a championship. We’ve shown we have a car capable of competing for a championship. Now we just need to keep digging in these last five races.”

“Not exactly how we wanted to finish out the day, but if we had to lose, at least it was to one of our teammates. It’s always fun to race Connie’s car in a final. It was a good race and we ran pretty well, but Richie and the DHL guys made a really strong run. I was a little nervous in the semis because in the first two rounds we went down the right lane, so I wasn’t sure what to expect down the left lane, but the TRD Toyota guys are out there looking at both lines. I’m just really proud of those guys and my entire Mac Tools team.”

“We made up some ground which is good. I would have loved to have won this race again but we closed the gap on a lot of teams and my DHL Toyota Camry Funny Car definitely came around on Saturday and today. I like the direction we are going.”

"This isn’t the way we wanted to start the Countdown. The good news is some of the top teams also went out early and we are still very much in this championship battle. We are going to take the positives from this weekend and build on them for St. Louis.” 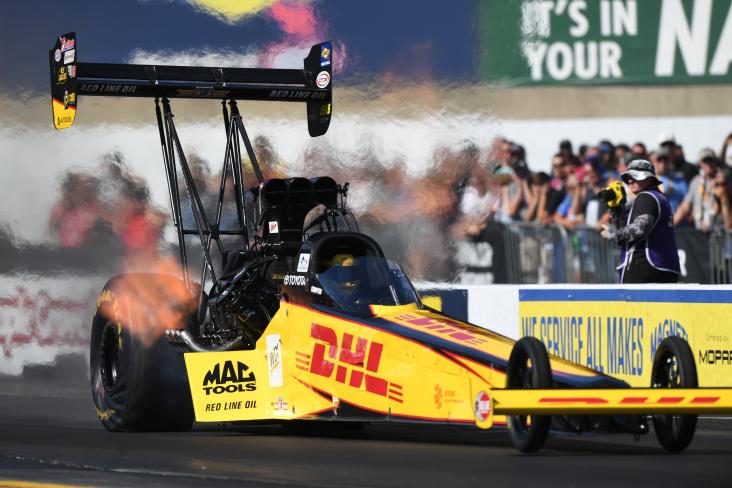 “Fans come up and say ‘are you going to win this weekend?’ and I say yes. Every single race I say ‘yes’ because there’s no reason to think we can’t win. We’ve got the tools, we’ve got the parts, we’ve got the people, and I’ve been wrong eighteen times this year. And then you don’t know, when you’re down to just six races left and you look at the caliber of cars out here, you don’t know if you’re going to be able to win a race. I know we have a car capable of winning a race, I know if I drive up to my potential we have a driver capable of winning a race, and sometimes it’s just trying to find both of those on the same day."

“We came out and qualified well and learned a lot. This isn’t the result we wanted. We wanted to get past round two, for sure. Race day could have been worse, but it also certainly could have been better for this Matco Tools Toyota team. We’ll take what we learned from here and move forward for St. Louis. We have to keep on pushing. We’ll keep our heads down, stay poised, and get after it. We have to learn from this and be better.”

“What an eventful weekend. Ultimately, we have a better car, package, and team than our results show, and that is what is most frustrating. Our quick and consistent qualifying was no accident, neither was our first-round win. Our second-round elimination was not a factor of tuning up too far over-center for the competition, but merely blindly adapting to less track prep conditions than the previous two days of qualifying, which resulted in us smoking the tires against Austin Prock, one of our strongest rivals. We still believe we have a better package this last quarter, and we are excited about our full potential showing through in St. Louis as it did in Brainerd.”

"This was a wild weekend. It was crazy for us to come here with a game plan to work on, knowing the cool temperatures that faced us on Friday and Saturday, especially since we’ll likely see similar conditions later in the Countdown. Then, to go out and set the track records, that was fun because I knew what we were trying to do, and it was neat to go out and watch a plan come together."

"First round losses are the kiss of death with the Countdown. We got past the first round, and we have five races left going into St. Louis. It was a hot, greasy track today. Avoiding that first round loss is key, and we did that. We had a good, fast race car beside us with Ron and we had to push it a little bit. They went 3.91, which was low of the session, and our lap wouldn’t hold. We’ll roll into St. Louis with a great MOPAR team, and there’s a lot of racing left in 2019.”

“Today certainly wasn’t ideal. We ran decent in qualifying and coming off of such a great season so far, I had high hopes for the Countdown, but starting off with a first-round loss isn’t what we had planned. Not totally demoralized by it, but we have our work cut out for us now. We’ll have to do exceptionally well at the last five to regain our position if we want any shot at the championship. I’m sure over the next week or so we’ll reevaluate and see if we can’t turn things around in St. Louis and keep a shot at the championship.”

“Good day; got to the final. Beckman with a .028 light. I can’t beat that on my best day. But my PEAK car has been very consistent and these kids give me a lot of heart and a great race car that’s fast. We’re not in the lead, but we have two cars – Robert and myself – and I’ve got two other cars with Brittany and Prock that are starting to hurt some feelings out there. Brittany leaving here with the national record and Prock really knows how to pedal. He’s learning all this like Brittany did, and he’s learning it fast. And you can’t say anything about Robert; he’s already the best.”

“Another good points day; made it to our fourth consecutive semifinal and just came up a little short. The car left extremely fast for some reason and we’re scratching our heads about it. Not a bad day overall. I would’ve liked to get in the final round, but good points day all in all and we’re going to be able to contend for this championship."

“[The Advance Auto Parts dragster] was leaking up at the manifold. It was through a jumper line we have on our fuel rail and the leak was bad enough that it would have ended up pulling in front of the rear tire. It wasn’t safe to run the car so we shut the car off. It’s just one of those things that happens. We found the leak and fired the car back up here in the pit to make sure everything was good and it is so we’ll be ready.”

“Great weekend in Reading. It was the first race in the Countdown and an awesome weekend for the Advance Auto Parts team. We are officially the quickest team out here on the race track, running a 3.623 setting the national ET record so I’m very proud to hold that with David Grubnic, Mac Savage and all the Advance Auto Parts boys. I had a good race day. Unfortunately, in the semis we had a fuel leak, a loose line so we know what the problem is and we know how to fix it. It won’t happen again and we’ll pack up and go to the next one and push a little bit harder.”

“We still have the same gremlins in the clutch. We went to Indy and tested this week and thought we had it fixed, and obviously we didn’t. We’re going to stay here tomorrow and test. We didn’t get beat up that terrible in the points, but we definitely can’t afford to have two bad races in a row. We have to get it fixed and move on to St. Louis. We won there last year and have to win there again.” 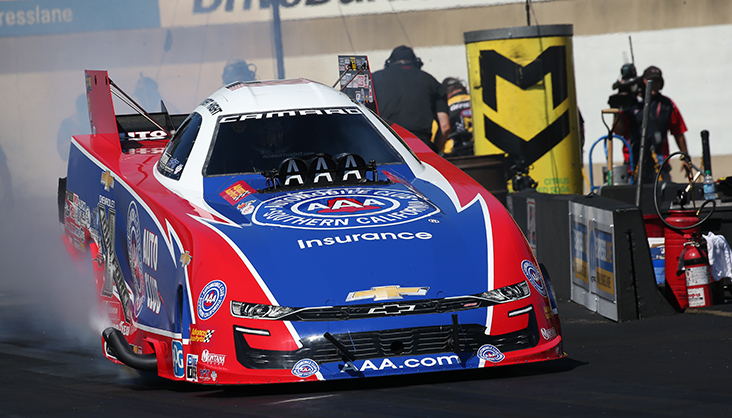 "We gained a bunch of momentum this weekend and we definitely feel like we're leaving town in better shape than how we arrived. We made some wholesale changes to our team and everything we tried worked out perfectly. I couldn't be happier unless we had managed to go all the way and get a win today."