Tii Tharpe established a dynasty for Jay Turner Racing by winning the Top Fuel Harley outfit’s third straight title, and his second in a row, on the final day of the season. It took less drama than his 2018 world championship, but the North Carolinian took his steady approach to another title and asserted his team as the dominant force in a class that can only be tamed in fleeting moments down the quarter-mile.

Tharpe’s biggest rival remained Doug Vancil at every step throughout the 2019 season. Vancil, the Vance & Hines-backed Mickey Thompson Tires NHRA Top Fuel Harley Drag Racing Series rider, came 48 points short of winning his first NHRA Top Fuel Harley title a year after coming within a round of tasting the ultimate glory. Tharpe won fewer races in 2019 than he did in his inaugural title-winning campaign, but that made his second championship no less sweet.

“This season was a lot tougher on me mentally in that I had won and that I was the reigning champion and kind of being chased all season,” said Tharpe. “I didn’t expect the pressure to quite be what it was. It is a completely different mental game, and that was really the biggest difference for me. It was just, you know, kind of having a bull’s eye target on your back and then still being expected to rise to the occasion or to the challenge.” 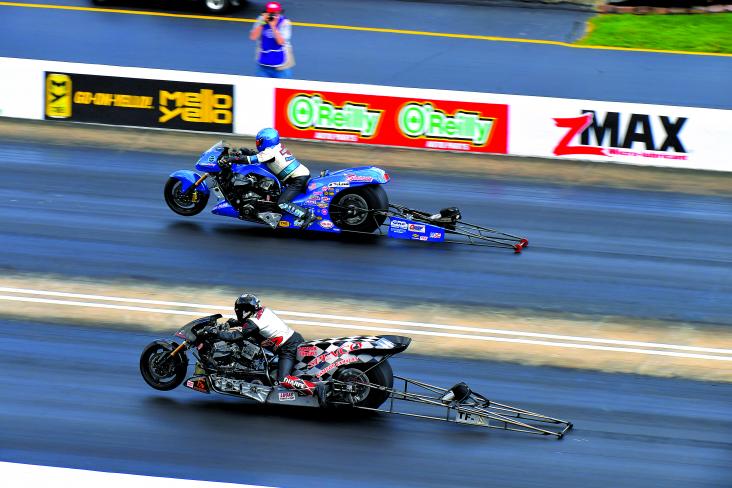 The pressure of defending his title did not stop him from accumulating nearly the same number of points, despite pressure from three Jay Turner Racing teammates (including Turner himself, who won the 2017 title) and Vancil. Tharpe won in Topeka, Bristol, and Epping; a three-race swing for the category that reasserted himself as the rider to beat.

He did so with a steady approach, something not attributed to motorcycles that exceed 230 mph and go quicker than 6.5 seconds on a regular basis. Thirty-six of his 59 runs went quicker than 6.5 seconds, a measure of success for any nitro-burning machine, but Tharpe did not feature the all-out, soul-crushing quickness that riders like record-holder Takeshi Shigematsu displayed when he went 6.101 in Gainesville. Tharpe’s quickest pass of the season was a 6.201.

Turner worked all season on making a supercharger work on his own bike, something that hurt his own competitiveness in service of the long-term health of the team and the category — if he can get it to work. Tharpe sees that as a potential future of the class; a quicker way to go quicker. If Pro Stock Motorcycle takes a refined look at performance, Tharpe wants to, in his own words, bring a sledgehammer. 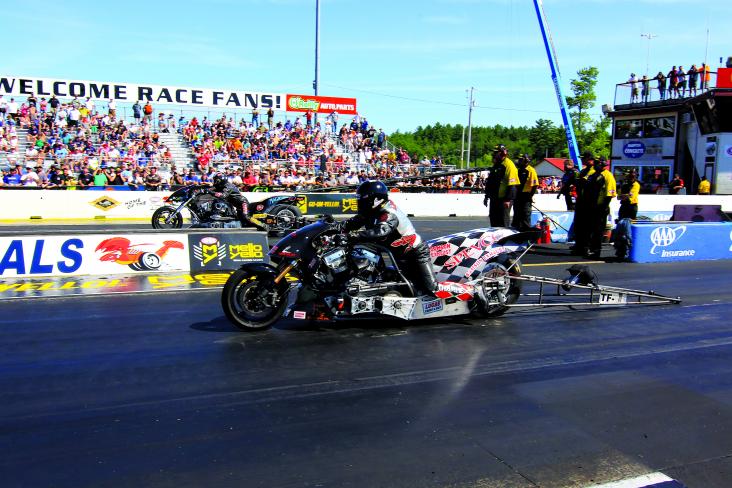 “The supercharger has not yet proven itself or been super cooperative,” said Tharpe. “If we can keep them alive and consistent, then it will be phenomenal. They’ve shown a lot of promise, but we’ll get hot and then kind of chase our tail a little bit. They’re just eating parts up right now, and we don’t want to be like a true Top Fuel or Funny Car where we’re making this a $1 million a year deal.”

So, now what? Tharpe is a two-time world champion, and Jay Turner Racing stands at the top of the mountain in Mickey Thompson Tires NHRA Top Fuel Harley, though by a slim margin. The class, while established, is at a crossroads, and Tharpe, like Turner, is thinking about where to take one of the best entertainment products as a new decade descends on NHRA Mello Yello Drag Racing.

“The schedule is really going to help next year, and I think you’re going to see car counts go up as a result, and that should make performance go up and elapsed times go down,” said Tharpe. “You kind of need to be where your competitors are, and being that we’re still an eight-bike field, I think where we’re racing makes sense.”

Tharpe hopes the improving competition continues to attract racers to pack up their motorcycles and travel to NHRA events as much as he’s aware location matters. Yes, he wants to threepeat in 2020, but he wants to do it by taking on all comers; if he’s going to continue to be the best, well, he and his trusty sledgehammer are waiting.