By a final count of 2-1, Mike Finnegan was declared the winner over rival Jarrad Scott in the “Gass-o-Ween” match race held during this weekend’s Dodge NHRA Nationals presented by Pennzoil. After a decisive win on Friday, Finnegan won the second round on Saturday after Scott red-lighted. The duo decided to continue the rivalry with a third run Saturday afternoon where Scott earned an impressive victory to make the final score 2-1. 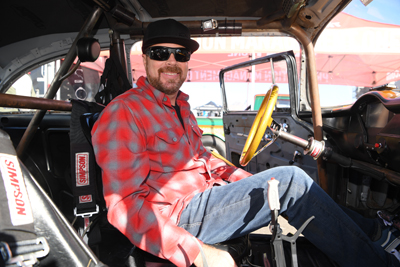 “I think that Jarrad thinks he won because he got to the finish line first, but only because he red-lighted against me,” Finnegan joked. “I think we both got a little over-anxious because we obviously want to beat each other badly. I made a change on my car; we tried a smaller pulled and it really didn’t seem to like it.”

“We made some more progress on that run, but then there is that red-light thing,” Scott said. “We did give the fans a great race, though. We were side-by-side and that was really cool.”

The final run was perhaps the best of the match. Finnegan left first with a solid .026-second reaction time in his Blasphemi ’55 Chevy, and held an early lead against Scott’s Bitchen ’62 Ford Ranchero. Scott made up the difference and crossed the finish line stripe first with a career-best 8.604, 159.14 to edge Finnegan’s consistent 8.682, 154.40. 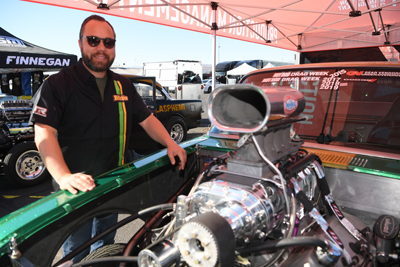 “That was more like it,” said Scott. “We came in here and made the two best passes we’ve made with this car, and we were able to get a win against Mike. We had a lot of fun and put on a great show for the fans. This was my first NHRA experience and we had a great time.”

Finnegan and Scott are both veterans and past winners of Hot Rod Magazine’s Drag Week, a unique event that combines nearly 1,000 miles of highway driving with five days of drag racing competition at four different drag strips. Competing in the A/Gas class, reserved for early-model iron, Finnegan won with an 8.80-second five-day average and Scott was second in class with a 9.04 average. Both racers successfully completed the grueling highway portion of the event.