Jim Head is back in Top Fuel (sorta)

Jim Head ran Top Fuel for years before switching to Funny Car. so why was there a Top Fueler in his pit spot this morning? Relax, fans, Head is just helping out his old pal Chris Karamesines while he also works on his own Funny Car, with Jonnie Lindberg back behind the wheel this weekend.
21 Jun 2019
Phil Burgess, NHRA National Dragster Editor
Race coverage

Watching fans walking past the Jim Head Racing trailer in the pits, it’s fun to see them do a double take when they see the backend of a Top Fuel dragster taking up the spot usually reserved for Jim Head’s Toyota Funny Car.

After seeing Head’s Funny Car, normally piloted by Jonnie Lindberg, driven by Jeff Arend in Topeka and Blake Alexander in Bristol last weekend after skipping the Chicago event altogether, nothing is surprising anymore.

But have no fear, Head/Lindberg fans, the duo are still together – and reunited this weekend – and the dragster belongs to the sport’s longest-running still active hero, Head’s longtime friend Chris Karamesines, whose Lucas Oil dragster was being fitted with one of Head’s Funny Car engines.

“We pit next to each other every race he runs, and I’ve watched him struggle race after race with his own stuff, and me and a lot of other people have been over into his pits trying to help out, but I finally decided it’s easier for me to put one of my engines in his car than do that,” said Head. “It’s not really always about someone having a bad tune-up; it; really about the parts. You have to have good parts, and everything has to be put together right.

“You’ve got change the tune-up pretty dramatically – the timing curve, the clutch curve … a whole lot of stuff. The way that Top Fuelers and Funny Cars are set up is really different for the first 400 feet. It’s been a long time since I’ve run Top Fuel [2003], but I think I can give him some starting points.”

It was at this point that "the Greek" walked in, and in a grandfatherly way, handed us each a Werther’s Original hard candy, and waved off any chance of a real interview.

“He’s just trying to make a point that he can make the car run and I can’t,” he said good-naturedly, and walked off. 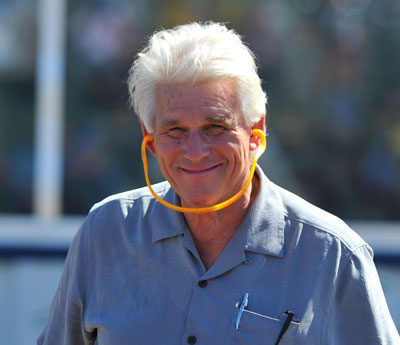 Once “the Greek’s” car was outfitted and readied and turned over to crew chief Dennis Swearingen and team, Head and crew could turn their attention to the Funny Car for Lindberg, who is back in the saddle after finally receiving his resident alien certification to return to the United States from his native Sweden, which left Head semi-scrambling for replacement drivers for the Topeka and Bristol events. (“I always have an ‘A’ plan, a ‘B’ plan, and a ‘C’ plan,” he said. “The only person who is not going to drive my cars is [me].”)

“It’s great to have Jonnie back, not that I didn’t enjoy having Jeff and Blake drive the car,” said Head. “Jeff was already a known quantity to me to I knew he’d do well in the car, but I didn’t really know Blake from Adam before last weekend. He approached me maybe 10 years ago to drive my car and I told him I didn’t need a driver, I needed a business partner. I was very impressed with him and what he’s become. I like him. He’s going to do fine. He’s very serious about this and I respect that tremendously. He’s real people.”

This weekend will be another chance for Head to get his car back up to the potential it show in 2018 before NHRA changed the track prep and threw Head’s tune-up for a loop.

“It really busted my ass,” he admitted. “Last year I just couldn’t make the car run so we did some clutch experiments and that made it worse so I brought out a whole new clutch system this year in Houston that’s showing some promise. I’m pretty pleased. It hasn’t gone real quick – I think .96 is our best run – but I think it will get to where I want it.”

Head and Lindberg will sit out the next four races after this event – though Lindberg will continue tuning Brian Hough’s Alcohol Funny Car, which has been to the winner’s circle twice already this year – and then return to the tour in Brainerd, when the weather and track conditions cool more to his liking.

But he’ll stay in Funny Car, despite having that dragster in his pit space.

“Funny Car is a bad-ass class, if y’all hadn’t noticed,” he said. “In Top Fuel you’ve got three, four, five cars that run really good; in Funny Car it’s 10 or 11. It’s really tough but I like the challenge.”