Jianna Salinas laughs now, but she remembers with a bit of trepidation the first time she actually sat on a Pro Stock Motorcycle. Exactly one year ago at Gainesville Raceway, Jianna, the youngest daughter of Scrappers Top Fuel driver Mike Salinas, got a chance to sit on a Pro Stock Suzuki owned by Gary Stoffer and Greg Underdah. The results were, not what she expected.

“I fell off the bike,” she laughs. “Seriously, I was just sitting on the bike for the first time. Before I ever got to ride, we pushed the bike around just so I could get a feel for it. I’d never sat on a bike like that and I wasn’t exactly sure where to put my feet and I fell off. I was embarrassed but we kept going. It’s funny to think that was a year ago.”

Although she rides a street bike, Salinas, who is in her Junior year at San Jose State University, had no prior experience racing a motorcycle. Over the past 12 months, she has spent many days at dragstrips all over the country, learning how to ride an often-demanding 190-mph Suzuki. Taking a cautious step-by-step approach, she first learned to master the burnout and staging procedure. Later Salinas made runs to half-track and when she was ready, she got the green light to hold the throttle open to the finish line. Her teachers, Gary Stoffer and Greg Underdahl, monitored her progress and each time they felt she was ready, they gave the bike more power and let the 21-year old assume more responsibility. She earned her competition license late last year and got to test on her race bike, a Vance & Hines powered Suzuki, a few weeks ago. 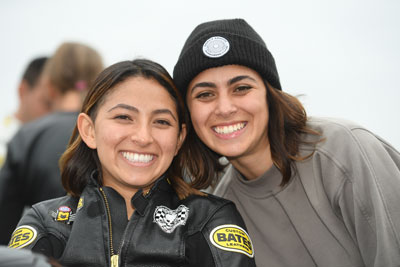 Fast forward to the 50th annual Amalie Motor Oil NHRA Gatornationals and Salinas, like her father, is now a professional racer in the NHRA Mello Yello Drag Racing Series. She's also joined by older sister, Jasmine (right), who qualified fo the tough Top Alcohol Dragster field. She expects to compete in all 16 Pro Stock Motorcycle races and she’s likely to be nominated for the Auto Club Road to the Future award which recognizes the series’ best rookie racer. Salinas ran a career best 7.092 but came up well short of the bump spot. Asked to grade her performance, Salinas was brutally honest.

“One a scale of 1 to 10, I’d say that was probably a five,” she says. “I did some good things and did some bad things. I knew coming in here that I couldn’t expect to win my first race, but I did want to make good runs. I know I’m a new rider and I’ve still got a lot to learn. I just want to make sure that I keep learning and this weekend, I definitely learned a lot.”

One thing is certain; Salinas isn’t afraid of the bike. On her first run, she made a move towards the retaining wall but never rolled the throttle. It might not have been the best decision, but she never felt as though she was in danger. She kept the bike off the wall and got it stopped safely.

“It’s a little strange, but I think I’m very comfortable with this bike,” said Salinas. “I knew the bike wasn’t going straight but I felt like I could stay with it. I didn’t think it was too bad. I really wanted to qualify, but I just need more seat time. That’s been our plan from day one. We’ve tried to take this one step at a time and not do anything that I’m not ready for.”

Underdahl, who went to a pair of national event finals as a rider and has mentored numerous other aspiring pros including his son, Jimmy, was also honest in his assessment of Salinas’ debut.

“She made a couple of mistakes, but I don’t want to hammer on her too hard,” said Underdahl. “I’m impressed with the fact that she’s very aware of what is going on with the bike.  She hits all the shift points but the biggest thing is that she listens when Gary [Stoffer] and I give her input. Some riders are a big hard-headed. They don’t like to take direction. Over the last year, we’ve gotten to know Jianna very well and we’re very impressed with how coachable she it. She just needs to keep concentrating on making clean and straight runs.”

Salinas has also got a strong mentor in Stoffer’s wife, Karen, who has raced in more than 200 events on a Pro Stock Motorcycle and understands the thought process that accompanies each run. Salinas is also happy to take direction from her father, Mike, who is someone else who fully understands the learning process that goes with becoming an NHRA pro racer.

“Dad is extremely supportive of me and my sister, [Jasmine, but he’s not afraid to tell us if we make a mistake,” Salinas said. “This race was big for us because we’re here racing as a family and I know that means a lot to him to have his daughters out here with him. I just want to make him proud.”