Teams wrapped up the first weekend of qualifying in the NHRA Countdown to the Championship at the Mopar Express Lane NHRA Nationals presented by Pennzoil. Here's what they had to say ahead of race day.

“I thought where we stood Friday night was going to be pretty good and if we could match that I’d be pretty happy. What we just did right there, that was unbelievable.

“That run was just outstanding. It felt fast. It was smooth, it was clean. It felt like it stayed straight in the groove and I was just hanging on. The end of the track came a lot quicker so I knew we were on a good run and they didn’t tell me the numbers until I got down on the top end so it felt good,” said Force who is the first female in 42 years to secure three consecutive No. 1 qualifiers. “I knew before I even got in the car. In the staging lanes Grubnic jumped in our Chevy Suburban tow vehicle and had a conversation with me and Skylar Blades on my team about what the plan was, what we were going to do and how we were going to set a record. He told me to hang on and to get the car down there, and we’d be pretty surprised on the other end. And I was. I did not think a .62. I didn’t ask him for a number but he said if we get down there it would be an awesome run and we’d set some records so it felt good to do that. Especially coming into this Countdown right now. This is exactly where I want to be, we’re picking up bonus points, we picked up nine this weekend and tomorrow we’ll be ready for race day.”

“Well, I gave up some points in qualifying because I got over on the cones last night but we found the problem and changed chassis and fixed it. ‘Old Blue’ I call it. We’ll see what we can do tomorrow in this hot rod. All of us are in the show tomorrow and it’s the Countdown. I’m excited to see what we can do and hopefully get all of our sponsors in that winner’s circle tomorrow.”

“We didn’t make terrible runs today but it sure wasn’t what we were looking for. The clutch didn’t cooperate so I wish we had one more run to do it again but we don’t,. It’s going to be different conditions tomorrow and honestly; I think we can leave it alone exactly how it is and it will run the same when it’s hot. I think we have a good set up for race day.”

“It was a little slow in the first run but we had a decent go in the second before we ran into a problem. We had some parts let go so it made a lot of work for us tonight. We have work to do to get ready for tomorrow morning but I know we’ll be ready. I get to race my buddy Jordan Vandergriff and it’s going to be a big moment, two Rookie of the Year candidates trying to get round-wins over each other. I hope we can get it done and go some rounds in this Countdown. An early exit at Reading is never good, this is the easiest time to make up ground, its’ tightest points wise so we have to have a good day tomorrow and at least go to the semifinal if we want to be in contention for this championship.” 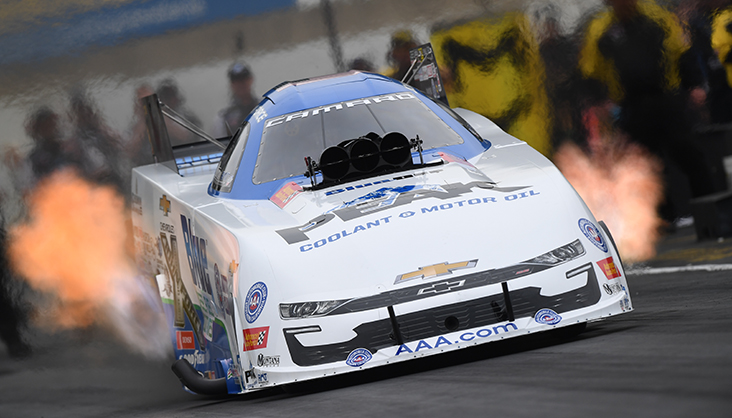 "That first run today was about what it should have done last night. It was pretty close last night, so we [dialed it] back a little bit for the third run. It worked.

"I tried to tune it up for that last run, and it had none of that. I had it too tuned up last night. Just came backwards a little bit to get it down the track. We just need to make the thing go A to B tomorrow. We can't take him lightly, but we have to make the thing go."

“We feel great going into race day,” said Capps, who raced to the Reading winner’s circle in 2017. “Starting from the No. 1 spot today allowed us to test a little bit in Q3, and then typical Rahn Tobler, we went back up there for Q4, and he’s looking at points. We were surveying what everybody ran, and he was waiting to see what the quickest run was in front of us. We saw Bob Tasca run a 3.86 and we thought we could outdo that, but Tobler wanted to make sure we didn’t lose the run. We did a little test mode on Q3, and it shook, so I’m sure that Q4 run was him just getting down the track.

“Sunday is going to be such a different day; sunny, mid-80s, it’s going to be similar to what it’s been the past two years here,” remarked Capps of the drastically different weather conditions forecasted for race day. “But, I always brag about Rahn Tobler and his NAPA Know How, and how he is so good at adapting to conditions, and we’ll need every bit of his adaptability tomorrow. If you walk around the pits right now, you’d see a lot of parts coming off of cars and changes being made because the conditions will be so different than what they’ve been all weekend.”

"We’re getting off to a great start, and that’s the key. Our Matco Tools Toyota boys, we came in here and we were bold. We tried some different stuff and it worked out for us in Q1. In Q2 and Q3 we were way over-aggressive, so we backed it off in Q4 to make it down the track. We feel really good going into race day, we’ve just got to take it one lap at a time and get after it.”

“After yesterday’s wild ride in Q1, I nicknamed this car Katniss Everdeen from The Hunger Games. I think that’s fitting. Everybody is out for themselves in the Countdown. This hot rod, she showed that she’s hungry and we’ve been letting her eat, putting down three solid passes, and tomorrow is the first round of The Hunger Games.”

"The Infinite Hero machine was moving over toward the wall during the last qualifying run, and we don’t need to bang up anything there, so I clicked it early. I like our shot. We still have a good E.T., and we’ve got great data to go on. We went zero for two on Friday, and as far as I’m concerned, two for two on Saturday. Now it’s time to go four for four on Sunday.”

"We won’t have lane choice, but it never matters if you don’t have it. This MOPAR Hellcat Widebody has been running pretty good. We’ve had three out of our four runs be very consistent – running 90s pretty much every time, so things look to be pretty equal. So, unless something major happens or the weather changes drastically, I think we’ve got a pretty solid hot rod to at least get down the race track and give it a good shot.”

"We’ve got a really good Dodge Charger SRT Hellcat. We tried some stuff in that last qualifying session just to see if we could get away with it. Now we know that didn’t work. We’ve got a good consistent car, and that will go far tomorrow. I think conditions will be different tomorrow, and having a consistent car is what you are going to need. We’re excited about this being a MOPAR event and happy to have all the FCA executives out here with us. It worked out well for us in Denver, and we’re hoping to have the same results here tomorrow. A consistent car might be the thing you need in those conditions.”

"We started the weekend with some great cloud cover, cool temperatures and a little mist and everyone ran great. It stayed misty and cloudy today but warmed up a bit so we all slowed down just a touch. Relative to the field we stayed strong, and even led the last round, so all that's very encouraging. It's supposed to be a bit warmer still tomorrow so we'll need to stay on our toes, but I know we'll be ready to race."