Casual NHRA fans might not be familiar with Scruggs, but in the rough and tumble world of eighth mile doorslammer racing he’s nothing short of a legend. Soft-spoken and easy-going, Scruggs hails from Elvis Presley’s hometown of Tupelo, Miss., where his family operates a large farming operation among several other successful, yet time-consuming businesses. On the dragstrip, Scruggs is a two-time champion in the old ADRL series as the undisputed king of the now-defunct Pro Extreme class, a no holds-barred style of eighth-mile racing where full-bodied cars look and act like nitro Funny Cars. 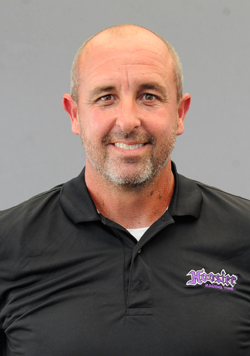 More recently, Scruggs has turned his attention to the NHRA E3 Pro Mod Series for no other reason than he loves competition and wants to test himself against the best that NHRA has to offer. Scruggs made his official debut a year ago at Indy, and in limited appearances, he’s been able to hold his own. Heading into Sunday’s final qualifying at Indy, he’s the ninth-quickest qualifier in the Pro Mod event presented by Hot Wheels with a 5.795. And, he believes he’s just scratched the surface of the potential in his new Jerry Bickel-built Camaro.

“This the first race with this new car so I feel pretty good about what we’ve done so far,” said Scruggs. “We tested here in Indy last week and ran 5.78 and it was a lot warmer than it is this week, so that tells me there is more left. I’ve got the best stuff from [engine builder] Joe Hornick and we run the Chuck Ford blowers. We’ve got everything we need to win. When we ran that [5.79] on Friday night we changed engines because we thought we had another one that would run better, but that wasn’t the case yesterday. I think the air got better and we just missed the tune-up. The new stuff has a different power curve, so we’ve got to manage it.

Therein lies the trouble for Scruggs. As much as he’d love to compete for the season championship in the E3 Pro Mod series, he doesn’t see that happening anytime soon. Like most farmers, Scruggs doesn’t operate by a time clock. He works from dawn until the job is done, which means that race weekends are few and far between. His original scheduled called for up to six of the 12 Pro Mod events on the schedule, but to date, he’s made just three, with plans to finish his season in St. Louis later this month.

“It’s rewarding to come over here to NHRA, especially if we have some success but the only downfall is that we need to focus on business at home,” Scruggs said. “We have 28,000 acres and we grow mostly soybeans and cotton. We also build houses and have a retail store. It’s hard for me to leave, so when we go, we have to go to win. As much as I’d love to come over here and race for a championship, I don’t see that happening. With the current schedule, it’s almost impossible because there are so many races in May and June and those are our busiest months.”

When it comes to comparing the not-so-subtle differences between eight-mile Outlaw racing and NHRA style quarter-mile Pro Mod, Scruggs is quick to admit that both have their own unique challenges. His Outlaw car was about three-tenths quicker to the eighth-mile than his current Bickel car which doesn’t sound like much, but with over 4,000 horsepower and no minimum weight, the Outlaw car often had a mind of it’s own.

“This [NHRA car] is slower than what I’m used to but that doesn’t mean it’s not a handful at times,” Scruggs said. “The quarter-mile thing is an adjustment and you’ve really got to pay attention downtrack. I can’t say that I like one more than the other. For me, it’s a thrill to compete. This is where the toughest racing is because there are so many good cars here. I want to be able to race against the best which is why we came here. We already know we can run 5.7s and I think we can run a little better if we make a decent run. After that, I just need to have some decent lights and then have some luck.”

Scruggs also enjoys the relative anonymity he currently has at NHRA races. In addition to being a star attraction at PRDA races, he was a part-owner of that association, which means he had responsibilities that went far beyond just driving the race car. Here at Lucas Oil Raceway, Scruggs’s plain white trailer is parked on the West side of the track, far away from the Mello Yello series nitro teams.

“In a way, it’s a relief to be out here,” said Scruggs. “With PDRA, because I was an owner, it got to where I had pressure to go to the races and support the series even when it wasn’t the best move to do so. We decided that it was best to take a step back so we could enjoy racing again and we’ve done that here. Funny thing about NHRA; we heard a lot of stories before we came here but we’ve had a great time and I can’t complain about the way we’ve been treated. It’s been a great experience.”