Everyone knows that the start of a drag race is one of the most important parts of a winning recipe, but that also applies to the season as well. There’s nothing quite like a win at the season-opening Winternationals to jump-start a season. Here’s a look at the five six most successful drivers in Circle K NHRA Winternationals history. 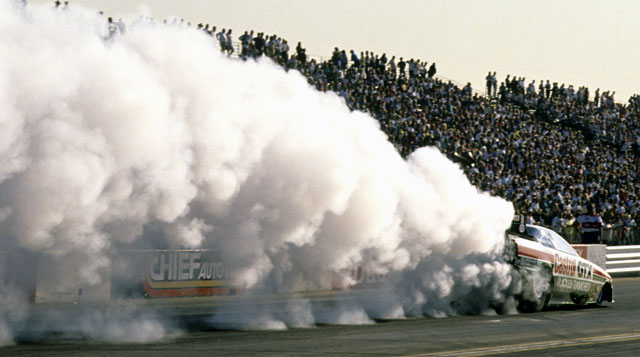 Drag racing’s winningest driver also co-holds the record for most Winternationals victories with seven, and five of them (1991, ’93, ’97, 2002, '10) led to season championships. Interestingly, the 16-time champ didn’t break into the Pomona winner’s circle until he had already won his first championship. After winning the season title in 1990, Force opened his title defense by winning in Pomona, stopping Glenn Mikres in the 1991 final. After finishing as runner-up to Jim Epler the following year, Force returned to the Pomona winner’s circle in 1993, stopping young Del Worsham in the final. Force added another Winternationals crown in 1997, reversing the outcome of the 1996 final by defeating nemesis Al Hofmann. It took five years to add another win, when he took the 2002 title, again from Worsham, and a stunning eight years before he scored in Pomona again, besting Ron Capps for the 2010 win. Since then, Force has been on an every-other-year roll, winning in 2012 (over teammate Mike Neff) and in 2014 over Matt Hagan, setting himself up for a possible 2016 win. 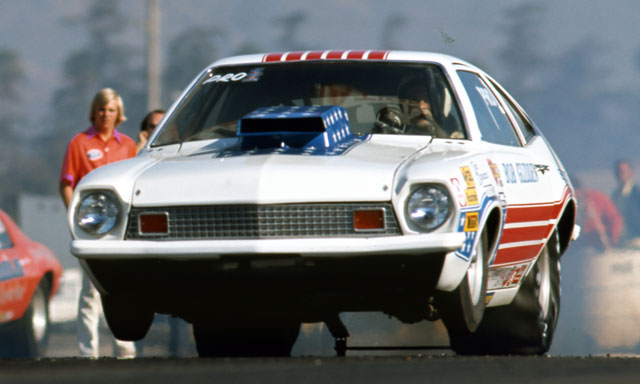 Pro Stock icon Glidden also collected seven Winternationals wins, and, as for Force, five of them (1975, '78, '79, ’85, and ’89) led to world championships. Glidden’s first two Winternationals wins, back to back in 1975 and 1976, both were at the expense of his preliminary rival at the time, Wayne Gapp. The 1975 win came in his short-lived, long-wheelbase Mustang, and the 1976 crown and 1978 win (over Larry Lombardo) were with his familiar Pinto. One of Glidden’s rare non-Ford wins came at the 1979 season opener in a Plymouth Arrow, with which he took down Joe Satmary’s big-block Camaro in the final. Glidden wheeled his famous Ford Fairmont to the 1981 win over Pat Musi and scored in 1985 with his Chief Auto Parts Thunderbird, stopping Warren Johnson in the final. Glidden’s final Pomona score came at the 1989 event, with his Motorcraft Ford Probe over final-round opponent Frank Iaconio.

“Big Daddy” claimed his first Winternationals win in Top Fuel at the 1963 event with his winged Swamp Rat V dragster but wouldn’t win the Big Go West again until 1971, in the debut of his rear-engine dragster, when he defeated Kenny Safford in the final. Garlits took down Dennis Baca to win the 1973 event and Dave Settles to capture the 1975 crown. It took 12 years and a career resurrection for Garlits to earn a fifth title, in 1987 with a final-round defeat of Joe Amato. 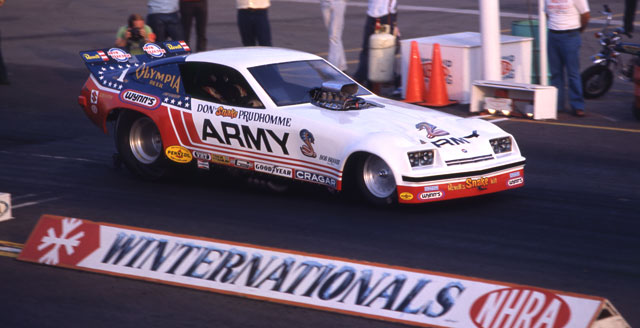 “The Snake” first struck for Pomona victory in 1965 at the wheel of Roland Leong’s Hawaiian Top Fueler in what also was his first of 49 career wins. It would take a decade and a switch to Funny Car before he would win again in Pomona, wheeling the Army Monza to the 1975 victory over Mike Miller to begin a four-year stranglehold on the event. He drove the Monza to victory over Ed McCulloch in 1976 and his Army-affiliated Plymouth Arrow to wins in 1977 (over Raymond Beadle) and 1978 (over mentor Tommy Ivo). The last four Pomona wins all kicked off championship seasons. 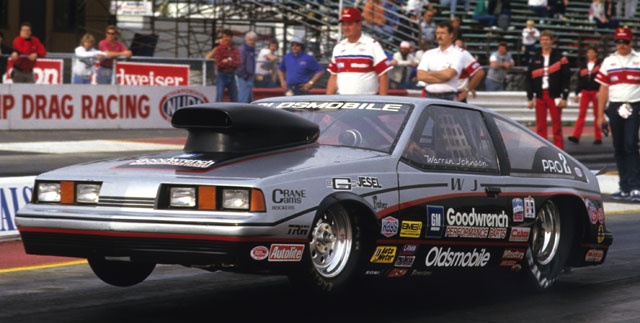 After back-to-back runner-ups in 1985 and 1986, W.J. finally got on the scoresheet in Pomona when he drove his GM Goodwrench Olds Firenza past Butch Leal in the 1987 final. He added a second tally in 1993, beating Scott Geoffrion for the win, then won again the following year with his Olds Cutlass over Darrell Alderman’s Dodge. Johnson’s 1997 Winternationals victory was especially memorable because it came after a final-round conquest of his son, Kurt. W.J.’s final Pomona win came in 2003 in his GM Performance Parts Pontiac.

Greg Anderson didn’t win his first Winternationals until 2004, at the wheel of the Vegas General Construction/KB Racing Grand Am, when he stopped his former boss, Warren Johnson, in the final, but he dominated the event the rest of that decade with his Summit-backed Pontiacs. He three-peated with respective wins from 2006 through 2008 over Mike Edwards, Greg Stanfield, and Jeg Coughlin Jr. and added a fifth win in 2012, when he again beat Coughlin in the final; the first two were in GTOs and the last two in GXPs.