The Circle K NHRA Winternationals is known for many things. It’s the annual season opener, where new cars, sponsors, and paint schemes famously debut. It can also be one of the most scenic venues on the tour when snow caps the mountains behind the facility. But throughout the years, the event also has been host to some of the wildest rides in the sport’s history. Here’s a look at five of the more memorable ones. 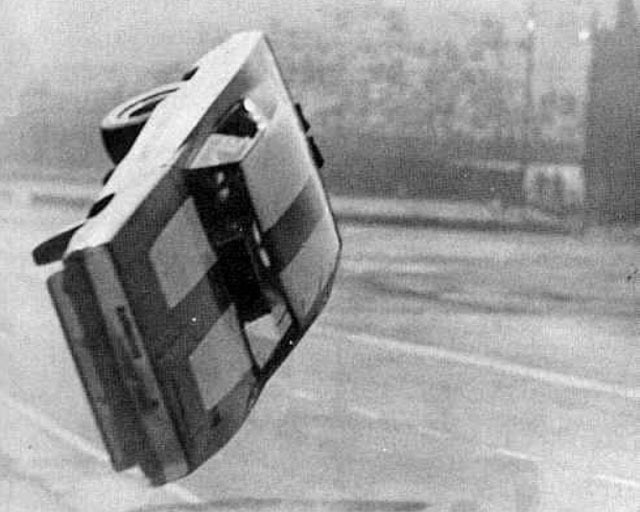 The Funny Car class made its Winternationals debut at the 1969 event, and it was memorable for more than just Clare Sanders’ win in “Jungle Jim” Liberman’s Chevy. In qualifying, Roland Leong’s Hawaiian Dodge Charger, driven by Larry Reyes, took flight at the finish line. Funny Car body science at the time was mostly a “try it and see” approach, and Reyes remembers he didn’t like what he saw. "As soon as I got into that car, I didn't like it," he told me. "I said to myself, 'What have I done?' The car was too big, and I couldn't see out of it. The braking system didn’t work; it wouldn’t steer or turn.”

In round one, the car got loose in the lights, and the rear end came around. Reyes had avoided a nearly similar incident in qualifying by quickly deploying the chute, but this time, there was no saving the car. It swapped ends and became airborne and flew an estimated 200 feet through the Pomona shutdown area. It landed on its lid, slid for a moment on its roof, then rolled a half-roll and landed on all four wheels and jettisoned the body into the SoCal sky. Reyes was, as Bond would say, shaken but not stirred. National Dragster Production Manager Lane Evans shot this iconic photo of Reyes and the Hawaiian taking flight in the lights in Pomona. 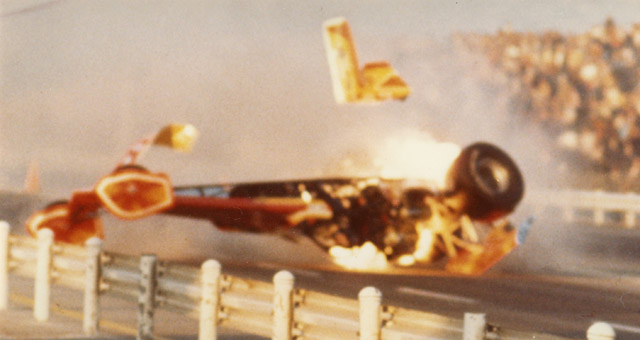 Dragster veteran Ivo pulled to the starting line late Saturday, Feb. 2, in a beautiful, new Sikora Bros.-built orange and yellow fueler with front wheel pants for his final qualifying pass. Ivo had been forced to shut off his car on the qualifying run before his final pass when the oil-pressure gauge registered just 40 pounds, and with time running out, he hustled the car back into the staging lanes and, as was often the procedure back then, whipped the oil pan off right in the lanes to check the bearings. Everything looked fine, and the oil pressure had returned, so the crew buttoned the car back up for the final attempt.

“It ran like a striped-ass ape to about 1,200 feet and turned into a ball of fire as it made little pieces out of big pieces throughout the engine’s bottom end. I started skating on the oil puking out of the pan, which by this time looked more like a piece of Swiss cheese than sheet metal, so I lifted.”

As Ivo lifted, the combination of engine torque, no downforce, and oil under the rear tires turned the car hard right toward the guardrail and began a sequence that sent Ivo upside down and backward across the finish line at more than 200 mph.

The good news for Ivo was that the run, a strong 6.05, was enough to push him well in the field, up to the No. 5 spot, but he was obviously unable to make the call for eliminations. 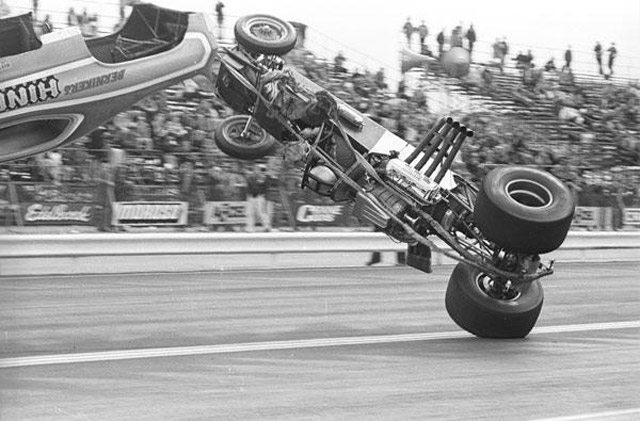 Rear-engine Funny Cars had a checkered history in the sport. Only one – Jim Dunn’s 1972 Barracuda – ever won a race, and most of the ill-handling brutes ended up wrecked, including Burt Berniker’s Hindsight Duster, which backflipped spectacularly during qualifying at the 1975 Winternationals with Geisler in the seat.

"The track was good, and the engine was running a little better than we thought,” said Geisler. “It just hooked up too good. With those cars, your eye level was on the hood, so when the car left the starting line with the front end up, you'd lose your horizon, even if it was only 6 or 8 inches up, and you'd have to look off to the side to see where you were. That's what happened on that run. By the time I realized it wasn't coming back, it was already up to a 45-degree angle."

The car was heavily damaged in the crash and never rebuilt. 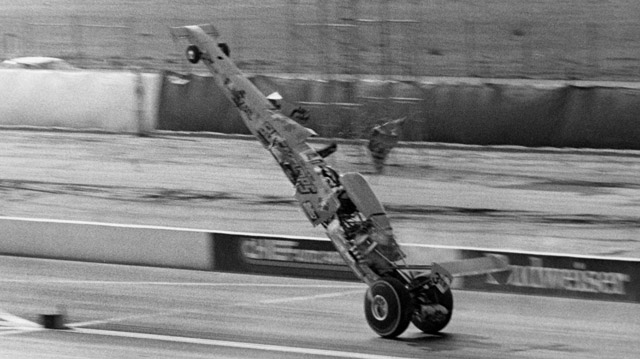 Hill’s 1988 season had been a spectacular one. He had become the first Top Fuel driver to run in the fours and had won four NHRA national events, but his 1989 season got off to a flying start of the wrong kind. In Friday qualifying, his entry took flight near the finish line after a front-wing failure and flew several hundred feet through the shutdown area. Hill's incredible top-end flight occurred at the end of a 5.210, 236.15 run, the lowest elapsed time and fastest mile-per-hour turned in the air, and it left the fabled first-in-the-fours Super Shops dragster in ruin. Except for the roll cage and driver's compartment, the car was destroyed.

"It happened so suddenly it was out of my hands,” said Hill. “Once I started crashing, I covered up my pretty parts [face] with my hands and closed my eyes.”

As horrendous a crash as this was, Hill returned to qualify Saturday with a backup car borrowed from Darrell Gwynn, who, ironically, also was his scheduled first-round opponent, but Hill was not able to make the call after discovering a crack in his lone engine block.

Joe Amato and Bernstein left almost as one in the 1993 Top Fuel final and roared downtrack, but no one could see into the thumping aluminum insides of Bernstein's mighty mill, which was beginning to cannibalize itself even as he built his lead. Just as his red and white racer reached the half-track timers, the No. 2 connecting rod, in the right front of the engine, broke, sending a torrent of oil onto the racetrack and the car's rear tires. One broken rod led to another and created a hole on the other side of the block.

As his car neared the 1,000-foot clocks, debris from the engine punctured the left rear tire; at almost the same instant, the rear of his machine lit up in a huge fireball, and the car made a sudden turn to the left. Bernstein corrected, but the car turned the other way and was in a sideways drift through the timing lights at 221 mph. Still fighting for control, he slid across the centerline behind Amato and appeared ready to go head-on into the guardrail before the car swung 180 degrees in a fraction of a second and backed into the rail. On impact, the car flew in the air, spun around again, landed on the other side of the rail, turned sideways, pitched the engine out of the car, and rolled once before stopping right-side up facing uptrack.

Bernstein temporarily was unconscious but otherwise uninjured. Amato made his way back to the wreck site and hugged Bernstein as the latter was being assisted to a stretcher.

"I told him that wasn't the way I wanted to win, and I would rather he had won if it meant him not crashing," said Amato.