Five feats yet to be accomplished

With more than 60 years of competition, you would think that we had seen it all when it comes to accomplishments in NHRA Drag Racing, but here’s a quick list of some items yet to be accomplished, ranked in order of possibility. 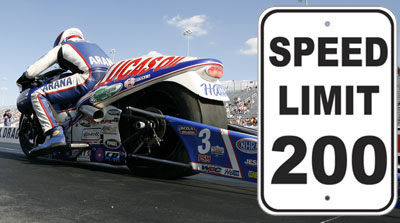 200-mph Pro Stock Motorcycle run
Since 2012, riders in NHRA’s Pro Stock Motorcycle class have closely flirted with what may well be the sport’s last major performance barrier: a 200-mph run. Early last season, Hector Arana Jr. rode his Lucas Oil Buell to a tremendous 199.88-mph national record clocking at zMAX Dragway during the NHRA Four-Wide Nationals, and his father, Hector Sr., clocked a speed of 199.35 in Englishtown later in the year. Both of the Harley-Davidson riders, Eddie Krawiec (199.26) and Andrew Hines (199.23), have also been within striking distance of the double-century mark. In all, there have been six 199-mph passes, and with the right weather and wind conditions, the barrier could easily fall this season. 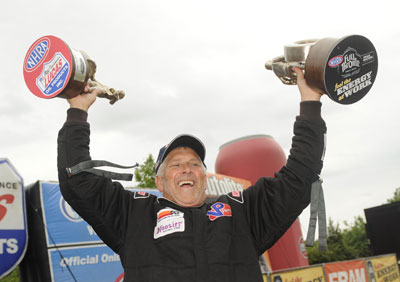 David Rampy has four career doubles, plus a near miss in Indy
Indy double
Thirty-two times at 15 venues, a select group of NHRA drivers have been skillful and fortunate enough to win more than one eliminator at the same event, but it has never happened on the biggest of stages, the Chevrolet Performance U.S. Nationals. Maybe it’s that everyone brings his or her A-game to the race, or maybe it’s because of the size of the fields or the length of the event or the sheer weight of running for not just one but two titles at the sport’s grandest event, but it has never happened. We’ve gotten close – three times, in fact – but never gotten it done. Pat Austin was the first to just miss, winning Top Alcohol Funny Car at the 1991 event, then breaking on the burnout in the Top Fuel final; making it all the more frustrating for Austin, opponent Kenny Bernstein smoked the tires on his solo pass. Five years later, Scotty Richardson won Stock but was runner-up in Super Comp to Bill Yates. The most recent near miss came in 1998, when David Rampy won Super Comp but was turned away in the Comp final by David Cook Jr.

Likelihood: Inevitable, but who knows when?

A woman has won a world championship in each of NHRA’s Mello Yello Drag Racing Series classes with the exception of Funny Car. Ashley Force Hood has come the closest, finishing second in 2009 and third in 2010, but it has been a little dry since then. However, with drivers such as Alexis DeJoria and Courtney Force with well-funded operations and talented crew chiefs, this one also will inevitably come to pass, perhaps as soon as this year but more likely in the years ahead. Force finished a career-high fourth in 2014 but slid to 11th last year. DeJoria finished seventh in 2014 and eighth last year. Both drivers have proven that they have the skill to win national events; they just need to string victories together more often.

Likelihood: Inevitable, but probably not imminent

Pro Mod/Pro-class double
Although drivers are no longer permitted to compete in more than one NHRA Mello Yello Drag Racing Series class at an event, a driver can couple an effort in Top Fuel, Funny Car, Pro Stock, or Pro Stock Motorcycle with one in a Lucas Oil class or, more interestingly, Pro Mod. Pat Austin already completed a Top Fuel/Top Alcohol Funny Car double in Topeka in 1991 (just a few weeks after falling short in Indy), but the Pro/Pro Mod double is still waiting. Melanie Troxel probably had the best chance a few years ago when she was driving the national-record-setting R2B2 Pro Mod machine and a competitive Funny Car, but since then, only Khalid alBalooshi and Ike Maier have attempted it. 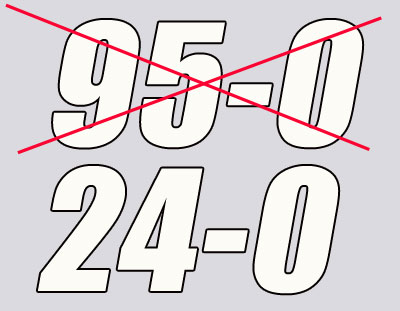 Perfect season Perfect Countdown
Don Prudhomme nearly pulled it off back in 1976, losing only one round all year, but then again there were only eight events. Can you imagine it – someone in the Pro classes going unbeaten in a season in the modern era? In Top Fuel, Funny Car, or Pro Stock, that would be a record of 95-0 (63-0 in Pro Stock Motorcycle). Ha-ha, whew. Good one, right? Not going to ever happen.

But how about a perfect Countdown to the Championship season? Winning all six races of NHRA’s playoffs would “only” require someone to win 24 straight rounds, and because as recently as 2008, Tony Schumacher won 31 consecutive rounds, it’s certainly possible. Just look at last year: Del Worsham won four of the six races en route to the championship and was 17-2; Antron Brown kicked off the 2015 Countdown with three straight wins and ended up going 19-3; Pro Stock champ Erica Enders also won three of the six races and notched an 18-3 record; and Pro Stock Motorcycle titlist Andrew Hines also scored three victories en route to a 15-3 playoff record. Still, even 19 wins seems a long way from 24 in the thick of a championship battle.