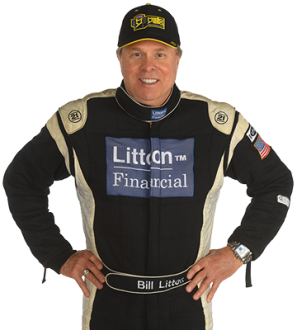 An accomplished aviator and firefighter, Litton was named firefighter of the year in 1982. His passion for flying is eclipsed only by the need for speed. Piloting a Top Fuel Dragster satisfies that need to excel. Litton was awarded the prestigious #1 plate in Motocross for the West Texas Circuit before ascending to drag racing in 2003. Bill got his start in Super Comp Dragster licensing with the Frank Hawley Drag Racing School in Gainesville, Fla.

In July of 2012, he became licensed in Top Alcohol Dragster under the instruction of Anthony DiCero. Litton’s 1st full season of Top Alcohol landed him a top 10 finish in division 3. He qualified for eliminations at the U.S. Nationals in Indianapolis that same year. In his home state of Texas, Litton won the coveted Wally among the fastest Top Alcohol Dragster field in history at the 2015 Dallas AAA Texas Fall Nationals. In 2017, Bill joined forces with former World Champion Randy Meyer, breaking the long-standing track record in Top Alcohol Dragster at the Las Vegas Motor Speedway.

Litton’s need to overcome obstacles carried over into the business world. In 1987, he started his own firm, Litton Financial, which he has led to a position in the top 1% of the largest independent investment broker dealers in the country.

Litton progressed into Top Fuel in 2015, licensing under the instruction of the legendary father son team and former world champions Chuck and Del Worsham. In 2016 and 2018, Bill was behind the wheel of the Worsham family’s Top Fuel Dragster, knocking out a few renowned drivers in elimination rounds.